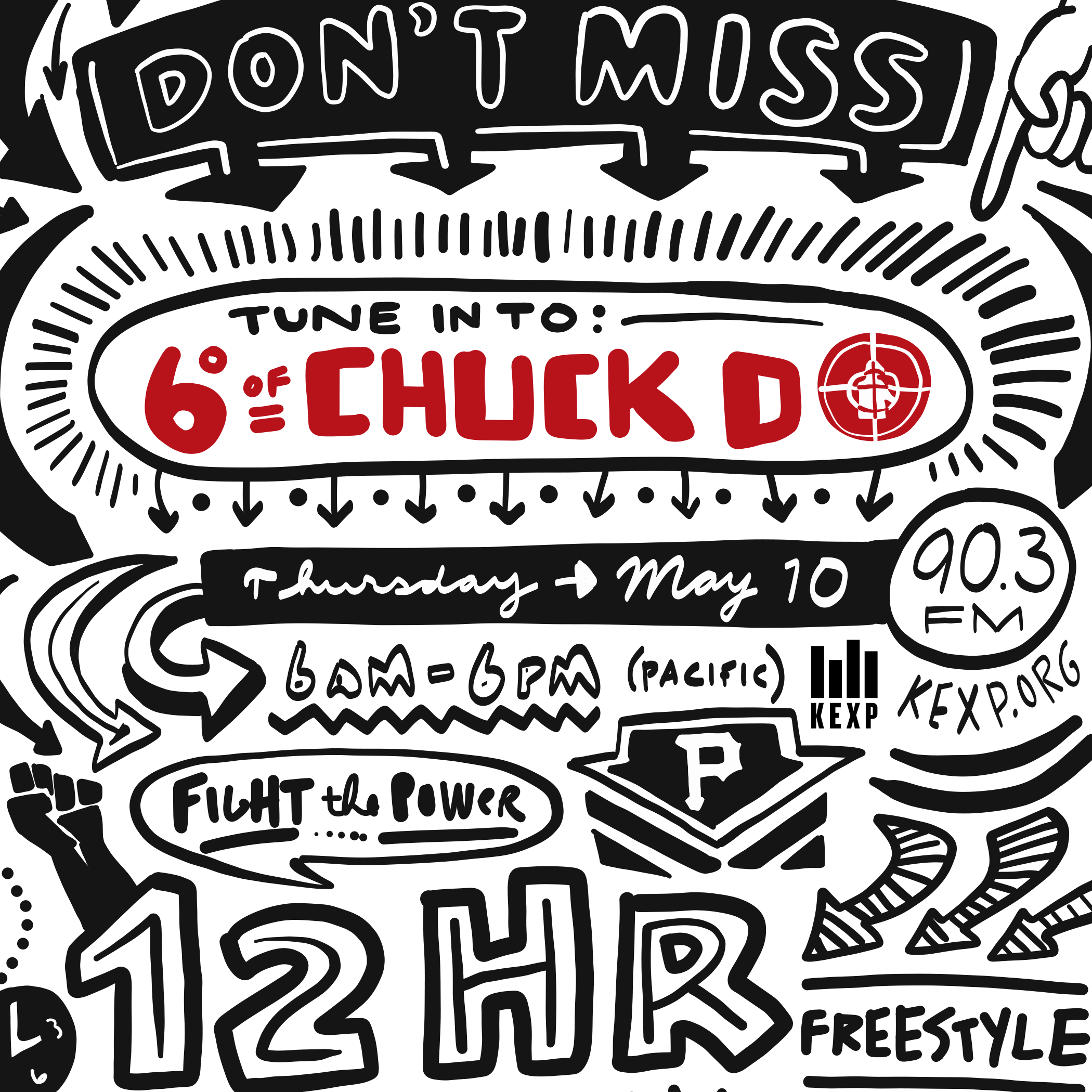 The 2018 installment of KEXP’s Six Degrees series examined the music of Public Enemy founder Chuck D. On Thursday, May 10th, KEXP presented a twelve-hour block of programming weaving between Chuck D’s many musical contributions and the wide circle of influence he has built throughout his storied career. The station also aired portions of an exclusive interview with Chuck D between sets.

Guest vocals, backing players, shared producers, and more: the connections between tracks are not pre-planned, and DJs will be thinking on their feet to come up with the next song, as they do daily on KEXP.

Only the first two songs for Six Degrees of Chuck D are selected. The day began at 6:00 AM Pacific with “War” by Chuck D, featuring Ambersunshower, followed by a collaboration between Ambersunshower and Tricky. Following that, DJs seek connections on the fly, always with the aim of returning to a song that features Chuck D.

This year, an additional degree of difficulty was thrown into the mix, in the form of KEXP’s ongoing Sub Pop Count Up. To celebrate the label’s 30th anniversary, throughout each day from March to August, KEXP had been playing a track from every single Sub Pop release in chronological order, averaging around 8 songs per day. This will continue during Six Degrees of Chuck D, so DJs will need to navigate a journey from the Public Enemy frontman to bands like Mudhoney and Beachwood Sparks, and back again.

In past installments of the Six Degrees series, KEXP has explored the careers of Chris Cornell, Sharon Van Etten, Greg Dulli, and Robyn Hitchcock. Six Degrees of Chuck D will be curated by KEXP daytime hosts John Richards, Troy Nelson, and Kevin Cole, who will be joined throughout the day by local hip-hop artists and DJs, including Gabriel Teodros, DJ Morgan, Adra Boo of Fly Moon Royalty, and more to be announced.

For over 40 years, Chuck D has proven himself to be a once-in-a-generation artist and thinker, from his time as a founding member of Public Enemy, through his current use of music as activism with Prophets of Rage,” says KEXP Morning Show host and Associate Director of Programming John Richards. “These Six Degrees days are always exciting, because you never know what’s going to happen, but you know you’re going to hear some amazing music and discover something about the artist’s career that you never knew before.

As a music-focused nonprofit and public broadcaster, KEXP is committed to championing contemporary and independent music as an art form, and always looks for opportunities to engage audiences in unique and exciting ways to discover new music and fresh ways to think about the music they already love. The Six Degrees series is a primary example of the organization’s dedication to this mission.

Chuck D helped raise a generation, multiple generations in fact,” says hip-hop artist and KEXP DJ Gabriel Teodros. “He famously called Rap music the Black CNN, and when he said ‘Fight The Power’ people responded. When Public Enemy was one of the biggest Hip-Hop groups in the world, Chuck D had countless young listeners going out to read The Autobiography of Malcolm X, with just one lyrical reference. It's so exciting to have a whole day to dig deeper and help celebrate the continued living legacy of Chuck D.

In the KEXP Gathering Space, as the day’s programming plays out, Seattle-based artist and illustrator Andrew Wicklund performed a 12-hour live drawing, with an illustration for each song as it spins. Watch footage of that below.

Watch as Seattle-based artist and illustrator Andrew Wicklund draws live in the KEXP Gathering Space as our 12-hour programming during Six Degrees Of Chuck D plays out.