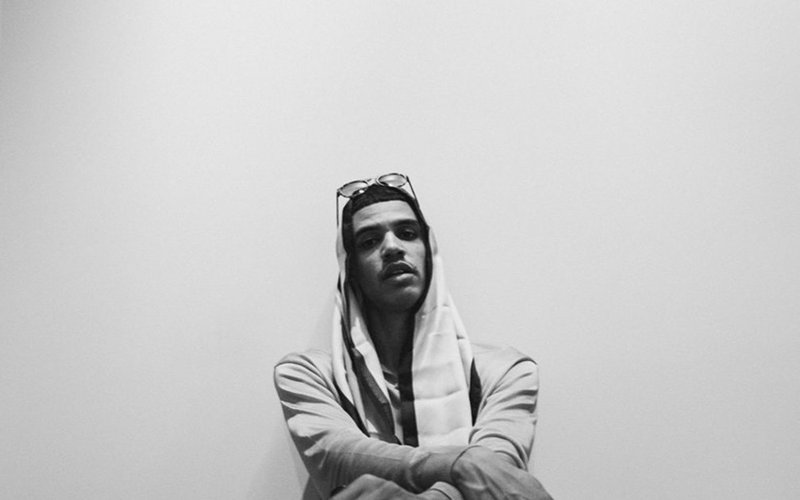 Some rap albums are bombastic events and others are so subdued and nuanced they slip into the collective consciousness without a substantial amount of notice. This is more a fault of marketplace – of Black art being commodified and sold – than of the artist themselves. For nearly a decade now, Porter Ray has crafted a catalogue of gorgeous, thoughtful rap songs heavy on grace and subtext in an environment where (mostly white) consumers prefer their rap stars to be either gaudy and ostentatious or near-obtuse and residing in major American markets (meaning you can only be super arty in overcrowded rap populaces like New York, Los Angeles, Houston, or Atlanta).

As much as people – obsessive rap fans especially – would like to believe rap music is a meritocracy, most of the time it just amounts to numbers on a streaming chart. I can’t tell you why Porter’s latest opus, When Words Dance, has been out almost a month and there are only a few hundred words to show for it. I could make dozens of cynical guesses but I only work part-time for KEXP. It’s certainly not for lack of talent, as Porter’s monologues are as singular and beautiful as anything going in rap music today; his renderings of dope boys in joggers earning their money pitching on corners as majestic as a Kehinde Wiley portrait.

According to Porter in a 2019 interview, When Words Dance (recorded in 2017), serves as a prequel to previous release Eye of the Beholder, which dropped quietly in the waning days of 2018; an album poetic, weighty, and atmospheric to the point of being dreamlike.

The vocal snippet at the end of opener “Touchstone” cleverly alludes to Porter’s own uniqueness in the space of rap music, supported in his choice of producers. Longtime collaborators B-Roc and Dez Anthony have served as a big piece of Porter’s distinctive sound; their beats have a sense of clarity, smoothness, and a melodic sensibility steeped in pensive recollection. This sound augments the dignity and elegance of Porter’s writing, even when he’s rhyming about bullets lodged in sedan doors.

B-Roc teams up with local legend Vitamin D on the late-night drama of “Daily News,” with Porter surveying the young Black people getting snuffed out by cheap guns and being relieved of their jewelry while cops make arrests brazenly ignoring protocol. News reporters stand outside the yellow tape and coldly report another Black life being taken; in a car full of people, a young woman gets shot by accident. The latest of a long line of Black people – with all our history and service to American culture – being memorialized by reporters in pantsuits and second-page headlines in the newspaper.

When Words Dance is jazzier than its predecessors, with lightly sputtering saxophones and jazz piano scattered around the album’s ten tracks, a nod to a past where Seattle’s Central District was home to some of the country’s most talented jazz artists dating back an entire century. “Daydreamer (When Words Dance),” the album’s almost-title-track, serves as a highlight, the dank smoke of a nightclub replaced by the smack of drums. While the beat evokes off-duty trumpet players lighting joints in the alley, Porter conjures young Black men in white tees and sweatpants sitting in German-built luxury cars, fresh dry cleaning cooling down in the backseat. Flashbacks to kids playing in neighborhood streets while hustlers make deals; “When Doves Cry” blasting from a boombox somewhere in the distance.

Porter recalling his little brother getting popped in his car like John F. Kennedy, a thoroughly explored aspect of his writing. But as any therapist or binge-watch of The Sopranos will tell you, grief is a process.

Most of Porter’s songs are steeped in memoir and the hold of the not-so-distant past. On “Time Travel (PlanetShine),” however, he weaves his way through centuries both forward and backward in time, breezing between generations, holding swords and pistols, steering in the cockpit of a spacecraft. In his verse, Ca$htro’s mind moves back to the tradition of trapping and the pain of lost friends, divine intervention and police interception.

Over the rolling piano and dumbell drums of “Camouflage,” Bruce Leroy runs away with the song by virtue of his dizzying wordplay, alluding to Prada underwear, “lead[ing] the league in assists,” cocaine slang in the form of white-passing Peruvian bricks, bad luck revealing the resilient character of his friends, and phony gangsters looking like fifty-cent pieces instead of keeping things 100 in a verse so knotty it would take an entire Boy Scout Troop to get untangled.

Closer “Bloodstone” is a rare foray into fiction, Porter unspooling a botched heist from beginning to bloody end over the minimal lurch of Dez Anthony’s beat. A man and a woman, strapped to the gills, ready to walk into the bank and take the winner’s purse to a comfortable anonymous life. “City of God, mothers from the same favela.” A sharp shot turned into a deadly gunfight.

The idea of beauty in Porter’s songs is introduced strongly in “Pisces,” B-Roc’s twinkling composition much like the astrological sign the track is named after: emotive, as light as the moon in the night sky, sensitive to the point of delicacy. (I understand “delicate” is not a very cool way to describe rap music, but it’s an interesting diversion from its standard modes.) Porter sees the audience he makes words dance for; the dealer pushing through long nights and the woman who may appreciate him bearing his weary soul.

Throughout Porter’s work exists a pretty face on his mind; many of those are sprinkled throughout When Words Dance. Filipina and Cuban women in nice weather, “bouncin’ with brown-skinned girls from the South End,” and the focal point of a good amount of his work since his breakthrough piece Watercolor: the mothers of his children. “Eye of the Storm” weighs the advantages of co-parenting from the perspective of an upwardly mobile artist, engaging in the spoils of being desire while simultaneously supporting his family. Its hook reveals a complicated side of fatherhood: “My baby mama asking ‘bout child support / My other baby mama flashing, act wild in court.”

A big part of artistic success is embracing what makes you different from every other artist out there, which can be a process of splitting hairs given how many people try their hand at being artists. Porter Ray uses an individual template to express the conflict going on in his headspace, his relationships, and the streets he was raised on; making ethereal, resplendent rap music in the process. It’s safe to say there are few rappers working today making the street pharmacist lifestyle sound as lush, ornate, meticulously crafted.

Last year's Black Girl Unbothered was one of the highlights of Fall 2019; with LIV† ruminating on spirituality, fake queers, and longing. It's almost-self-titled opener is worthy of throwing on repeat and, at the present moment enjoying the waning weeks of summer and basking in rays while LIV† raps and sings her way to enlightenment. The video – a collaboration between Harvest House and Liv Free Productions – flits between March 7, 2020 B.C. (that's Before COVID) and the present day, a menagerie of those memories we hold dear of expressing joy with our communities along with snapshots of video chat work meetings (resplendent with beachy background images) and creating art in the relatively tight space of our apartments. It's enough to make you miss going to concerts and house parties even more than you already do.

LIV† had this to say about the "Unbothered" video:

“Unbothered” the music video is an ode to black women's happiness captured in time, and how making the best of a bad situation is sometimes art imitating life. We went through so many changes and push backs due to COVID trying to make our original concept happen, and Before everything went into shut down, the universe granted us one day (about 4 hours total) of shooting. I mean it when I say, the black women featured saved this video. Everything great about this video is because of these amazing women. They brought the energy, the beauty, the vibes, the perfect amount of ratchet (lol), and all the unbotheredness one could ask for. This video is more theirs than mine. In the end, it was all the video needed to get the message across of us wanting to be alive, free, and happy. With COVID-19 still surging strong in America, there is no end in sight. No immediate plans for a return to gathering to see live music, which is the lifeblood of our music-obsessed community. Music venues all over Seattle lay idle, and we're still trying to recreate this feeling by watching old live performances on YouTube. A sliver of good news has come in the form of $750,000 in grants to King County venues like Neumos, Clock-Out Lounge, Neptune Theatre, and more. It is only a light balm on a huge wound, and venues are still fighting for enough relief to pay the employees not on furlough, but it is a start. Read more about these relief grants over at The Seattle Times. Throwaway Style: On Porter Ray and How to Respond to Trauma and Setbacks with Grace 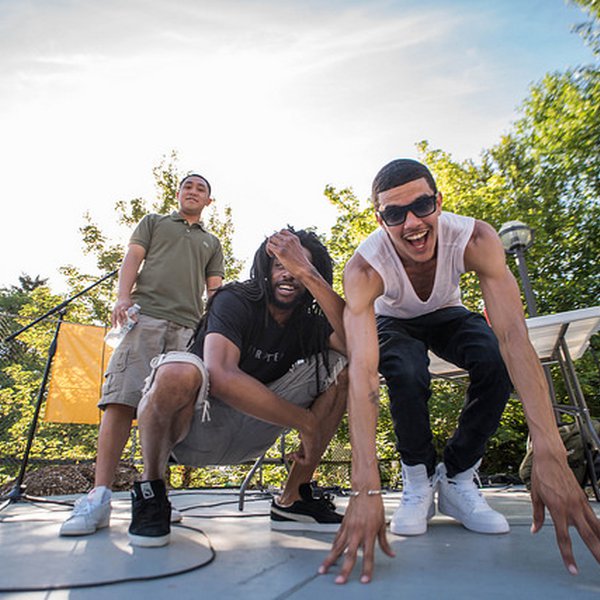 Closing out KEXP's 2016 Hood to Hood was Seattle's own Porter Ray, whose laidback flow at least kept things chill, y'know, musically. The wise-beyond-his-twenty-something-years rapper brought some romantic rhymes to the stage, combining some old-school R&B vibes to his hip hop sounds.