MoPOP’s Sound Off!: Celebrating the Alumni of This Annual 21-and-Under Battle of the Bands

For pretty much the last two decades, Seattle's Museum of Pop Culture, or MoPOP, has hosted Sound Off!, an annual "Battle of the Bands" for musicians 21-and-under here in the Pacific Northwest. The competition gives these young artists a chance to showcase their creativity; often, it's the first time they've performed outside of their parents' basements. Sound Off! also gives these burgeoning new talents a chance to meet like-minded peers and to receive mentorship from some of Seattle's industry veterans. (And to top it all off, a chance to be on KEXP's airwaves as we broadcast live from the finals!)

Throughout the month of February, artists have been facing off in the 19th Annual Sound Off! competition every Friday night, leading up to the finals on March 7th. As we get closer to the final concert, KEXP's Content Team wanted to take a minute to reflect on some of the competition's most successful alumni, artists who've parlayed their participation into active music careers. Check out just a few of the artists who've taken it from MoPOP's illustrious Sky Church to beyond.

2017’s Sound Off! winner was an unlikely one. The skinny 20-year-old, armed with just a guitar and his voice, was going up against R&B sensation Falon Sierra, indie rockers The Good Weird, and electronic producer Torpoise. How would he be able to fill up a room as well as them with just that guitar? It soon became clear.

His masterful guitar work, filled with fingerpicked arpeggios, probably could’ve been enough to at least land him in second or third place but it was his voice, which explores different eerie ranges, and the accompanying lyrics that are at times bitingly sarcastic and other moments rawly emotional, that won him the crown. It was a sensational moment for the surprised audience as well as the unlikely troubadour.

A recent transplant from Philadelphia, at the time of Sound Off! McCue had stopped playing shows after performing at two disappointing house shows, where the crowd was more interested in partying than listening to the vulnerable singer-songwriter. Since his win, McCue has gone on to grace nearly every stage in Seattle, including festivals Bumbershoot and Folklife. His first tour last year inspired his latest album Wasteland and he’s currently on his second tour.

As a musician, not much has changed about McCue. His writing is still just as dense in sardonic jabs at those who deserve it, like the president, as it is with the tense emotions of growing up and feeling lost in the world. Keeping busy since his Sound Off! win, he released the full-lengths Obscure in 2017, Pangaea in 2018, and Wasteland in 2019. Here’s hoping nothing slows McCue down.  — Jasmine Albertson

Since winning Sound Off! as a wild card entrant into the 2013 finals, the Renton-born Dave B has garnered a wave of accolades which would look exceptional on any Seattle rapper's proverbial CV. National recognition in publications such as long-running hip-hop magazine XXL, hopping on a track with Macklemore (along with fellow Sound Off! alum Travis Thompson) and opening for him in a sold out Key Arena, a mentorship underneath dearly departed local legend J. Moore. B famously grew up loving gospel music and invested in the church his father preached in, and last year's BLEU highlights his soulful earnestness reflecting his upbringing. His fourth album is teeming with odes to new love, casting trivial problems away, isolation, and the pain coursing through a young man on the journey of growing up. — Martin Douglas

In 2015, Emma Lee Toyoda took the Sound Off! stage a mere two months after joining forces with a group of musically gifted friends including Veronica Johanson-Faison, Zeke Bender, Adelyn Westerholm, and Anna White. The five-piece’s eclectic indie-folk arrangements paired with Toyoda’s emotionally fraught lyrics won hearts, landing them in third place in the competition and opening doors to play every major local festival that year.

The next year, Toyoda released their debut full-length sewn me anew which garnered praise for Toyoda’s unique deep-chested vocals and the diverse maximalism the band explores, throwing nearly every instrument they can pick up into the mix. At the time, the band was using the term “sadgirlrock” to describe their sound. An apt genre term and one that Toyoda thought was important in helping reduce the stigma on depression, especially in Asian communities.

Since then, “sad” has grown into “frustration,” “girl” has evolved into “transmasculine non-binary” and the “rock” has gotten rawer with each release. 2018’s stripped-down EP i hear u & i’m here 4 u was a desperate plea for support and comfort during depression while 2019’s i don’t wanna play ur show tackles Toyoda’s anger at the racist, sexist, and/or transphobic bookers, promoters, and venue owners they’ve encountered over the years that have treated them with utter disregard. Wherever Emma Lee Toyoda is going, you can count on them to tell the truth. — JA

This trio of garage-demolishing rock wunderkinds are known for their exciting live sets, which took them to the 2015 Sound Off! finals and far beyond. Since then, they've been wrecking stages all over the Pacific Northwest with their fun-but-urgent brand of dirty surf music and also opened for Car Seat Headrest on a European tour. Their 2018 full-length debut, SLUFF, was one of the very best records to come out of Seattle that year, blaring tunes with emotionally in-depth lyrics, full of paranoia, anxiety, depression, and for another slow dance. — MD

Largely known as the first major success of Macklemore and Ryan Lewis' The Residency — the city's summer hip-hop program for youth coming from low-income homes — 23-year-old Travis Thompson, a Sound Off! 2016 semifinalist, has worked his way to the most visible position in Seattle's rap scene. He appeared alongside Macklemore (and aforementioned Sound Off! alumnus Dave B) on "Corner Store," where they performed the song on The Tonight Show with Jimmy Fallon alongside legendary producer DJ Premier. Thompson signed a major label contract and on the resulting album (last year's Reckless Endangerment) created a multi-generation posse cut of Seattle rap legends, featuring Macklemore and introducing Blue Scholars and Sir Mix-a-Lot to an age group probably too young to remember (or be born early enough for) Joe Metro and "My Posse's on Broadway." If that isn't an intentional statement from the clever and chameleonic Burien-bred rapper to say he belongs on Seattle hip-hop's Mount Rushmore, maybe writing about music coming out of this city as long as I have actually hasn't been long enough. — MD

Since her stint as a finalist in the 2017 Sound Off! competition, Falon Sierra has kept busy refining her jazzy, soulful style. Her 2016 debut, Beauty in Danger, captured the wise-beyond-her-years vocals that blew everyone away at the Sky Church. In a 2017 interview with KEXP's Dusty Henry, Sierra explains that her genre-defying sound comes from a lifelong-love for music. "I wanted to mix all the styles together to show people that I wont limit myself. My goal was to get that out of the way right off the bat. As of right now my foundation genre is definitely alternative r&b with a neo soul/jazz twist," adding, "I never want to limit myself or my ears, that's disrespectful to my ears. If I can sing to it and write to it, then its my style."

Sierra's most recent EP, Damaged By System, is another stellar collection of electro-R&B with her strongest lyrics yet. The closing single — “Let Them [Sleep On You]” — is a somber monologue about the state of Seattle over a dark, foreboding beat. "Do they even see me?" she sings, lamenting the rapid gentrification of the city and how it affects artists like Sierra. KEXP can't keep our eyes away. — Janice Headley

Manatee Commune (real name: Grant Eadie) may not have taken the top prize at the 2014 Sound Off! competition, but he was crowned "Best Electronic Artist" by the Seattle Weekly shortly thereafter, was a finalist the following year in NPR Music's Tiny Desk Concert Contest, and continues to release new music via renowned label Bastard Jazz Recordings. (He has a new EP titled Crescent Lake coming out on April 10th and just recently shared the single "Majestic Driver.")

But Eadie isn't after the fame. "It’s a dangerous pursuit that causes a lot of false success and lost dreams," he described it during an interview last year with Magnetic Magazine. "Fame should be considered an added benefit of work well done, not an ultimate goal. I think at one point everyone dreams of being the person who gets all the looks, all the attention, but as we grow up it becomes apparent that life is so much easier when you can just put your head down and do the thing you love." — JH

Last fall, Parisalexa (full name: Paris Alexa Williams) delivered a soulful stunner of a performance at the Street Sounds live broadcast from the KEXP Gathering Space, and before her session, she sat down with KEXP's Sound & Vision to talk about her start in the music industry and what she’s learned since then. She also touched on her recent appearance on NBC's "Songland", performing a track she originally wrote for Ariana Grande or Rihanna.

"People tell you a lot of things that they don't backup and sometimes they can be huge life-changing things that they can tell you," Williams advises. "And then they’re like, ‘oh well I said the last week.’ I was raised off of integrity, when you say something, you're going to do it — that's kind of how people judge you and your character. But in business, you cannot take it personal. It's such a weird thing because I'm like, man I want to cry or like dang they said this. But, it's like you just got to kind of take it with a grain of salt and keep pushing. I would say I have like 80 million backup plans because you know you can't really trust people's word all the way."

Since the release of her 2018 debut EP Bloom, Parisalexa has been rapidly releasing new singles every few months. Earlier this year, she dropped the track "Chocolate" and just last November, she shared the single "2 Real." — JH 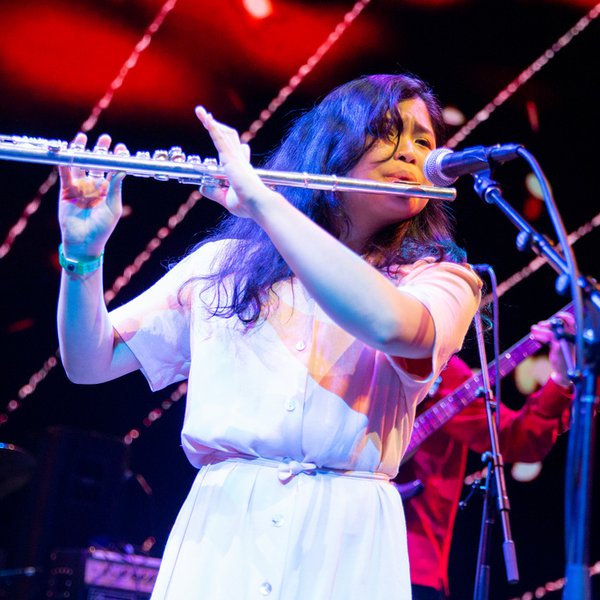 Seattle's i///u took home the top prize, but the evening provided fiery sets from Baja Boy, <B>Huey and the InFLOWentials, and Alex Cade. 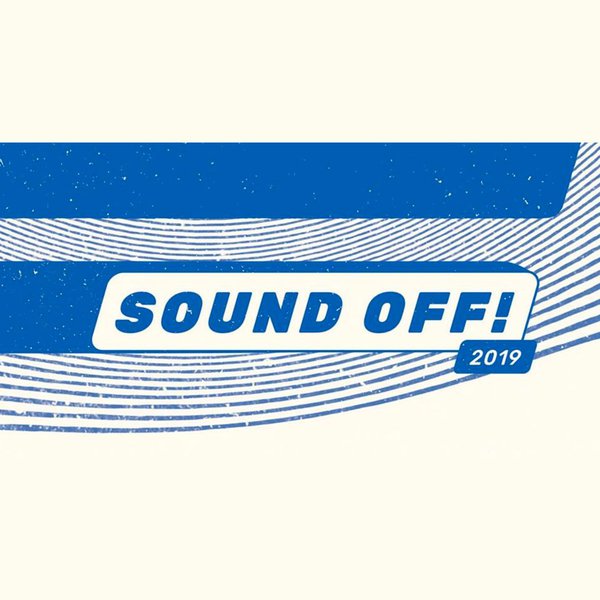 KEXP Presents: Audioasis Live from the 2019 Sound Off! Finals 3/2

The 2019 edition of MoPOP's annual under-21 competition will reach its climax this Saturday, March 3rd. And as usual, Audioasis will be broadcasting live! 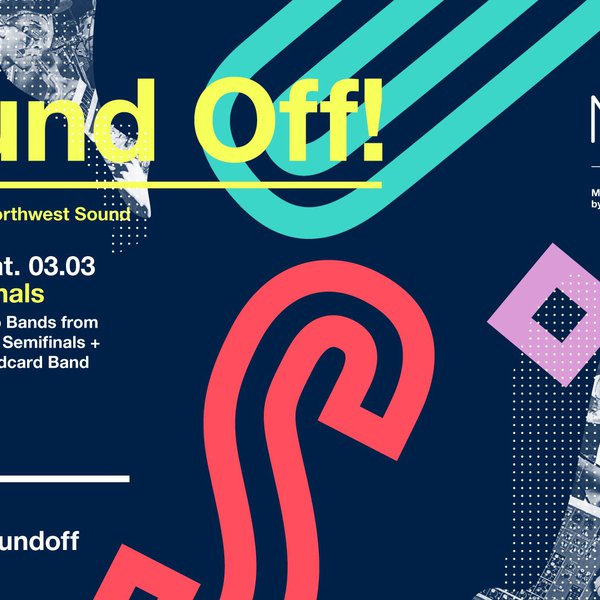 Throughout February, MoPop's annual under-21 competition Sound Off! brought together twelve of the region's most promising young artists. This Saturday, March 3, four finalists will battle it out at MoPop's Sky Church stage for a chance to be crowned the 2018 winner, and Audioasis on KEXP will be...