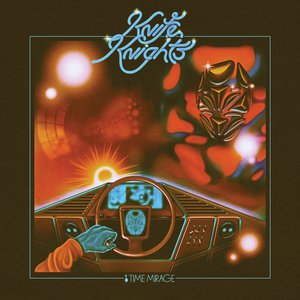 As just announced during their in-studio session on The Midday Show with Cheryl Waters, the duo Knife Knights will release their debut full-length 1 Time Mirage on September 14th from Sub Pop Records. You can check out the album artwork to the right, designed by Lexington, KY-based artist Robert Beatty, also known for his work with the Flaming Lips, Tame Impala, and Thee Oh Sees and other experimental, psych-heavy artists. They've also shared two new tracks that you can stream below: "My Dreams Never Sleep" featuring OC Notes, Marquetta Miller, and Shabazz Palaces; and "Light Up Ahead (Time Mirage)" featuring Porter Ray, Gerald Turner, Darrius Willrich, OC Notes, and Shabazz Palaces.

It's charming to think the project began in such a fanboy way: the two met in 2003 at a Spiritualized show in Seattle, with an awestruck Blood asking for an autograph on a bootleg copy of Digable Planets' Blowout Comb. ("For a friend.") Over the next few years, their mutual admiration collided into a creative partnership. “He takes my ideas and clarifies and pronounces them, helps me realize them,” Butler said via a press release. “He helps me get to the essence.” Keen-eyed Shabazz Palaces fans will note: 1 Time Mirage is not Knife Knights' first released work, as the two have been credited as producers under the moniker on both Shabazz Palaces LPs, Black Up (2011) and Lese Majesty (2014).

Earlier this year, we premiered the single "Give You Game," an eerie, mesmerizing track punctuated by guest vocals from Marquetta Miller and (KEXP DJ) Stas THEE Boss. It was a tantalizing taste of the 11-song LP to come, which (as you can sense from today's new tracks) features a packed guest appearances list including labelmates Shabazz Palaces and Porter Ray, along with fellow KEXP DJ OC Notes, Thaddillac, El Mizell (aka former Street Sounds host Larry Mizell, Jr.), Gerald Turner, and Darrius Willrich. The album was produced by Ishmael Butler and Erik Blood themselves — as will surprise no one — and was recorded over three sessions in between Shabazz Palaces tours and Blood’s recording projects.

Knife Knights' 1 Time Mirage will be available on CD/LP/DL/CS worldwide from Sub Pop. Preorders of the album through the Sub Pop Mega Mart and select independent retailers will receive the limited Loser edition pressed on blue and white marbled vinyl.