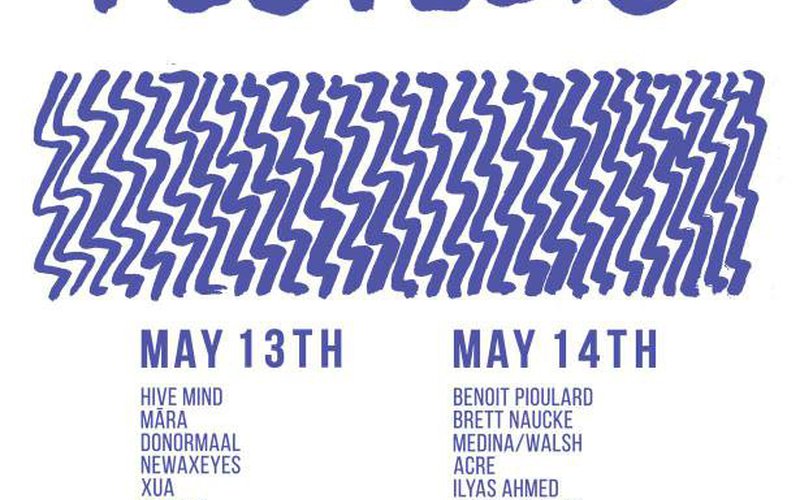 This Friday, May 13th and Saturday, May 14th, Seattle’s Debacle Records brings the ninth edition of Debacle Fest to the beautiful Columbia City Theatre for two nights of transportive experimental, ambient, drone, noise, psych, and get-lost-in-your-head-I’m-floating-in-space music from artists across the country and Pacific Northwest, representing some of the best in underrepresented, underground sounds. Take a chance, zone out ,and try and keep up with all the Moogs, Korgs, and Rolands strewn across the stage, Debacle Fest is a real trip so dig in.

Hive Mind’s brand new album, Moments Descended in Blue Ash, begins with a low rumble that sounds like an approaching barbarian horde about to crest a hill before giving way to an eerie Forbidden Planet electronic vibe. Welcome to Debacle! The buildup up of white noise stretches further and further until we circle back sound-wise to the icy and uneasy calm of Dr. Morbius’ lair. Get in the right headspace and you’ll swear Robby the Robot is enjoying the show up in the balcony above your head.

DoNormaal -- Seattle’s Christianne Karefa-Johnson -- emerged on the scene in a big way in late 2015 with the remarkably developed and assured Jump or Die mixtape. Hopefully KEXP listeners caught her set during the New Home Grand Opening, have taken in one of her many turnt local shows over the past couple months, or simply bumped Jump or Die cruising ‘round town (it’s summer y'all, turn up that bass!) or during a smoke sesh or two, but if you haven’t, you’re in for a real treat. Dynamic songs and a dynamic performer who’s getting better every show, DoNormaal is not to be missed. Quite simply one of my favourite local artists right now.

Seattle’s Newaxeyes teased us with the stellar Assange / Church 12” a year ago and posts the odd song to Soundcloud, not to mention their fantastic live-scoring of Alien at the Northwest Film Forum (it was even scarier), so I’m eager to see what the cinematic-sounding quartet presents on Friday. If past shows are any indication, it’s sure to be kick-ass and psychedelic.

Colour me particularly jazzed for Xua’s set, the project of Portland artist Joshua Lee Vineyard. Last year’s LP Mekong Moon on Debacle was inspired by Xua’s treks through Southeast Asia, a completely engaging blend of classic synth-driven beats and New Age awe and optimism expertly interspersed with field recordings of instruments and conversations recorded along the way. In Xua’s words, “what would a future world sound like if eastern culture emerged as the world’s dominating power? What unheard radio transmissions would emerge?” Mekong Moon is the result, and what a gem.

Kate Olson a.k.a. KO SOLO is an improvisational force on the saxophone, both as a solo performing artist and ensemble player appearing on stage with local acts like Syrinx Effect, KO Ensemble, Seattle Rock Orchestra, Electric Circus, and national experimental heavyweights like Terry Riley and Pauline Oliveros. Oh, and Elvis Costello, Sir Mix-a-Lot (!), and Big Star’s Third, too. Just thought I’d casually throw that in.

Pink Void impressed mightily at the bonkers Pharmakon show last year. Try and get up close to see how much (and how loud) one person can be with a guitar and a ton of effects pedals at the ready.

Andrew Crawshaw, drummer for heavy psych outfit Terminal Fuzz Terror, trades in his sticks for synths as Meridian Arc, a solo project with great promise if the lead track from his forthcoming album Aphantasia is any indication (out June 10th). Rest assured, and remind yourself periodically during the set, you’re not actually stuck in the haunted ballet academy from Suspiria.

On a more peaceful tip is Portland’s Ant’lrd whose music radiates warm analogue cassette vibes, hiss and fog radiating peacefully from the speakers as the sun slowly and wonderfully begins to break down the splices and loops of the tape.

Knifecream should definitely sate the harsh-noise and industrial heads out there (I see you) and obliterate the rest of us. Oh, and with some techno thrown in too, in case that wasn’t intense enough already. Bring ear protection.

Next up is L.A.-based Oil Thief, still bringing the noise but injecting more of a dark, cavernous beat, as evidenced by his new EP on Berlin label Total Black. In conjunction with last year’s massive Obsolescence & Monality release, this should be one intense set.

Don’t sleep on versatile Seattle beatmaker Diogenes, who has a real talent for mixing in, playing around, and employing different vibes, styles, and sounds from across the hip hop spectrum. Boom bap, trip hop, g-funk, dusty loops, chopped and screwed -- let’s hope it all makes an appearance Friday night. Oh, and that real Memphis-sounding beat he just posted. TRIPLE SIX.

Andddddd coming back ‘round sound-wise is Somesurprises, self-described “lo-fi bedroom stuff” from Seattle artist Natasha El-Sergany (although I like “Sineadcore” a lot, too). Spare, intimate, and warmly enveloping, Somesurprises radiates total Mazzy Star feels, combining folk and dream pop trappings in wonderful ways, perfect for a hushed theater or a quiet, meditative afternoon.

Last but not least is Monika Khot from Invisible Hand. Her Soundcloud page has four songs, one tagged as “militant” (“APOLOGIZE TO ME HUMANITY”) and another “bicycle” (er, song title in Cyrillic?), each sounding pretty different and pretty rad. Stoked to hear more from the Seattle musician.

Making the trip from Chicago is Brett Naucke, an accomplished sonic and visual artist from the Windy City. His debut LP Seeds, on the discerning and always-absorbing Spectrum Spools label in 2014, is a work of considerable sophistication and depth. Intricately layered and arranged, his background in sound design, installations, and film scores is sure to intersect and play out in many interesting ways live.

Joshua Medina & Paurl Walsh play together as Medina / Walsh, the former adding emotive, droning guitar lines to their compositions while the latter brings it with various electronics, samples, and keys to incredible effect. The duo’s 2014 release on Seattle’s Hanged Man Recordings Joshua Medina & Paurl Walsh is a quiet stunner and seeing these two play side-by-side on stage, the acoustic and synthetic working together, should prove gripping. Look for their new LP Vault of Angels this July on Debacle Records!

Acre exhibits a restless creative spirit, spending time in the UK, the Midwest, Olympia punk houses, and now Portland, putting out a slew of albums, singles, cassettes and CDrs in that time. Name-checked by, and featured on, mixes from out-there electronic heavyweights like Visionist, Appleblim, and Karen Gwyer in the past couple years, I’m doubly excited to see Aaron David perform live once more.

Ilyas Ahmed is on fire this year having collaborated with duo Golden Retriever in the group Dreamboat, whose S/T 12” is absolutely one of the year’s best offerings (think: Tim Buckley meets Cluster). Highly accomplished as a solo artist, Ahmed’s music and work on the 12-string guitar is completely hypnotizing. Can’t wait for this one.

Portland duo Visible Cloaks have assumed a couple of monikers over the years and put out some great sparkly, playful ambient music on respected labels like Students of Decay and Sun Ark whilst running in the same circles as other West Coast experimental figures like Eternal Tapestry, Starving Weirdos, and Sun Araw. Should be a peaceful performance.

Fest mainstays L.A. Lungs, longtime Tacomans and now plying their musical skills in Olympia, will grace us Saturday with their affecting electro-acoustic pieces, sure to evoke tender memories and #feelings. L.A. Lungs are a reliably moving and spiritual experience, so don’t miss out.

Spectrum Control started out as the one-man project of Portland’s Dewey Mahood (Plankton Wat, Eternal Tapestry, Edibles), now expanded to a trio featuring Dustin Dybvig of Horse Feathers and Theo Craig of up-and-coming shoegaze bad Cat Hoch. Count on these three to serve up a potent blend of lo-fi psych jams, equal parts dreamy and heavy, with some synth flourishes throw in for good measure (“RIYL: YLT with laryngitis on mushrooms”).

Ten years on, Seattle duo Bad Luck are still going strong, as vital and exciting as ever. Featuring Chris Icasiano on drums and saxophonist Neil Welch, the pair have four critically acclaimed albums, receiving plaudits from Earshot Jazz and Album of the Year 2012 from New York Jazz Review for Two. Expect a high energy performance from these two accomplished musicians.

For all you IDM, Autechre glitch-heads out there, Marcus Price is your guy. All the disparate clicks, gurgles, squiggles, and microtones come together wonderfully in his performances (check out a live set recorded last month at Hollow Earth Radio for proof) and the big stage in Columbia City Theater should afford the complexity of his sounds some real room to live and breathe.

Bloom Offering is Seattle musician Nicole Carr, set to bring a hazier Throbbing Gristle mood to the proceedings with a healthy dash of darkwave and goth leanings thrown in as well. If titles like Wounded Knee - No Fun in Heaven, Death Bed, Separation Anxiety, “Hypothetical Terror,” “Meta Prison,” “Fever Rising,” and “Sisyphus” are any indication, Bloom Offering’s set should be killer.

For more information, and to buy passes, check out the Debacle Fest website. 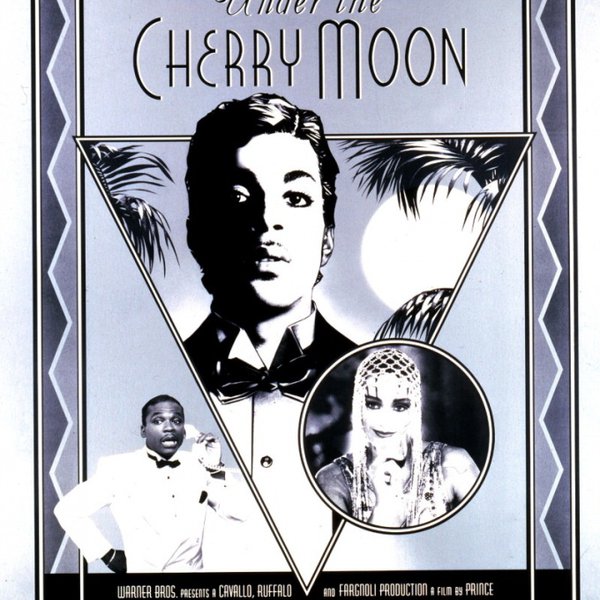 KEXP Suggests: Under the Cherry Moon at the NW Film Forum 5/19

As the world continues to mourn the passing of Prince (like with DJ Kevin Cole's incredible memorial show, streaming here), our friends at the Northwest Film Forum present their own tribute this Thursday, May 19th with a screening of the 1986 comedic caper Under the Cherry Moon. 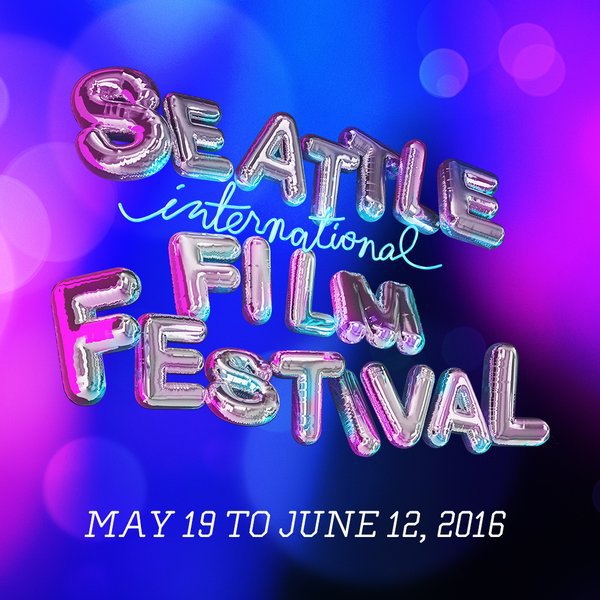 The line-up has been announced for the 42nd annual Seattle International Film Festival, May 19th through June 12th! Over the next few weeks, SIFF will screen 421 films representing 85 countries: 181 features (plus 4 secret films), 75 documentaries, 8 archival films, and 153 shorts. The films includ…