Nine decades deep into the electronic music genre, and the most startling and effective instrument it uses is still the human voice. From the earliest days of sampling and vocal splicing to the revolutionary vocal manipulations of Bruce Haack and Kraftwerk up through the live vocal looping we've enjoyed so deeply for the last fifteen or so years, it's always been the human voice guiding our electronic explorations, providing the basis for connection and intimacy against a backdrop of circuits and wires. And on nights like tonight, as UK electronic pioneer James Blake closes out his set with the vocal-loop swirl of "Measurements", we can fall in love all over again with just what wonders the voice can accomplish with the help of modern technology. Blake's touring counterpart Moses Sumney knows a thing or two about this as well, driving his entire set from the power of a vocal modulator, and yet, never once sparing the horses with expansive and vast arrangements. Both of these artists soar in the face of vast temptation to buy into cheap tricks and gimmicks, each one trailblazing new terrain as they explore their own souls for inspiration, and their intentionally limiting hardware setups for a paintbrush. Hot on the heels of Blake's new LP, The Colour In Anything, and Sumney's new EP, Lamentations, the two brought incredible power to the Moore Theatre on Wednesday night, filling the downtown cathedral with all the vocal prowess it could handle, challenging their listeners always to find more in less before dazzling them with glittering saturation.Moses Sumney had a beautiful red guitar sitting there on the stage with him, but it was far from his primary instrument. A few songs in, he picked it up for "Man on the Moon" from his 2014 EP Mid-City Islands. Sumney's impeccable voice danced over pristine guitars for three minutes before he put the pick down and began a simple construction, layering one euphoric voice on top of another until the captivating outro reached its climax. While Sumney's recordings tend to branch out a bit more with their instrumentation (his fantastic Terrible records 7" "Pleas"/"Seeds" is largely a folk guitar record, and his new single "Lonely World" is a full band Odyssey of a track), it's evident that Sumney likes his live presentation to be painstakingly organic. While some artists who rely on live loop-building tend to lose the audience to the pacing of their own creations, Sumney's constructions were brilliantly layered, building in unexpected and contoured ways, the way some of Phil Selways's best percussion arrangements seem to just fall together. One swirling build after another, Sumney's set flew by, and like the very best first acts, he left the audience pretty starstruck with how the second could possibly follow something like this up. 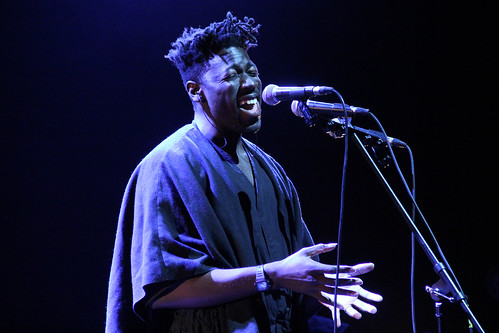 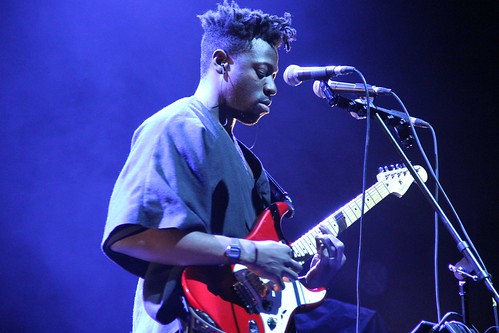 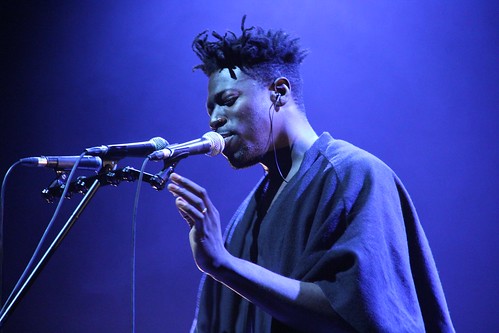 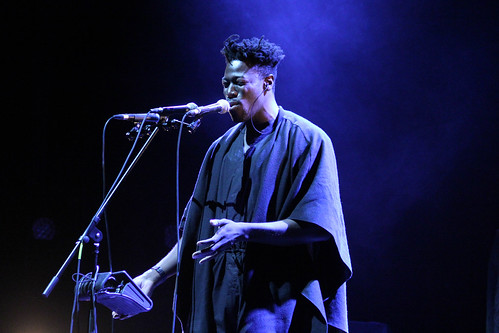 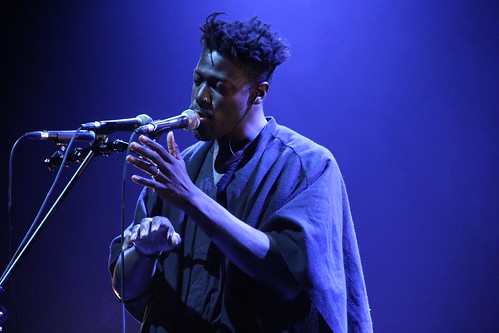 "Alright", James Blake chuckled to himself, four songs deep into his set, "I think it's going to be better for everyone if you just all stood up right now". There's this awful temptation to sit down at the Moore theater, just because it's an assigned seating show, and the slant of each of the theater's tiers makes is so that you can only see if either everyone sits or everyone stands. Blake had already burned through Overgrown burner "Life Round Here" and The Colour In Anything's "Timeless", easily two of the set's most dance-ready numbers (and which saw incredible remixes with Chance the Rapper and Vince Staples, respectively). But it's never too late for a good thing, and Blake recognized the social barrier that pretty much everyone present wanted to break without saying anything. Of course, he then proceeded to play four very slow songs in a row, with everyone standing there, wondering if dancing is even appropriate. Finally, Blake broke his radio silence again. Referencing the choice of setlist, he laughed again. "The irony is not lost on me", he smiled, "but hopefully this one will give you a reason to keep standing". The band proceeds to march into Undone's "Stop What You're Doing", the James Blake version that he put out on Hemlock back in 2009. It's the oldest track in the setlist by a significant margin. Blake rips into his Prophet synthesizer like a deep tissue massage, and it rattles the subs in the theater like nothing its heard in the better part of a year. Then, Blake returns once more to piano-driven ballads, and the standing continues, and we all have a good time.

James Blake is a man of extremes. His modern soul knows nothing of restraint in either direction. And thus, listening to his records, you are either listening to a heart-breaking and starkly naked piano ballad spiritual tribute to Joni Mitchell, or you are feeling your head explode under the weight of pummeling bass, as he explores the far reaches of the bass, grime, and dubstep genres, pushing modern UK electronic to new horizons. These extremes are oftentimes easiest to comprehend on Blake's records, where excellent pacing and emotional builds allow him to bring you on a guided tour of his mind. But in the live setting, where the listener is at Blake's whim for a hundred minutes straight, its a bit harder to pick and choose your favorite of his modes. This was evident on Wednesday night, as one look across the crowd showed an eclectic group of people brought to Blake's music for vastly different reasons. Some are there because their college roommate played his cover of "A Case of You" on the right rainy day and now it's their go-to for taking a moment of melancholy silence. Some are still holding out for the (they might say) inevitable follow to The Bells Sketch and similarly brutal dubstep explorations. And yet, still others might be there with friends knowing only his work with Chance the Rapper and Beyonce. It's a crazy, nonsensical universe that Blake exists in, one where he refuses to follow a simple narrative. But he trudges forward, continuing to brave higher heights and deeper valleys, and tell us all about it along the way in his own uncanny way.

In some disturbing, psychic bout of opportunism, Blake's light show echoed the crowd with incredible symmetry. The show begins with "Always", as two singular white lights wander left and right along a palette of black, moving along a straight line, but more out of dimensional necessity than intention. Slowly, the lights begin to break from the line, bringing one dimension to two. At the halfway mark of the show, the lights break into the third dimension, and shadows are cast against hulking objects void of movement. And finally, as shimmering light eclipses on the swirling shapes, you look to the edges of dark and light and you find the color spectrum, there for a moment and then gone again, never bursting fully into rainbow effect, but there in between the poles for everyone to know it's there. The visual is likely meant to be a reflection on the latest album's concept, The Colour In Anything, and yet in its own way, it also finds a way to represent the different spheres in the crowd moving around Blake to find a way to categorize him in their minds. The dancers are alienated by the piano numbers. The mopers gawk at the fifteen minute medley of "I Hope My Life" and the massive dub extension of "Voyeur". And yet, as Blake brings Moses Sumney back onto the stage for a lovely rendition of "Modern Soul", we all understand why we are here. Blake challenges our listening, forces us to find the colour where we wouldn't normally find it. It's a lot to ask from a crowd on any given weekday, but evidently not too much. After all, the show has been sold out for months, and Blake and Sumney are both happy to feed the demand. 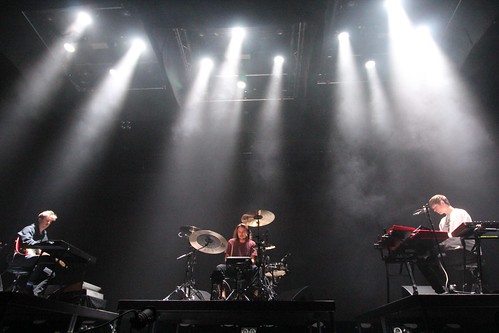 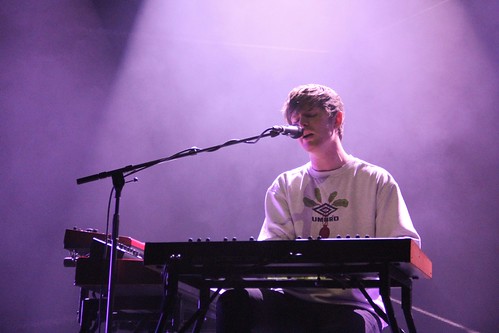 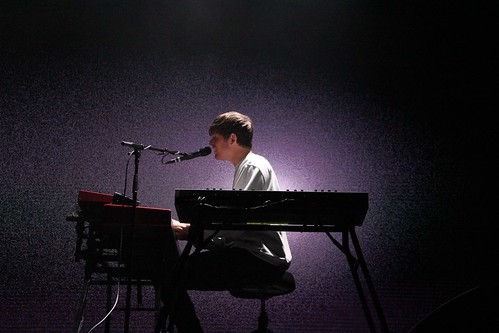 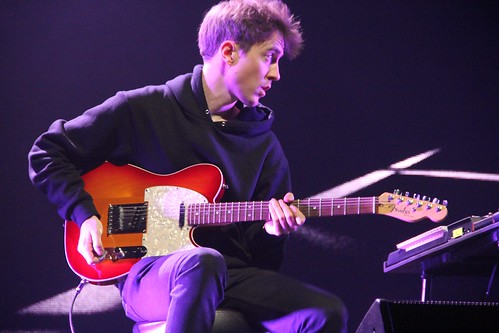 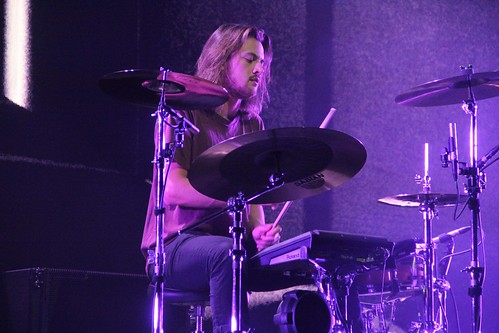 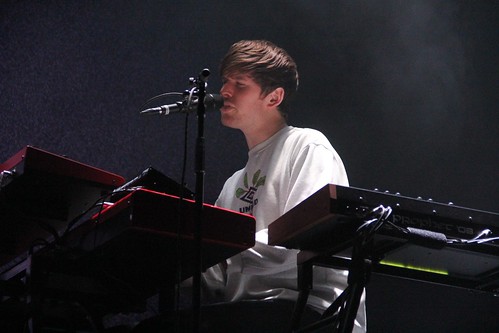 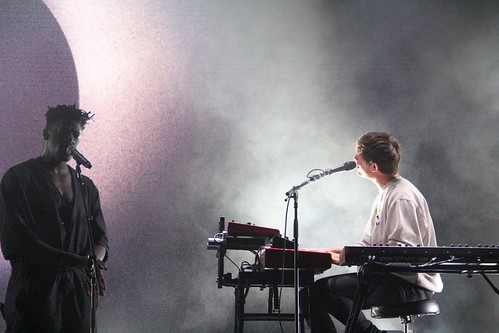 The Colour in Anything is out now. “How much is your 15 year old self flipping out right now?” That’s the text I got from Brittany right after we saw the date go up. She Wants Revenge, celebrating the 10th birthday of their 2006 debut by playing the album in its entirety at the Showbox. Wait, 10 years? Has it already been that long?… 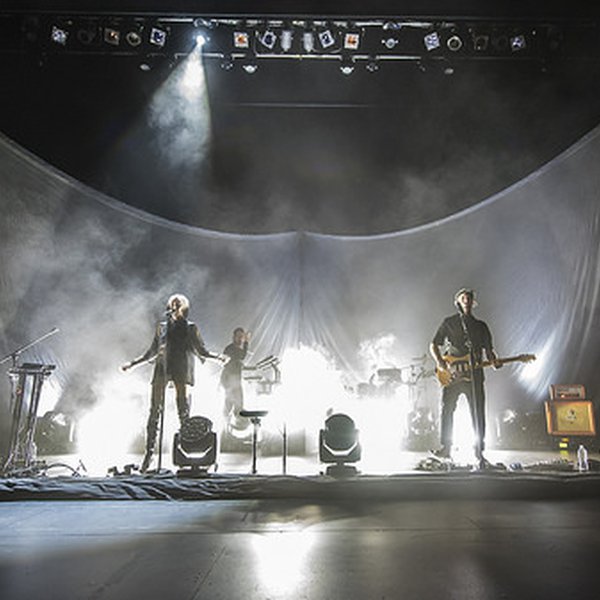 At the Paramount Theatre last week, Phantogram opened their set without even being on stage. After they performed two songs obscured from the audience, a screen fell shortly thereafter, revealing the New York duo behind the fourth wall to fervently shake the physical walls of the venue. Going from …