Folk - like rock, hip-hop, or jazz - is one of those elevated sub-genres on the music tree of life that’s just specific enough to conjure an immediate sound in one’s imagination while being just broad enough to have an endless array of tendrils splintering off of its hefty branch. Joanna Newsom and Robin Pecknold - touring together as headliner and “special guest” opener respectively - reside in relatively close places on said branch. Both have solid roots indie rock, both luxuriate in bold and experimental songwriting, and both have a deep affinity for baroque melody and instrumentation. While sometimes differences between and within genre can be apples and oranges, when it comes inventiveness, performance, and immediacy, both artists also represent the very best of what they do.

This is especially true in an era when overproduced and vacuously nostalgic folk dominate top 40 and “Spotify suggests” stations alike. At the least, Newsome and Pecknold have always separated themselves from the pack with songs like “In California” and “The Shrine / An Argument”, both of which boast 8+ minute runtimes and more twists (and satisfying rewards) than early M. Night Shamalon films. Of course, Newsom’s output has been more consistent and prolific than Pecknold’s over the last decade. Where the bulk of Pecknold’s notoriety has come from his role as the frontman for beloved but gone-too-soon Seattle folk rockers Fleet Foxes, Newsome, with over a decade of album and EP releases, has amassed the type of cult following that packs out The Paramount on a Tuesday night. The evening no doubt belonged to her. Still, the chance to see two of the most critically acclaimed songwriters of a generation match talents—one with aching guitar and transformative croons, the other with mind bending harp and super-elastic serenades—promised to be a treat for all. 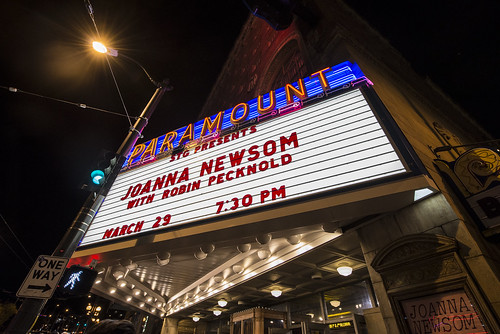 Strolling onto the stage with a relaxed confidence and guitar in hand, Robin Pecknold seemed intent to glide through his set without much superfluous fanfare. Opening with a listing instrumental piece which seemed to be neither a Fleet Foxes song or a cover also appeared to sooth the audience into a similarly tranquil state. Moreover, the tune showed off his unique finger picking style in which empty space and the notes not played are as important as the ones that are. That trait, paired with his penchant for elusive progressions that find home at just the right time, laid the groundwork for a series of songs that will hopefully appear on either a Fleet Foxes or solo record soon. All this built into a triumphant performance of the Fleet Foxes' beloved Tiger Mountain Peasant Song, the swells and peaks of which were made all the poignant by the lonely arrangement and Pecknold’s trademark voice. Ending the show with a cover Fred Neil's "The Dolphins", Pecknold kept the set brief before introducing Joanna Newsom as “the greatest living musician today.” Though short, the performance chose all the right notes to make a lasting impression. 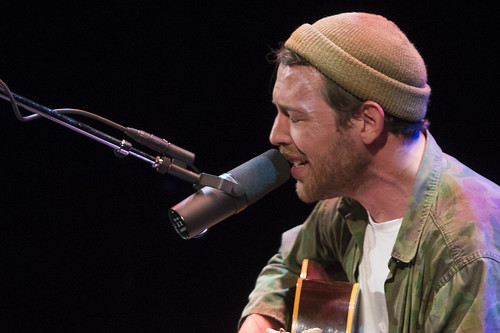 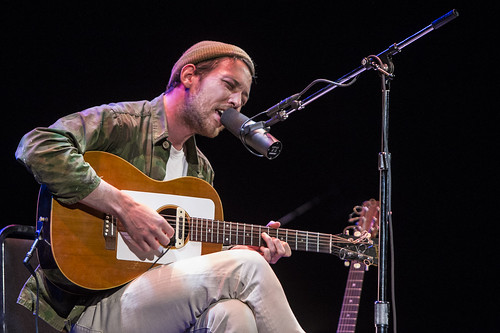 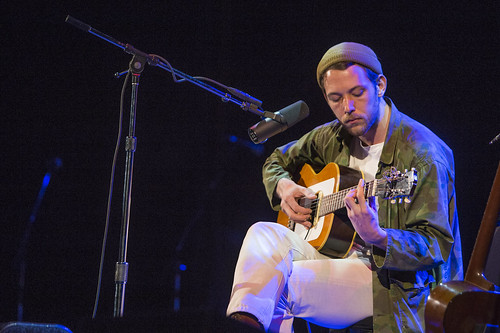 From pitsicatto piano to tip-toeing falsetto, most people associate the music of Joanna Newsom with all that is light, nimble and quick. The latter two of those three associations proved true as her blistering runs on the harp and piano as well as stratospheric vocal range came off as deft and fluid as her records would suggest. The scope of her show, however--from the multi-hundred square foot scenic backdrop hanging behind her to the six-piece band cycling through endless instruments around her--was heavy, bold, and powerful. Between performances of such epic pieces as "Divers" and "Good Intentions Paving Company", which often featured her rotating effortlessly between piano and harp in the same song, it was clear that no idea was too big and no imaginative impulse too wild for her live set. While Newsom’s music is often defined by space, and in fact, most of her songs had a band member or two who would sit in silence for the piece's entire duration, Newsom showed no fear in calling upon all of her resources to create booming productions when the moment was right.

The most memorable example of such expansive arrangements came when over half of her band whipped out recorders, (yes, recorders) to round out a blazing performance of “Sapokanikan”. Commentators have often pegged Newsom’s music as whimsical, which seems a bit condescending given the serious size of her productions, but watching four amazing classical musicians shred an ensemble recorder performance leaves few other accurate words available. Of course Newsome, always the self-aware performer, coyly acknowledged the peculiar scene immediately after the song, wryly adding that the band’s next tour would be recorders only. In this moment of humor, Newsom’s truest gift shines through. It’s not just that she’s an absurdly good harpist, a wildly inventive pianist, a strangely original vocalist, a classically accomplished poet, or a bitingly sly comic; it’s that she’s all these things at once. Through all her high brow technicality, the most simple truth shines brightest: Joanna Newsom is a consummate entertainer. Her brilliance lies not within the difficulties of her songs, but in the effortless delivery of her execution. 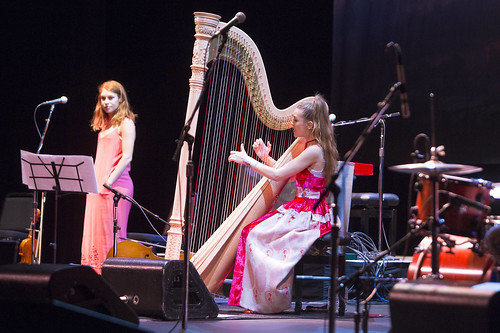 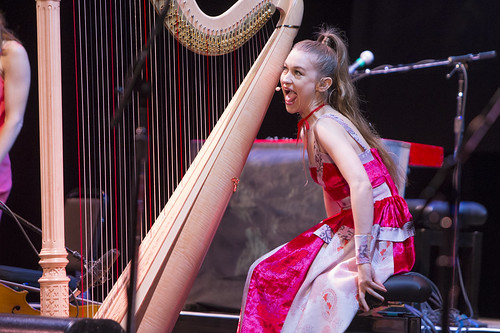 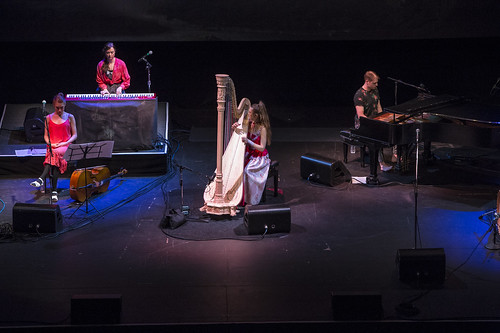 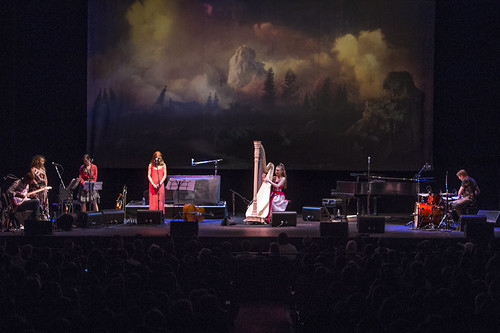 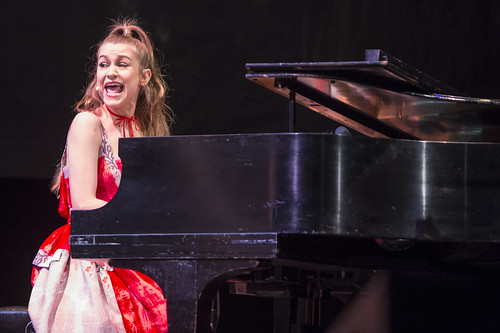 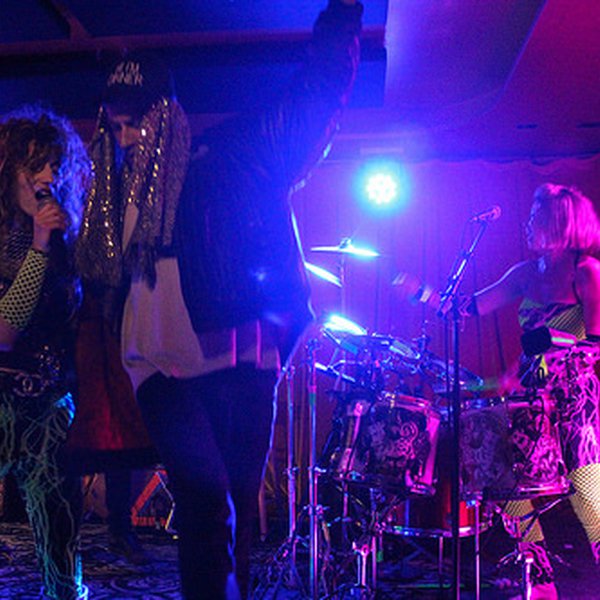 Brooklyn synth-pop duo Prince Rama ask their audience a simple question halfway through their new LP, Xtreme Now. "When was the last time you had fun?" On the record, it's supposed to be a question about belief, about conviction, and about our response to that in a positive and nourishing manner. I… Live Review: The Joy Formidable with Everything Everything at Neumos 4/2/16

If everything else in the world seems to be going crazy at the moment, take solace knowing that The Joy Formidable still shamelessly tour with a gong. The Welsh trio's stage presence has always been one that's far larger than whatever venue they're playing in – inside or outside – and the gong that…