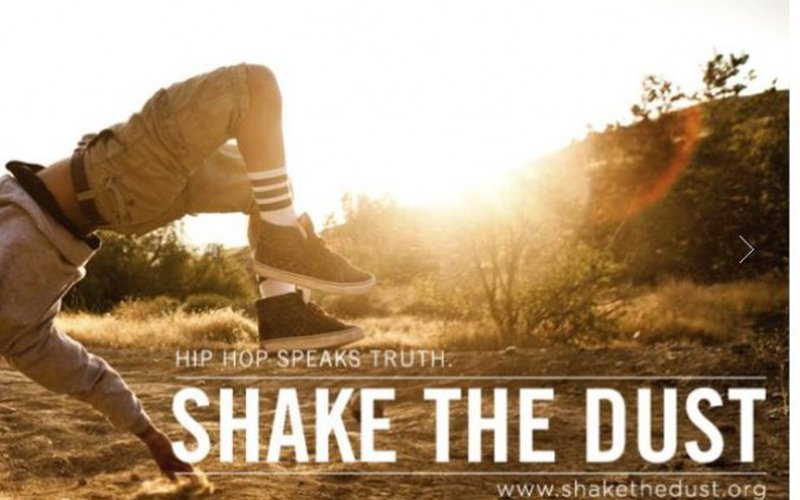 A world premiere of Shake the Dust was well-received from very excited local b-boys, b-girls, DJs, and music lovers at the Egyptian Theater that SIFF is now managing. The movie was beautifully photographed and equally, the soundtrack was excellent. I was happy the mix was loud and clean with a mixture of original disco and hip-hop classics. The music score was well executed by Seattle-based composer Sean Dimond.

Shake the Dust opens with breakdancing footage, shot by Thomas Edison in the Middle East in 1898. This feature-length documentary takes you closer to the world of breakdancing and the life of b-boys and b-girls. From the ghetto of Colombia, Cambodia, Uganda, and Yemen, filmmaker Adam Sjöberg follows the dancers, DJs, and hip-hop artists. Their stories of life and philosophies are told in their voices and display their incredible dancing skills. Executive producer and rapper NAS also provides original music for the film.Breakdancing is a language of human bodies, a reflection of the unique style of each individual. Today, on the streets of our planet, you will find b-boys and b-girls breakdancing. They spend every minute of the day or night, practicing to perfect their skills. The skills to survive on the street of the ghettos, skills to make those impossible moves, skills to not repeat the same mistakes, skills to be a better person, skills to teach others how to find themselves, and skills to love one another. These skills shape the style that defines one's uniqueness from others.

In 1980, hip-hop and breakdance came out from the slum ghettos of the Bronx, New York. Life was hard and dangerous, with not much hope of a better tomorrow. Those who were born in the ghetto decided to create something of their own that nobody could take from them. This is known as hip-hop today. Just like blues was the voice of slaves and jazz was dance music of the minority, hip-hop became the voice to tell life stories of this generation, in order to forget life's hardships. After nearly four decades, hip-hop music and culture is now everywhere on this planet today. "Tell me if you know any country where kids are not into hip-hop. It has even appeared in places without electricity," says Don Popo, from Columbia.

“Real kings and queens of breakdancers live on the streets of the world and they speak a language of hip-hop,” states one of the the participants.

"I may not have what you have, I can do what you can do," AJ, a hip-hop artist from Yemeni states. AJ calls himself old-school and loves Sugar Hill Gang, Grandmaster Flash, and Kurtis Blow.

“You can't separate breakdancing from hip-hop,” says KK, who teaches breakdancing to young kids on the streets of Phnom Pehn, Cambodia. “Hip-hop is the soul of the people, the voices and music that embrace the people's hearts.”

B-Boy Full Moon Uganda recalls his early life as a kid without any money. He used to sell drugs to survive in the ghetto. He saw many people lose hope and started using drugs to escape from a hopeless life. Many of his friends who used drugs never survived.

The breakdancers are also resourceful. A dancer from Kampala, Uganda, breaks with the sound of African Drums and without electricity. The dance floor is handmade over bare ground and covered with a plastic sheet.

DJ Fresh, a Colombian ex-disco dancer, couldn't find any hip-hop on the streets of Bogota, so he started his own party with his own sound system. He has been promoting hip-hop since.

B-Boying isn't for money or fame, but about sharing and teaching others positivity, comradeship, brotherhood and sisterhood, and good energy. Hip-hop is something everyone can take part of.

Rock'n'city Crew takes breakdancing into the heart of Bab Al city in Yemen, a very traditional city with old customs. It is a place where hip-hop and breakdancing are virtually unknown. Rock'n'city Crew were anxious, and expecting rocks and tomatoes to be thrown during police interruptions during the breakdancing. Yet they were unafraid and determined to do their show.

The dancers dream about winning the World Championship of Breakdancing, but most of them have their heads to the ground. They know the differences between dreams and reality. They feel more fulfillment from sharing their life stories, and love of breakdance and hip-hop in today's society. Perhaps someday, breakdancing will be an event in the Olympics. Who knows?

Tibisay, a eight-year old girl, knows that she wants to be a breakdancer. She started breakdancing after watching her father practice everyday. It became Tibisay's passion to work hard. Improving was easy for her. Shake the Dust shows us a clear consciousness of positive attitudes in every one of the dancers, despite the fact that they are far from each other and separated by countries. The breakdancers are all connected by music, dancing, and the appreciation to the lives they all lead. They discovered hope that never existed in their lives. Their transformations didn't come easy for them. In the end, the breakdancers discover the discipline to respect others and to respect themselves. Shake the Dust is an important documentary about hope — hope for the future of all.

Q & A with Adam Sjöberg

Can you talk about the soundtrack in detail?

Our soundtrack is designed to complement the global nature of our film, represent hip-hop history as a whole, in particular the poetic social-mindedness of some of the best hip-hop. Shake the Dust includes a colorful array of global hip-hop artists from Egypt, Syria, Uganda, Cambodia, and Colombia as well as hip-hop greats who we are working to include in the final cut like Common, Talib Kweli, and our executive producer, Nas, who is also working on an original track for the final theatrical version of the film.

Is there music credit for Shake the Dust?

In addition to the layer of global hip-hop and iconic rap highlighted in the film we engaged a super talented Seattle-based composer named Sean Dimond, with whom I have worked before. Sean has always drawn inspiration and musical textures from world music and has different regional influences. Sean’s score does an excellent job balancing the energy of our story and hip-hop beats with a subtle electronic texture — pulling from instrumentation and vocal samples representative of the cultures and countries in the film.

How did you find the breakdancers?

That’s a very good question — and not a super quick one to answer. But the best answer is that I found them through YouTube — and then once I connected with Breakdance Project Uganda and got to know those guys, the community of b-boys and b-girls around the world opened up. As a general rule, whenever I went to a place anywhere in the world, once I befriended one b-boy, I was pretty quickly introduced to them all because it’s such a tight-knit community. Additionally, I often worked with non-profits from each of these places which was a great way to get connected to the local scene — especially the work they’re doing to better their communities. I have been shooting this film for six years, so there was also a growing amount of underground street-cred and a report that I gained from the footage and clips I was sending out. This film was always about giving kids in the slums/hood a chance to have a voice and so it wasn’t hard to get the breaking community rallied around this project. Everybody has a voice. Everybody wants to be heard.