Decibel Festival's Optical showcases serve to remove the notion that electronic music is simply made for dancing. Instead, they present an array of musicians who specialize in everything from neo-classical to drone to ambient to horror soundtracks. For its 10th anniversary, Decibel brought back beloved German composer Nils Frahm, whose performance last year with CFCF brought the crowd to a mediative standstill, as well as Iceland's Ólafur Arnalds. Both musicians fall into the neo-classical realm without escaping the experimentation of additional electronics or the influence of today's beatmakers, each perfecting blend of ancient classical pianos, postwar synth manifestos, pensive ambient spiraling, and contemporary head bobbing bass. Both performers released music through Erased Tapes, a label who boasts many such genius composers and performers. Clearly enamored of each other's music as well, they not only performed their own pieces, but they joined each other on stage, an addition which made all the difference.

Nils Frahm is a very funny man. He uses his ability to make the audience laugh as a way to draw them into the drama of his work, and so his set begins with some jokes, charging us for the emotional journey ahead. If comedy and tragedy are two faces of the same coin, then Frahm's set, or perhaps simply his personality, is perfectly balanced between the two.

I say "journey" because the set created an arc in my mind. As surging synths began, notes fell off like ice from a shuttle to space. We were being projected and brought into a place that was not our own, a space we did not own nor could comprehend if someone, like Frahm, did not take our hands and bring us there. After the initial entry, all went quiet. Though the synths reminded me of space age music - the kind of music that soundtracked films about of the universe - I found that what we were entering was actually the space of Nils himself, one that encompassed all that Frahm is and was and will be. His quiet minimalist piano pieces were heartbreaking, but frankly less heartbreaking than the frustrated note that Frahm slams down throughout his performance of this piece. Try as the note might, at Optical it could not transform itself. It was only when Ólafur Arnalds entered the stage - and shared a moment of laugher as the two cheered glasses of wine - that the note began to escape itself. Arnald's stage presence is so very different from Frahm's. Where Frahm strains, his eyes closed and veins on his neck pop forward in a kind of desperation, Arnalds elegantly shifts his fingers, his gaze, everything about his posture, in slow tranquil motions. Arnalds' helped Nils out of the note, adding delicate layers before leaving the stage.

For a while, we were kept there, inside Frahm's frustration, inside a sadness that had moved from minimal to overpowering. At some point though there was a shift, when back at the synth Frahm slammed back to earth. It was an incredible ride, as synths erupted and screamed forward, beats making themselves visible, and the music itself felt on fire. But the sudden arrival was not enough for Nils. The synths died out and, returning to the piano, we found ourselves with the sound of cars rushing by a confused and lonesome person, perhaps left on a rainy highway after being abducted. It was here that Nil's revisited earlier pieces, sad ones, minimal ones, desperate ones, and rather than abandoning us there, he helped us forward, building for us in his music a beautiful new world. Where many performers work with individual pieces and broken themes, at Optical Frahm presented a portrait of himself as an artist, one who is unwilling to abandon his listeners inside his art, one who is unwilling to be predictable, one who draws out each necessary note and current. 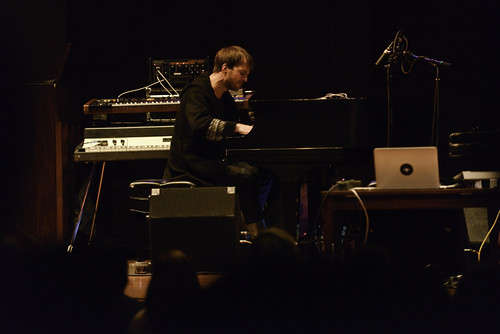 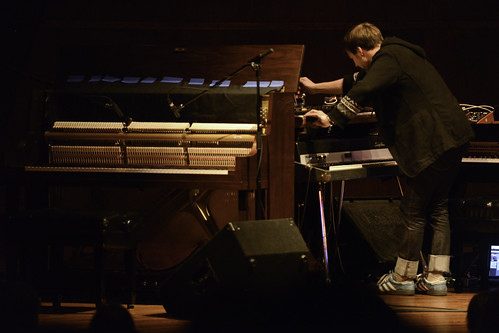 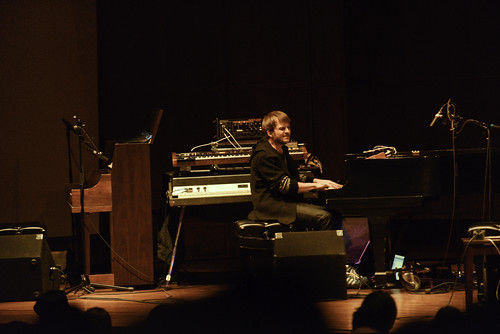 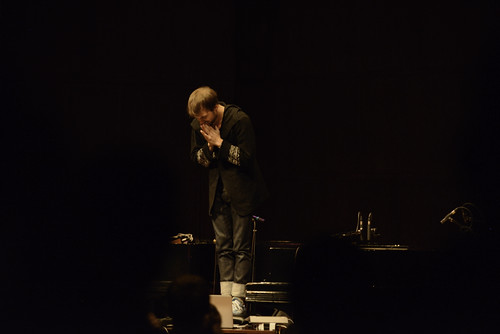 As Frahm left the audience, we entered a much needed intermission so we could clear our minds before the sweeping cinematic compositions of Ólafur Arnalds. The Icelandic composer began with an exercise - having the audience sing C, which he then looped into his first composition. Again, Arnalds was quite the hilarious host, joking around about having barely slept. Before beginning "Poland", he explained that the roads in Eastern Europe are bad for sleeping, so they found themselves drinking on the tour bus. Unfortunately, that turned out to be equally as bad, and when they finally reached Poland he composed this song. "There are many ways to feel sad, not just about love," he said, laughing quietly before launching into the wrenching track.

At one point, he discussed having taught a workshop, with very little sleep, earlier in the morning, explaining how he does something actually changed the way he does it. This seemed apt, for Ólafur Arnalds' music comes together like so many puzzle pieces on the stage. Where will that violin come in? Before it does, and as it does perhaps another piece drops off, eventually allowing the violin to take it's own route through a dramatic solo. Electronics provide both looping and heavily broody bass lines throughout, accompanying as a perfect compliment to the live instrumentals.

One part of the puzzle we were able to see at this performance was the addition of live vocals by friend and vocalist Arnór Dan (Agent Fresco) for the songs "For Now I Am Winter" and "Old Skin". Although Arnalds' music does not necessarily need any vocals to be entirely consuming, this time they did add an unexpected element to the music for me. Transcending simple swells and ambient based pop/classical, Arnór's vocals are breathy, passionate, and unexpected. He surges at all the right moments alongside the music, serving as another part of the composition to compliment and enhance the overall feeling of the performance. Not to mention that alongside the focused gazes of the violinist and cellist, with Ólafur and his delicate concentration, Arnór's simple movements on stage add much to the visual presentation. Each piece of the puzzle moved exactly to provide room for others where needed, or to surge forward in a dramatic crescendo. 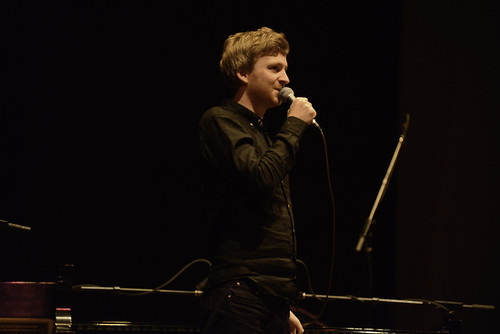 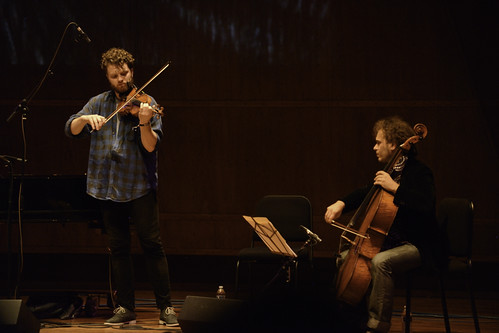 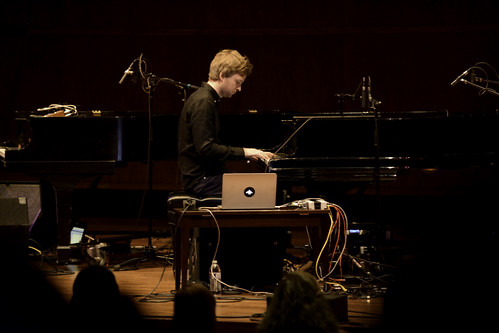 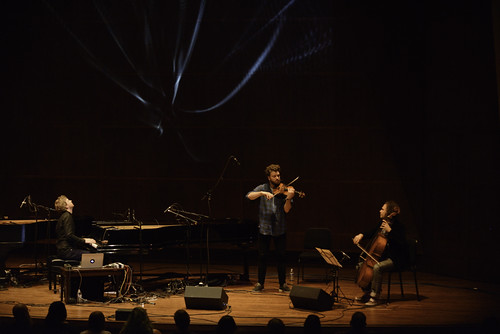 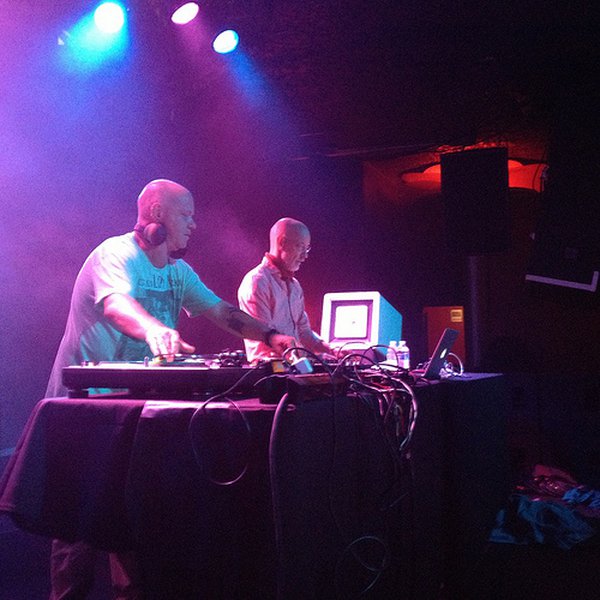 Saturday, September 28—day four of Decibel Festival 2013—found me headed back to the Showbox at the Market, this time for the Cosmic Adventures showcase, featuring The Orb with the godfather of techno Juan Atkins and newcomer Nick Monaco. The Orb was perhaps the act I was most excited to see at t... 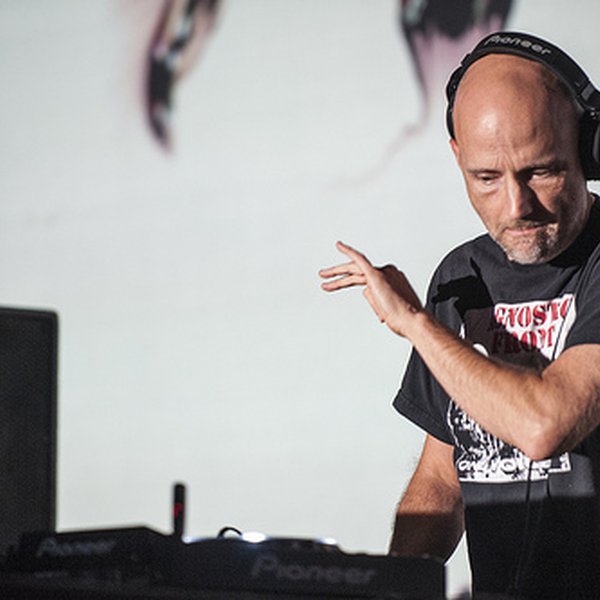