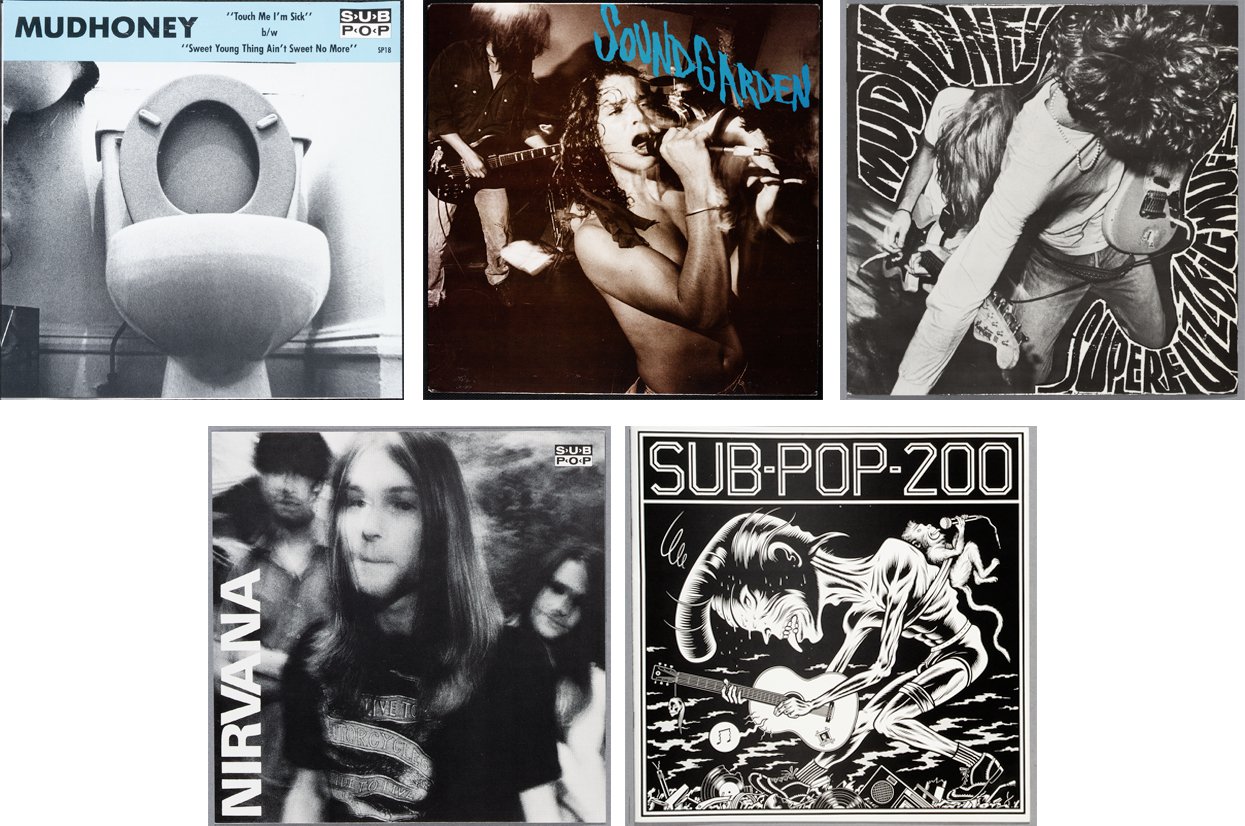 From its early days as a record label, Sub Pop had a unique voice, and a unique brand and logo to go along with it. Founder Bruce Pavitt credits Sub Pop's previous iterations as a radio show, zine, and music compilations as helping to give the label a boost of name recognition. In Sub Pop Stories 2: Branding and Design, we take a look at some of the photos and album covers that helped launch the record label in the late 80s, giving it an eye-catching visual style from the start.  Seattle’s Museum of Pop Culture, or MoPop, has opened up their extensive vault of oral histories, allowing us unprecedented access to first-hand stories from the people who lived it. In this episode, we look at the branding and graphics that helped define Sub Pop's style from the start. 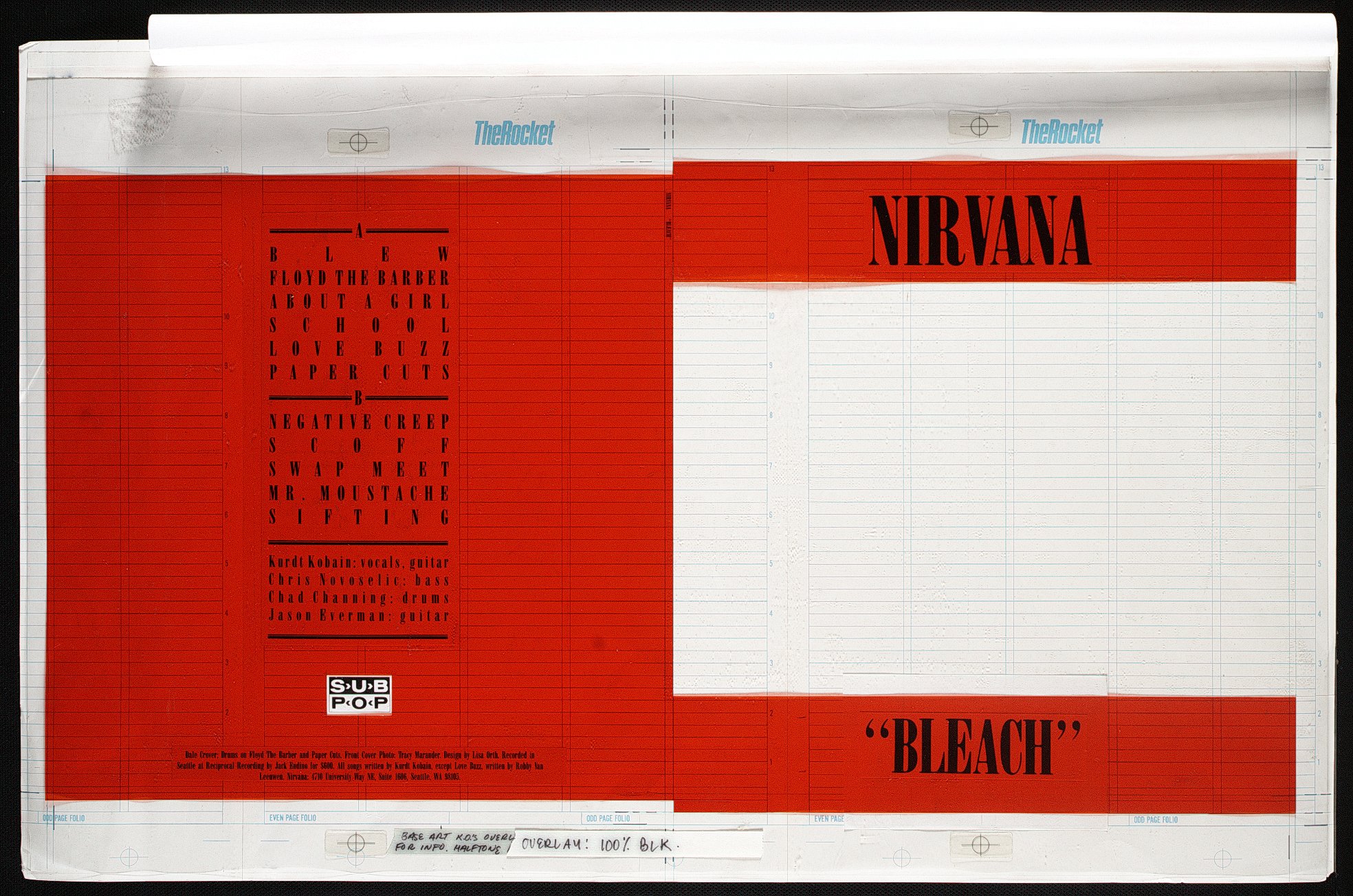 Bleach album cover layout, 1989. The album cover was designed by Lisa Orth, who asked Grant Alden, typesetter at the local music magazine The Rocket to produce the band and album title type. He used the typeface that was already in the typesetting machine: Bodoni Extra Bold Condensed. Thus Nirvana’s iconic logo was born, entirely by accident.

"I think one of the things that really distinguished Sub Pop was its emphasis on branding. And some of that occurred organically, just through the multiple uses of the name Sub Pop itself. It was a radio show, it was a fanzine, it was a column. The name just got used over and over again. And I felt that by the time we actually started putting out records, the name Sub Pop had really gotten around. I’d been working with Sub Pop as a conveyor of information since 1980, so in effect because the project kept morphing and kept recycling itself, it was naturally, I was naturally creating a brand." 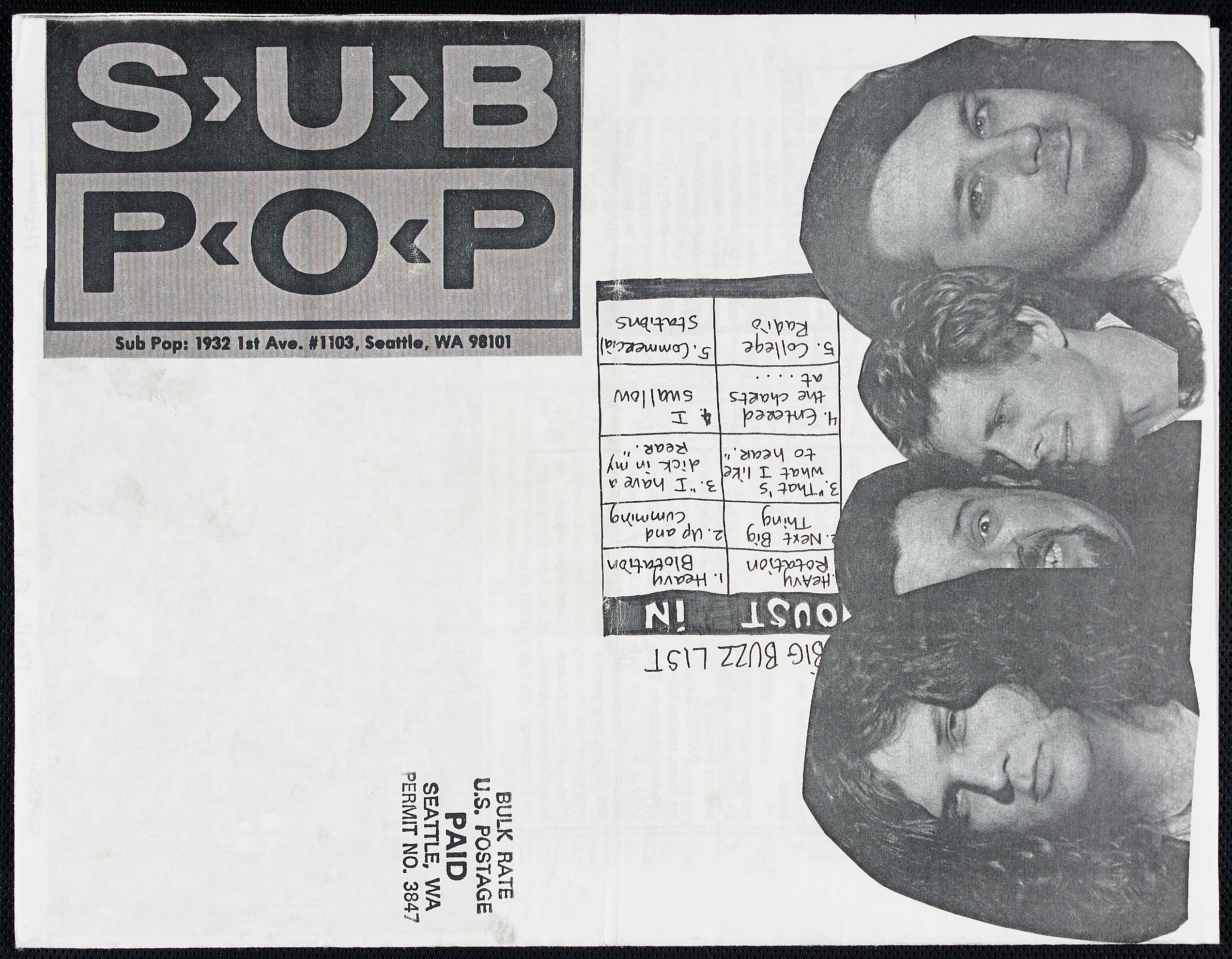 "There was this record label, a jazz record label called Blue Note.  And I was a big fan of Blue Note record covers. [...] At the time it was very obscure and only jazz fans and other illustrator and designer geeks seemed to know about it.  But it was, like, for my money, the most important graphic campaign I’ve ever seen in the last half of this century.  I think it’s, like, incredible! And Reid Miles, the guy who was the art director, designed all these things, churned these things out overnight.  He was dealing with budgets of zip.  He was working for an underground elite.  I mean, it basically had all of the same subtexts that punk rock did, except it was jazz.  You know, they were all junkies, all the standards were the same.  It was the same scenario, except it was jazz and not punk rock.

So you can see a heavy influence of typographic style and color treatments on my early work for Sub Pop.  What I was trying to nail down was a look that was distinct, that was clean, that was incredibly bold and forceful.  That’s where Charles Peterson’s photography came in.  I mean, he was just like…one thing I learned working at The Rocket is certain photographers, they were so good, they made your job easy.  It was like, you had this sledgehammer there that you could always bop somebody with if you had a good photographer.  And Charles was unequaled.  And so, being able to use Charles’ photography whenever I was able to just made the job so simple, you know?"

Learn about the influence of a then-obscure jazz label on Sub Pop's graphic designer Art Chantry, and the challenges Charles Peterson faced when taking photos from inside a mosh pit. Hear how art director Jane Higgins had to keep her designs loose to match the styles of Sub Pop's early bands. And get some insight into the origins of the distinctive black and white Sub Pop logo that adorns so many albums, t-shirts, and posters.

"Sub Pop Stories 2: Branding and Design" is part of the From the Vault documentary series, made possible thanks to a generous gift from Paul Allen, and in cooperation with MoPop. It was written and produced by KEXP’s Isaac Kaplan-Woolner, with assistance from Julian Martlew and Owen Murphy, and is hosted by KEXP DJ Sharlese Metcalf.