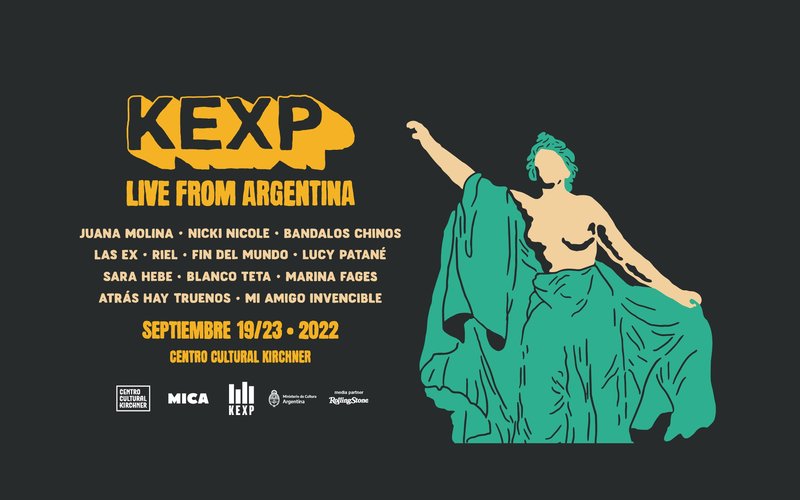 For over a decade, Seattle-based public broadcaster and music discovery nonprofit KEXP has been traversing the globe to broadcast and record live sessions. In May, KEXP announced their first trip to South America for a week of live performances and a remote broadcast from Buenos Aires, Argentina. KEXP Live from Argentina will take place on-air and online September 19th through 23rd. Listeners can tune in at 90.3 FM in Seattle, KEXP. ORG and the KEXP Apps, and performances can be viewed live on KEXP’s YouTube channel.

After an exciting and exhaustive process of listening to more than 150 artists from different Argentine provinces and several musical genres, KEXP and its team of musical curators have announced the selection twelve musical projects that will present Live on KEXP sessions from one of the largest cultural buildings in South America, the Kirchner Cultural Center.

The artists who will join KEXP Live from Argentina are: Virtuoso guitarist, composer, producer, and record producer from Buenos Aires. With more than 30 albums as a music producer, in 2019, she released her first solo album, awarded at the 2020 Gardel Awards as "Best Alternative Rock Album." Lucy Patané was part of key bands in her country, such as Las Taradas, El Tronador, and La Cosa Mostra. She co-founded Mercurio Disquería, a fundamental independent record store in CABA. Singer and songwriter from Patagonia and one of the biggest voices in Argentinian rap and urban music. She began her career playing hip hop, cumbia, and dancehall, but also fuses genres such as funk dance, reggaeton, punk rock, and drum & bass. Her discography includes La hija del loco, Puentera, Colectivo Vacío, Politicalpari, and her most recent work Sucia Estrella, which has collaborations with Ana Tijoux, The Colorated, Sassyggirl and Rattlesnakke. Her lyrics focus on “Cancion de protesta” (protest song) and also speak about love, sex and everyday situations. Ambassadors of the current Argentine indie-pop scene and an essential band of the generational renewal of Argentine and Latin American rock. They have released five albums Bandalos Chinos (2012), BACH (2018), Paranoia Pop (2020), Feliz Navibach (2020), El Big Blue (2022), and the EPs Nunca estuve aca (2014), and En El Aire (2016 ). Bandalos Chinos have won 2 Gardel awards in the Best Pop Album category for their albums BACH and Paranoia Pop (produced by Adam Jodorowsky). They were also nominated for a Latin Grammy in the Best Alternative Album category for their album BACH and best recording engineering. Shoegaze duo from formed by Germán (drums) and Mora (guitar + vocals). Their avant-garde music centers on dream rock with garage vibes, indie, and noise rock mixing other genres with their own personal style. After four studio albums, two EPs, and tours all around the world, the band releases two new singles, “1990” and “Blanco & Negro” that fuse their indie rock sound and their characteristic noisy side with the softness of dream pop. Both songs are a preview of their upcoming album. In 2022 Riel gets ready to return to the studio. The band continues to polish their sound with new instrumentations and experimenting outside the duo format, now as a power trio with Estanislao and even as a quartet with new guitarist Federico Stuart. With this lineup, they will be playing the Primavera Sound Buenos Aires festival this November. An experimental rock project, with the aggressiveness and simplicity of punk but with a great twist: relentless distorted noise soundscapes, edgy performances, transfeminist concept with an avant-garde approach. Based in Buenos Aires, Argentina, born in 2017 with the need to find a unique sound with an atypical formation, given by the presence of the processed cello. Blanco Teta is made up by Carola Zelaschi on drums, Carlos E. Quebrada on electric bass and Violeta García on cello. They released their first album BLANCO TETA on cassette in 2017 under the record label TVL REC and in 2019 they recorded their second album which was released in March 2020 through the label GOZA RECORDS. They are now working on ROMPEPAGA, their third album. An alternative rock band formed in 2015 in Mendoza, Argentina. The band is made up of Laura Velazquez (vocals, rhythm guitar, keytar), Camil Guevara (lead guitar, backing vocals), Lina Elias (bass, backing vocals), and Charly Goudailliez (drums). They come from- and represent- the enormous transfeminist and underground queer music movement that boomed in Argentina in 2010. Their music draws in elements from punk and surf rock, with influences like Le Tigre and Pixies. Primera Temporada (2015, Discos Rebeldes) and Depreciosa (2019, Goza Records) are their two studio albums, with singles like “Reina”, “Vómito”, “Me escabié” and “Novias”. A band from Buenos Aires formed in 2019, with roots in the southernmost region of Patagonia: Tierra del Fuego and Chubut. Their music invites us to travel both places through melodies, lyrics and instrumental passages that combine an indie sound with nuances of emotional post-rock. While their first songs released in April 2020 became the soundtrack of our strange days of isolation, their second release looks for other musical directions to demonstrate that the “end of the world” is also the beginning of a new stage. The band is from Mendoza, Argentina, and was born in 2007. They are one of the most emblematic bands of the musical renewal of South America. They released 7 albums, 8 EPs and multiple singles that built a work that links the avant-garde global indie-rock with the Latin American rock beat. On their last albums, they worked together with the Californian producer Luke Temple in “Dutsiland” (2019 Crack records) and the EP “Nuestro Mundo” -"Our own World"- (co-produced by the Argentinian Charlie Desidney). This year they will release their 8th album, produced by the Uruguayan musician Martín Buscaglia. The kraut rock band was formed in 2006 in a square in the suburbs of Neuquén, in the Argentine Patagonia. In their music, there is noise and nuances; electric riffs and arpeggios; uncontrolled atmosphere. In 2016 their album "Bronce" was awarded the best album of the year by the Página 12 newspaper. Throughout their career, they shared the stage with artists such as Yo La Tengo, El Mató Un Policía Motorizado, Rosario Bléfari, Los Reyes del Falsete, Mi Amigo Invencible, El Príncipe Idiota, Las Ligas Menores, Amor Elefante, among others. Multi-disciplinary artist from Buenos Aires who works as a singer, guitarist, composer, muralist, and visual artist. In her music, indie-folk, punk rock, and experimental arrangements coexist easily. She grew up in Tierra del Fuego, which was the elemental fuel that led her to paint landscapes of forests and rocks, as well as the howls of guitars, voices, and flutes that, in her compositions, resemble the constant wind of Patagonia. In her 10-year musical career, she recorded three albums and made tours, exhibitions, and murals in Latin America, Europe, and Japan. While developing her fourth studio album, she opened for Metallica this year and is preparing to be part of Primavera Sound Buenos Aires 2022. 21-year-old singer, songwriter, and rapper Nicki Nicole brings R&B and soul to Argentina's exploding movement. Nicki got her start in the Rosario freestyle scene and has established herself as a rising star with her latest album ‘Parte De Mi.’ Nicki showcased the album as the first Argentine artist to perform on The Tonight Show Starring Jimmy Fallon as well as a breakout performance at Coachella 2022. Nicki's album highlights her genre-dexterity featuring hits “Sabe” with Rauw Alejandro, “Pensamos” with Mon Laferte, "Toa La Vida," “Baby,” and the title-track “Parte De Mi”. The Guardian praised Nicki as "The star defying Argentinian rap's macho culture." A master of mysterious experimental pop, Juana Molina is recognized as one of the most original and visionary artists around. Her career trajectory has been a unique one, from her initial success as a massively popular comedic actress in her native Argentina, to the abandonment of her television career in 1996 and her decision to devote herself to forging her own, inimitable style of music, which gained her worldwide recognition as a critically-lauded recording and touring artist.

Juana Molina has played a significant role in KEXP’s history of engagement with Latin American music scenes. Over the years, Juana has visited Seattle on several occasions. KEXP has closely followed each of her fruitful steps as an icon of the international experimental scene. Molina has recorded two Live on KEXP sessions, one in 2014 and one in 2017, but has a relationship with the station going back to 2005, when she recorded an audio-only performance, prior to the creation of KEXP’s YouTube channel. Having Juana Molina join KEXP live from Argentina completes a full circle of love for music and takes another step in a long musical friendship.

The KEXP Live from Argentina project came together with support from Argentina’s Ministry of Culture and the Kirchner Cultural Center in Buenos Aires, as well as a media partnership with Rolling Stone, which will be publishing supplemental content alongside KEXP’s week of programming and publication of Live on KEXP sessions. The programming is centered on Argentine musicians performing in a wide range of genres, sharing their music to a global audience of millions on YouTube and a broadcast audience in the Pacific Northwest and worldwide.

KEXP hosts Cheryl Waters, Albina Cabrera and DJ Chilly will be broadcasting live audio and video from the Kirchner Cultural Center, with live radio broadcasts all week and three Live on KEXP sessions per day on Tuesday September 20th through Friday September 23rd. Performances will take place throughout the Center, with live streaming on YouTube, and many broadcast live on KEXP radio. The presenting partners will also collaborate on a learning session for university students to take place on Monday, September 19th.

Read more about KEXP live from Argentina, a project made possible in collaboration with Argentina’s Ministry of Culture, Centro Cultura Kirchner, and Rolling Stone Magazine. 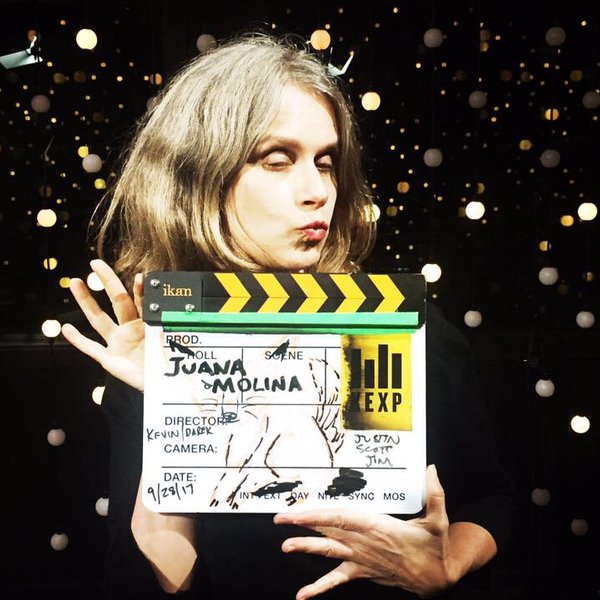 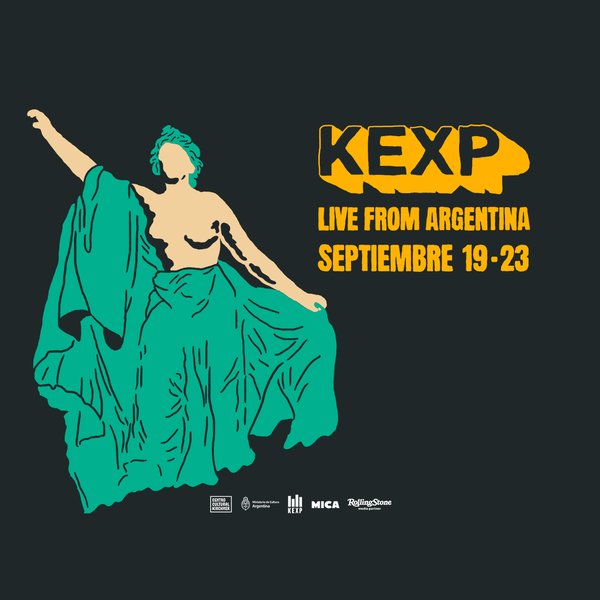 With collaboration from Argentina’s Ministry of Culture and the Kirchner Cultural Center, KEXP will present a week of live performances and radio programming in Buenos Aires, September 19th-23rd