This year marks KEXP’s 50th anniversary. In 1972, four students at the University of Washington in Seattle started a college radio station called KCMU. The station eventually left the University of Washington and became what is known today as KEXP. We kicked off this yearlong celebration on January 5th. Throughout the day KEXP DJs played music from 1972, the first year we were a radio station. To hear what those early days were like, I caught up with Leroy Skeers who goes by the name Leroy Henry on air. He DJed at KMCU from 1972-1975. He went on to work at the radio stations KZOK, KZAM-AM (when it was playing new wave and punk) and KEZX. He was also a music supervisor for Starbucks while working for PlayNetwork.

KEXP: Take us back to 1972. What was the landscape in America and in Seattle like that year?

LEROY HENRY: Well, there was still a lot of tension going on because of the Vietnam War. It was starting to wind down, but it would be a couple of years before it really would. So there was kind of a cultural revolution going on. A lot of tension between generations, between the boomers and our parents and between demonstrators and more conservative people. But all this cultural tension, it caused a genesis in music [you started to hear] better songs and different kinds of music and longer songs. Artists were coming up with their own compositions and things were really expanding. The '60s were so turbulent and it went so fast. JFK was assassinated, Martin Luther King and Robert Kennedy, and things were just moving really quickly. And then I think in the '70s, things started to slow down a little bit.

Well, we didn't have rotation, which was a beautiful thing. We were allowed the freedom of choice to groom our own style and play our own kind of music that we wanted to.

What were the popular songs at the time, if we were to kind of take a sonic landscape to 1972?

It was very eclectic. There was a lot of folk rock singer songwriters going on like John Prine, Crosby, Stills, Nash and Young, Al Stewart, we helped break him in the Seattle area. Bonnie Raitt, Randy Newman, Paul Simon, Joni Mitchell, Van Morrison, Jackson Browne. And some pop rock, Elton John, Steely Dan, Chicago. Some really good soul and R&B at that time, like Stevie Wonder's Talking Book album was huge in '72, Al Green, Marvin Gaye, Bill Withers, O'Jays. And, of course, we played a lot of classic rock from the '60s and then new stuff that was coming out — David Bowie. Ziggy Stardust was the big hitter that year, Allman Brothers, of course, Beatles and Stones, Yes, and Rod Stewart was still rocking before he went disco. But we also played a lot of progressive rock like Pink Floyd and Jethro Tull. We didn't play much classical or country, as I recall, but we played some really good jazz. There was a lot of progressive jazz happening at that time, like the Mahavishnu Orchestra, The Crusaders, Billy Cobham, and then a label called CTI that that had George Benson and some other artists like that. It was really soft, progressive jazz with lots of strings and reeds, and it was really a cool time for jazz. And, all of those things could be mixed into one show, you know, not separate shows. It was just very eclectic. And we kind of went with the moment and maybe we'd throw in some comedy from the Firesign Theater.

What was the local music scene back in 1972 in Seattle? I mean, obviously, this is before grunge, before Seattle really hit the national scene for our music. But what was it like in 1972? What local bands were you hip to at the time?

There was a good dance scene at the bars like the Rainbow Tavern, the G Note, The Walrus, and it was kind of a blend. The Seattle sound at that time kind of ended up being kind of a rock and roll blend of R&B, rock and jazz, and tended to be dance music because that's what people wanted when they went to the bars and had a couple of drinks. A lot of really great bands and a lot of great artists. There also was the folk thing going on. I can't really recall anybody who really made it until, well, of course, you know, there was Jimi Hendrix, but that was earlier. I can't think of anybody who really made it until Heart hit in 1975.

Celebrate KEXP's 50th anniversary with us all year long. As we celebrate this milestone, we’ll spend some time looking back, but we’ll also be looking forward. It’s going to be a lot of fun! Join us here for updates and new features throughout the year. Thank you for powering KEXP for 50 years. 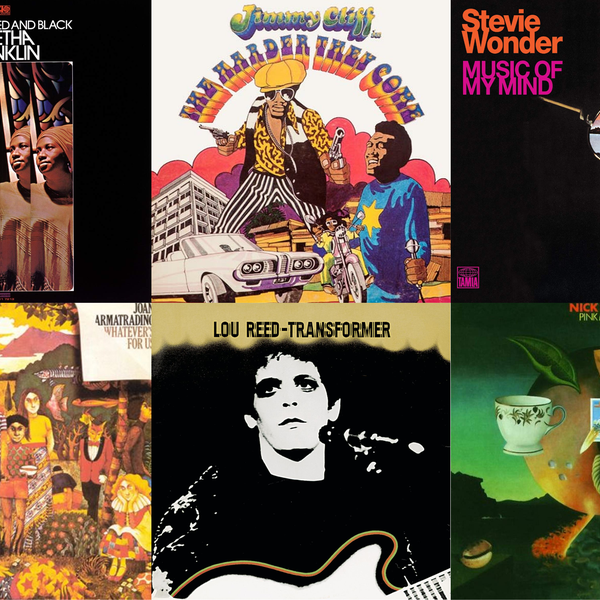 As KEXP kicks off our 50th anniversary celebration, DJ and Director of Editorial Larry Mizell, Jr. rhapsodizes on the music released the year our station was founded.