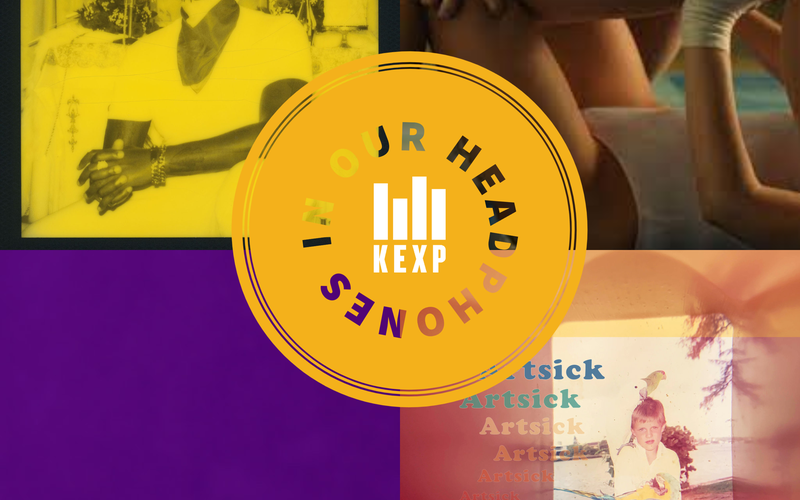 Each month with In Our Headphones, members of KEXP's Digital Content team share the music that's resonating with them right now.

Listen to audio of the staff sharing their faves below, as heard on KEXP's Sound & Vision airs every Saturday morning from 7-9 AM PT. You can also hear more stories in the Sound & Vision Podcast. New episodes are out every Tuesday and Thursday. Subscribe now.

As I was writing my salvo on Haitian flag-shrouded uber-MC Mach-Hommy and the nature of the classic rap album, he dropped another outstanding project as the sand drained from the cracked hourglass of 2021. While I was applying layman’s auteur theory to a record that prominently features the lyric “dickin’ down Oprah” (Supreme Clientele, 2000), the Haitian American linguist was offering his most starkly personal work to date.

Appropriate that, after the widespread accolades for Pray for Haiti, Mach opens Balens Cho (the title of which translates to “hot candles”) with a victory lap of sorts over trumpets singing triumphantly. He brags of cross-table handshakes being reached quicker than San Pellegrino takes to fizzle out in a glass and reminisces over the lemon orchards he came from. On “Labou,” Mach’s expressive hook which begs to be memorialized in Twitter bios — “I GOT IT OUT THE MUD, SWEAR TO GOD” — is served piping hot alongside references to government phone taps and Shep from the 1994 film Above the Rim.

Tied together by short, cartoonish audio snippets offering glimpses of the exploitation of Haiti, Balens Cho finds Mach splitting the difference between cryptic and confessional; enigmatic turns of phrase augmented by crystalline glimpses into his psyche and past. As usual, he’s self-referential (*sings “Watch how I put you on skates”*) and fantastically glib (“The closet got more loafers than welfare”). Just like on Pray for Haiti, he repurposes multiple Jay Z lines. He sings about ducking his parole officer and offers to teach classes over the stove top on par with Le Cordon Bleu.

Over the lurching bass and foreboding organ of “Magnum Band Remix” — supplied by dearly departed genius beatmaker Ras G — Mach crafts a form-perfect rap verse from beginning to end, referencing his now-infamous penchant for privacy and pairing it with his granular knowledge of NBA trivia (“Try to be a man of mystique and keep it wild low / ‘Cause they don’t wanna see your son ball like C. Ceballos”). He recites the link between DMCA takedowns and chain snatching that had rap fans on the internet in stitches, but also drops a guffaw-worthy punchline just prior (“Send a stocky nigga in a mask like a DOOMPOSTOR”).

On a brief project with no shortage of slappers like “Labou,” “Magnum Band Remix,” and “Money Magnets,” the most intriguing songs here are where Mach reveals the man behind the flag. “Wooden Nickels” is a melancholy ballad which manages to float and flutter even under the weight of generationational hardships. It serves as a brief biography of his grandfather, a man who took care of his people and funded dreams, followed by how the generosity of our elders dries up when the dirt is pushed atop their caskets. After Mach explains the merits of carving one’s own path in spite of the expectations of others, Sam Gendel’s elegiac saxophone breaks away from the piano loop and holds a mournful note in place for nearly 25 seconds.

Guided by Conductor Williams’ downcast and gorgeous beat, closer “Self Luh” finds Mach in self-care mode, noting how “being solid put a lot of stress on the joints,” taking walks in the sun, and casting a critical eye on people who put designer clothes on their bodies and junk food like Wendy’s hamburgers and gas station hot dogs in them.

In certain sectors of rap music — i.e. the kinds most likely to be exploited by major music corporations — capitalism is the only law. Along with his cultural efforts and philanthropy geared toward building up Haiti and helping the country escape from under the thumb of colonial debt, Mach-Hommy serves as a true radical in the sometimes conservative circles of hardcore rap music. He extolls the virtues of mental health and self-care, of ancestry and community, of the need for privacy when we as music fans can occasionally ask too much of our favorite artists.

Not bad for some gibberish and monotone raps. — Martin Douglas 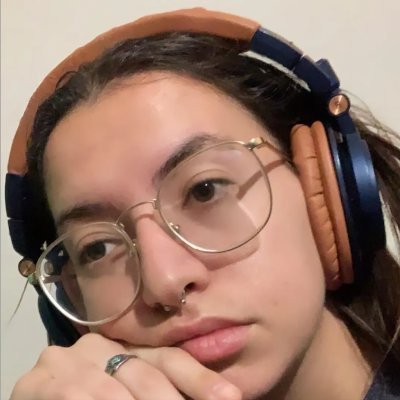 “I call it a main character playlist but it’s so much more than that, like they just take up the entire room,” explains Sam Weisband aka The Weisest Band in a TikTok video about her “Purple” playlist. Just one of the 25 themed playlists that she’s made and posted to Spotify in the past couple of years, it’s my personal favorite. Characterized as “main character energy,” the playlist is made up of film scores, ambient epics, and lush, emotional ballads. Or as she describes them, “There are certain songs that are just so elite that you cry when you hear them because they’re just so beautifully made.”

Now, I know here at KEXP we’re all about robot-free radio, so writing about Spotify playlists that I stumbled upon via a TikTok video on my "For You Page" might seem antithetical to our mission, but hear me out. These playlists aren’t based on algorithm-generated genre tags or the hottest, freshest new tracks, they’re just… vibes. And, somehow, even though “vibes” are completely subjective, Weisband completely nails them.

Like the aforementioned “Purple,” most of the playlists are color-based. There are the more obvious color and emotion correlations like “Red” for the anger playlist and “Sunshine” (not sure why she didn’t use “Yellow”) for sunny classics to make you smile (I’ve found it to be a perfect running playlist). But then there’s “Peach,” “Teal,” “Lavender,” and “Seafoam,” whose contents are not quite as apparent.

The playlist descriptions only give a very vague idea about the theme. For instance, “literally relax,” is all that’s written to introduce “Peach,” but once you get a few songs in you realize it’s a very specific type of relaxing. As opposed to the indie-based “mellow oot” of “Blue,” “Peach” is full of mostly downtempo, vibey hip hop tracks by artists like Brockhampton (RIP), Kevin Abstract, and Tyler, the Creator. I’d describe it more as a playlist that you can throw on in the background of basically any scenario with nearly any group of humans and I can’t imagine a single person being upset.

For those uninterested in mellowing out, “Orange” was made as an energy-booster and is full of thumping electronic beats made for raving and raging. While it’s not to my taste, it has made me think about what I would put on my version of an orange playlist instead. Same with “Pink” and “Burgundy” (which is not to be confused with “Red”!). It’s made me wonder why I, the former longtime burned-CD Mixtape Queen, wasn’t channeling that same creative energy into making my own variety of themed playlists.

The brown colored playlist titled “Earth” is hilariously described as “if zooey deschanel was a playlist” and covers my personal sad girl indie faves like Sharon Van Etten, Faye Webster, Haley Heynderickx, Julia Jacklin, and Hand Habits but, interestingly, I haven’t listened to it. The best part about finding this playlist-making human with relatively similar taste to me has been the music discovery portion. Where nestled amongst two songs I love, I can find a new one I’ve never heard before and then another and another. Just like KEXP, this is no robot curating these playlists — it’s a person who just very enthusiastically wants to share her favorite music with you. Some might even call that a friend. – Jasmine Albertson

The word “twee” has been all over my Twitter feed recently. Not as a misspelling of “tweet,” but in reference to the resurgence of the 2010 “twee fashion” trend. Vogue Magazine breaks it down here.

But, “twee” means more to some of us than Mary Jane flats and Peter Pan collars. The term goes back to a DIY music scene that came out of the late ‘80s, a meld of post-punk and jangle-pop, usually led by sugary-sweet female vocals. Despite its fun, playful sound, the genre is actually rooted in punk, rebellion, and a defiant feminism. It’s a revolution you can dance to. (Jacobsin has a great piece on the origins of the scene here.)

Bay Area-band Artsick are “twee as fuck,” as the saying goes. Their debut album, Fingers Crossed, released last Friday via long-running twee arbiters Slumberland Records, calls to mind many of those predecessors, like 1986’s Talulah Gosh (who later evolved into Heavenly) and definitely 1992’s Tiger Trap whose self-titled debut was released by Olympia, WA’s K Records. You've got handclaps and some Phil-Spector-esque percussion. Frontwoman Christina Riley shares the girlish tone of twee pop pioneers Rose Melberg and Amelia Fletcher, and with bassist Donna McKean (Lunchbox, Hard Left) and drummer Mario Hernandez (Kids On A Crime Spree, Ciao Bella), they’ve created an album that will continue to carry the twee tradition into the decades to come.  — Janice Headley

The moment when Argentine singer, composer, and guitarist Marilina Bertoldi performed her Live on KEXP at Home session in late 2020 was when we all heard “Amuleto” for the first time. The Argentinean night enveloped the dome of the Kirchner Cultural Center, located in the heart of the City of Buenos Aires, while Marilina opened her setlist with an exclusive song from her new album. In the session, we see the Santa Fe-born rocker seated at an intimate piano setup, presenting a ballad that talks about establishing a true connection with another individual.

Let’s not forget that this song came out in the midst of a full-fledged pandemic, when we were all completely lacking physical contact with our loved ones, making the song feel like a beautiful haven. But let me tell you — a week ago, that haven transformed into a realm of pure liberation and eroticism when “Amuleto” was officially launched to the world along with its music video. Both things revealed that this is one of the first times that Marilina has called on a collaborator, and that said collaborator is the queen of dance floor electropop herself, Javiera Mena, who sings alongside Bertoldi. Both women co-starred in a lesbian fantasy music video that, even in January 2022, deserves to be considered one of the best clips and collaborations of the year.

The official version of “Amuleto” preserves the intimacy of the ballad, merging Marilina and Javiera’s most romantic and sensual aspects. The video, directed by Gonxalo Alipaz and MICHE, portrays a dream-like scene based in an apparent reality, amplifying two icons of Latin American music, and offering us “the first Latin American video by two openly lesbian artists.”

Marilina Bertoldi’s new album, coming out in March of this year, will be the follow-up to her 2018 record, Prender Un Fuego. It will undoubtedly be one of the most anticipated rock acts of 2022 because, as Bertoldi puts it, “rock is made to be modernized and given a fresh face.”  — Albina Cabrera 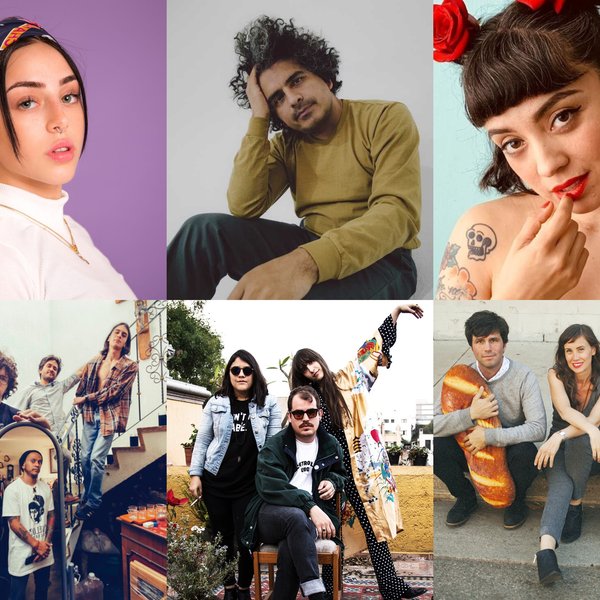 In this month's edition of In Our Headphones, KEXP's Digital Content team share the music that's resonating with them right now. 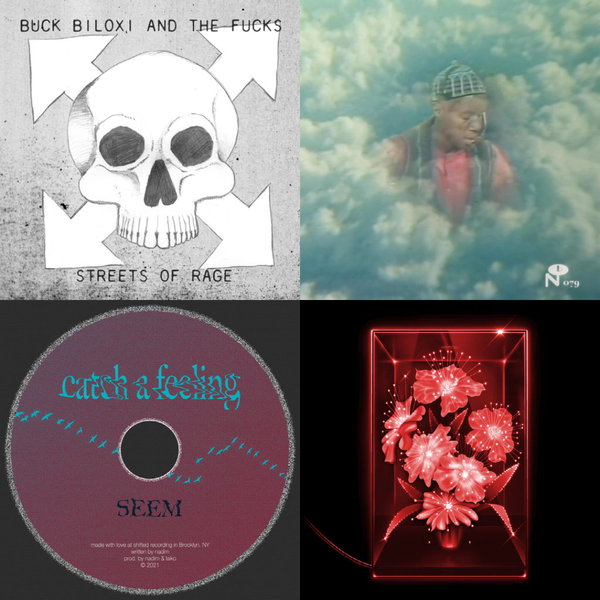 In Our Headphones: Laraaji, Buck Biloxi and the Fucks, Xenia Rubinos, SEEM

In this month's edition of In Our Headphones, KEXP's Digital Content team share the music that's resonating with them right now. 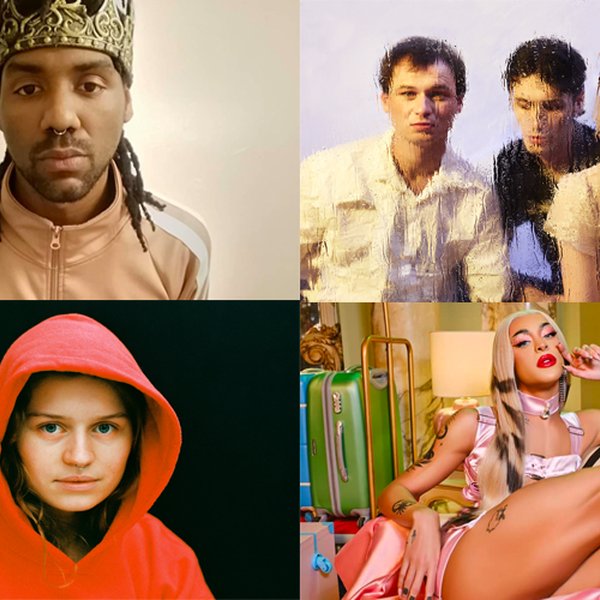 In Our Headphones: Girl In Red, Da Qween, The Goon Sax, Pabllo Vittar

In this month's edition of In Our Headphones, KEXP's Digital Content team celebrates Pride with picks from artists in the LGBTQIA+ community.