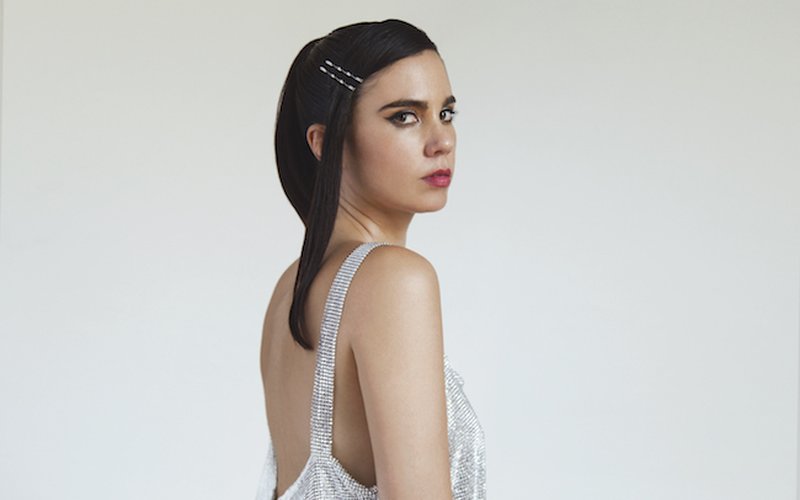 Some time ago, I shared a taste of one of my favorite electro-pop queens of all time in one of our editions of KEXP's monthly column, In Our Headphones. At the time, Javiera Mena was releasing the polyamorous ballad "Dos." That single came out as the natural balance to ones already out, such as the super danceable "Flashback" and "Corazón Astral." The thing is, all of Javiera's musical universe is a balance of electronic and unforgettable romantic-heartbreak songs. For me, she's like a living border between pop, classic love songs, and disco music.

1. Entusiasmo, her new EP, gave us the first group of songs that will be part of her upcoming album. Those five songs composed in the middle of Chilean protests known as Chile Despertó in 2019 have been only played a couple of times in Spain "pandemic style": outdoor concerts, limited capacity, socially distanced, and even virtually.

So, to know more about the new challenges, we called the Southamerican queen of electro-pop to talk about the new songs, the obstacles in the pandemic era around making an album, and the "classic" elements of Madrid vs. the "spiritual" energy of Santiago that she mixes very well into her personal cauldron when it comes to making music, a la Javiera Mena.

English transcription
KEXP: Amigx, what a pleasure to be able to talk from Seattle connecting with Spain, with one of our absolute electro-pop heroines from South America and the world. One of the artists we most admire. I'm talking about Javiera Mena, who has new music. It is always a pleasure to speak with you. Welcome to KEXP 90.3 FM Seattle, Javiera.

Javiera Mena: "Hi Albina, it is always a pleasure to speak with you. So happy as always to be here, really. So let's talk!"

The truth is that I love being able to chat with Javiera. I'll tell the listeners that one of my first albums in Spanish and from Latin American artists was Esquemas Juveniles by Javiera Mena. It has influenced an entire generation, so it's a pleasure, as always. You have new songs, the EP 1 Entusiasmo, and we wanted to start with that. How was this group of songs born? From where were they created? And why did you put them in EP format?

That's a good question, and every time I answer it, my mind comes up with different connections. The truth is, at first, it was like looking for a way not to die during the pandemic, to be able to keep releasing music. What's going on? We artists are used to the fact that we then go on tour when we release a record, which is part of the momentum. It is a business model. In other words, you invest everything in releasing a record, in the music video, which ultimately translates to having concerts, and it pays off a little. I'm getting very "business" here, but well, that's how it is in the end.

Please, tell us everything about that. The transformation that has occurred due to the pandemic also happened during your career regarding technological evolutions. I mean, taking into account more or less when you started releasing records.

Javiera Mena: Exactly. I mean, I didn't want to stop releasing music in a pandemic. I always wanted to be there. The depression from being away from people was killing me. So we decided, let's not release a record - my manager told me- we are releasing EPs because I have many songs already, I have an album. The album is there, but what changes is the presentation. How we are showing songs to people. In the end, artistically, I loved showing the album this way because I feel like people pay more attention to the songs. In this day and age where everything is so fleeting and fast and so over-informed, I think releasing an EP is very appreciated, and I liked that. It's also more like electronic music. In electronic music, the artists also release EPs, now because everything is virtual. But when I have the album, we will release the physical format with all the EPs. 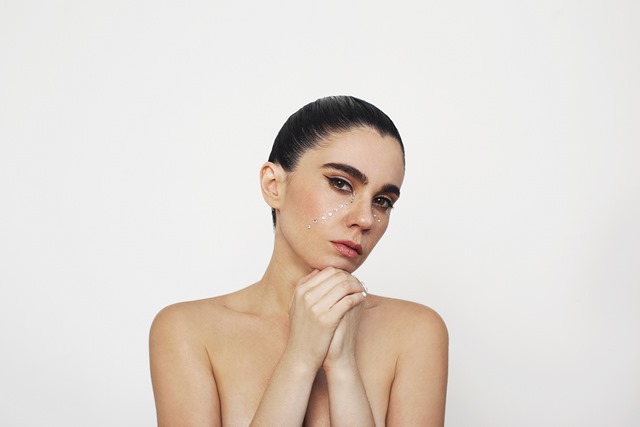 The new songs on 1. Entusiasmo were both built in composition and production alongside Pablo Stipicic.

"The EP has a concept. It has a very sensual, mature concept like a woman, mature, sensual, young adult. Adult Contemporary Pop is the concept: palm trees at night, Latin America in Europe, Europe in Latin America. Those are things that came to mind while brainstorming with Pablo Stipcic and Rod, who are my magical advisers in the world because my art is not only me", explains Mena. "Over time, I have become more open to collaborations and more open with my music."

She went from being "super jealous" with her tracks to becoming "a team leader" commercially and creatively as well, even composing with other artists. This is the case with “Dos”, which was created with the talented Mexican composer Marian Ruzzi; “Flashback” with Luis Jimenez from Los Mesoneros, and “Pasión AKA Ilusión” with María Talaverano from Cariño. In addition, the Chilean artist again turns to musical collaborations with Andalusian Chico Blanco in "Diva." "It's a desire to evolve," she explains in regards to sharing creativity with others and assures that it is a process that she enjoys more and more every day.

English transcription
KEXP: Going back a bit to the 5 tracks included on 1 Entusiasmo and starting with the composition of the songs, where were they composed? In other conversations, you brought up Chile and also the Chile Despertó protests. Although we listen to these songs and what we want to do is dance from the very first tracks of the EP, I would like to know how these songs were born or composed?

Javiera Mena: Yes, they were created during the protest. I feel like there was this energy of collapse, not only political but also personal, in many people. I even had some family issues then that fell apart. So there was that feeling, like being born again from the Phoenix's ashes. That is very present in this album. Although the lyrics don't speak directly, as other colleagues who talk directly about the protests and the police, I didn't. I always speak from my personal experience, from the romantic love seen from the point of view of a feminist, lesbian woman of the 21st century. So everything goes through me.

These songs are full of enthusiasm and full of fire because they were created there, in the middle of a social crisis. There is a song called "Diva", that talks about the night of the social protests. We were saying, you really have to enjoy going out, to come to this club tonight. Right downtown, where there was tear gas, police. So getting there was really dangerous. I don't know, a little of that, whatever surrounds a social protest. They are not 100% political songs, but it was like that energy in the air.

Also, there are different ways of dealing with conflict. Conflict does not always have to be approached from trauma or pain. There is something that has been noticed in the political and social movements. I'm thinking of Chile or Colombia and the context of the pandemic, where people need to see a halo of light. They need to regain that sense of happiness, of enthusiasm, right?

As I was saying, Javiera Mena has been a fundamental piece for an ENTIRE generation. This is not just my opinion, in a recent international survey published by the Chilean feminist multiplatform Ruidosa, and the Argentine feminist media outlet LATFEM, "Las Músicas de Tu Corazón" (The Artists of your Heart), Javiera was picked as one of the most important Latin American artists and songwriters. This trans-Andean alliance compiled the testimony of 50 music journalists, producers, managers, and musicians from Latin America and the Caribbean (of which I am proudly a part) to find out which albums produced by women, lesbians, trans or non-binary people changed our lives. The results, in addition to being historic, illustrate a very interesting sound map, leaving Javiera’s debut album, Esquemas Juveniles, in third place after the Colombian Shakira (¿Dónde están los ladrones?, 1998) and the Mexican Natalia Lafourcade (Hasta la raíz, 2015).

"I did not expect to be alongside the names of such icons. My mom and many friends called me. My mom told me, you won an award! And I explained to her that no, it's not a prize it's a recognition. The truth is it's really nice, it was also news that echoed widely", Javiera tells us and adds, "this album is so important to me because I did it without any kind of momentum, and today I feel like it is one of my moments. I feel like it was an album that aged very well and one I learn from every day." 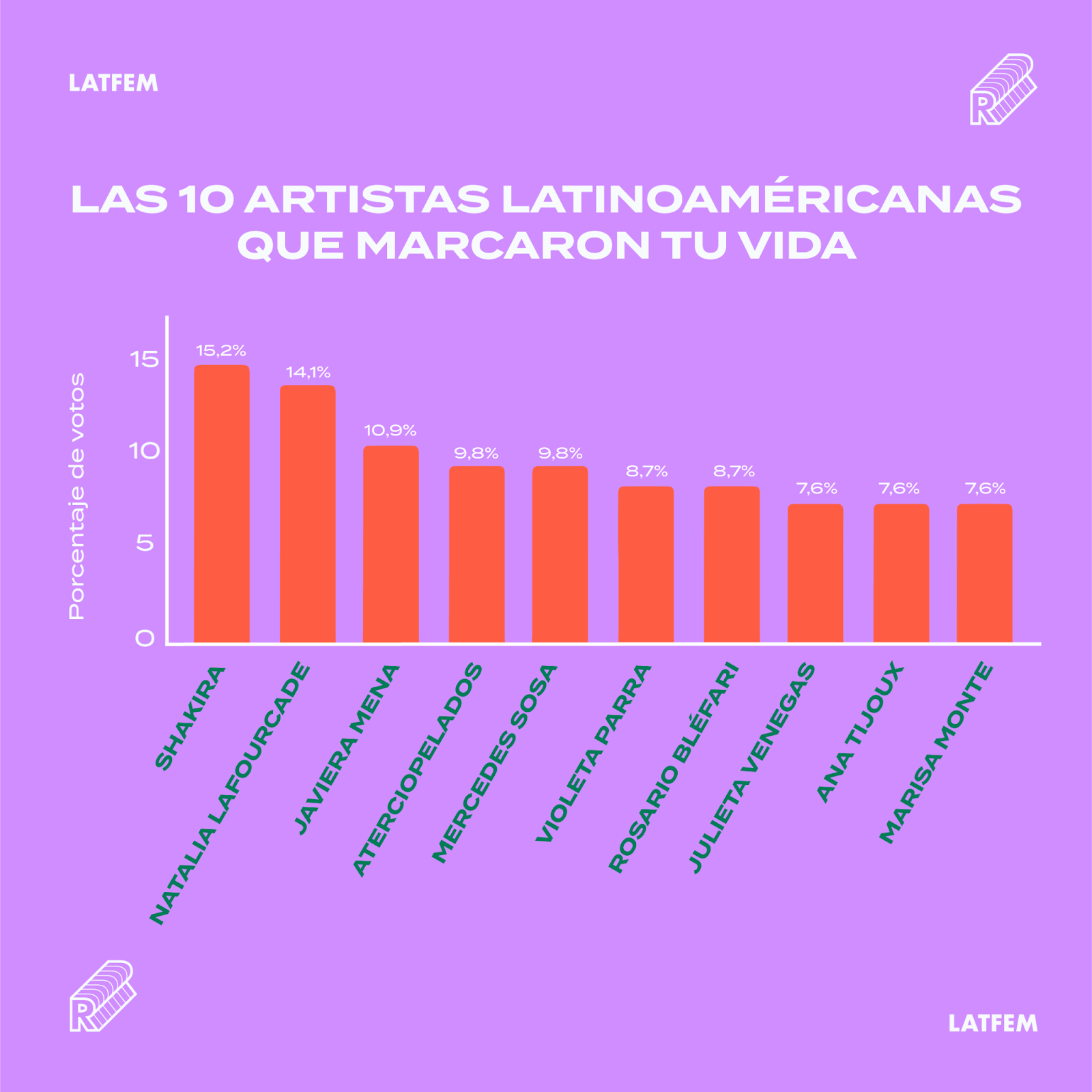 Perhaps this piece should have been written from the release of Javiera Mena's new album, but the truth is that it is always a good time to explore her career and her musical present. Javiera is an artist who some will say, "Ni de Aqui ni de allá," but deep down, Javiera is from everywhere.

Javiera Mena participated in our virtual event for the 10th anniversary of El Sonido, performing an exclusive version of "Corazón Astral," available on our Youtube channel. In addition, Javiera also recorded a session in our studios that you can watch again here: