Give Violence a Chance: Five Years of G.L.O.S.S.'s Trans Day of Revenge 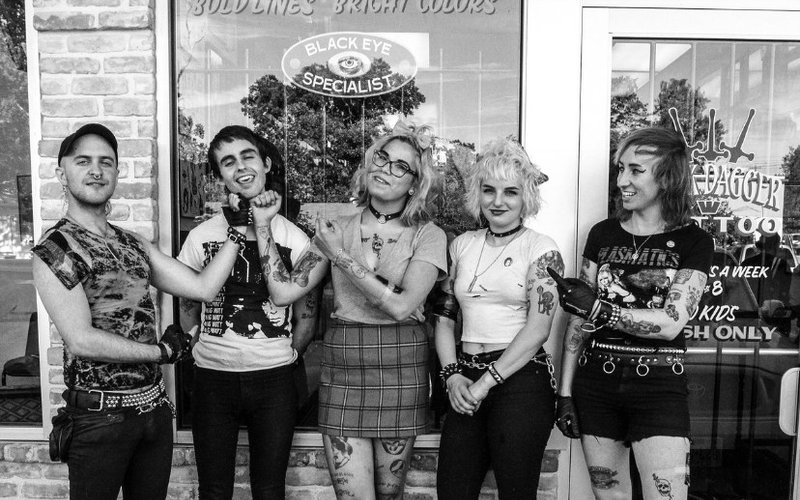 With Rewind, KEXP digs out beloved albums, giving them another look on the anniversary of its release. Five years ago yesterday, Olympia punk band G.L.O.S.S. released their epochal EP Trans Day of Revenge. A small handful of months later, the band broke up, citing the strain in their personal lives from their increased visibility. Martin Douglas tells the story of the band's rise, the themes of their work, and their abrupt end.

To properly tell this story, it might be a better idea to start from the end.

In September 2016, not even four months after the release of Trans Day of Revenge—as culturally significant a punk album as there has been in the past decade—G.L.O.S.S. broke up. Citing the overwhelm, stress, and pressures of being a widely popular band, the quintet (an acronym for Girls Living Outside Society's Shit) drafted a statement published by punk bible Maximum Rock 'n Roll saying the aforementioned elements welled up a great strain in some of its members. And let's not shit ourselves; they were an incredibly popular band for their station in the world of music—as a staunchly DIY punk outfit putting out their music on a network of small labels. A friend of mine once joked that their signature Divine-emblazoned t-shirt was the new Swans tee (you know, the one with the teeth).

"We're not all high-functioning people," said the statement. "And operating at this level of visibility often feels like too much [...] There is constant stress, and traveling all the time is damaging our home lives, keeping us from personal growth and active involvement in our communities."

Punk ethos and grassroots activism has walked hand-in-hand since—well, pretty much parallel to punk bands realizing the style and aesthetic could net them some money. Very shortly after the release of Trans Day of Revenge, the band was offered a deal by Epitaph Records with an advance in the ballpark of $50,000, which the band considered as a way to donate some of the money to organizations helping people of all genders, races, and abilities. Ultimately, the band decided against the contract, given Epitaph's major label distribution deal. The entire lifespan of G.L.O.S.S. was rooted in the spirit of punk rather than simply its aesthetic, part and parcel to their meteoric rise. (Alternately, post-breakup, all sales from G.L.O.S.S.'s Bandcamp page will be donated to Interfaith Works Emergency Overnight Shelter.)

The foundation of G.L.O.S.S. was poured in Boston—well-known in punk circles for its hardcore scene—where frontwoman Sadie and guitarist Jake attended shows together, the former a closeted transgender teenager in a scene, like pretty much every area of American rock music, dominated by cis-gendered, heterosexual white men. "I spent most of those years in the back of the room," Sadie told Bitch Media in 2015, "but I was always watching, always feeling."

Eventually Jake and Sadie would make their way to Olympia, Washington State's capital city of warring ideologies. In the town of artists, activists, hippies, punks, and weirdos vs. its heavy conservative contingent, Sadie was looking to build a healthier existence emotionally but was eventually inspired to start a hardcore band with Jake and a murderer's row of local punks—Tannrr on guitar, Julaya on bass, and Corey on drums.

G.L.O.S.S. would in turn record and release a demo in early 2015. Packed tightly into five songs, the eight-minute EP was like throwing an M-80 into a glass house with its powerful songs of rejecting validation from the straight boy canon and trendy mutant skinheads; decrying the performance of masculinity; crafting incendiary anthems for transfemmes, genderfluid folks, and outcasts tired of standing in the back of the venue. Spiked baseball bats beating down the structures of repression and the closets the straight white establishment force trans and nonbinary people into. Trans people being the targets of straight male bigotry and oppression. Supported by pummelling instrumentation and Sadie's barbed wire-shredded screams, the G.L.O.S.S. demo was a homicidal rebuke of transphobia and all its disgusting subideals.

It's funny how our oppressors have commodified and co-opted the language of history's great activist supporters of non-violent protest, men like Mahatma Gandhi and Dr. Martin Luther King Jr. The actions of such people in positions of immense power—mostly white, pretty much entirely cisgender—has inspired a culture of polite, non-threatening passivism among marginalized people under threat of violence, injury, death, evisceration. This mentality of terror has made its way to the regular-ass people who engage in daily harassment and the projection of hatred; you wanna talk about a trickle-down effect?

So often we as marginalized and oppressed people are talked out of fighting fire with fire, out of giving these bigot assholes what they deserve. Do I have the temerity to condone actionable violence on these people? By virtue of working for a pretty viable non-profit media organization, let's just say I don't.

But is there a section of my psyche that craves watching the "old world" burn; sizzling in the juices of their own hateful blood, crumbling under the structures of bigotry held up for centuries? Somewhere in my heart is a man who chooses violence, and that violence is specifically reserved for anyone who uses their privilege to maliciously further their own agenda at the expense of any person coming from a group that has been already marginalized for centuries.

Trans Day of Revenge opens with a banger titled "Give Violence a Chance," striking back against the militaristic forces of white supremacy. The EP's opening couplet contains the revolutionary spirit bellowed from the gallows: "WHEN PEACE IS JUST ANOTHER WORD FOR DEATH / IT'S OUR TURN TO GIVE VIOLENCE A CHANCE!" Sometimes quoting lyrics in all caps is just a nifty way to emphasize the message; here it's a direct translation.

Where Demo was a specific rendering of the transgender experience—the frustration, the isolation, the danger, and the dire need for violent retribution—Trans Day of Revenge occupies an array of activist and antifascist concerns. Though G.L.O.S.S. is fundamentally a band conceived by and for queer and trans people, their final work as a band speaks loudly to the physically and sexually abused, the racially oppressed, the people most downtrodden by American society's desire for a monolithic culture. The survivors living with heavy trauma, those showing up to school or work with bruises. The transgender people thrown under the bus by "yuppie gays." Sadie's vocals are clear in front and the instruments are there to support the message, where oftentimes the reverse is what's practiced. Hardcore punk is essentially a sprint to the last punch, and the seven minutes of Trans Day of Revenge is no different; its heart rate spikes to obscene tempos. It's punchy, but the kind of punchy you get when your fists are taped and covered with glass shards.

As a cis-gendered man, I think a lot about taking up space in a place that isn't meant for me. I think about being an admirer of G.L.O.S.S. and what they stood for, even though Sadie has mentioned in multiple interviews about being sort of confused by the acclaim the band has gotten from cis people. Is this a matter of barging into someone else's safe space? Conversations like this probably played into the decision G.L.O.S.S. made to discontinue recording music. From the group's breakup statement: "Being in the mainstream media, where total strangers have a say in something we've created for other queer people, is exhausting." I immediately think of the commentary brought forth in the piece "G.L.O.S.S., Hardcore, and the Righteous White Voice." I think of the intersecting discourse of when it is and when it isn't appropriate to speak to an experience you haven't lived.

Ultimately, I feel music is the great uniter in an increasingly fractured world. I am implicitly aware of the fact that Trans Day of Revenge isn't for me, and there might be some sort of line I'm crossing by singing its praises anyway. But that doesn't overshadow the importance of this work of art; it doesn't delude its relevance or detract from the notion of how important it is to be armed when the fascists kick down your door. Trans Day of Revenge, whether you can directly relate or not, is about the importance of fighting back, and I think there's something every well-intentioned person reading this can take away from it. In a world where principles are co-opted into a corporate cash-grab, G.L.O.S.S. stick to their guns and will brandish them until the revolution comes. 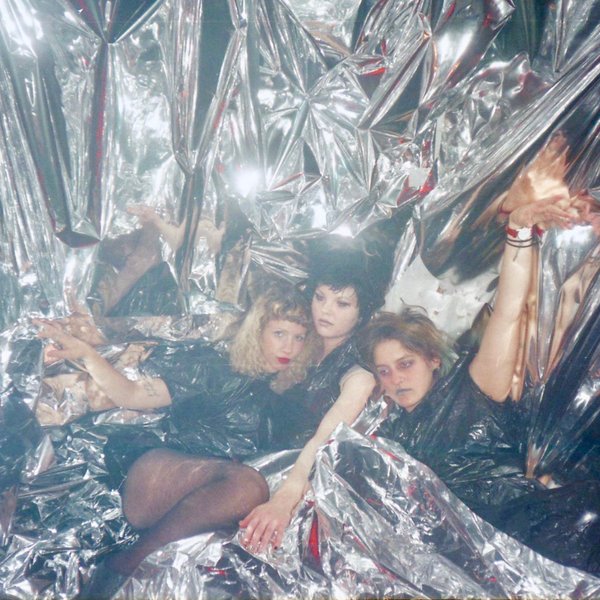 Martin Douglas explores the work of the fun and outspoken Portland trio. 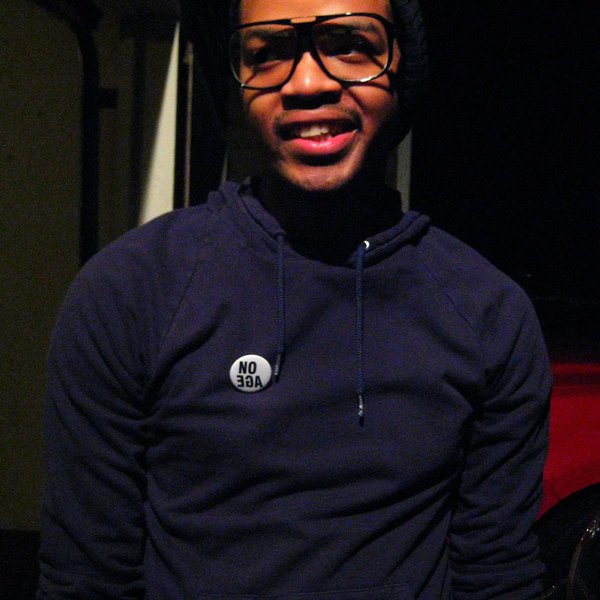 Requiem for a Fake Punk