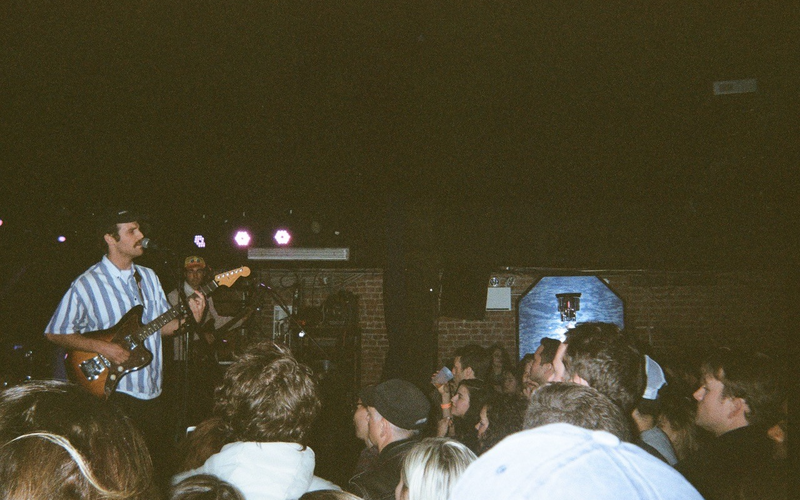 A lot’s changed since the last (and first) edition of Reminiscing the Road was released a little over a month ago. With 29.5% of the US fully vaccinated and half of American adults have received their first Covid shot, the tone around live music is less somber or nostalgic and more hopeful and anticipatory.

So hopeful that, in the past month, artists left and right have optimistically, if not tentatively, announced tours for Fall 2021. Everyone from Soccer Mommy, Osees, Faye Webster, Waxahatchee, Lucy Dacus, Japanese Breakfast, Julien Baker, and more have set their sights on playing music for real, live, in-person (but likely much smaller) audiences in less than 6 months from now. And, unlike all the 2020 tours the got pushed from spring to fall to just full-on canceled, it feels like these ones might actually happen.

In the meantime, there’s still a massive void in our live music-loving hearts that needs filling. Let artists Jack Symes, Kinlaw, Pardoner, Blood Lemon, and Fauvely take you back in time, to moments where social distancing, masks, and endless amounts of hand sanitizer had no place in our lives. When hugging a stranger wasn’t a complicated, almost political, choice. When being packed into a sweaty, sticky venue to listen to music was considered fellowship rather than parasitic. Let's not dwell but just simply reminisce. 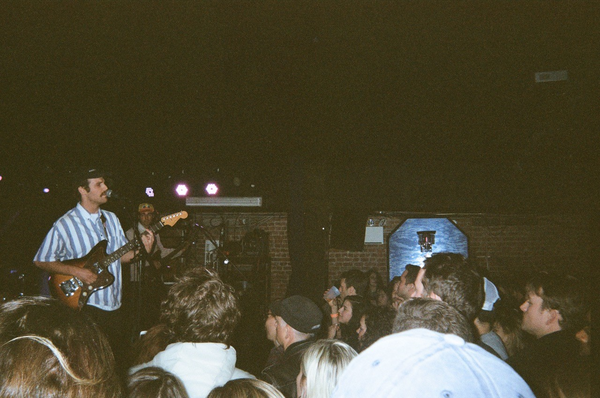 The last tour the band and I went on was through the northeast US in January 2020. It was a short 5 stop run co-headlining with Eva B. Ross in New York, Philly, DC, Providence and Boston. Our first tour doing just the bass, drums, guitar trio on tour, my bassist Greg, my drummer Keenan and I packed all our gear into and lived out of a Honda HR-V for about a week. Keenan and Greg had flown out from LA for this run, and apparently they’d thought we’d be crashing in the car for the week. In the northeast in January. Luckily, that wasn’t the case, staying with different friends, parents of friends, and one king-size bed for the three of us in Providence.

The last night of the tour was in Boston, playing at the Middle East in Cambridge. We played our set, had a wonderful time capping the tour before heading home to New York. It was a Monday night, but Greg, Keenan, and I wanted to celebrate the last night of the tour so we looked up the nearest pub to the venue. On our way to the bar, Keenan and Greg were revving each other up talking about their disdain towards Aerosmith (I personally am very into a handful of Aerosmith songs..). By the time we got to the bar, it felt like they were shouting about how Aerosmith is the worst band in music history, here on Earth and beyond. They kept on this as we got a round of beers and played pool in this giant empty billiards bar, until maybe 10 minutes into us being there when the bouncer, a very hard looking and needless to say Boston born n bred guy, yelled at them “you know Aerosmith’s from Boston right?” I’m pretty sure Keenan and Greg just apologized then we played pool in silence for the next 5 minutes. I offered to buy this bouncer some cigarettes as a peace treaty, he declined the offer but smiled. :) 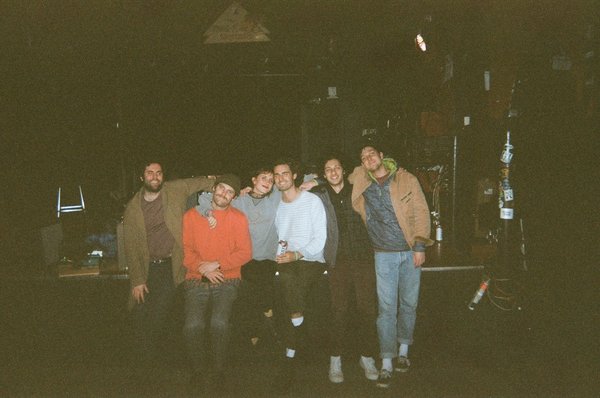 First photo is of our show at Mercury Lounge in NY

Jack Symes' sophomore album Tompkins Park was released in March. Watch the video for early single "I Need To Be Alone" below. 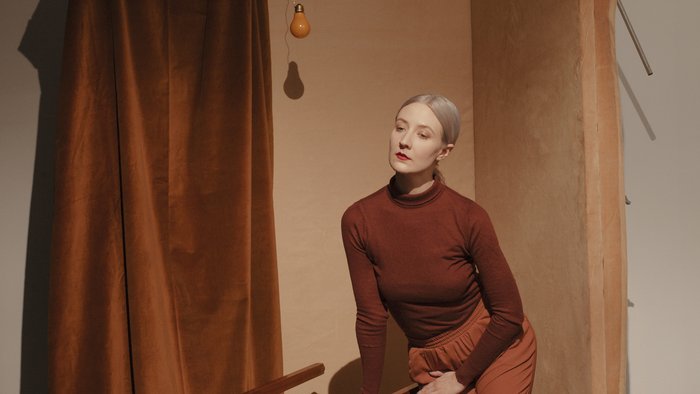 In 2017, I was lucky enough to tour with two people who are still best friends of mine today, in addition to extraordinary artists of their own. Kathleen Dycaico and Quenton Stuckey are dancers, vocalists, directors, and artists with abundantly creative and elastic ways of considering space for performance. I had written a collection of songs as a tape release and decided to build out choreography and performance to tour the music, and when they agreed to come along, I knew it was going to be incredible.

We would reformat the performance per each room on tour. That was part of the fun. This tour diary collage is from our show in Norfolk, Virginia. All clips are POV footage sent to me from people in the audience.

Quenton Stuckey recently released his first record under An Only Child called Prepare The Body, and Kathleen Dycaico directed both “Permissions” and “Blindspot” for my upcoming record, The Tipping Scale. 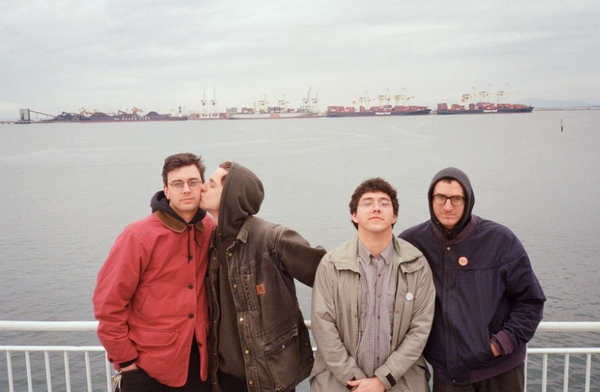 We are maybe a little tired, at least one of us is suffering from terrible indigestion. But the ferry ride from Tsawwassen BC to Victoria BC is a necessary step in a deranged rocker's quest, because it's beautiful. We must have stood out on that poopdeck taking photos for over an hour. It was very cold, but we did it anyway. 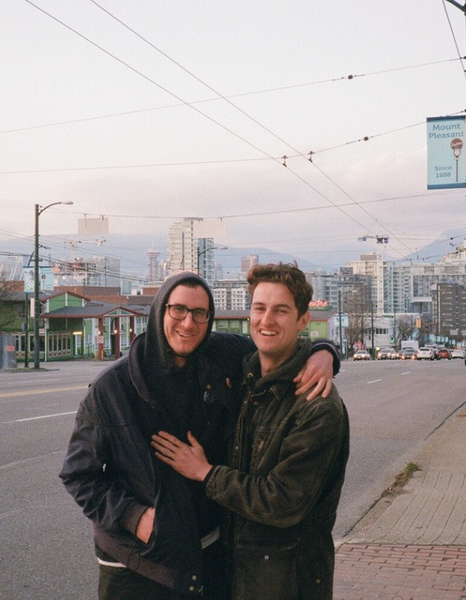 We went our separate ways this whole day. I was using the time to hang out with my then-girlfriend, who lives in Vancouver, where I now live, as her now-husband. Anyhoo, this is taken outside of that funny donut store on Main with the free wireless internet, just up from Red Gate. I remember getting a slice of pizza at Ignite and it doing something absolutely unmentionable to my stomach. We played with Necking, Dumb, and Cave Girl (RIP) if I'm not mistaken. 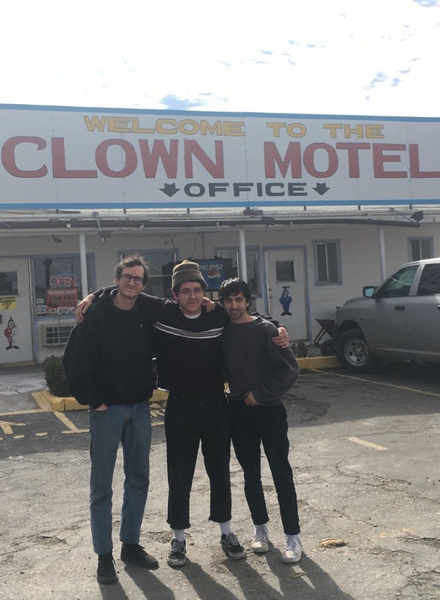 A mecca in a lawless land, an oasis for wayward drifters in need of a good laugh and some cold libations. I'm told it's the graduates from the local clown college, starting their own motel first, and slowly developing a thriving clown city surrounding it. Either way, before we turned in for the night, we made our way to the theater room for the night's entertainment. A tall, lanky clown squirted delicious juice out of the flower on his lapel all over Franco and I. There was a graveyard adjacent to the motel, but we could not determine whether it was a clown graveyard or just a normal one. Vegas was the next stop. It was gonna be a long night. 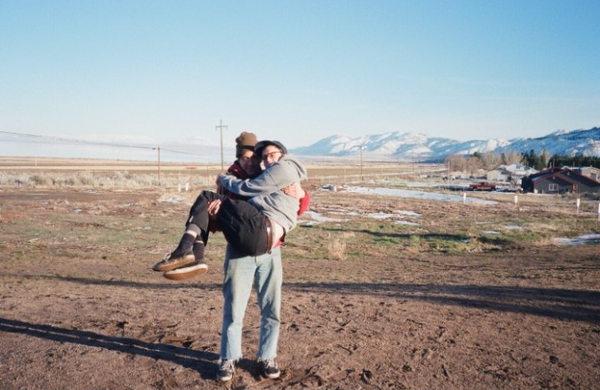 River's feet were killing him. Hell, mine were too. 1000 miles walking from Mesa AZ to Austin TX, and it was hot, hot, hotter than hell. The force I exerted to pick him up made my stomach twist and turn like a Tasmanian Devil. Everything went white, sublime. We were going to be late for our show at Voodoo Doughnuts. 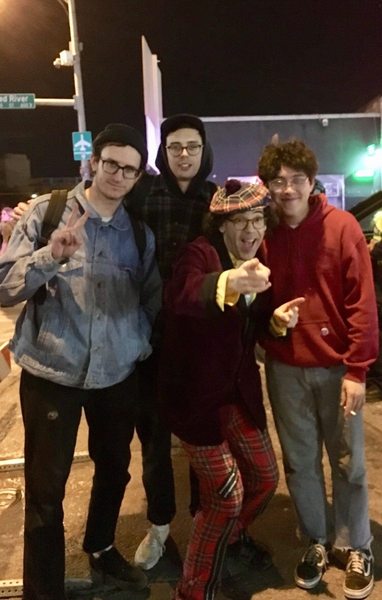 Austin at night. Roaming the streets like dogs, in search of a new bone to chew. The scene was bleak. Regardless of day or time, everyone we run into asks us if we are going to see Omni at the Barracuda. Their eyes are haunted with misery. In the distance, we spot a familiar hat sitting atop a familiar face. The Nard Man. For a moment, it's all worth it.

Pardoner just released "Donna Said" off their new album Came Down Different, out May 12th, 2021 via Bar/None Records. Watch the video below. 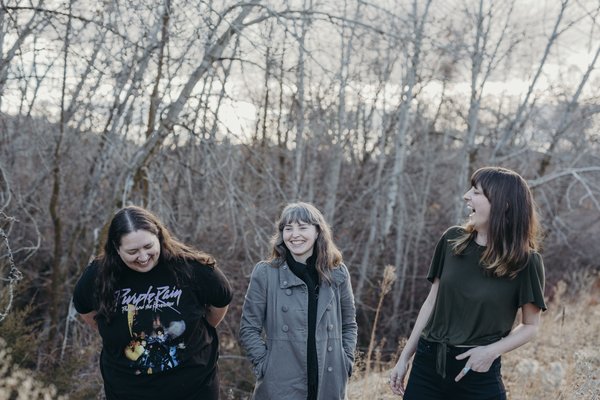 There really is nothing like playing music for other people. It’s a symbiosis of energy between the band and the audience. It is a practice in presence and mindfulness. There’s no rewinding the track, no skipping over to the song you like best. There’s anticipation and discovery. There’s nothing like seeing live music. 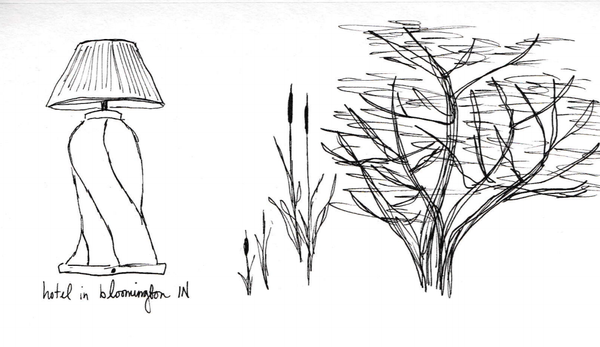 Hotel in Bloomington, IN 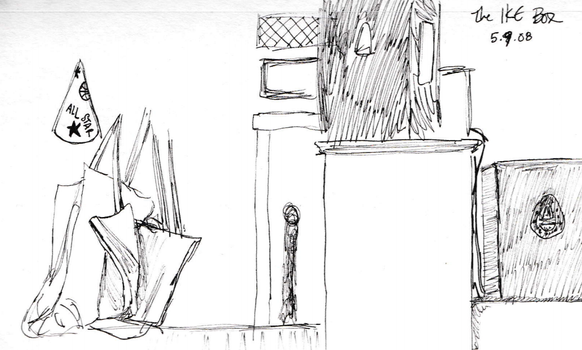 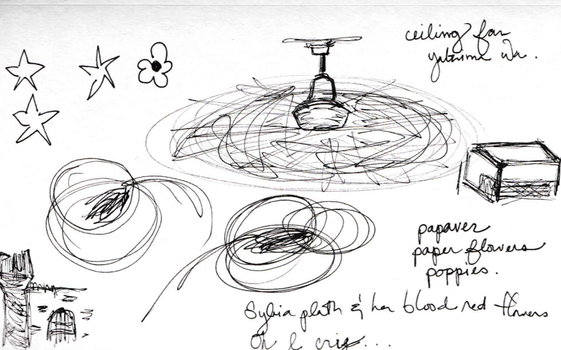 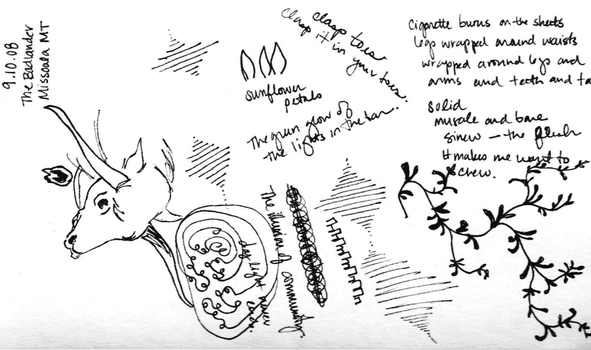 9.10.08
The Badlander
Missoula MT
Clasp toes
Clasp it in your toes
Sunflower petals
The green glow of
The lights in the bar
The illusion of community
Daylight never ends
Cigarette burns on the sheets
Legs wrapped around waists
Wrapped around legs and
Arms and teeth and teeth
Solid
Music and bone
Sinew – the flesh
It makes me want to
Chew These entries are from a journal I had with me on a very brief tour for the release of This is What the Living Do in April 2019. This particular entry feels pretty embarrassing, to be honest, but there’s one line that sticks out to me: “The other night, Andrew said, ‘Am I failing or am I succeeding?’” This is an idea I think about a lot. It’s kind of like the way we’ll never really know what we look like in a mirror or from a photograph. Our brain fills in the gaps. We view our successes and failures through the fantasized perception of others. This is the beginning of "Always," which we just released earlier this month. It started with two chords and the line, “There’s always a reason to be sad.” Later at home, I went back and wrote in the start of what would become the chorus. A song can often change quite a bit from conception to finished product. The earliest stage of writing is very special to me. Magic! Here I am talking about writing again. I referred to it as “a tool to better understand our place in the world.” I like this sentiment because I think the best art doesn’t provide answers, it asks questions. I sketched this deer in the back of the van on the way to Athens, GA (I think). I am very sorry to say that I got the top one tattooed on my arm two days later in Nashville. The whole band got different deer tattoos. The deer is the Fauvely spirit animal. They are wild, yet demure, and everyone is happy to see them. 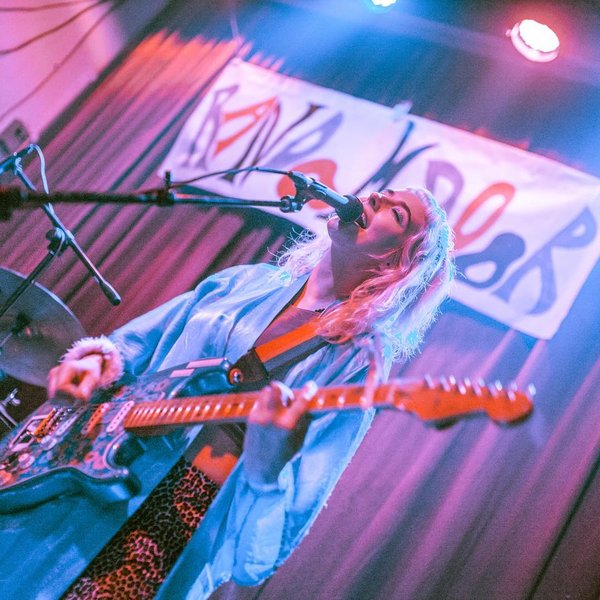 After a year of missing live shows, KEXP has asked artists to share their personal journals, sketches, photos, and memories from being on tour 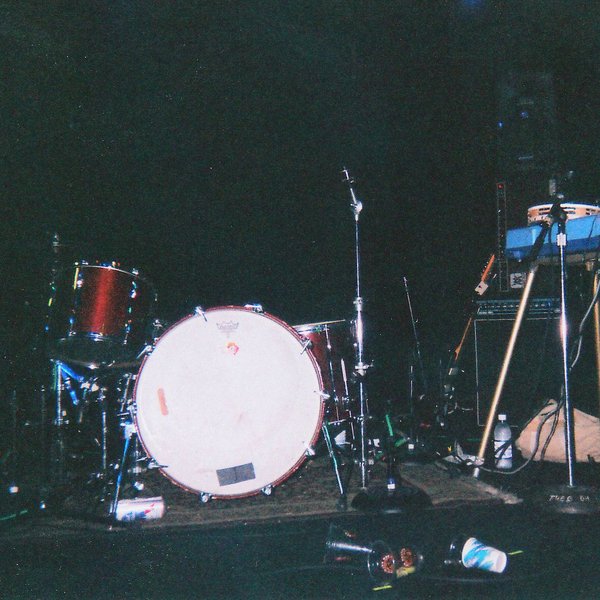 Martin Douglas chronicles nearly half a lifetime of live music healing the wounds of life. 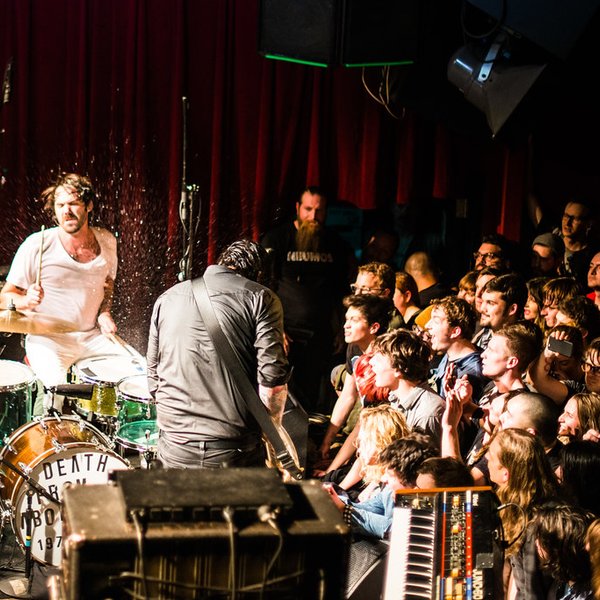 Other People’s Sweat and Beer Soaked Shoes: What I Really Miss About Live Music

For Live Music Heals, KEXP's Dusty Henry reflects on the little moments of concerts that end up mattering the most.