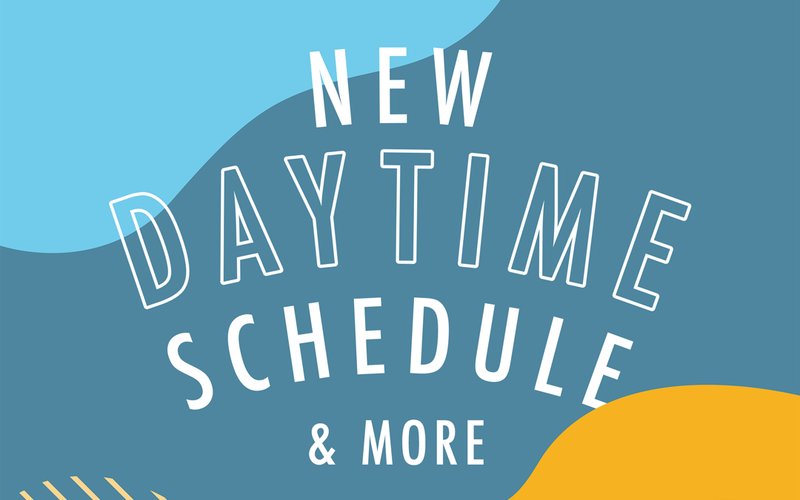 Also announced are changes to KEXP’s creative and content teams, including the addition of two new full-time leadership positions in music curation and editorial direction, and the expansion of several production roles. These changes will serve as an initial public step in advancing KEXP’s commitment to becoming an anti-racist organization, and are aimed at making the station’s music programming stronger overall.

Programming changes go into effect beginning at 12 AM (Pacific) on July 27th, and include:

See the full schedule below, click to open a larger version in a new tab. View a text-only version of the schedule here. 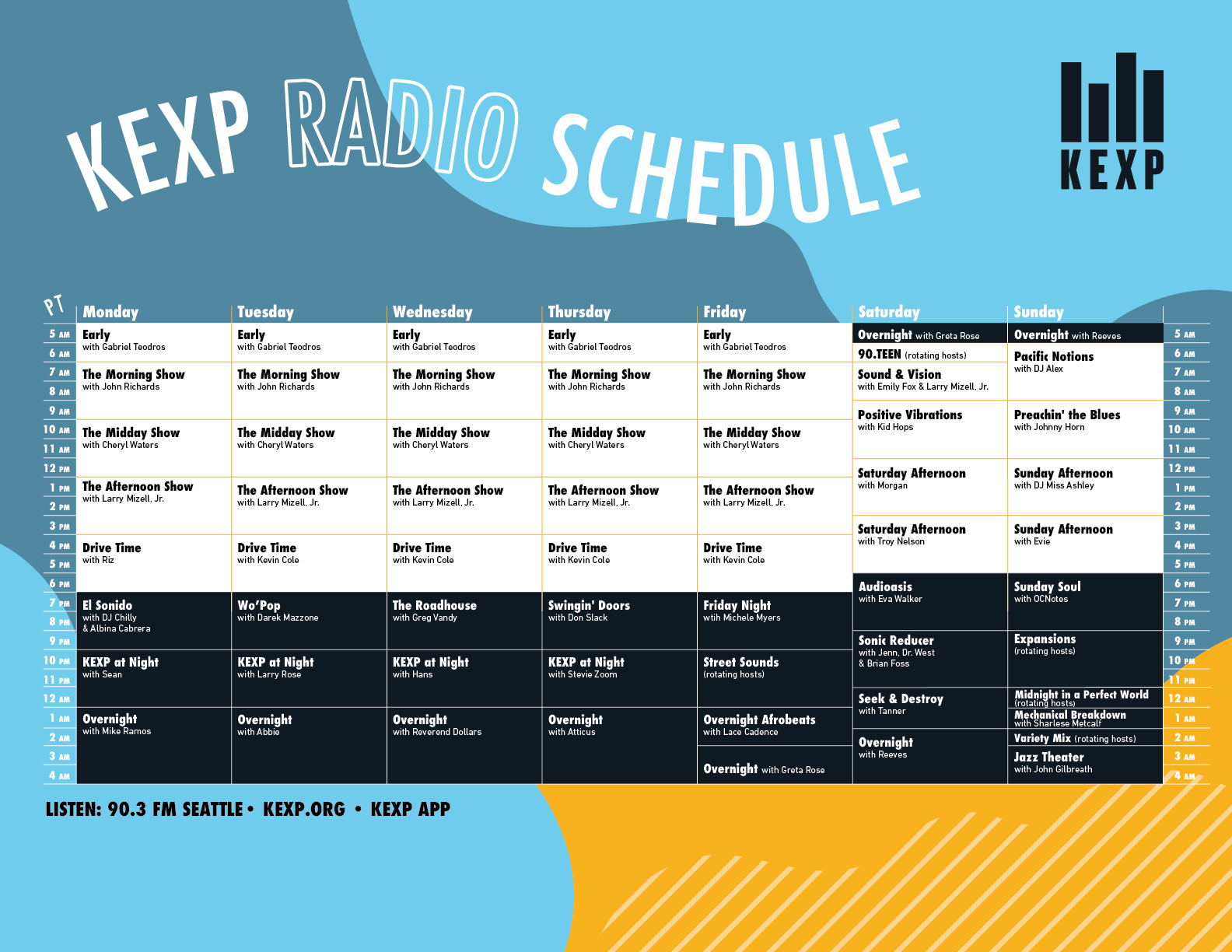 “Music is sacred,” said Larry Mizell, Jr., incoming host of the Afternoon Show, which moves to weekdays, 1 to 4 PM Pacific Monday through Friday. “There’s nothing more exciting to me than sharing music, and I’m beyond excited to get to do that all week with our listeners. Some may know me chiefly from doing Street Sounds—but doing a variety mix, with all the palettes and possibilities for fun and exploration, has always been my favorite kind of challenge.”

Along with new daily radio hosting duties, Larry Mizell, Jr. will be elevated to Director of Editorial, a new role that will guide online and social content and organization-wide editorial content strategy. Mizell will also replace John Richards as co-host on Sound & Vision, KEXP’s arts and public affairs podcast and weekly radio program and podcast, and serve as a member of station leadership on KEXP’s Executive Team.

“I’m so honored to be taking on this new role at KEXP, to have a hand in the stories we tell,” said Mizell of his role as Director of Editorial. “I’m proud to help write the next chapter, as part of this worldwide community, bound together by vibration, love and curiosity.”

"With five mornings a week I'm excited about all the special programming I never had time to do on the overnight show,” said Gabriel Teodros, who will host Early on KEXP weekdays 5 to 7 AM Pacific, Monday through Friday. “I'm excited about having recurring themes focused on voices we don't hear enough from. Spotlighting different artists, and regions, and using music to respond in real-time to what's going on in the world. Always bringing it back to connection, healing, and lifting up voices of the underheard. It's that morning coffee.”

Teodros will also join the station full-time as Associate Music Director, where he will bring his wide-ranging experience as an independent artist and DJ to further advance the curation of KEXP’s music catalogue and bring more music from under-invited communities to the forefront of KEXP’s programming.

“As Associate Music Director, I'm thinking of it first as a lot of outreach,” said Teodros. “There's so much amazing music that's never been in our regular rotation at KEXP, and with the amount of incoming mail that [KEXP Music Director] Don Yates receives, I know that it's impossible to keep up. One day I'd love to see a whole department of Music Directors who all had their specific focus, but for now I'm happy to step into the role and help the sound of KEXP grow to be more expansive and inclusive."

From John Richards, KEXP Director of Programming and host of The Morning Show, which will be reduced by one hour and now air 7 to 10 AM Pacific, Monday through Friday.:

"KEXP's mission must be to serve our whole community. These programming changes reflect a big step in that direction, and one I hope will lead to even more Black, Indigenous, People of Color (BIPOC) voices being centered on and off the air - not only at KEXP but also in other non-profits and media organizations in our city and beyond.

"The impact these hosts and creators will have in the lives of listeners will be incredible. These are some of the best DJs and curators I've ever heard, and their perspective and talent for bringing music into peoples' lives is truly unrivaled. With significant changes to our programming schedule and on our creative and content teams, KEXP and our community will only be stronger, more resilient, and more welcoming."

Each of KEXP’s current weekday daytime shows will be reduced by one hour to accommodate the new schedule. The Morning Show will move to 7 to 10 AM, the Midday Show with Cheryl Waters moves to 10 AM to 1 PM, and Kevin Cole will move to 4 to 7 PM in a new slot called Drive Time.

Albina Cabrera, a radio host, content producer, and music publicist from Argentina, will become a permanent co-host of El Sonido, KEXP’s weekly modern Latin music program, beginning in the fall. In addition, she will take a full-time role leading strategy and content development for cross-platform Spanish-language and bilingual content and coverage of Ibero-American music as Latin American Content Producer. In this role, Cabrera will help guide the organization’s engagement with an expansive and rapidly growing Spanish-speaking audience.

KEXP will also be adding a new show focused on Afrobeats, hosted by Seattle DJ and musician Lace Cadence. In addition, veteran KEXP DJ Riz Rollins will move from Monday late-night to Drive Time, 4 to 7 PM Pacific. Reverend Dollars (AKA Renee Jarreau) will join KEXP as Overnight host, late Wednesday/early Thursday 1 to 5 AM.

A statement from Sharlese Metcalf, host of Mechanical Breakdown:

“I'm excited to share some music with KEXP listeners that I have enjoyed and collected for years. The show is named after one of my favorite bands - Crash Course in Science - who made some legendary minimal synth and post punk hits. Mechanical Breakdown will be a weekly hour of the many different styles under the dark umbrella of coldwave and dark wave, minimal synth, new beat, italo, post-punk, EBM and so much more; songs that I love from the past and the present to give your ears an opportunity to explore all of the goth, cold, and synthy music being made all around the world.”

"DJ Chilly [current host of El Sonido] has built strong and valuable bridges with the entire music scene of our continent and I hope I can add a few more bricks with the addition of my voice," "My goal is to extend these paths towards the music of my community while expressing the identities, realities, and voices of a new generation - but without forgetting the traditional icons.

"Having the opportunity to be the first Latina called to occupy the role of KEXP's Latin American Content Producer is an indescribable joy, but much stronger is the social and political responsibility I feel for the music I grew up with. KEXP has a deep relationship with Latin America and Spain, quantitatively and qualitatively, which is why today it is essential to reach out to new audiences with the respect and responsibility they deserve. The influences of my culture, the stories behind an unforgettable song, the physical and mental distances, the walls and the tons of injustices unleashed on our community, are some of the engines that will allow me to approach this position equipped with the best weapon: the music and voices of Iberoamerica."

A statement from Lace Cadence, host of the new weekly program Overnight Afrobeats, which will begin air late Friday/early Saturday following Street Sounds at 1 to 3 AM Pacific.

“My main goal with the new show is the exposure to Afrobeats and current African culture. I’m always surprised at the general lack of knowledge on current African pop music and culture and its discredited power and influence. So through this show I hope to help change that, and give some good opportunities for DJ’s and artists - especially female DJs and artists - to be heard on a platform like KEXP!”

The suite of announced programming and staffing changes at KEXP follow a statement released in early June, in which the organization affirmed a commitment to racial equity and the pursuit of anti-racist action, but stopped short of describing what that action would be. Throughout the past several years, staff and community at KEXP have been engaged in many conversations about racial and gender equity. However, the organization acknowledged that this work has not been sufficient, and that the privilege held by KEXP should be examined and its contributions to patterns of injustice should be actively undone.

Over the past several weeks, the movement for justice, humanity, and dignity for Black lives has spurred many of KEXP’s programming staff and DJs to re-imagine what equity can look like within the station’s programming. The organization’s leadership feels that these are steps in the right direction, and is inviting ongoing feedback from community members moving forward. Visioning, discussion, and work on additional steps is underway, and the community can expect more movement on actions KEXP is taking toward its commitment to racial equity.

“I am overjoyed and grateful for Larry, Gabriel, Lace, Sharlese, Albina, and Reverend Dollars for joining this new radio lineup, and for assuming new positions of leadership in the creation of music content at KEXP. I also feel compelled to acknowledge that there is much more for us to do. Back in June, when KEXP released our statement on becoming an anti-racist organization, we were challenged - by ourselves and by many listeners and community members - to turn those words into action.

"This work has also been pushed forward by the evolution of conversations at KEXP that have been taking place for years, led by staff members across the organization. These changes to programming and staffing at KEXP represent only a first step toward future action, and I’m expecting us to do much more work in this area.

"Representation matters, particularly on-air, because the role of the DJ at KEXP is powerful – it’s not just whose name is on the schedule, but also about bringing one's full self and humanity to the airwaves as well as one's music knowledge.”

All times Pacific, and all shows available on-demand for listening any time in the 2-week streaming archive at KEXP.ORG and the KEXP Apps

For further detail on the new radio schedule and KEXP’s pursuit of racial equity, please see a Frequently Asked Questions article on these programming and staffing changes.

All KEXP programs are available for listening any time in the two-week streaming archive, available at KEXP.ORG and via the KEXP mobile apps. Listeners and community members are invited to provide feedback and ask questions at feedback@kexp.org. 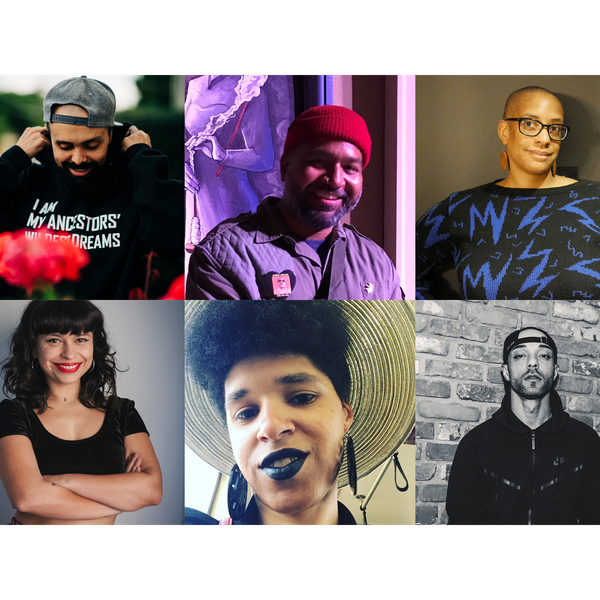 Learn a bit about the DJs who will be moving into new on-air slots, including Larry Mizell, Jr., Gabriel Teodros, Albina Cabrera, and more. 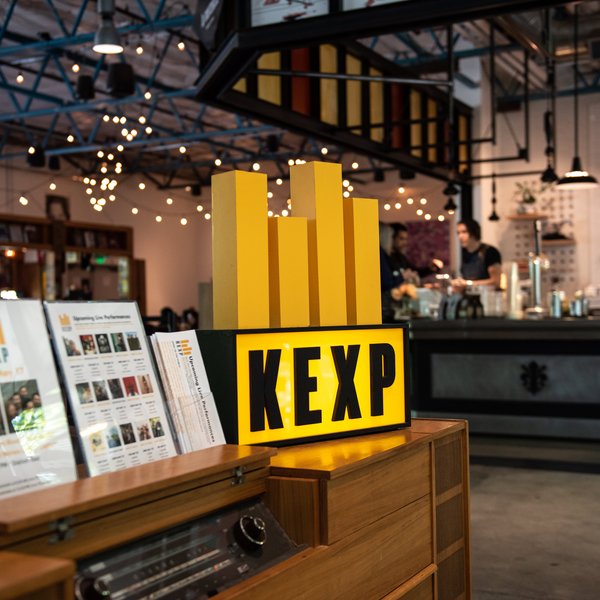 We’ve thought of a few questions you might have about the announced programming changes, and have tried to answer them as best we know how.