Sonic Reducer Turns 15: A Tribute to KEXP's Punk Show and the Standard Where it Gets its Name 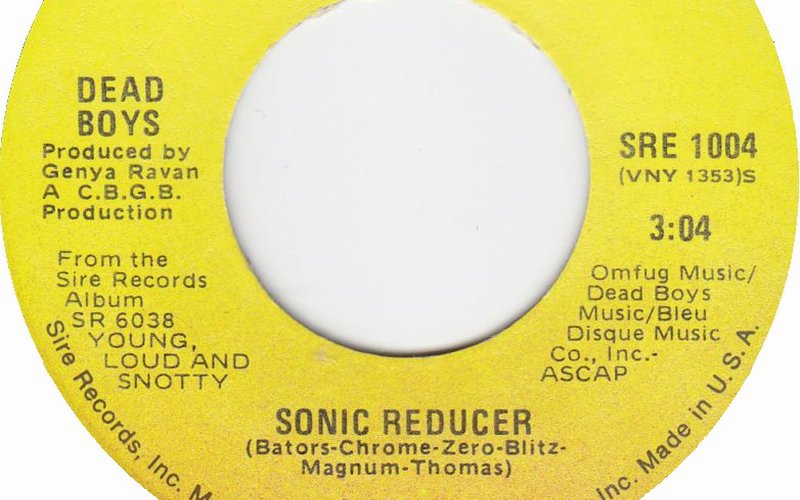 For the last fifteen years, co-creators Brian Foss and Dr. West of KEXP’s show Sonic Reducer have been raucously and lawlessly creating space all over the airwaves as a much-needed platform for local, national, and international punk/hardcore music. In celebration of their anniversary, it seemed apropo to re-visit the '70s punk standard “Sonic Reducer” – where the show got its name (pitched by Nick Turner, who was also a co-creator) – and highlight some of its history, covers from legends like Patti Smith and Pearl Jam, and samples from icons like the Beastie Boys.

The ten-foot tall, anti-authoritarian anthem “Sonic Reducer” is commonly attributed to Clevland, Ohio’s Dead Boys, but it’s not entirely accurate. Getting to the bottom of it, prior to The Dead Boys there were two bands of shared members: Rocket from the Tomb (RFTT) and Frankenstein. RFTT wrote “Sonic Reducer.” More specifically, since Gene O’Connor (aka Cheetah Chrome) was in the “classic” RFTT line-up, after they broke up he was able to kick the song into the short-lived, glam rock act Frankenstein and then into The Dead Boys, who popularized it via the opening track on their 1977 debut album Young Loud and Snotty. However, another original member of RFTT is David Thomas, who also has writing credits on the song and who also went on to form the iconic art-punk group Pere Ubu. Check out a side-by-side listen of RFTT and Dead Boys below.

The almost-four-minute rabble-rouser is like any song that you’ve played over and over and formed an intimate relationship with so well that hearing the first note gives you chills of joy. So when you hear the initial ring out of “Sonic Reducer” that then fires into an adrenaline-indusing, four-note riff, you know the attack of energy that’s coming and it’s infectious. It’s also this type of ferocious energy and bond that the Sonic Reducer show has been giving to listeners for the last fifteen years.

“Sonic Reducer” has been so infectious since it was recorded that it’s caught the ears of luminaries unable to resist covering it. Two of which were Pearl Jam and Mudhoney, who have been covering the song together since the '90s (see a live cover from ‘94 below) and mostly recently included Soundgarden members in their performance of it at their show last year at Safeco Field in Seattle. Since Mudhoney will be playing the Sonic Reducer 15th Anniversary Live Show it felt relevant to start this deluge of covers with this version.

The head-shredder that is “Sonic Reducer” has been such a force to reckon with in the punk community that Patti Smith performed a cool-and-screechy tribute to it for the emotionally historic closing night of CBGB – the birthplace of the punk.

Dr. West, one of KEXP’s Sonic Reducer DJs, pointed out one grainy-fav rendition of “Sonic Reducer” is The Vibrators featuring Wayne Kramer of MC5.

But it’s not only the punk community that has been influenced and exposed to the hynopytic hit. The Beastie Boys – who, of course, have punk roots – sampled the opening hook of “Sonic Reducer” throughout their song “An Open Letter to New York,” which came out fifteen years ago on their To the 5 Boroughs album. Bands like Pearl Jam had already been innoculating the riff into the masses, but the Beastie Boys brought to a whole new demographic of the masses.

While we’re still on samples, Yo La Tengo does a morphed mashup of it on their  “Shotgun + Medley” track on Murdering the Classics, which might fuction as the most experimental version in this set.

Even Guns N’ Roses got in on the “Sonic Reducer” action on a 2009 tour in Japan, where Tommy Stinson (of The Replacements) joined them on stage. Maybe the rock giants had seen/heard The Replacements cover it back in 1991. But you can watch their live take below.

The list goes on for how many illustrious and influencial musicians went on to cover this song. You’ve got metal bands like Overkill repping, Sweden’s Dozer repping for stoner rock, Italian punks The Valentines, Saves The Day repping for pop punk, English punks G.B.H., Adolescents, Joey Ramone, and Adrenaline O.D. (another shout out from Dr. West.). It’s a beautiful collage of countercultural comaraderie.

Punk rock and hardcore is in the ear of the beholder. It’s music that is often gets reduced to unruly sound with raucous edges, but if we cook down any type of music through a reduction process we see that it can create a thicker, more intense flavor when its simmered over time. A classic song is not confined to its genre and can give the masses what they want: a hook and a message, and in this case the message is “Sonic Reducer / Ain’t No Loser. ”