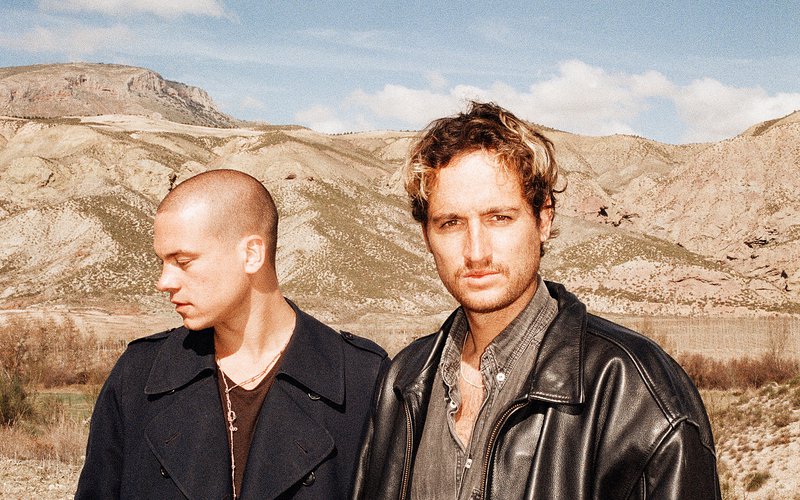 It's a message we all need to hear and/or say in these tough times: "I Am OK"

And it's the message of the new single from Lea Porcelain, premiering today at 8:15 AM on The Morning Show with John Richards. (Listen to it again below.)

Last we heard from the Berlin-based duo, producer Julien Bracht and multi-instrumentalist/vocalist Markus Nikolaus had caught our ear with their self-released 2017 debut Hymns To The Night. On today's premiere track, they return with elements we associate with them — ukelele, Nikolaus' gruff, moody vocals — but this time, the song takes an anthemic turn, swelling towards a dramatic chorus of "I am OK" and then building towards a passionate conclusion, with Nikolaus' shouts calling to mind early U2. The band tells us: "The song describes a time in everybody’s life that make you lose faith in yourself, in someone else, or in life itself and you just need to hear from someone that one day everything will be OK again. That no matter what, with time and patience we all will be OK.”

The guys were kind enough to share some history about the track and give us more information on the forthcoming full-length.

KEXP: What was the inspiration for the track? And what was the recording process like?

I kind of want to answer both questions in one here because we can hardly distinguish between the two.

This might also need a little explanation because firstly we toured the Hymns to the Night album in spring and after we went to Brazil to keep recording new material and calm down. By the time we came back to Berlin, we pretty much cut off everyone. Changed apartments and moved back together, isolated ourselves in the studio. Both simultaneously left the girlfriend. It was a moment that it really seemed like all we have is each other and this music we make with Lea Porcelain. We played around with anything we liked. Pushy drums, electronics, a lot more acoustic instruments than on the first album. Ukulele, Spanish guitars, self-made shakers, and combined this with what we learned on the first album.

The song was recorded after eight days of sleeping in the studio, while we were literally washing ourselves in the rivers by Funkhaus and ate only in the restaurant there, so we can go back quickly. On the eighth morning waking up there, slightly hungover and a little bit down from last night's idea that didn't work out, we met one of the owners and he said, we should rent a boat and chill because that is what they had done just this morning. So, we packed the ukulele and decided to go on a boat. On the way there, I played the ukulele and only hummed the chorus melody to it. Like it came from nowhere, we both turned to each other, recorded it with the phone and then went back, completely forgetting about the boat idea.

It just felt good to write something beautiful with no other purpose than to let this feeling out.

So, we sat down, simplest equipment: SM7 for the voice, plugged a bass in and used an Octaver Mic for the ukulele. Then we started and I fiddled some lyrics on top. The basic idea was that we were not giving a fuck if the song works or not. It just felt good to write something beautiful with no other purpose than to let this feeling out. We were in there so deeply and we felt almost like we were drowned by it. We made use of this situation. A bottle of warm wine from last night was our companion and the lyrics were floating from there on. At one point I had to wear sunglasses because I felt that tears were running down my cheek. It was one of the most freeing experiences of writing music because it felt so good to express all the hurt, the excitement, the fun, and the disappointments — that were felt all these months of touring, traveling and isolation. We did two takes and felt like we just came out of an out-of-body experience. We just needed someone to tell us: “It’s all ok. Life is still good. You are still here. Love exists. Take care of yourself and experience all this. Live who you are. There is no one else that can be you.” From that moment on, we knew in which direction we wanted the new songs and album to go to. And this song gave us the confidence and power to go that way without listening to anybody's opinion too much.

What more can you tell us about the new album?

After three very intense months in Spain, we did most of the mixing there, wrote five more album tracks, and so many more ideas. But the time in itself was the most fruitful because we knew after this isolated period in Berlin, we need to fully go to nature, out of civilization, social circles, and the party life in Berlin. So, we went to the house in Spain where Julien grew up through his teenage years and took all the studio, the touring equipment, every instrument we could bring with us and take the whole band. Invite musicians, producers, songwriters, photographers, video teams, and produce everything there in Andalusia in Spain. We finished the album in two months, did press pictures, shot a new music video, and exercised. Physically, musically, and spiritually. The album will contain 11 tracks from which all are already written and produced. In Berlin, we will mix it with this new engineer team we got — they’re amazing! — and from April on, we'll keep putting out singles every month, one track. The new direction is definitely more musical, more changes, less repetitive, and more acoustic. But of course, we kept writing some strong and electronic bangers because that's where we come from. All in all, to us, it is the perfect combination and it totally hits our taste in a broader spectrum. The release will be around late autumn of this year and we just signed up again with AWAL in the U.K.

“I Am OK” is the first single from their upcoming EP, set for release June 21st. Lea Porcelain embarks on a European tour this month. More dates will be announced in the future for the summer.