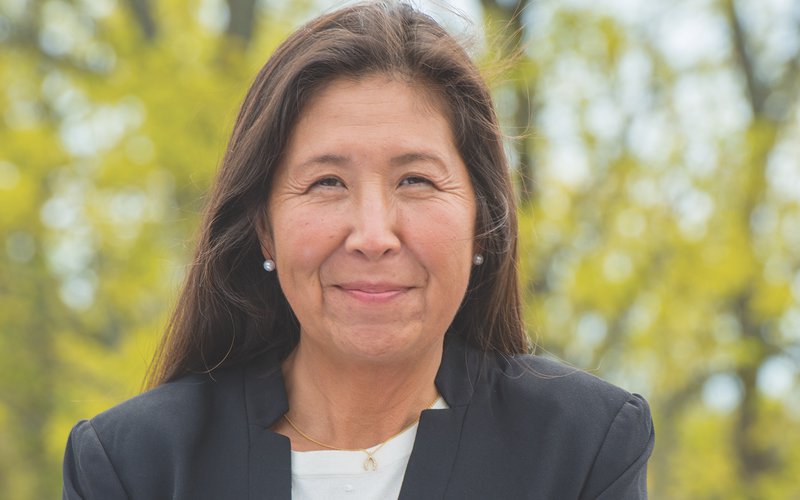 This Friday marks International Women's Day and all month on Sound & Vision we're going to get to know all six of the women of color that are new this year to Washington state's House of Representatives and Senate. In our most recent episode, we meet Debra Lekanoff. She represents the district that covers the San Juan Islands along with part of Skagit and Watkins counties. And she's the first female Native American to be in the state House of Representatives.

Listen to our interview and read the transcription below.

Debra Lekanoff: I'm part Tlingit, part Aleut. My Tlingit side is from a small community in Alaska called Yakutat which is "salmon people." My dad's side of my family is from the Pribilof Islands in the Aleutian chain which is "seal people." So my little cheesy joke is, "If I can bring the seals and the salmon together, just imagine what I can do in Washington state." So the great state of Alaska is who built me.

KEXP: I'm told we're seeing the most diverse incoming group of legislators in state history. What does it feel like?

It is incredibly powerful to be able to look at all the wonderful women who make up the floor in Washington state – 25 percent of the women make up the state legislature. It's been an extraordinary pathway to be seated with so many people of color in our state.

So what were you doing before you got involved here as a state representative?

So for 20 years I've served in governmental affairs, which I am a servant to my Native American communities. It's who I am. It's where I've come from. It's always understanding to give back to those who've given to me. So, working in the past 17 years for the Swinomish tribe, my sole goal, my sole job duties, my responsibility was, "How do we better bring our tribal communities together across Washington state, the Northwest, and across this nation on common grounds?" And then also, how do we do that same relationship building at the local, state, and federal level because at the end of the day we all call this place home then, now, and in the future.

What motivated you to run?

I was moved at this next juncture in my life to be able to take all of the ability of relationship building and bring it here to Washington state. As a mom, as a woman, I felt I had the leadership qualities and compassion to be able to work with power and strength at a table that brought decision makers together to address common grounds, common solutions, and to be able to make those generational decisions that are really long lasting for all governing bodies. Now, being an elected official, most see your decision as just a short two year term. I'd love to be able to say that at the end of my tenure I was able to bring my colleagues into this new way of thinking of generational decision making that goes beyond the decision and the dollar today, but what it's going to cost our future if we don't work together and how we can rise our future if we do work together.

I know a little bit about historical Native American decision making and this idea of seven generations where when you make a decision as a leader, you're thinking what's the best seven generations down the line. Is this kind of a part of that process for you?

It's actually always been a process. It's no other way of thinking for me. My hands are always full. You'll see me walk holding my future in one hand of the children's children yet to come as I make a decision. And that hand is behind me just a little bit and there's one hand in front of me that holds the teachings of my ancestors which have been transcended down through my bloodline to me. So, as a Native American, making seven generations of decision making, it becomes natural. But as a woman, as a generation maker, we as women can think of no other way than thinking of the children's children yet to come.

So you wore your grandmother's regalia when you were sworn in. Tell me what that meant to you.

When I first thought of having my Native American brothers and sisters from Washington State and First Nations in British Columbia come down to help honor this wonderful day of celebration with me, I thought there would just be a few close folks [who] would come down: chairs, chairmen, chiefs, my mom, and my daughter. By time the day came, we had such a beautiful gathering of First Nations coming south from British Columbia and our Western Washington tribes that when Nisqually hit the drum and they opened up the doors of the House chambers, it was the first time that the drums and the Coast Salish language had been sung on the floor of the House chambers to celebrate something of this historical event. And to hear the drums and the Coast Salish language intertwined in the history of the floor of the chambers with all of the history and the voices that were already there – just as one more important piece of history that Washington state could really celebrate – for I think that day we truly were the House of Representatives and all people were represented.

The most powerful moment was standing at the doors and as they open I had my daughter's hand in one hand of the children that came and my mom's hand in my other hand of my mom's teachings. And I had my grandmother's regalia on that came from generations of teachings as the beadwork come from the patterns that reflect my homelands. So to have four generations standing there together and all the history that was taught to us really was monumental for me and I think monumental for everybody that celebrated that great day with us.

What is one thing that you really want to work on as a state representative?

My goal when I decided to run was to really build that tribal state and federal relationship and even bring it in the international relationships. We as a governing body will act as a sovereign. But we know that we cannot do this alone. And we all must work together. And now more than ever overcoming the hate, the racism, the absolute degradation of everything around us just so one person can gain one step ahead of the others doesn't fit into my world of how we think we can succeed in the future. If I can better bring us to look at one another and to be kind, to work on common pathways, to accept the challenges that we may agree to disagree, but then to be able to build a platform where we all look at this place we all call home and we call it ours not theirs, mine, hers, or his.

Was there a song that inspired you when you were running or you think represents your campaign?

There was a incredible song that really kind of grew with me as I ran. It wasn't just a song, it just was a band during that time. I know this sounds kind of silly, but I used to run every day before I ran for office and as I started my campaign I was only able to run three miles, maybe three or four days out of the week. I always ran to Led Zeppelin. My mom and dad were raised on Led Zeppelin. I grew up listening to Led Zeppelin through college. So when I listened to anything from "A Whole Lotta Love" to "Kashmir," it all just kind of came together of bringing my past with me so I could run for my future.

Do you have a favorite song?