May I Interest You in a Brief Survey: Clash Cover Night's Bands Answer Our Question 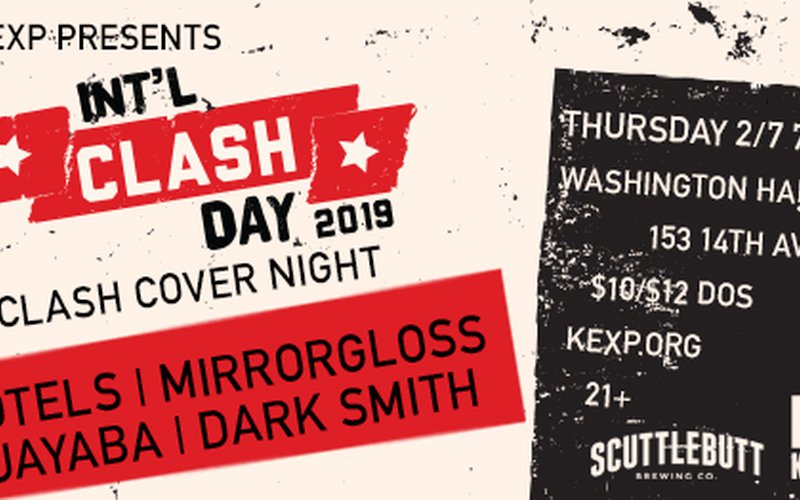 As I'm sure you know at this point, every year on February 7th, music fans from all over the world converge to celebrate International Clash Day, in tribute to the music and social activism of the legendary band. This year is particularly special, as 2019 marks the 40th anniversary of the band's epochal London Calling. To commemorate the occasion, we've been broadcasting live from London for the very first time, but that doesn't mean we're not getting the party started here in Seattle as well.

On the evening of International Clash Day (that's this Thursday), KEXP will host our annual Clash Cover Night, and we've tapped some of the best in brightest in Seattle to participate: Post-punk polymaths Hotels, Tacoma R&B/electro-pop dance trio Mirrorgloss, experimental hip-hop genius Guayaba, and dreamy punk band Dark Smith will all be offering their singular takes on classic Clash tunes. We sent each group a small questionnaire regarding their participation and what the Clash means to them. Here is what they had to say.

Adra: I knew just a few Clash songs before this that were songs that either had catchy and sweet textures. Or like, "Train In Vain," which I had almost forgot was a Clash song because it’s a dude in his feelings, really.

Blake: Protest music with a slammin' rhythm section. Like if Woody Guthrie found himself down on Bowery in the late 70s, did some suspect speed, then walked all the way up to Studio 54 and crashed the joint.

Adra: I think listening to the storylines has been interesting, especially with "Clampdown" -- basically being tricked or forced into the everyday fuckin blah... but then, "Lovers Rock?" Man, look! We’re taking that song in a, huh ... different direction... lol, because she don’t need that thing, you know what I mean?

Blake: Joe Strummer — and to a lesser extent Mick Jones — get all the notoriety in the band, and perhaps rightfully so. But I'm a bass player so I listen to the bass, and lemme tell you: Paul Simonon is pretty frickin' righteous on it; aggressive, in-your-face, ICONIC basslines (the beginning of "London Calling", "Magnificent Seven"). Some real dirt in there, too.

Adra: This is Radio Clash! Those drums?! C’mon! Filthy!

Blake: Gotta second my bandmate on Radio Clash. When I lived in New York in my early 20s and we'd go out dancing, this was THE jam the DJs would put on. It had more groove and futuristic vibe to it than all of the other stuff trying to ape it 20 or 30 years later (the song wasn't new when I went out dancing; I'm not THAT old). I STILL think it sounds like dance music of the future.

Najamoniq: For an African American girl navigating her way thrrough rock music and exploring what I liked, the Clash connected with me because of the beats and the rhythm. I think I was a little young to understand the full scope of their lyrics, but the inclusive sound actually made me feel like there was a place for me in rock and roll.

Del: They always had a coolness factor to me growing up; if I saw someone with a Clash patch or t-shirt growing up I knew that they were cool.

Najamoniq: Their deep connection to the political climate at the time, their willingness to speak out on issues that were important to them and to others. I was also impressed with how relevant the topics of songs “Guns of Brixton,” “Right Profile,” and “Revolution Rock” still are.

Del: They were just as much rock as they were world music aficionados!

Del: Either "Clampdown" or "The Magnificent 7." Anything where they rocked or got funky!

I feel as though my experience is unique in that I had not listened to a full Clash album before being asked to play covers. Many people I know were introduced to them through their parents, which didn't happen for me. I love their socialist and anti-fascist ideals, but the only band from that era of UK punk that I've truly connected with is X-Ray Spex.

What has surprised me the most is the fact that I do not enjoy their music.

"Lost in the Supermarket."

To me, the Clash represent discovery of self; through expression, music, art, sexuality. Just picking up a microphone and throwing your bleeding heart at it, because that's what they did in a way that wasn't canonized yet. There was no blueprint, they just did the thing.

How happy and upbeat a lot of it is. As a kid I remember the Clash being brash, raw and aggressive, but revisiting the songs off London Calling, there's this strong running narrative of hope and resilience in the face of the establishment which is still very relevant and needed — especially in songs like "I'm Not Down" and "Death Or Glory." It's gleefully anarchist.

It's gotta be a tie between "London Calling" and "Hateful". There are too many to choose from!

Tickets for KEXP's Clash Cover Night — on Thursday, February 7th at 7:00 PM at Washington Hall — are on sale now. This show is 21+.