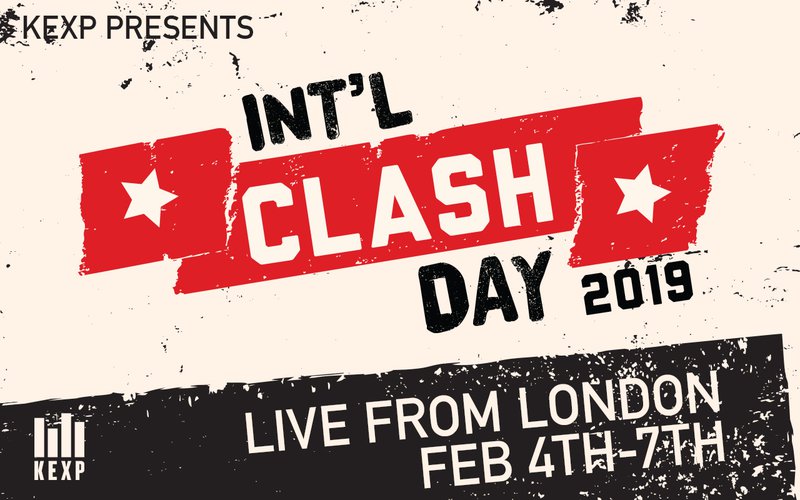 Each year on February 7th, music lovers all over the world observe International Clash Day, an annual celebration of seminal UK punk band the Clash, and a recognition of the enduring influence of their music and human rights message.

This year, Seattle-based nonprofit broadcaster KEXP will travel to London for a 4-day live broadcast and online event, featuring live performances, exclusive interviews, with a special focus on music and message in the Clash’s landmark album London Calling, which celebrates its 40th year in 2019.

The 2019 London broadcast and live video stream will take place February 4th-7th, live from Studio 9294 in London’s Hackney Wick neighborhood, featuring live performances from UK-based and international artists, with highlights from a music scene as diverse and lively as ever. Each act will perform their set for live broadcast on KEXP 90.3 FM in Seattle, online at KEXP.ORG, and streaming live on KEXP’s YouTube channel.

In December of 1979, the Clash released London Calling, a record that laments the destructive forces our world has set loose, seemingly out of our ability to control. It explores our search for fulfillment through addictions and bottomless appetites, and grapples with the eternal question of whether to stay true to yourself or slide down that well-worn path toward comfort, status, and ease. Through melody, rhythm, lyrics, and attitude, London Calling lays bare a modern world that seems empty and meaningless, and calls on us to wake up and take action. It’s a message that still rings very true 40 years after its initial release in December of 1979.

“Traveling to London to celebrate the 40th anniversary of one of the most important records in music history is a dream come true,” said KEXP Director of Programming, On-Air and Morning Show host John Richards. “London Calling is one of my personal favorite records and one of my main inspirations when I came up with International Clash Day. It is also one of the most seminal and important records ever made and a defining moment for the Clash. KEXP also feels it’s important to highlight the amazing bands in London and around England while we are there. KEXP prides itself in showcasing talent in every city we travel to and the fact we’ll be in one of the music capitals of the world makes it even more special.”

“We are thrilled to bring KEXP to London to showcase the most exciting artists making music in the area,” said Live Performances Manager and Midday Show host Cheryl Waters. “We can’t wait to share music from bands like Value Void, Ibibio Sound Machine, Goat Girl, Ghostpoet, Snapped Ankles and so many more with KEXP’s global community of passionate music-lovers.”

“London has an incredibly diverse and vibrant music scene and we’re excited to present a line-up of new and emerging bands celebrating that diversity and carrying forward the Clash’s spirit and message of inclusion, multiculturalism, pro-immigration, anti-hate, anti-racism, and anti-fascism,” said KEXP Chief Content Officer and Afternoon Show host Kevin Cole. “It’s a message we need to embrace and we’re excited to do so with IDLES, Ibibio Sound Machine, Ghostpoet, and more, including Soviet Soviet, an Italian band who, on the eve of a scheduled KEXP performance in Seattle, were denied entry to the U.S., jailed, and then deported. We’re thrilled to finally share a live performance from them with KEXP listeners worldwide.”

International Clash Day began in Seattle in 2013 when KEXP Morning Show host John Richards decided that one Clash song wasn’t enough, and dedicated the rest of his show to the Clash. Over the next few years, the programming grew and expanded, other radio stations started following suit. Ultimately, cities around the world began to officially declare February 7th to be International Clash Day. In 2018, the holiday was celebrated by over 100 radio stations on all seven continents, along with dozens of events and official city proclamations all around the world.

To cap off the week of International Clash Day programming, KEXP is hosting a Clash Cover Night on Thursday, February 7th at 7:00 PM at Washington Hall featuring Hotels, Mirrorgloss, Guayaba, and Dark Smith. This all-star lineup will play songs from London Calling in celebration of the album’s 40th anniversary, with all proceeds benefiting KEXP. Tickets are available now.