Wild Powwers carry a debt to the ghosts of grunge music, but that doesn't mean their music comes from a place of misremembered nostalgia like many of their 90s-referencing peers. From the vocals and guitars (provided by frontwoman Lara Hilgemann) to the thunderous rhythm section (Jordan Gomes on bass, Lupe Flores on drums), every element of the group's music captures the spirit and essence of the style they're influenced by. Hilgemann's voice is a versatile instrument, capable of a variety of tones and emotions, perfectly augments whatever musical accompaniment it leads. On the title track of forthcoming album Skin (out Oct. 12 on Nadine Records), Hilgemann unfurls her voice like a ripcord along to the propulsive, careening alongside her squealing guitar and the 200-ton, runaway truck push Flores' drums and Gomes' bass provides.

The video finds the band performing – wild and raucous, as per usual – in a small room to spectators losing themselves in the music. Psychedelic visual cues are spliced in carefully; visually overwhelming strobes, falling balloons, a satisfied dog who at one point cascades over the crowd. There are medieval capes, cat ears, white suits. A cowboy in an enormous blue novelty hat jams out on a pink acoustic guitar, someone in a Santa suit swigs from a can of Rainier, who ends up shredding alongside someone wearing a black wig and silk dress. Wild Powwers has a tendency to lace their aggressive, propulsive brand of rock music with a healthy dose of surrealism and humor (for example: Skin song titles "Buff Stuff" and "Well, Shit"), so to watch them on stage crowded with balloons or rocking out in front of a green screen with smoke effects and the old-school film countdown timers is to embrace the serious-when-we-feel-like-it aesthetic they've spent the past handful of albums cultivating.

Here's what the band had to say about "Skin" and its video:

"Skin is essentially about the secret, darker personality that lives inside of us. Sometimes it just takes a little bit of vice to have that persona come out and you're suddenly a different person. Like Jekyll and Hyde. Our video is full of strange characters at our show. We're all just trying to navigate these split personalities intermingling with each other."

Watch the video for "Skin" below: 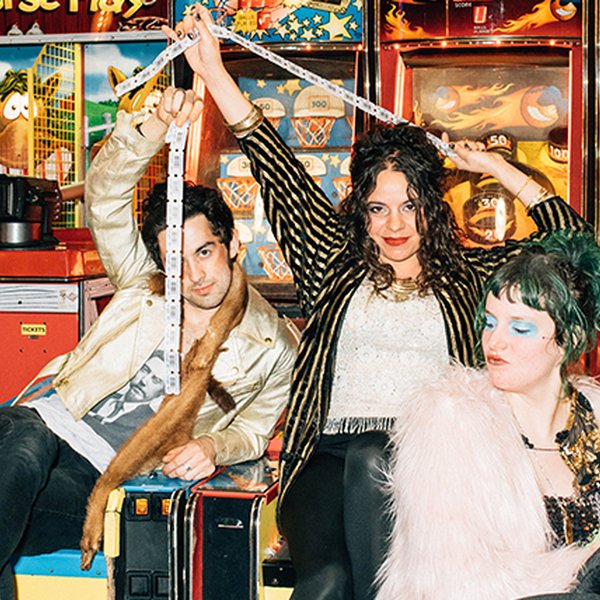