Dr. Dog Embark on Their Latest Chapter with Critical Equation 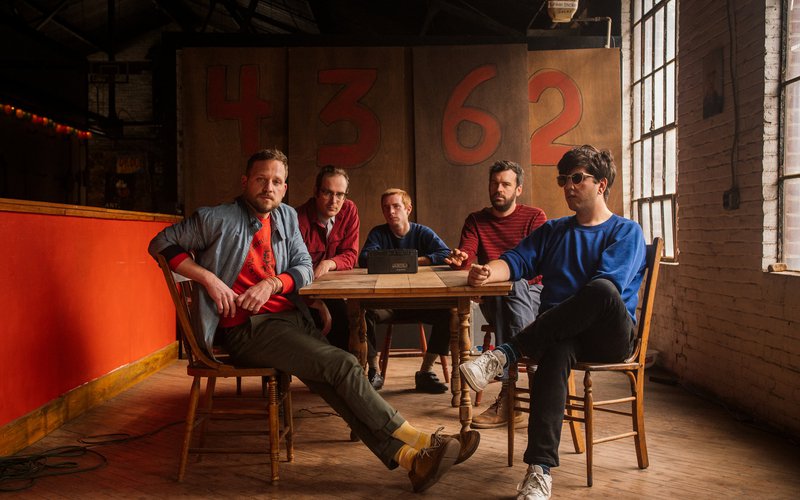 The Philadelphia-based rock band Dr. Dog has a new album out. The record, Critical Equation, walks the line between herky-jerky rock ‘n’ roll and sweet, smooth harmonies. And, in some ways, the through line of the album seems to indicate a new chapter with the band, both musically and in the way the band members examine how they orient themselves in the new world. To celebrate the release of the album, we wanted to talk with one of the founding members of the group, Scott McMicken, about how Dr. Dog — which is set to play Saturday, June 9th in Seattle — got together, when Scott first started writing lyrics and how the group feels now that the album is out in the world.

KEXP: Do you remember when you first start playing with language and music, artistically?

Scott McMicken: I was in my teens. I remember it as a general phase of life. I look back at that time and I remember initially being less in touch with myself and more into the kind of wordplay and the craft of a certain lyrical formula. I think my first obsession with lyrics was with John Lennon and his style. My first foray into lyrics was more on an impressionistic level. I loved the color of words and painting a picture of certain images and the general craft and organization of words in somewhat of a formulaic and systematic kind of way. Songs largely opened in a universal way, rather than dirge-y or introspective. But as I’ve gone on, I’ve enjoyed more where writing is some sort of a window into my own internal world. And how I can understand myself a little better through the lyrical process. To this day, that’s one of my favorite things about it. I don’t always start out with a clear vision of how I feel and some direct way to express that. It can be more ambiguous where I start to explore and come out the other end having found something — if it’s a good day. Writing is a way to check in with my life.

Do you remember the first time the band played together and what you thought would be born out of that at the experience?

I sure do! I remember it all very vividly. [Band mate] Toby [Leaman] and I had been playing music together since we were about 13. We were grumpy little kids, perpetually irritated and aware of how badly we sucked. But we thought something was out there waiting for us, some aspect of music. But it really began when we started playing with our friend Doug at the time. I remember the indisputable sense of joy that came out of us getting together and playing in those days. It was very scrappy but in some way or another, we managed to find the spirit that we were looking for.

It wasn’t super conscious or this natural evolution of things. But right around the time we started playing with Doug, that was the first time for Toby and I when we truly just had unabashed joy playing music. And we weren’t frustrated by our inabilities. And a lot of that, too. was we were ready. But Doug was a super formative person in the band’s history. What he brought to the table was this vast knowledge of esoteric but cool pop music and the sense that this whole DIY ethic could work, that you didn’t need to wait around until someone called you into a big studio.

That’s about as huge as things get in the history of our band — that and the introduction of vocal harmonies. Doug introduced us to the Beach Boys, sat us down and told us what to sing. And then, lo and behold, we were harmonizing. It’s funny, we knew Doug, we went to high school with him, but it wasn’t until we went to college that we started playing music together. We weren’t playing for many people — a house show or bar or at a friend’s party — but it felt very alive and very inspiring. So me and Toby eventually quit everything else we were in. We were in five different bands and we quit them all. Dr. Dog was designed to be anything we wanted it to be. We never felt pigeonholed. If our taste took us to death metal, there was nothing stopping us.

Dr. Dog doesn’t really sound like any other band. Sometimes the music is sweet and sometimes it’s herky-jerky. Did you always feel confident in what you all were making together?

No. A lack of confidence is a constant plague along the creative process. If it’s one thing I could speak to most at this moment in time, it’s this aggressive way of engaging insecurity that’s going on in this band. It’s so easy to let your confidence get rattled. Of course, there’s the aspect of how good you play your instrument, how well you know your history, how well you know your way around the studio, but it begins with a fundamental attitude you have towards yourself. The more confidence you have, the less resistance you’ll find to your own natural honest creative spirit. That’s been something up to this moment we’re very aware of. Over the years, a lack of confidence has been a very difficult aspect of the creative process. It defines the struggle and defines the work ethic. But you have to keep pushing.

And that dichotomy is also something I’ve strongly identified with in this band. None of us want to sound too much like we know what we’re doing. To all of us, it’s way more relatable when you are the underdog. It’s like this notion when it works out it’s this kind of miracle. That to us is the holy moment. For all intents and purposes, like, this should not have worked out! But it succeeded. The scrappy style is naturally a part of who we are. With exception to [band mate Eric] Slick, all of us are self-taught, and all we know how to play is the music of the band. The scrappiness is just kind of the truth to who we are. It’s become something of a point of inspiration and something that draws us to other forms of music that we all like.

You are one of two main singers in the group. This doesn’t always work out so well in bands. What benefit does this dynamic bring to Dr. Dog?

I think it provides a good push and pull. Like, you can never spend too much time lost in your own ideas because half the time you have to shift to something else and follow orders. Toby and I have known each other for so long and embraced each other’s differences. So there are benefits to being able to step out of the spotlight and learn from each other and take each other’s criticism and follow each other’s whims. Because we have a good relationship, it only serves as an artistic benefit to have one another and share the same goals. But we’re both essentially working separately from each other in life. We don’t write songs together, we just throw them all into the same pile.

Many of the songs you sing in Dr. Dog come off philosophical or existential — as if you’re pondering the very nature of things. Did you study philosophy?

Yeah, I did. I got a degree in philosophy at Westchester University, the state school in Pennsylvania, which is about 45 minutes outside of Philadelphia.

Philadelphia is a very specific east coast city. It’s at times brusque and at times beautiful and under-appreciated. How does the city influence your music today?

I like to identify with that aspect of the city, with that underdog mentality that seems to serve me so well and serves us a band so well. When we moved there for music, it felt like a place that wasn’t dominated by any one strict particular sense of a scene. And I suspect that was very helpful — not having to adhere to anything else going on. We put ourselves in a cultural hot spot to be in a music scene but at no point did that distract us from our own personal vocabulary. I don’t know if the city is the same now, it certainly has grown a lot. This was about 18 years ago when we moved there when there was barely any rock music going on there at the time, which was cool. We were playing with people of all genres and styles. I do feel a kinship with that city and we as a band do, too. I know our early experience was really encouraging.

On the final song on your new record, Critical Equation, you sing the refrain, “Coming out of the darkness.” Is there a particular darkness you feel you’re coming out of, or a type of thing you’re no longer making time for?

The darkness, in the context of that song, means coming out of a sense of loss of self. Lost in all the rational thought and the pressure that’s self-imposed, trying to figure what everyone else is thinking. Overly complicating my mind and self, which for me and a lot of other people, once the gears start turning, is typically a negative experience. I find the most comfort and inspiration when I can feel in touch with the nature of my intuitive self. And feel comfortable with that and love myself for it. In terms of music and creativity, there is no limit when things just happen and feel right.

That song is a meta-statement of that idea. When I sat down to begin writing that song, I was lost. And that darkness of my own overly-competitive mindset was eating me up with doubt and pressure. During the process of writing that song, that line came dribbling out of my mouth. That’s what I felt in the moment. I was jamming with this stupid keyboard for an hour and wondering if I should give up when that line came out. And in no time, like fifteen minutes later, the thing was done. Then I wrote several more songs that night. There’s something mechanical about it, about doing that work. It begins by quieting down your mind and letting yourself be intuitive. It’s a challenge and everyone knows it. But you have to work at it. It’s one of those things in my life, in order to do it, I have to stay right and in the service of it. And that keeps me moving in the right direction, for the most part.

Critical Equation feels triumphant, as if the band has figured out something. Do you feel particularly victorious now that the record is out in the world?

Totally, man. It’s one stop along the way in a broader process that’s still going on and continues to go on. I’m 100% fully satisfied in the choices we made and the experience we had [making the album]. I felt like it was very much in line with what goals we’re trying to shape for ourselves. It’s encouraging for the broader mission that is still active as we go out there and tour and do our thing and even as we think about making another record. It was educational and right in line with leading up to trying to figure out the next move. And I feel like it has set us up to move forward with a great deal of inspiration.

Critical Equation is out now via Thirty Tigers. The band plays Saturday, June 9th at the Moore Theatre.