Behind the Board w/ Alaia D'Alessandro 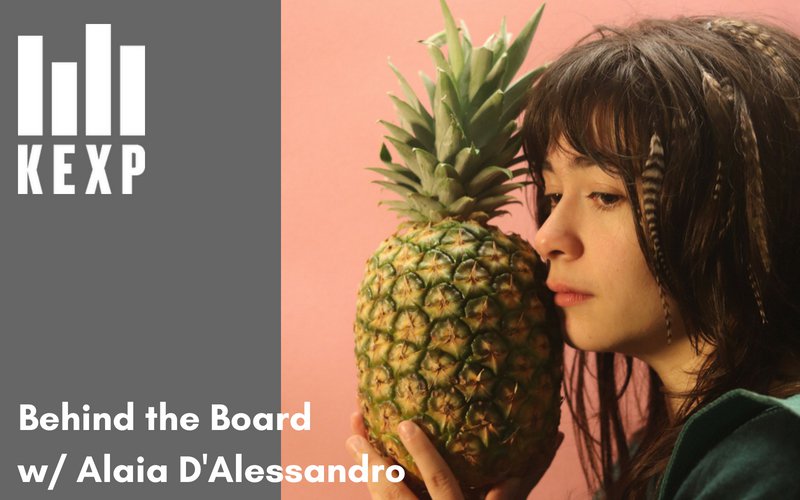 Alaia D'Alessandro, the newest member of KEXP’s video team, has already logged some serious miles as a videographer, including a trip to Iceland Airwaves with KEXP.

Alaia’s passion for music had also taken her on journeys outside of her role at KEXP. Describing a trip to the Faroe Islands to capture footage and interview musicians about how music affects the way of life there, Alaia says:

“There is something so powerful about the way music connects people to their culture and environment. In the Faroe Islands, the weather is very wild which is reflected in this practice where musicians take a boat out to the grottos and improvise electric jazz to the rhythm of the waves crashing against the walls of the cave and the movement of the wind.”

In addition to working behind the camera, she creates music with her band Tres Leches and as a solo artist. We spoke with Alaia about being part of the KEXP video crew, her musical projects, and more.

What are some of the places you’ve traveled to as a member of the KEXP video team? Do you have any favorites?

Traveling to Iceland for the Airwaves festival was a great experience. It’s very hectic because you’re immersed in the festival every moment of the trip which is total chaos but I love it. You wake up early to grab breakfast at the KEX Hostel where we film bands. Then you film bands from AM to PM. The year I went I got to capture the intimate setting of performances by big acts like Kate Tempest and The Sonics, and I still got exposed to amazing acts I had never heard of like Moji and the Midnight Sons and asdfhg.

After the long work day there’s still music going on late at night and you can’t really help yourself. Saying no to music is a really hard thing for me, especially if I just had the feeling of inspiration from a long day of shooting bands. I’ll usually figure “Well I’m tired any way! Let’s keep it going!” and continue seeing bands till 3am.

I love the punk bands in Iceland. People are always moving to them and it helps keep you engaged. A favorite moment was seeing Jim Beckmann holding hands with photographer Jim Bennett and gleefully jump up and down to FM Belfast. If that’s not team building I don’t know what is.

After a long night, it’s really lovely to take a meditative walk home through the quiet town of Reykjavik. One night I walked over to Hallgrímskirkja and just layed down in front of the giant beast and took in the fresh cool air of the rising morning. It was a serendipitous end to the night and fitting beginning to the next day.

Describe your role on the KEXP video team and how you interact with your teammates?

We all switch between camera operating, producing (setting up lights and shot composition) and editing. Shooting is probably my favorite part of the job because it gets me to access a part of my brain that feels similar to a “fight or flight” mode. You’ve got to keep very focused while staying open enough to adapt at any moment. You’re listening to the music and thinking about how your shot is going to work with the edit, while also thinking about what instrument you’re going to shoot next and keeping an eye on your camera to make sure your framing, movement, and focus are all there.

I also get to work with high school students at the Center School for KEXP’s Audioasis Youth Initiative. It’s really cool to have students come into the studio and be in awe of what the video team does, then by the end of the semester watch them doing it themselves. They get so good that we could post some of their edits. That’s really impressive because some of these students have no prior experience. One of the things that impresses me about people is their ability to learn and this is a great example of that.

In addition to your work behind the camera for KEXP, you create music as member of Tres Leches and a solo artist. Are these types of expression completely different or are there some similarities?

I joined KEXP as a volunteer in December of 2013. Helping lift others up has been the best way for me to connect. That runs true from what I did in the Faroe Islands to the work I do today at KEXP. I’ve learned so much from these experiences and there are so many unconscious influences.

Working at KEXP has definitely influenced my playing in Tres Leches. I just couldn’t quite put into words how because I think it’s mostly in an unconscious way. On top of that helping others has come back around to me in very tangible ways. I was so impressed with Tres Leches’ turn out to Upstream Music Festival. It was pretty clear people were there to see us specifically and I’m really grateful to KEXP and City Arts because I think a huge part of it was that they helped us put out our singles “What Are You Doing” and “No Llores” and it spread the word about our show.

I also had a great moment the other day where I was editing a band called, “Newaxeyes” that I hadn’t filmed. I was really digging the session and then all of a sudden cried, “OH!” when a guitar lick came in because I had actually heard this band when I was practicing at Crybaby Studios. I heard them practice that song a lot and I really loved their sound and always wanted to know who the band was. I have Sharlese Metcalf to thank for that. She’s so engaged with the local music scene.

Sharlese helps curate a series called Mastering The Hustle and information from that series helped me out of a tricky situation in Tres Leches. We were playing Hoodstock and the PA cut out. All of a sudden had no vocals. Engineer Julian Martlew’s advice from MTH came into my head. He said something like, “A band has to know how to adapt to play anywhere.” and I told Zander and Uli, “Hey! We’re an acoustic band now!” and Zander went down off the stage into the audience and sang to them without a microphone. The audience actually really liked that format and it was fun for us as well because we got to be very close with people. Everything felt very connected and it came from something very different.

Are you ever surprised by the passionate reactions to KEXP’s YouTube videos? Were there any that just stood out when you filmed them as being utterly compelling?

Honestly, it’s hard to tell sometimes. Some of my favorite artists have been just torn apart by people commenting on YouTube. There are a lot of people that comment on YouTube and it’s clear a good chunk of them are just people who are afraid and/or really angry at themselves. Especially the ones that are like, “Hey this band suxxxxxxxx have my band instead!” That always makes me laugh and I get happy because it means we are showcasing artists that have an impact on people.

A lot of great artists have been seen as too weird or too controversial. I mean Prince and Grandmaster Flash were both booed off stage. I’m glad we don’t let those comments change our programming and continue to support music that is different. That’s what keeps me around at KEXP and I think it’s similar to Tres Leches’ situation at Hoodstock: it’s the “out of the ordinary” that draws a connection to the right people. Some of my favorite shoots have been Boogarins, Floating Points and Le Mystere des Voix Bulgares.

What is your gear setup like at KEXP? What cameras and software programs do you use? Is there one piece of gear that is absolutely essential to your job?

I love our EZ Rigs. I definitely got buff when I first started this job because we used to hold our cameras without much support. The EZ Rigs take all the weight off of your arms and upper back and put it on your hips which is much healthier. A half hour shoot used to feel like an hour at the gym. Now I could shoot all day with the EZ Rigs. It did kick start my weight lifting though and I’m happy that that’s a part of my life now.

What is it like to be a part of the KEXP team? Has your relationship to the organization changed since your started working here?

It’s funny to think back to when I first got the offer for my internship. I remember thinking, “Why did I sign up for this? Why did I think I can do this?” That fear always hits me whenever there’s something that’s really important to me. I take it as a sign that I have to do that thing. I think it’s also an unconscious fear of change. As much as I absolutely love to learn, change can be a terrifying process.

I’ve grown a lot since I have come to KEXP. I’ve definitely become more engaged in the local music scene. I got comfortable speaking to artists which is useful when you want to genuinely connect with a person. That feeling also helps me identify the most important moments in my life, like when I met Benjamin Clementine at the David Byrne concert in Portland last month. When I feel the same shock as when I first started at KEXP, I know I’m doing something important.