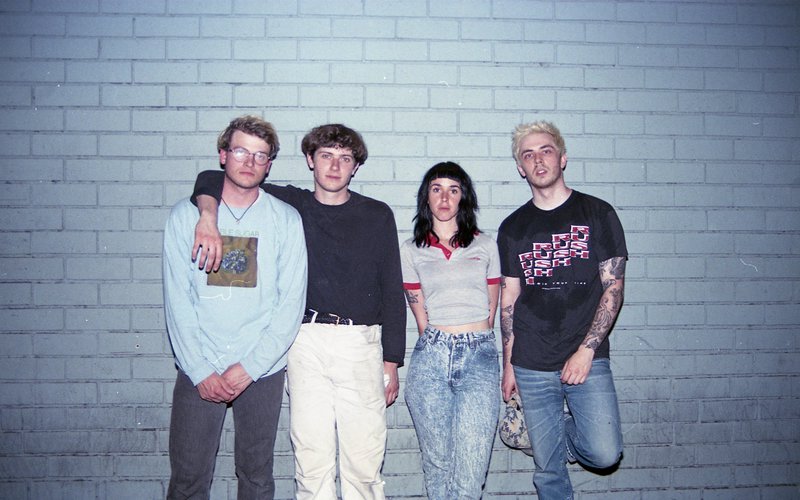 Throwaway Style is a weekly column dedicated to examining all aspects of the Northwest music scene. Whether it’s a new artist making waves, headlines affecting local talent, or reflecting on some of the music that’s been a foundation in our region; this space celebrates everything happening in the Northwest region, every Thursday on the KEXP site.

Chunks of Broken Water. A tiny dash of Mudhoney. Seasoned heavily with Wipers. Add a melange made up of ingredients of the current landscape of Seattle’s distortion-heavy, punk-leaning rock scene and you have yourself something close to Big Bite.

Big Bite continues a longstanding tradition in Northwest rock music, tightrope-walking a thin line between massive, populist, clobbering songcraft and warped, messy, loud abstraction. In this binary, one of these combined approaches usually supersedes the other; either a little too catchy to embrace its weirdness or vice versa. Big Bite is an enormously luring rock record, propulsive and monolithic, with enough sense of self to not smooth over the jagged edges of their demos and early singles.

The rhythm section of bassist Erica Miller (also of Casual Hex, who released one hell of album in Zig Zag Lady Illusion in April) and drummer Allen Trainer (also of Strange Wilds) constantly push the music forward, slyly leading the charge into seasick tempo changes like the sudden halt into the woozy outro of “Relentless Hearing.” Listen to the way they open the album, a steady as a heart rate during a sprint on “Pure of Heart,” just to stay in lockstep as they slow down and charge through again.

Ferried by the versatile-but-grounded work of the rhythm section, the guitars – played by Graham Baker (also of local favorites Versing) and frontman Matt Berry (also of the Berries and well-known for his work in Oakland band Happy Diving) -- gnash all over the foreground of the band’s songs. Depending on the mood, the approach of the six-string mastery veers between pulsating, opening credits-type riffs (“Faith”), lighters-out guitar work leading to a dust-kicking blur (“Snake Eyes,” “Old Mood,” “Paralyzed”), and staggering, stop-and-go blasts (“War”), all adopting the popular guitar playing approach called Greg Sage on an Uncharacteristically Sunny Day.

Buried in the din somewhere – but not so far as to ignore their emotional power – are Berry’s vocals, calm and somewhat diffident regardless of what sort of storm of guitars and drums is around him or the tumult he sings about. His voice is a calming, sometimes narcotized presence; somewhere in the terrain between a croon and a bellow. Though there are exceptions. On “Fire Rising,” Berry sings almost desperately for connection, on “Relentless Hearing” his voice and words are sharp and punctuative.

For such a focused set of songs, Big Bite has crafted an album expansive in the duality of its moods. Equally concrete and esoteric, moody and buoyant, overcast and scorching, Big Bite has unexpectedly joined the pantheon of stellar rock records superlative for plowing through a Seattle summer. In our Local Artist Spotlight on Bujemane, the Tacoma artist alluded to a project dropping imminently, and lo and behold, a nine-song EP drops while I'm wasting time on Twitter. PBOTY -- which stands for Pretty Bitch of the Year, the luminous distinction (swiped from TYTHBAVFE highlight "Swerving Lanes") revealed and bestowed upon Buje in the release's opening track -- is a brief and lighthearted romp through the streets; blowing through money, bedding attractive women who walk right past you without speaking, and "driving two miles an hour so everybody sees" like Will Smith in the "Summertime" video. Just in time for the rise in temperature. Listen to PBOTY on Bujemane's Soundcloud.

June 14: A Place to Bury Strangers, Sextile, and Haunted Horses at The Crocodile