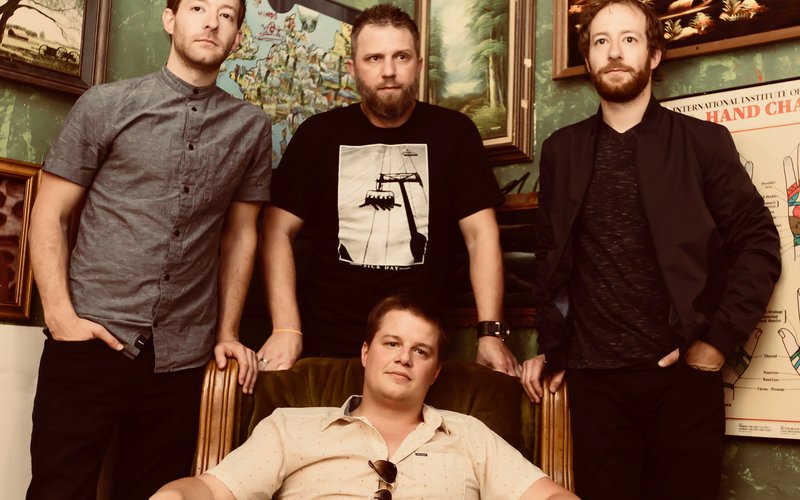 Roll out the red carpet: local band Dirty Rugs are bringing back the raw, rock sound of the '90s. Formed by Cody Plaiss, Cody DeCant, Josh and Ben Phelps in December 2017, Dirty Rugs can pivot from a swagger-laden punk-pop sound (like in the previous single "Glimpse") to a more somber sound, like in the single "All Free."

Today, KEXP is excited to present the third single "We’re All Dying (I Feel Alive)" and its accompanying video. Don't let the mullets and pick-up trucks sway you: there's no twang to be found here, just a fun punch of power-punk, a boisterous rhythm, and chant-along-style vocals. We asked the guys about the clip and about future plans for a full-length.

KEXP: Tell us about the concept of this video.

Cody Plaiss (guitarist/vocalist): We were brainstorming ideas for our first music video. We wanted to make it fun and memorable but weren’t exactly sure what to do that would be within our budget.  Around that same time we, as a band, had become obsessed with singing “Should’ve Been a Cowboy” by Toby Keith and adding as much southern drawl as we could muster. We decided to watch the video and were hysterical at how cheesy the video was.  At that point we kind of honed in on making a cheesy video and looked at some '80s/'90s  videos for ideas. Another big inspiration for some of the shots comes from “Separate Ways” by Journey. Both are amazingly cheesy videos to watch and it made filming ours really fun.

Did you work with a director or do it yourself?

Josh Phelps (guitarist/backing vocals): We asked David Rzegocki and Curtis Emerson at Urban Elements if they would be interested in the project, and after we told them our idea, they were all in. They are good friends of ours and Ben and I had worked with them before. They do great work and we knew they were the right guys for the job. With David directing and Curtis as Director of Photography, they maintained our vision while encouraging collaboration and creativity.

You have two people named "Cody" in your band.  What’s your in-house way of keeping them straight?

Cody Decant (bassist): What we mainly go with is PapaCody or Cody 2.0. I am the older of the two so naturally, I am PapaCody. To make things more confusing I am Daniel Cody (go by Cody), and he is Cody Daniel. Also, Ben and Josh are identical twins… So with two Codys and twins, sometimes we don’t know who’s who or what’s what! Sometimes we joke a better band name for us would have been "Cody Phelps."

How did you guys meet?

Plaiss: The short story is we all used to play lots of shows together in our old bands.  Me and Papa Cody were in Po’ Brothers together and the twins were in Lanford Black. When Po’ Brothers broke up, I started recording some stuff on Garage Band. I showed Cody some songs and he was on board… then one day I was at Chop Suey and ran into Ben. I showed him “Glimpse” on my cell phone and he was interested. We got together at Rainier Brewery, jammed some songs and we realized we needed a lead guitarist. Ben brought in his brother Josh and we’ve been playing ever since.

What are your plans for new music? Will there be a debut EP or a full-length?

Ben Phelps (drummer): "We’re All Dying (I Feel Alive)" is the last of three songs that we recorded this last summer. Although we released each track as a single, I suppose you could call this collection of songs our debut EP. We felt that each track had its own unique quality to it and releasing them separately would create the most impact. We have a ton of new material in the works and cannot wait to get back in the studio. Our hope is to release a full length by the end of summer 2019.

The single "We’re All Dying (I Feel Alive)" is out today. Dirty Rugs will be playing Saturday, November 17th at Conor Byrne Pub as part of the sixth annual Freakout Fest, organized by local label Freakout Records.