The river of rock n' roll (and rap and country and...) that was winding through Pioneer Square has dried since the Upstream Music Fest + Summit ended a couple of weeks ago, but we're taking a last look back at the weekend full of music (and rain). Join us for a final splash through what was Upstream.

Since emerging on the Seattle outsider rap scene in late 2016 with the Black Trash/White House EP, Guayaba has established a loyal fanbase, vocal and present at this set in the subterranean Kraken Congee space. As part of local collective TUF's showcase, Guayaba sang and rapped while bathed in red light, her stage presence captivating the jam packed space. The artist's set closed with the gorgeous Black Trash/ White House finale "Paloma," the crowd hushed in deference to Guayaba's vocal power. (MH)

By the time Boyfriends started playing the Piranha Room space, a small crowd had gathered outside of the venue, unable to enter due to fire code restrictions which capped the venue at just 49 heads. While this writer eventually was luckily given entry to the room around song three, at least thirty potential crowd members were unable to enter, despite the space being under half full. However, that being said, Boyfriends once again reaffirmed their status as one of the best live bands in Seattle during their 35-minute set. Though playing with a drum machine, Boyfriends were joined by a green sequin-clad backup dancer, who was equally matched by dance moves from Boyfriends's endlessly magnetic lead singer Michael McKinney (donned in crop-top and red cape). The band's guitar-bass interplay from Sergio & Shawn remains as tight as ever. Despite the strange venue, the show was a celebratory affair, the band highlighting material from their forthcoming full-length. (MH)

So Pitted lived up to their name (originally taken from a meme). By the time the band was through their first song, "Feed Me" from 2016's excellent neo LP, guitarist/drummer/singer Liam Downey had cut off his bleach-blonde pony tail, affixed it to the front of his head with a glowstick, threw a piece of industrial foam into the crowd, and passed around a dubious beverage (later identified as Crystal Lite). So Pitted also sounded amazing in the Piranha Room space, playing highlights from neo along with unreleased material which ensure the band's continued relevance in Seattle's no-fi punk scene. (MH)

The award for best dressed band of Upstream found an early and decisive winner in Seattle garage rockers, The Hoot Hoots, who took Nordo's Culinarium in matching black shirts with sewed on rainbows stripes, a rainbow dress, and five pairs of Kanye West-style sunglasses, each glowing with different colored neon lights on their front.

The Hoot Hoots dressed like DIY Daft Punk, and their music was just as much fun, capturing both the pop perfection of the New Pornographers and the raucous joy of the Unicorns. Drummer Chris Prairie and multi-instrumentalist Holly Prairie -- Seattle indie rock power couple, anyone? -- beat floor toms with reckless abandon, in glowing red and blue glasses respectively, while singer Adam Prairie (Chris' brother) yelped whimsical lyrics about ghosts and Star Wars, shaking his shaggy brown hair. Above it all, the rest of the five-piece supplied soaring harmonies and Beach Boys-worthy countermelodies.

Look at it this way. It takes a special kind of band to turn a small room of 30 Seattleites on a late Thursday night into a sweaty dance party. But the Hoot Hoots did just that and -- unlike many performers who will, in a plea to get a crowd into it, beg fans to come to the front -- did it completely on the strength of their performance.

It started with a few folks dancing in the aisle, grew as a few latecomers staggered in off Main Street, and climaxed when, during the world-pop stomp of "Hands of Dead," a whole table of folks stood up and began pounding their feet on the wooden platform beneath their seats, shouting cheers for a band they now loved, but didn't yet know the name of. "What is this? The Woo Woos?" one woman shouted at her friend, who was now clapping along the song's pounding beat. "Woo! Woo!" the first woman ululatwed after the song ended, before keyboardist Christina Ellis had a chance to clarify the band's name.

When the set finished, another woman turned around, half-asking, half-exclaiming to her friend, "did you hear that?" They were standing beside each during the show; Of course she heard it. Somehow, the question made sense; when you find a new favorite band, you want to make sure everyone knows about them. With performances like this one at Nordo's, it shouldn't be long before that's the case. (GP) 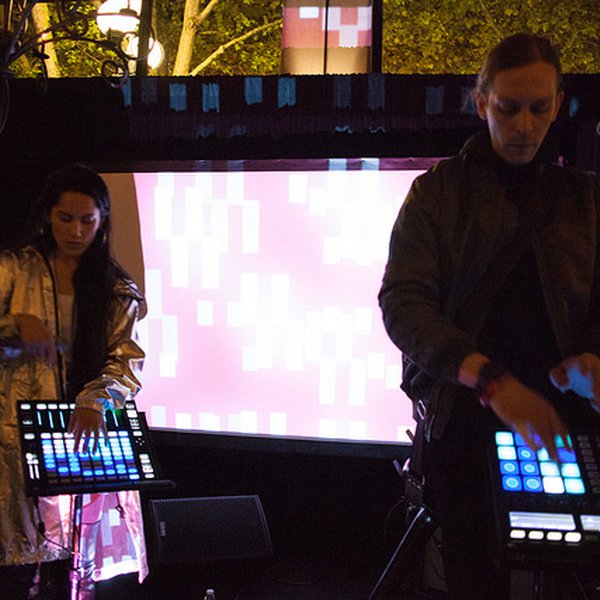