It had begun to rain and the only people around were the sound guys, who were still trying to figure out what kind of music Ray played, sitting safely beneath a tent 50 feet from the stage. Five minutes before the show, still nothing. Then, with only a minute to spare, fans filled the cobblestone space in front of the stage, the Seattle sky stopped spitting, and Porter Ray began his set. A flock of photographers -- nearly a dozen -- descended upon the pit in from the stage, like sharks smelling blood. It was clear that Ray was the man to see.

Ray opened with "Waves," the first song from Watercolor. For those unfamiliar with the song's crescendoing intro, it might have looked like the lanky MC was nervous from all the attention. He stood at the back of the stage, head concealed in a patterned scarf, mumbling softly into his mic and staring at the ground. As the intro ended, Ray reached full volume, spitting sixteenth notes with over a chilled-out trap beat, and easing towards the front of the stage. After the neighborhood-checking "East Seattle," fellow Seattle MC Nate Jack joined Ray for "Bulletproof Windows." Trading verses with Jack over a laid-back, jazz-tinged beat, Ray stepped out on top of one of the speakers in front of the stage. The bass boomed, cameras clicked, and Ray's frame loomed large.

Though the crowd numbered above 100, it was still a small enough space for Ray to be heard, speaking to Seattle fans directly as a tech quickly exchanged a faulty mic between songs. He joked in between songs: "I told my manager if no one showed up, I'd perform for the rain drops." Weather aside, it's hard to imagine him facing small crowds in the future. His newest single, "Russian Roulette," a sexy, club-oriented jam featuring a hook from KEXP DJ Stas THEE Boss, got the crowd moving. A woman in the front row swayed back and forth against the front-row barricade, a rubik's cube-resembling purse jangling at her hips, dudes in beanies bobbed their heads, and even a man in a wheel chair, previously grooving hard in his seat, decided to stand up and dance on one leg.

If Ray's performance on Thursday night was any indication, small home city shows may soon be a rarity. Ray plays the Fuel Sports Beer Garden this Saturday at 4:15 PM. Catch him while you can and you might one day be able to brag, "I got to see Porter Ray at Upstream... before he got big." 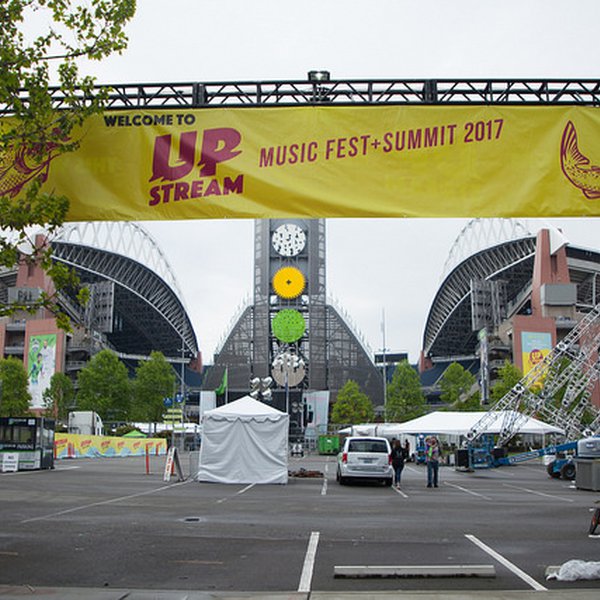 The first day of the inaugural Upstream Music Fest + Summit is over, but a second day of performances is just beginning. Tune in to hear KEXP's coverage from the Little London Plane in Pioneer Square. For the next two days, KEXP will broadcast programming, as well as exclusive live performances, ...