Gorillaz is a project that was birthed from Damon Albarn and Jamie Hewlett’s long nights of subjecting themselves to MTV music videos. The idea was that the band would be a comment on the lack of substance in the videos that they repetitively sacrificed their eyes and minds to. That was in 1998, and now in 2017, technology has gone through major updates and so, too, has Gorillaz’s playful investigations of substance pertaining to virtual and physical realities.

Their new album Humanz was described by Albarn as a “party for the end of the world” and the content touches upon everything from the power of computers and phones to the power of love. "Apocalypse" isn’t a new theme by any means for Gorillaz as both Hewlett and Albarn have spoken on how their obsession with zombie cinema has influenced their outlook on people. In an interview with Wired.com, Hewlett says, “Once, I looked out the window where I work and realized that everybody was walking around in circles with their mobile phones attached to their heads – it reminded me of that scene from Dawn of the Dead in the car lot.” The "party at the end of the world" concept came in the midst of polling for Brexit and the United States' presidential elections. Collaborator Pusha T said Albarn wanted to write it as a premonition for a large change or, “for the world if Trump were to win.” Damon’s foresight seems fitting for a person who has traveled as much and collaborated with as many people as he has. His experiences contrast to the virtual-zombie-reality in which the modern-day First World person spends much of their existence. A reality where we can tailor exactly what we will let into our minds and the most pertinent of events become just as plastic as a viral video. It becomes hard to tell where our physical reality begins and ends which Damon Albarn seems to be very aware of. 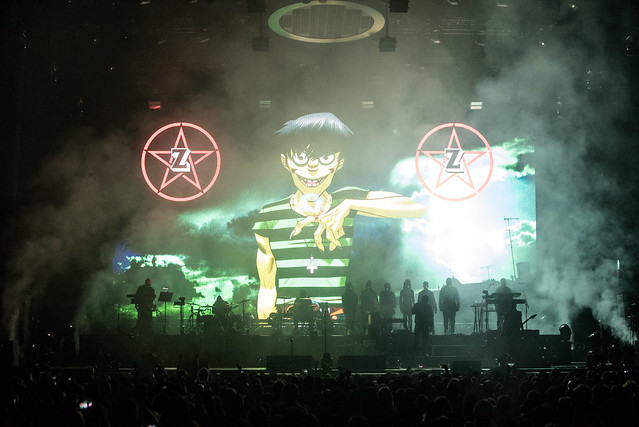 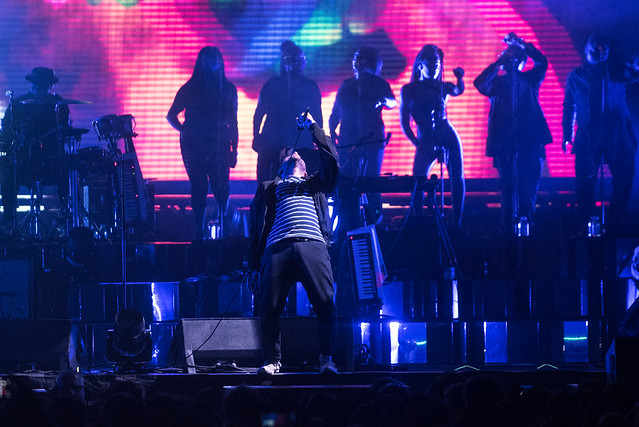 Baring all this in mind, my head was buzzing when I arrived at Key Arena, greeted by attendees dressed in everything from fine suits with light-up neon trim to painted jackets endowed with flowers to costumes of the characters from the Gorillaz comics. The event was part-comic convention part-concert, which is very fitting for a project of which the two main founders are a musician and a comic book artist. The concept of the virtual versus physical is brought to us through the stage set. Above the audience hangs a circular screen, which interplays with the main screen behind the band. Two additional screens hug the sides of the stage to display live footage shot at the concert. 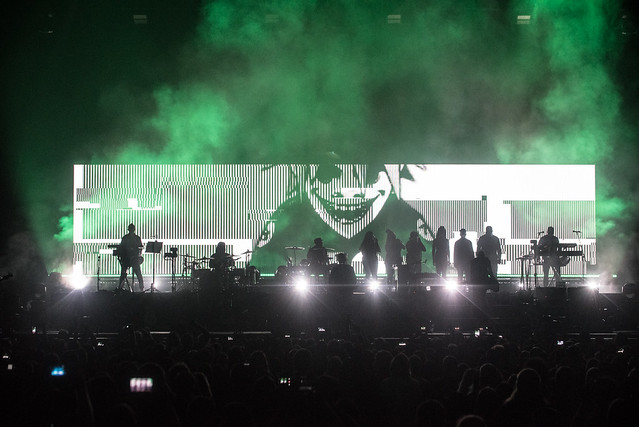 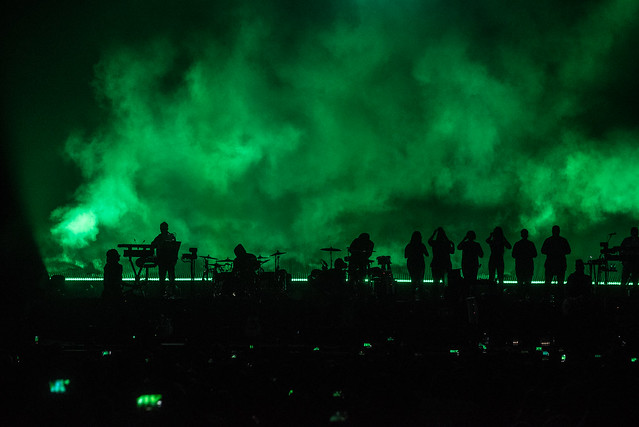 The set is first put to use with a blast of green light. An ominous “HELLOOOOOO!” welcomes you to the main attraction. The greeting turns into a distress call reflected in static on the circular screen. It’s the beginning of the 2001 Gorillaz track “M1 A1”, a song that Albarn wrote while watching George A. Romero’s Day of the Dead. Albarn and the band approach the stage accompanied by a choir. As they get into the meat of the song, Albarn takes the front of his stage with his guitar and guides the arena into chanting, “la la la la la la la la la hey!” Did you write this for a crowd of zombies, Damon? 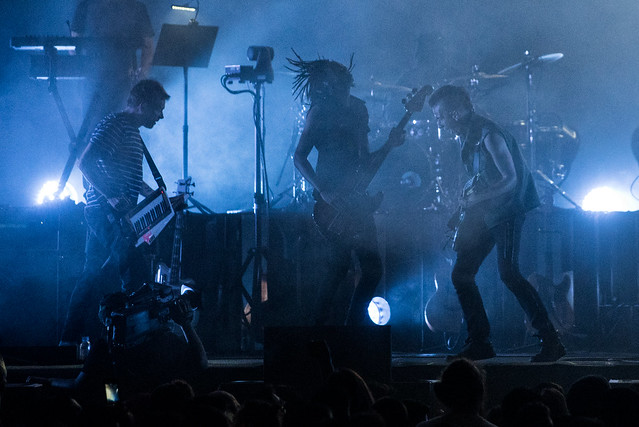 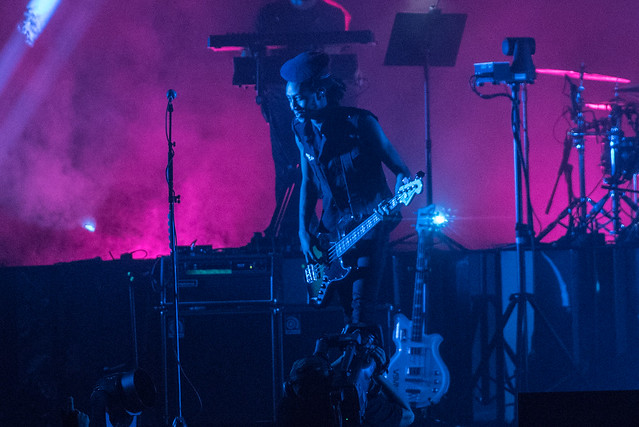 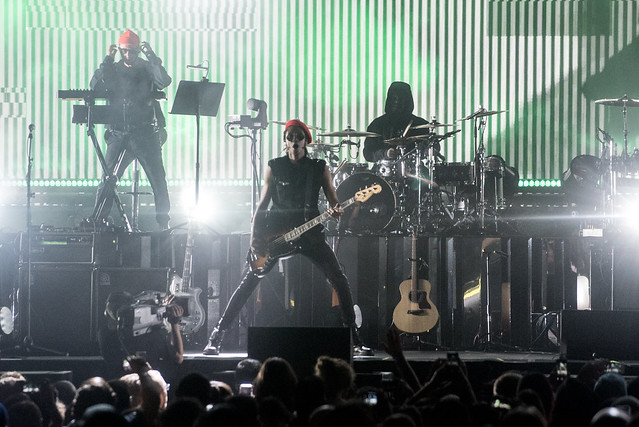 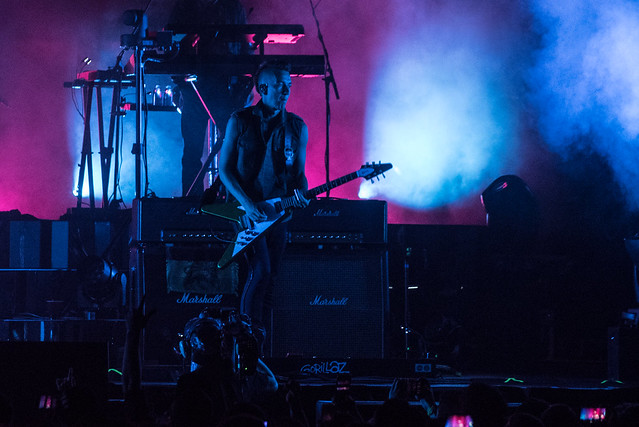 He is framed with just the coolest backing band I’ve ever seen. Bass guitarist Seye Adelekan and lead guitarist Jeff Wootton look like wastelanders prepared to face the apocalypse, with their sleeveless punk-rock cargo shirts exposing their muscular arms that wield their instruments like machine guns. Adelekan dances with his bass like it’s a queen he’s met on the dance floor who he wants to treat right, while Wootton appears to have a love-hate relationship with his guitar, holding it dearly to his chest before thrashing it violently against his body. It’s a lot to take in, much like the music video for “Strobelight” where animation is blended with live action so swiftly that you lose track of which is which. Here, too, on Gorillaz’s stage the separation between digital and real-life performers is blurred.

Damon’s persona shifts throughout the concert to match the change in the music. During “Saturnz Barnz” the bulk of the performance is carried out by a virtual Popcaan rapping on the big screen while Damon sits coolly on the side of the stage swinging his arms and legs to the beat as if he’s chilling at his flat instead of at a concert. This was in sharp contrast to “19-2000” in which he implements high-pitched salutes as he goes over to the side of the stage and shakes his hips teasingly towards the crowd in the high seats. He turns to the crowd in front of and reaches his hands out only to pull them back with a satisfied smile as the crowd reaches desperately for him. Are you laughing at us, Albarn? Do we look like zombies reaching for a piece of meat? 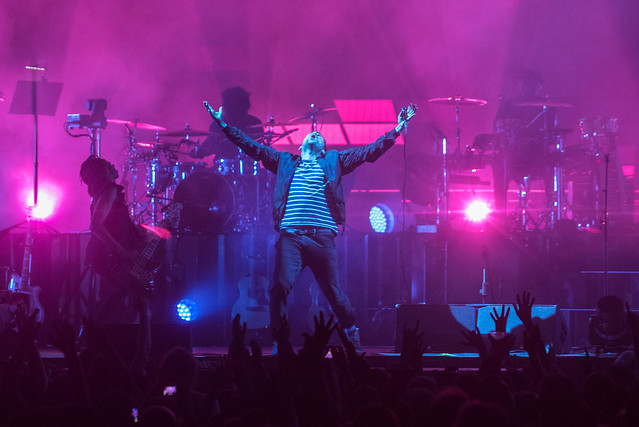 Regardless of whether or not we look like zombies to them, Gorillaz is not a band to remove themselves completely from their audience. Albarn gets more sentimental for "Busted in Blue", a song off Humanz centered around the roles of modern computer technology. It’s the only song on the album where he’s the sole vocalist. A light in the back of the stage waves back and forth and commands a sea of light to appear. The audience has all turned on the flashlights from their phones on and is waving them back and forth. What have you created now, Gorillaz? Is our usage of our phones a reflection on our will to follow you blindly and drown in a sea of screens? Or as our sea appears on your projections, are we creating something beautiful together with our computers? 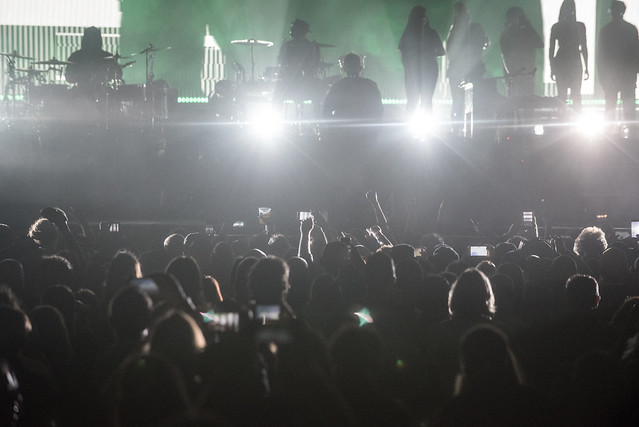 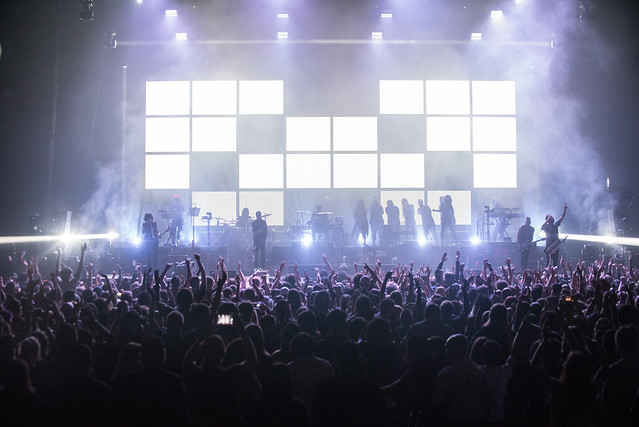 For "Sex Murder Party", Damon dips into the background on the piano. Jamie Principle enters the stage as a whirlwind: a powerful force commanding your attention. He’s accompanied by the beauty that is Zebra Katz, moving seductively across the stage. Katz, you are so beautiful the way you melt down to us with your body moving like a flickering flame. He sings gently to the audience as we put our hands on him. Thank you for a very sincere heart-to-heart moment and I won’t apologize for the caress I lovingly stole from the top of your hand. 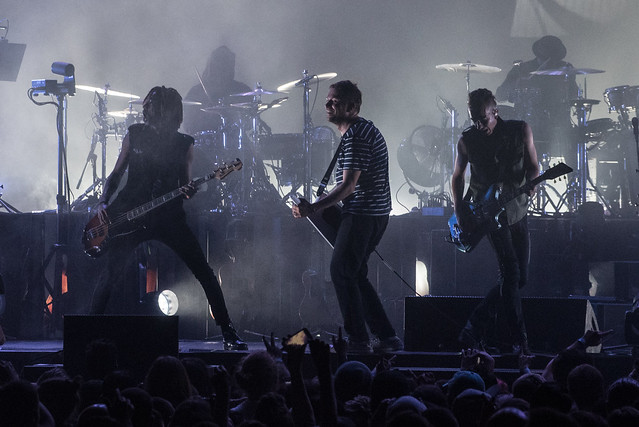 Finally, Albarn descends on the crowd for “Kids with Guns”. He crawls atop the luckiest of audience members and holds the hands of some while staring intensely into the eyes of others as he serenades them. As he is in the palms of our hands and us in his, I come to believe Damon does truly want to connect with his audience. He definitely cares deeply about how his music affects them and has voiced his hopes that Gorillaz's cross-pollination of genres and collaborators will influence a new generation of artists. Even if he is playing with us, it is to challenge us. A moment of intense connection happened when he came down to the front row and sang straight into our faces. He gave me a flashback to the 2016 Savages show at Sasquatch where Jehnny Beth climbed onto the audience and was being held up by her knees as she devoured the crowd with her screams. And as if this connection was a premonition from some collective unconscious, Beth appeared on the stage for the closing song “We Got the Power”. Here she spreads a message of love singing, “We got the power to be loving each other no matter what happens.” As the members of the band began to leave the scene, waving goodbye Jehnny tells the audience, “No one can take this moment away from you.” I just want to take a moment to acknowledge her power and say thank you. She always gives to her audience, whether it’s a whole concert or one song, gathering as much power as she can from them and then relinquishing it entirely back to them. That’s love right there and thank you so much for that Jehnny. 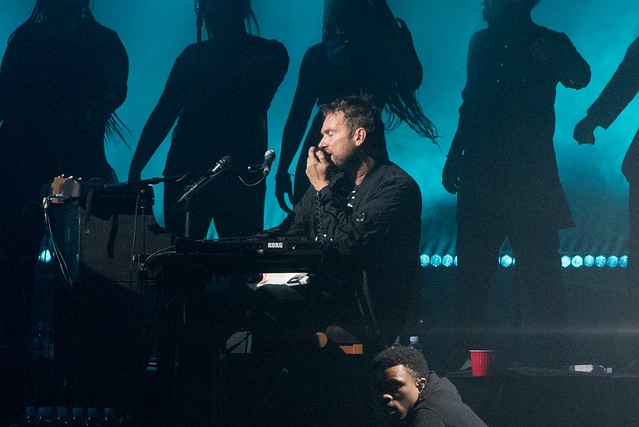 The encore that followed was probably the most human(z) moment in the entire concert. Inspired by a trip to Bruce Willis’s house, Albarn wrote a new song entitled “Idaho” which he gave Seattle the honor of being the city for its live debut. It’s a sentimental song with piano as the main instrument, minimal percussion, slide guitar, and a chorus of vocals. Damon brought out his true self when nearing the end of the song he decided that it hadn’t been played right because the drummer was playing to a click track. “Listen, no no no no no. Shhh! Listen, shush shush shush shush!” Albarn said with frustration, “I'm so sorry about this, let’s just forget about the fucking click right, and just play it?” The guitar began all the way back at the top of the song as the audience cheered. Damon gestured a hand towards us saying, “We just want to get it right for you.” This had me laughing in heartened disbelief. Albarn was laying his heart out on the table and risking it all to bring us his blood through his art. This was the premiere of this song and something drove him to trust us in sharing his vision of a second performance, separated from the constraints of a click track. 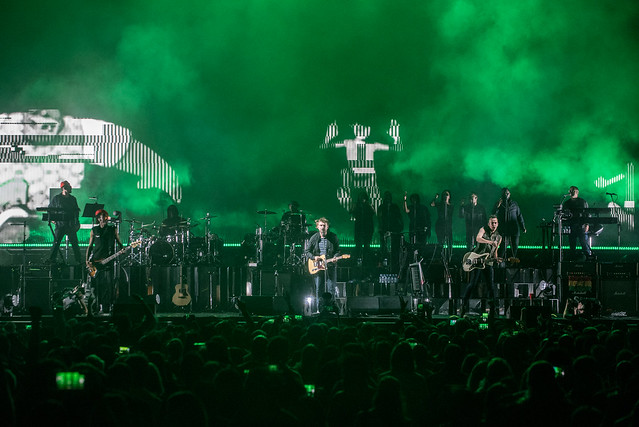 And then with five tight crashes of the cymbal "Clint Eastwood" kicks in and all is lost. We’re not in Idaho anymore. You can’t tell where the music takes you, as half of you is in the concert, half is in a state of bliss, and then you look up and hey, there you are on the screen. It’s all very involving as the implementation of the audience on the big screen makes you feel like you’re part of Albarn and Hewett’s animated stories. Albarn has said, “Everybody on TV’s a fucking zombie…The Gorillaz cartoons seem more real to me than the actual people on TV.” So then does putting audience members dressed in flashing neon clothes up on screen alongside the music video for "Clint Eastwood" make us zombie gorillas, or are we as real as the characters that fight them?

Gorillaz was a challenge, a call to look at ourselves within the context of virtual and physical realities. When they commanded us to create a sea with our phones, was it the glamour of the screen that controlled us or were we controlling our technology as a tool for creation? When Albarn looks out at the crowd, can he see the potential to inspire a collective of individuals, or does he just see a horde of zombies clamoring for the next meal before they’ve digested the last one they had? Which of Albarn’s expressions on stage are true, and which are a product of the Feel Good Inc.? As we hold up our phones to record a moment for the future, will the final persona he presents to us be something for humanity, robots or some sort of evolutionary cyborg? These are all questions that are left without answers, but I find some clarity in a quote from Albarn, “It’s not like I’m stuck in that [digital] world. I enjoy both worlds. I enjoy many words. And I’m equally comfortable in any of them.” 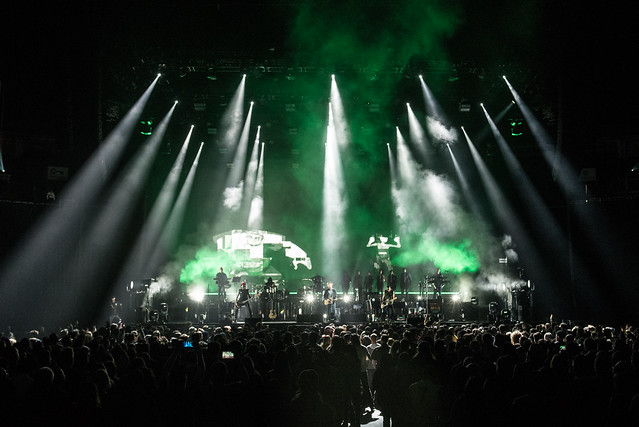