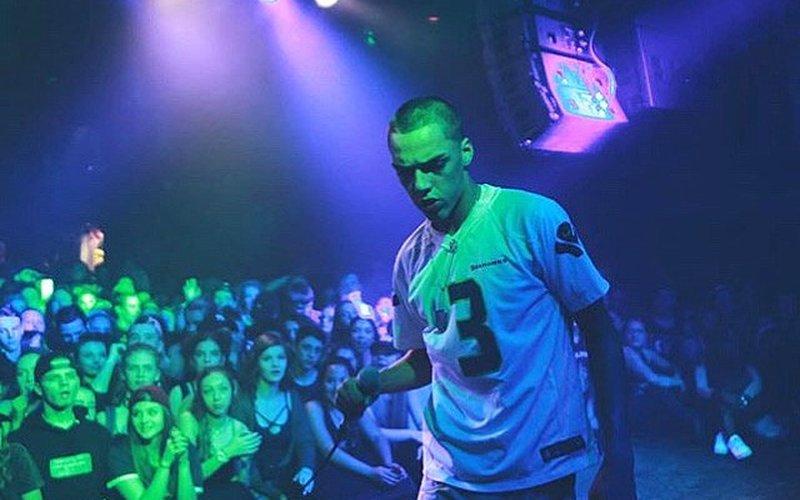 What were you doing your senior year of high school? Were you dropping mixtapes and playing stages to crowds at local music festivals? If yes, chances are you're Koga Shabazz, the moniker of local rapper Angel Cielos, who has had a massive year as he heads into graduation. He started 2017 dropping his first official debut, '17 Bastards, and has gone on to perform in the Sound Off! competition and at this year's Upstream Music Festival. As a native to the Central District, he's a part of the next generation of local hip-hop emerging with a vital perspective on the evolution of the city. We caught up with Cielos about his rapid ascent, the neighborhood he grew up in, and what's next in his emerging career.From what I understand, you’re still in high school but you’ve been making waves in the Seattle scene for at last the last year and already sound like a confident, seasoned MC. When did you start rapping and what drew you to hip-hop in the first place?

The genesis of my musical career was at the Peace Center on 24th and Spring, a positive environment where youth in the Central District could develop their art. The first song I ever recorded was a feature on a track about big girls and how we showed our love for them. I was 10 or 11 years old at the time, but it was a dope experience to feature on a record with older experienced musicians. Since I was an infant I had been listening to guys like Lil Rob, Big Pun, Tego Calderon, Tupac Shakur, etc. with my father in his truck. Inevitably at ridiculously loud volumes, which is where I get that bad habit from. So, it's not a surprise that I grew up adoring hip-hop, because it was like 80% of the music I listened to throughout my childhood. That's changed over time, but as a kid I was a hard core Nas and Gucci Mane fan. I couldn't really separate myself from the genre.

Being from the Central District, have you felt like the neighborhood has influenced you and your art? If so, in what ways?

Probably the biggest lesson the Central District has taught me is that change is inevitable. From people, to attitudes, to the entire neighborhood itself. Because, let's be honest, the Central District doesn't even feel like the CD anymore and it breaks my heart. But, I can always look back on my childhood and reminisce about the hordes of game I've soaked up and the priceless lessons I've learned. In terms of music, I can't really say that I was influenced by anyone from here except Shabazz Palaces and Dave B. Ish is a legend and Dave B is a whole wave himself.

Last year you put out Salad Days The Mixtape, which saw you rapping over beats from legends like J Dilla, The Alchemist, and Knxwledge. Do you ever get intimidated jumping on beats by such renowned artists? What drew you to their sounds?

No, not at all. I believe that if they heard me rapping or worked with me they would see the pure love I have for what I do and how hard I work at it. I use Dilla's beats with the utmost respect, but, if he was able to hear my verses I hope he would appreciate them. I have a very particular taste in production and I always desire a very authentic and original sound. Knxwledge is one of the most inventive producers I've heard. I absolutely love the way he samples, and sometimes it's so left field but that's what makes it better.

On New Year’s Day, you put out your first major project, ’17 Bastards. Alongside the significance of both you and producer Samsara being 17 years old and this being 2017, it seems like there’s a lot of symbolism going on. What was your vision for this project?

The 7 metaphor plays into the most important lesson I've learned this year, The Loop. For every input, there's an output. 7 is the number of completion and the finishing of the project coincidentally fell on the weeks prior to 2017, when we would be completing our final year of high school, consequently opening a new loop. I wanted the project to be somewhat of a teaser for a larger drop, but release dates have been pushed back. I also wanted to build with Samsara, a musically blessed producer and lyricist who has a very similar ear to me, and delivers on that original yet dope sound. He's also one of my best friends.

After dropping ’17 Bastards, you’ve stayed active by dropping one-off singles like “1984”, “Choices”, and “I Been Meanin’”. How do you keep up such a rapid paced output? Any plans for another EP, mixtape, or LP in the future?

The main reason I stay consistent is because I have a home studio where I've been practicing my engineering for about a year now, recording myself and various other Seattle artists. I have about two mixtapes recorded and mixed from home, that will probably never be released. I mostly use it for reference tracks for when I go to the real studio to achieve higher sound quality. But, occasionally I record something really dope so I decide to put it out with my mix on it. This summer I'll be dropping an EP I've been working on for about two years called Overture to the Unknown. I don't have an official release date, but it's going to drop this summer. It features premier Seattle talent and it's the culmination of so much work and dedication, it's beautiful. I'm proud of myself but I'm also sick of listening to it myself so I really want the world to hear it. After that I've got a mixtape or two to drop. I've been working on those simultaneously and they're very polished so be on the look out for those.

Earlier this year you made it to the semi-finals of MoPOP’s SoundOff! Competition. What was the experience like? Have you seen any impact on your career so far?

Sound Off! was a learning experience more than anything. A very valuable experience, though. I try to take every good opportunity the universe sends my way and that was definitely a good opportunity. It got my name out there more in the Seattle music community.

For those who’ve never seen you perform, what can they expect from your set at Block Party at The Station?

It's going to be a unique experience. We're gonna get lit, I might tell a story, I might give you the death stare. If I do it's just because I'm rapping my ass off, and I'm a passionate guy. Most importantly though, we're gonna have fun.

Be sure to catch Koga Shabazz at Block Party at The Station on June 17, at 7:15 PM. This event is FREE and open to the public. Music starts at 12 PM and continues through 8 PM. Droning feedback. Static. The mechanical thrust of distorted, blown out drums. These are the first few sounds you hear on CHARMS’ debut album, Human Error, out June 16 on Killroom Records (which you can stream below). Even before the song descends into a flurry of manic, sharp riffs and guttural ... Seattle hip-hop has always been vital, maybe even underrated, but these day's it's undeniable. As we saw at Upstream this year, it's poised for an overdue breakout. The only issue at this point is being overwhelmed with the sheer volume of artists to parse through. For those ready to fully immers...