"Discovery and exploration" - that's what AEGLive's vice president of Pacific Northwest operations Rob Thomas said was the guiding principle of this year's Bumbershoot bookings. The long-standing festival has held operations at the heart of Seattle for 46 years, always managing to pull in a diverse crowd of all different age groups for a weekend of music where almost anyone can find something to go enjoy. But with Bumbershoot's nonprofit overhead organization One Reel announcing a partnership with AEGLive starting with last year's festival, there was some skepticism about whether or not the eclecticism that has led booking in past years would last. Rest assured, after last year's first attempt at a merger, this year sees some objective success in the "discovery and exploration" department. While the lineup does continue to shift its focus to a younger crowd with EDM acts like Kygo, Halsey, and Porter Robinson dominating the top tier spots, the festival's overall focus maintains an honest appreciation for the rich Seattle heritage at hand. While waiting for bands to finish soundchecks, attendees got to enjoy short clips of footage filmed throughout the years at earlier Bumbershoots, watching their parents or even their grandparents witness all the buzzing fun around Seattle Center. Furthermore, this year's acts have no shortage of Bumbershoot experience. Taylor Hawkins (with Chevy Metal) reminisced about the Foo Fighters' Bumbershoot set at Memorial Stadium in 1997, while Jimmy Carter of the Blind Boys of Alabama expressed excitement to return after the band's last outing in 2003. Meanwhile, there is plenty of new action as well: both Fetty Wap and Tyler, the Creator have made waves in hip-hop in the last few years with radically different approaches to the genre and to individualism in an industry wrought with group-thought. Altogether, Bumbershoot's first Friday in a long time reinvigorated the festival with well-earned nostalgia and an eye on the future.Bumbershoot: 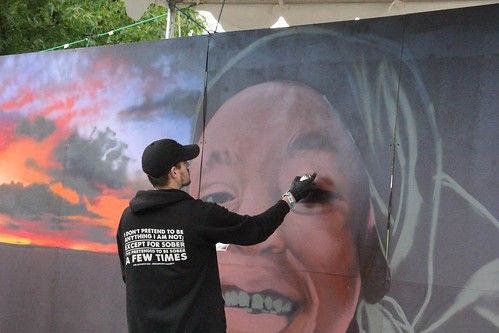 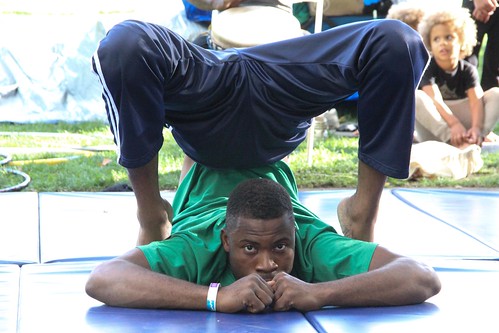 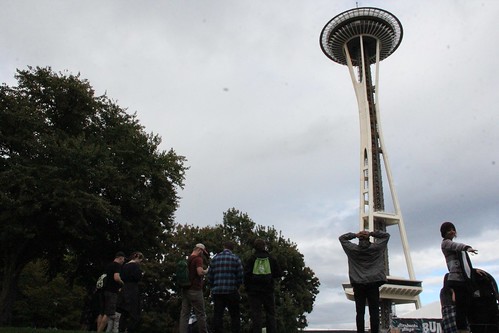 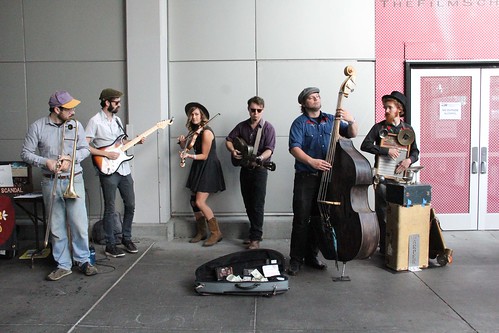 For a (traditionally) family-oriented festival, it's hard to picture a Tyler, the Creator set on the main stage at Bumbershoot without a least a few qualifications. The 25-year old hip-hop pioneer has made massive strides in his seven years on the scene, but not without becoming one of the more divisive acts around. His three subsequent albums Bastard, Goblin, and Wolf form a schizophrenic, psychological crime thriller worthy of a Palahniuk/Tarantino collaboration, while his new album Cherry Bomb breaks the dark narrative cycle to give us a clearer picture of the inspirational young man behind the music, who encourages kids to find their wings and ignore the pervasive temptation to fall for trendiness. Tyler's advice doesn't come without reservation - he maintains a strong understanding of the hyperbolic state of mental health that many young people possess in our post-Internet times. But hey, where there is room to share some mutual feelings of being pissed off, there's always a mosh pit. Taco ascended the DJ stack and queued up a familiar instrumental: the Goldfrapp-sampling Hudson Mohawke/DJDS beat for Kanye West's "Freestyle 4". As the beat exploded and Tyler came blasting onto the stage with his A$AP Rocky collaboration "What The Fuck Right Now", for anyone on the Memorial Stadium floor who was unprepared, this was probably a pretty easy number to relate to. Tyler's set focused on Cherry Bomb and Wolf, focusing on high energy without a whole lot of explanation necessary. It's manic, combustible stuff that demands as much attention as it does a deficit. "Put down your cell phones", Tyler commanded, with pretty impressive response, "I want you guys to be in this, right here". After a crowd noise battle on "Domo 23", Tyler smiled out at the weird nub-shaped crowd packed behind the "totally pointless" VIP section. "Confidence!" he screamed, waving for them to echo back. Tyler's gospel is one that may take some explanation to those whose lives exist completely outside the dark vacuum of the Internet, but it's a strong message of positive individualism for those with context. Tyler's main stage Bumbershoot debut was a riot, and set the party bar high early on in the weekend. 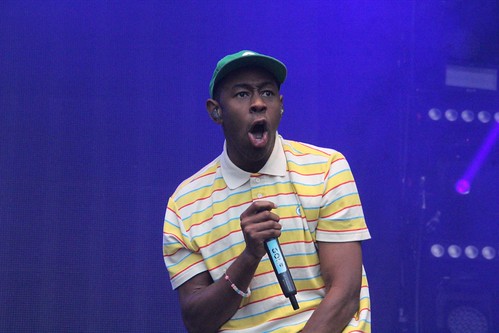 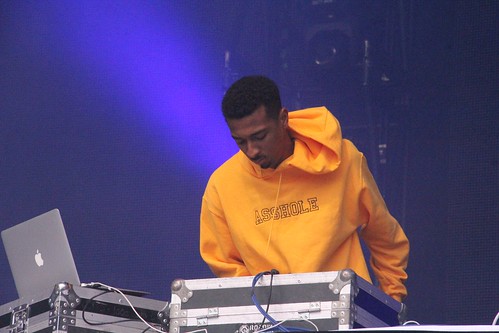 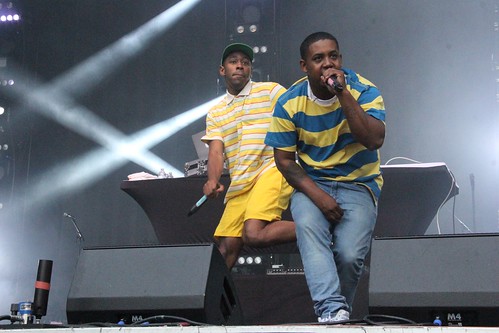 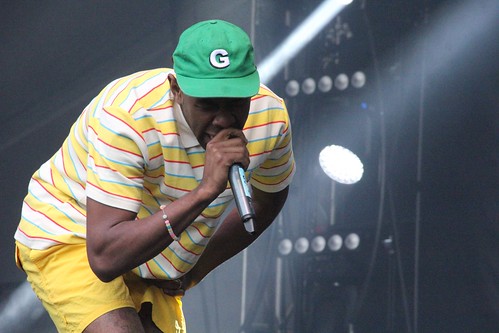 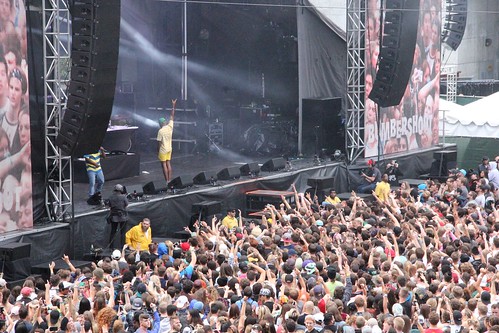 "We are the most overpaid wedding band in the country", Chris Shiflett laughed as Chevy Metal got ready to kick off their set. "We are a cover band", he continued, "and the best part about that is, every song is a good song!". Taylor Hawkins leaned into the microphone. "That doesn't necessarily mean we play them good, it just means they are good tunes." The hilarious thing about this intro is that it comes from two of the best musicians in the business. Chevy Metal is the moonlighting gig from three members of the Foo Fighters, who choose to spend their extra time taking the Fisher Green stage and its equivalents elsewhere to play 10 minute renditions of "My Sharona" and other rock classics. While I'm sure Chevy Metal could have put down 30 tunes in a heartbeat, their short time window made time only for the best of the best. And as the hits continued to pile on, the crowd grew and grew ("Chevy what?"). Shiflett's flippant opening statement aside, it is so much fun to see these classic hits played by some of the best in the business. Watching Hawkins pound through "My Sharona", hearing Shiflett's guitars whine through Sabbath's "Fairies Wear Boots", and hearing the screams for Wiley Hodgen (also of Hawkins' band The Birds of Satan) opening up "Under Pressure" - it's all about as much fun as you'd expect. Furthermore, the mixture of old and new brought a great crowd of all ages to the green for a sparse moment of good weather. All in all, I think its safe to say that Chevy Metal are going to have quite a few wedding gigs lined up after this. 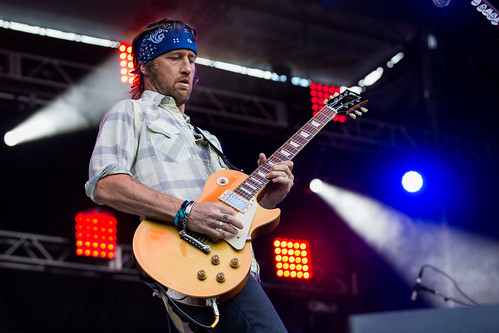 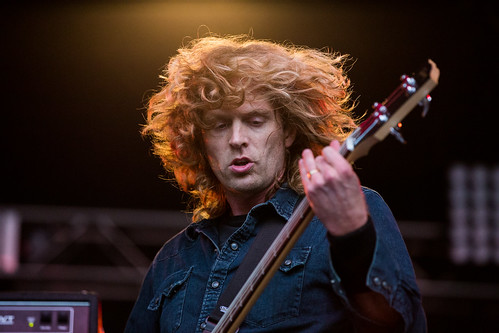 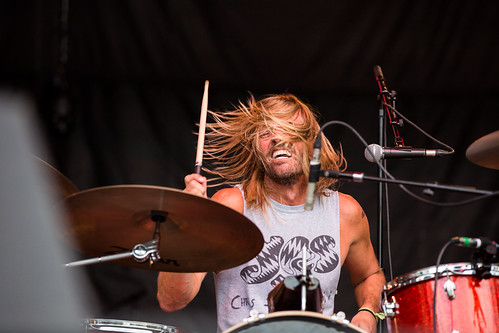 Few artists have impacted pop radio like Fetty Wap has in the past two years. After the Drake-endorsed iLoveMakonnen hit "Tuesday" and Fetty's "Trap Queen" dropped in quick succession almost exactly two years ago, we had two incredibly different visions (Atlanta and New Jersey, respectively) of how melody could be brought back to hip-hop in spastic and flamboyant new ways. Of course, Fetty's rocket to the moon story is maybe the most interesting of them all, seeing "Trap Queen" get followed up by a cornucopia of hits, all thanks to his and fellow Zoogang front-runner Monty's incredible knack for hooks. This Key Arena spot is Fetty's first real performance in Seattle (his only other one was an on-stage cameo at Century Link to do "Trap Queen" with Taylor Swift, because why not), and holy smokes did people show up for it. The Arena was packed to the rafters for Fetty, and the front of the pit especially was nothing but true fans. As his high octane motorbike racing intro came on, the crowd exploded. There were gobs of tears amongst the teens in the front rows (who knew Honda dirt bikes had such an effect?), and plenty were ready to dance all around. Fetty burned through much of his debut album, and even turned things over to Monty for a few tunes as well. By the time the two got to "679" and "Trap Queen", the place was a madhouse. There's a lot of anticipation to see what Fetty Wap brings out next, but not a whole lot of reservation about whether or not he'll bring it with as much energy as he did here. Bringing tons of fun and something new to the rap game, Fetty Wap made his Bumbershoot debut one to remember. 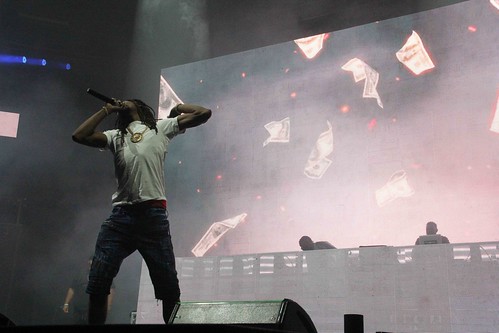 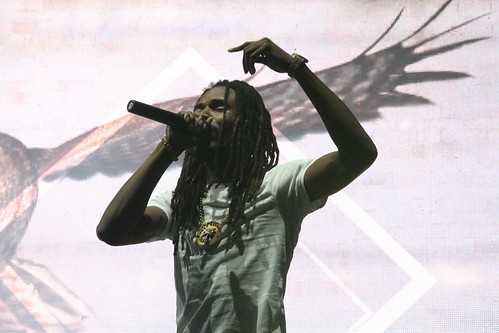 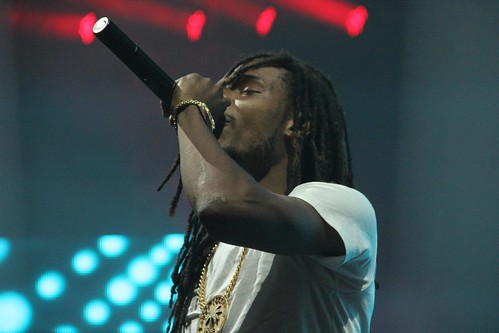 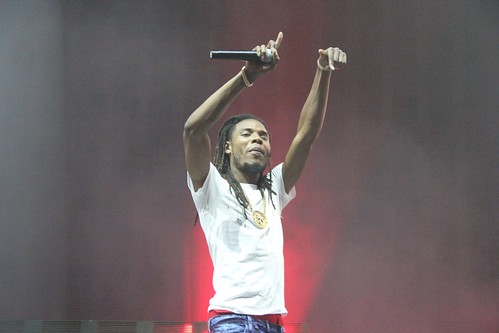 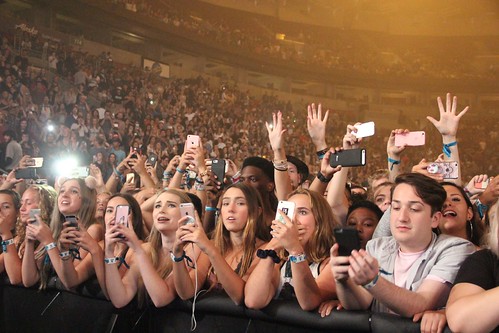 Serving some intense contrast to some of the weekend's breakout headliners first heard in the last few years, the Blind Boys of Alabama have been playing together in different forms and lineups since 1939. While the band has seven decades of touring under their belt, it wasn't until the 2000s when they stacked up no less than six Grammy awards in seven years, all for their incredible gospel music excellence. The band has worked with countless artists, including Michael Franti (to play later this evening), Ben Harper, Tom Waits, and plenty more. And yet, it's not the grandiose nature of their legacy that welcomes in new listeners every year. Rather, it's the truly honest and dear way the band present themselves, without an inkling of braggart nature in them. The boys walk each other onstage with hands on shoulders, taking their seats at the edge of the stage ready to trade off vocals in incredible form and warm the chilly evening with nothing but the strongest affirmation of their joyful songs. Opener of "People Get Ready" allowed the Starbucks stage crowd to truly witness the power that these men bring to their harmonies, letting each cascading voice spill into a lush pool of melodiousness. After this beautiful intro, the band broke into a real toe-tapper with their rendition of "Spirit in the Sky", which won plenty of hooting and hollering from the crowd. Jimmy Carter told the story of how Tyler Perry's Madea films brought "Nobody's Fault But Mine" back to their setlists after some time away (they recorded it back in 2000), before the lovely (and rather hopeful, given the weather) break of "Uncloudy Day". With each subsequent song, the Blind Boys of Alabama brought more warmth and reassurance to our hearts. While, in a lot of ways, Bumbershoot seems to be aiming more and more for on trend artists and audiences caught up in the moment, it's acts like this that remind us what truly magical legacy can do for a festival at the heart of a happy city. The Blind Boys of Alabama brought this love and joy in droves.

The Blind Boys of Alabama: 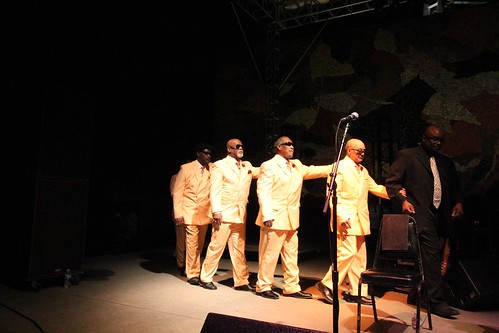 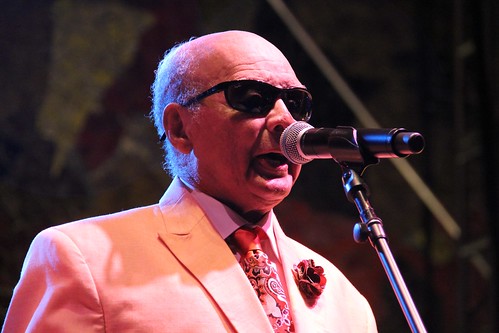 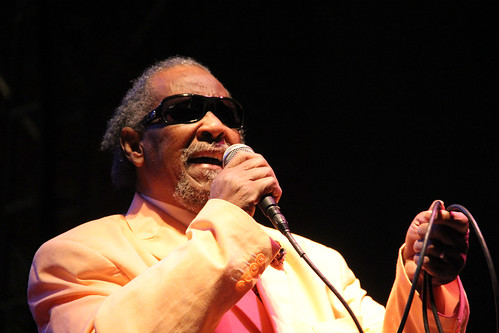 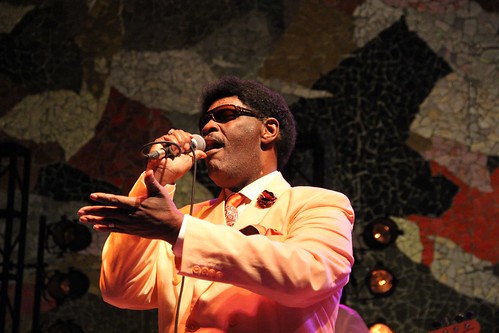 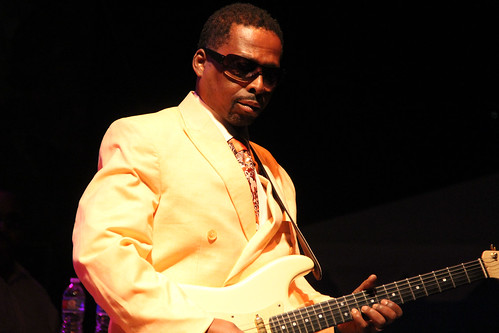 Check back to the KEXP blog for more Bumbershoot action all weekend! 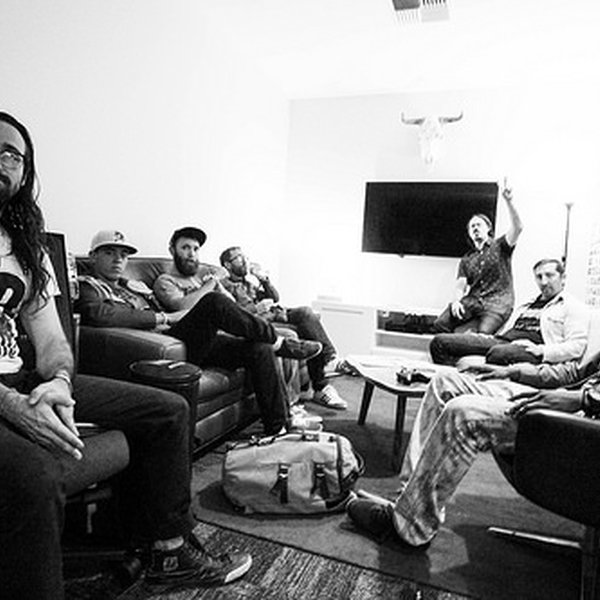 KEXP begins Day 2 of Bumbershoot in-studios at the new home with Black Joe Lewis and his band the Honeybears. The Austin blues singer is three years deep into a cathartic rampage. With the release of Electric Slave in 2013, Lewis shed all extra weight from his warpath. The band name is slimmer, the… 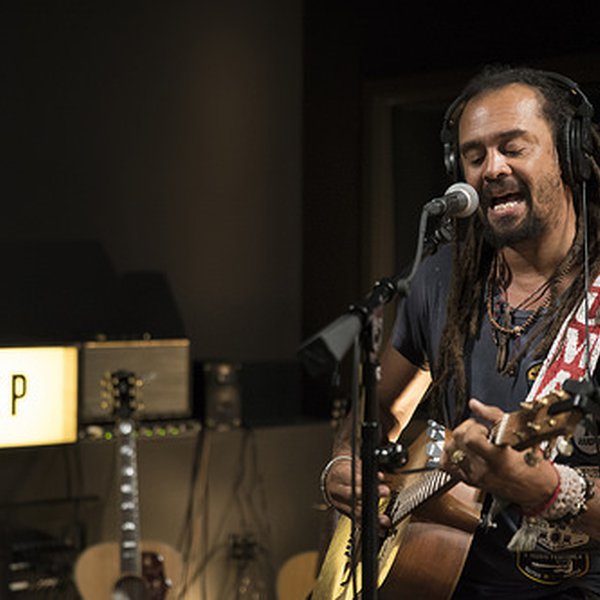 KEXP's stellar lineup at Bumbershoot continues with festival heavy-hitter Michael Franti & Spearhead live on the Secret Stage. Franti has his fingers in many pots. He’s a poet, rapper, and singer-songwriter, who has been spreading positivity all over the world since 1994 with his current projec… 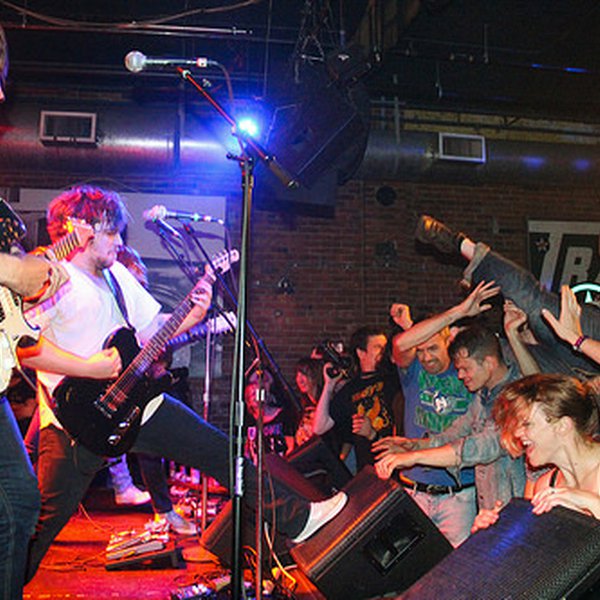 Live Review: Diarrhea Planet with Hounds of the Wild Hunt at Tractor Tavern 8/27/16