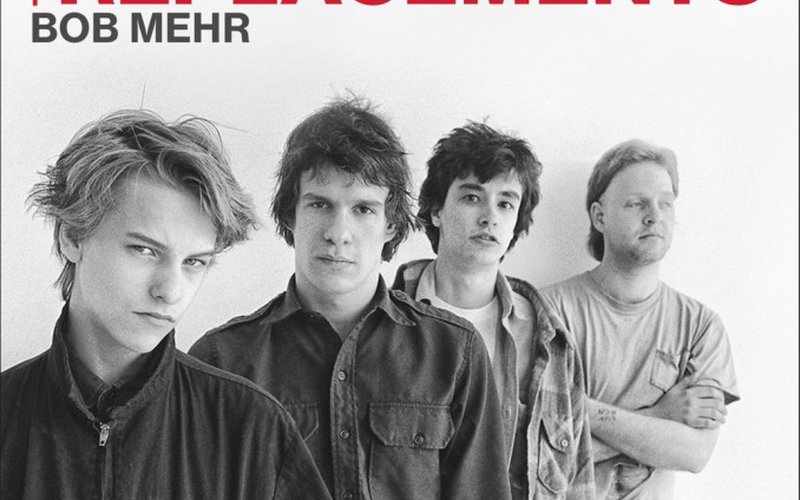 The Replacements may have broken up 25 years ago (and then gotten back together, and broken up again), but their influence grows larger every year. Wilco's Jeff Tweedy once declared that everything his band does is based on The Replacements. Billie Joe Armstrong of Green Day calls them his favorite band of all time. The tragic thing is though, those bands enjoyed a success the likes of which The Replacements never saw in their day. After reading Bob Mehr's definitive book on the band, Trouble Boys: The True Story of the Replacements, you realize: everything about the band was pretty tragic.

Like most people, I discovered The Replacements in the pre-internet days, so this book was a revelation. Mehr spent the past decade passionately researching, reporting, and interviewing hundreds of friends, family, and colleagues of the group. Though the tome is not an "authorized" biography of the band, it was compiled with participation from key members Paul Westerberg and Tommy Stinson, making it the most revealing story of the band you'll find. It's long, clocking in at 435 pages, but it also wastes no time: the book opens with the 1995 funeral of founding member and lead guitarist Bob Stinson.From there, we learn more about the boys and their humble beginnings. At first, I was like, "Why am I reading about how Paul's parents met?," but with every flip of the page, it made more sense. Mehr completely breaks down each member's past, baring the background of how and why they became the destructive band they did. Stinson's mother Anita bravely recounts the horrendous abuse Bob endured from her ex-boyfriend, Nick Griffin. Westerberg's father, Hal, a depressed alcoholic, never saw his son perform, but instead showed his love with small gestures, like getting the guys a touring van (that they promptly destroyed, because, duh, they're The Replacements). From being sent to juvenile hall, losing a friend to suicide, having a brother diagnosed as schizophrenic, and then y'know, the usual teenage bullshit, it's a wonder these guys found each other. Mehr's sensitive re-telling of their childhoods gives you an enormous empathy for their inevitable rock n' roll implosion.

Westerberg's song-writing prowess was undeniably strong, but so was his insecurity. He somehow managed to lead this band of misfits from the Stinson family basement to the stage at First Avenue, from indie label Twin/Tone Records (co-founded by the band's de facto manager Peter Jesperson) to major label Sire Records. But, at every opportunity, they tried to derail their own climb to the top. They intentionally played poorly at shows where record executives would be. Their now-legendary drunken performance on Saturday Night Live in 1986 gained them notoriety and a lifetime ban from the show. They trashed tour buses, hotel rooms, studios, and even a conference room at the University of California at Davis. They routinely defied FCC regulations on the radio. They took every drug available to them, including animal medications. They literally burned money -- like with fire -- despite being in terrible debt, ironically from their own path of destruction.

They fell apart: firing Bob Stinson, who would leave the stage in the middle of a performance to score drugs on the street outside the venue, and then firing Jesperson, the first person to recognize their potential and nurture their career. In 1990, before the All Shook Down tour, Mars threatened to leave after reading an interview where Westerberg called him a bad drummer. Instead, they canned him.

Somehow, Mehr still manages a sympathetic portrayal of Westerberg. As the band's sole songwriter, he alone felt the heat from the major labels who wanted a "hit." After the group disbanded in 1991, he became reclusive, much like the author JD Salinger who Westerberg gave a nod to with his solo debut album 14 Songs (a take on Salinger's Nine Stories). Years later, he still uses indifference as a defense mechanism. Even the name of his most recent project is called The I Don't Cares. But he does care, and I think that's why, after 40 years of The Replacements, we still care, too.

On Wednesday, July 20th, you can find out more about Trouble Boys: the True Story of The Replacements from the author himself, Bob Mehr, and from Twin/Tone co-founder and Replacements manager Peter Jesperson. Join us at the gathering space in KEXP's New Home for an evening of Replacements' reminiscing. There will be a reading, a Q&A with Mehr and Jesperson, and a book signing. Elliott Bay Book Company will be on site to sell copies of the book. And then afterwards, local musicians will take on Replacements songs in an evening of covers from Stag, Prom Queen, and more. This event is FREE and All Ages. Click here for more information.