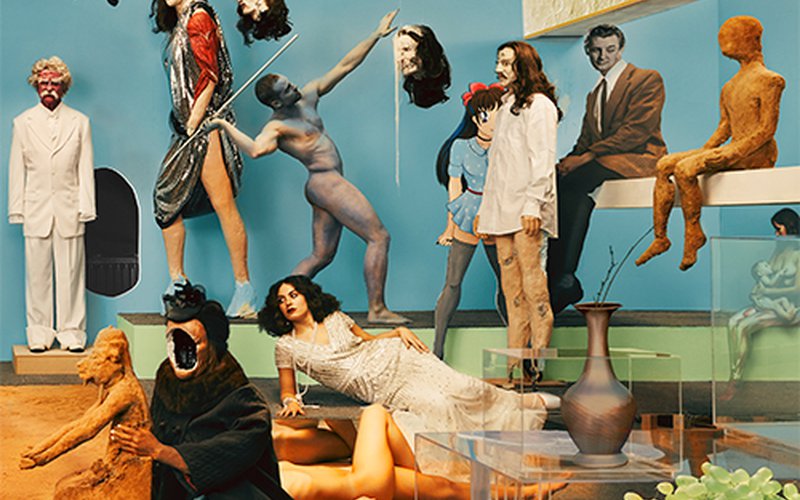 There's a great scene in Richard Linklater's film Boyhood where Mason Jr. (Ellar Coltrane) is about 10 or 11 years old and is in Houston sleeping over at his dad's place when he asks him this great question. "Dad, there's no, like, real magic in the world is there?" Mason Sr. (Ethan Hawke) asks him whether or not the magical creatures of the world like whales count to no effect. "Like right this second", Mason Jr. presses, "there are no elves in the world, right?" Big sigh. "Yes", Mason Sr. responds, slumping over in bed, "technically, no elves". Brooklyn indie rock outfit Yeasayer have always existed under a commonly understood preconception that there is, indeed, magic in the world. Ever since their debut LP, All Hour Cymbals, dropped almost 10 years ago, we were seeing fish begin to fly and living in the future and all sorts of stuff. It's like the band emerged out of some pagan loop in the time-space continuum to spread a crazy religion. That religion gained pop flesh with 2010's incredible Odd Blood, where the abstractions of the first record were tightened and compressed into tangible reality. Then with 2012, they lit their gospel on fire and chased us with it, calling out the misgivings of "Longevity" and reminding us that our understanding of our fragrant world is limited. So what's left in 2016 for a band that still believes in magic? It's tough, because Yeasayer find themselves in an exceedingly lonely crowd, while the cynics and the realists are slowly but surely banging down the door. With new LP Amen & Goodbye, Yeasayer write an album you probably wouldn't have expected from them: one anchored in painstaking reality. While not as immediate as their previous two records, Yeasayer somehow turn the mysticism of their debut on its head for a career-reflecting collection of excellent songs. Amen & Goodbye gives us a dire picture of what's left over after the magic's gone, gracefully done in quintessential Yeasayer style.

The first glance we got into the world of Amen & Goodbye came in the form of the album cover (not hugely surprising in and of itself). Yeasayer worked with Canadian sculptor David Altmejd to create the landscape seen here, and an intense landscape it is. What we get is a colorful mishmash of thousands of years of culture that you could take days upon days to slowly dissect. It's a testament to what forms mythology has taken in our different periods of human existence, from tiny Yeasayer offering up a child to a clay god, or movie stars and anime characters standing next to full body casts from the Mesopotamian era. For some, these figures can become gods, definitive centers of our focus and calling and guides for our future (see: Yeaslayer fandom). For others, they are entertainment, simple pleasures with which to distract from cold reality. In 2016, it feels like we're more saturated with this cornucopia of cultures than ever, with digital history wiping our concept of time and throwing all objects against the same blue sky horizon. In a world like this, with as much distraction as we have, is there really any reason to believe in anything beyond ourselves? Is it worth the effort? Yeasayer capture this struggle on the opening track. "Are we the sons of Seth and the daughters of Cain, preparing for the flood from all the rain? Or are we logos in the neurons of the brain maintaining voltage gradients across a membrane?" Sanctification versus stimulation - which one wins out when the going gets tough? The vocal harmony mimics "Sunrise" before it turns downward, as if the day is coming to a close.

Chris Keating and Anand Wilder both give their principle take on this with the singles. On "I Am Chemistry", Keating breaks down what we have left when all concept of mysticism is removed, boiling his own makeup down to its chemical compounds (when was the last time you saw C4H10FO2P in a pop song?). Suzzy Roche (of the 70s/80s New Jersey folk outfit The Roches) helps out on the vocals in a lovely bridge section, singing about poisonous shrubs before Keating's chorus returns. For Wilder, it's a different kind of chemistry. "Silly Me" is maybe the most straightforward breakup song that Yeasayer has ever put together (not to mention one of the catchiest), but its placement here next to Keating's covalent bonds makes complete sense. After all of our idealism, most of our human insecurities can be boiled down two things: fear of mortality and fear of being alone.

"Half Asleep" is heavily of the All Hour Cymbals sound, with Wilder's haunting mourn of a melody riding atop bustling slide guitar and heavy percussion by Ira Wolf Tuton. But Roche's return presence gives a completely different feel to the Yeasayer landscape. When the final bridge dives in, the song has near-"Henrietta" replay value. Wilder and Roche volley back and forth, wondering how our obsession with adoration begins, causing us to be so narcissistic and inward, despite vast opportunity to embrace relationship. Where is it in our chemistry that our sense of self preservation becomes so singular?

Much like the singles, Keating and Wilder both offer a hypothesis, covering similar terrain with each. Maybe it's man's use of higher calling that makes him so individual, watching out for his own interests in this life and the next. Both "Dead Sea" and "Prophecy Gun" play on this theme from different angles. The former looks to the dead sea scrolls (the predominant source of modern biblical scriptures) as a power surge, a hidden text kept from the people to gain control. After all, we have so many historical examples of this type of exclusive access throughout history. On the other hand, "Prophecy Gun" takes the heavy weight of this power onto its shoulders. "The sky is falling into the world to come", Wilder sings over a growing swell of sound, "Abraham's Bosom can't include everyone". The song moves closer and closer to a grandiose coda and then promptly fades out, leaving you with a bit of a sinking feeling. Maybe that exclusivity isn't so fulfilling after all. In fact, it's so unfulfilling that even the image-bearers start to lose their shine on "Divine Simulacrum". This creeping song of haunted love song is one of the best grooves of the bunch, harking to the bass-heavy lurching of Fragrant World before the "Devil and the Deed" harpsichord returns on the meta interlude "Child Prodigy". Our collective sense of wonder is waning.

So what are we left to do in the wake of failing health, lost love, and underwhelming higher calling? Well, for Yeasayer, it's what they see outside: cynics and realists banging down the door, fearing that there is still something left of the unknown. The Keating-led "Gerson's Whistle" throws back benzos and waits for things to change and justifies misunderstanding with insanity. Much like "Half Asleep" before it, the track builds to a crescendo of fluttering vocals and guitars and ends on a high note that you could listen to for an hour at a time. Meanwhile, Wilder's "Uma" is a simple love song of the saddest variety, where insecurity overtakes all semblance of perspective. "Let out a little sigh to let me know your mine", he worries, dwelling on all the things he can't control.

The album closes with "Cold Night", easily the simplest song of the bunch, and quite possibly the best. Here, all of the frills are stripped back, as Wilder sings atop a true three-piece setup of drum, bass, and guitar (somewhat of an oddity for some of Brooklyn's more adventurous sonic pioneers). Here, Wilder tells a very sad story that you can really only speculate on, but the result is essentially that a friend or a lover has walked out of the frame and left a bitter taste behind. "Was there nothing sacred you could hold on to and carry you through the cold night?", Wilder mourns", "That's no way to make yourself heard". A far cry from the sparkling infatuations of "I Remember", "Cold Night" is love seen through a very cold lens, devoid of magic, devoid of naivety, wishing time and circumstance could have led to a different place. Yeasayer's choice in ending this record as such is interesting, considering they've always placed such an importance on the unattainable. Maybe the "goodbye" of the album's title is a farewell to innocence - a concept that hardly anyone can still possess in our cesspool melting pot of cultures piled atop anyone who enters the fray. If it means something more for the band, well, maybe this means they have come full circle in the way they see the world, working their way through the fantasies of modern living, knocking them down one by one until there's nothing left. Regardless, the message captured in Yeasayer's fourth outing are an undeniably powerful siren song for our modern love. Maybe we've placed too much value on understanding the unknown. Maybe it's time for us to be content with what little mystery we have left. After all, the clock is always ticking.

Amen & Goodbye is out this week on Mute Records. Grab it at your local record store on CD or vinyl. Yeasayer will tour extensively in support of the new album, including a stop at this year's Sasquatch! Music Festival. See a full list of dates at their website. 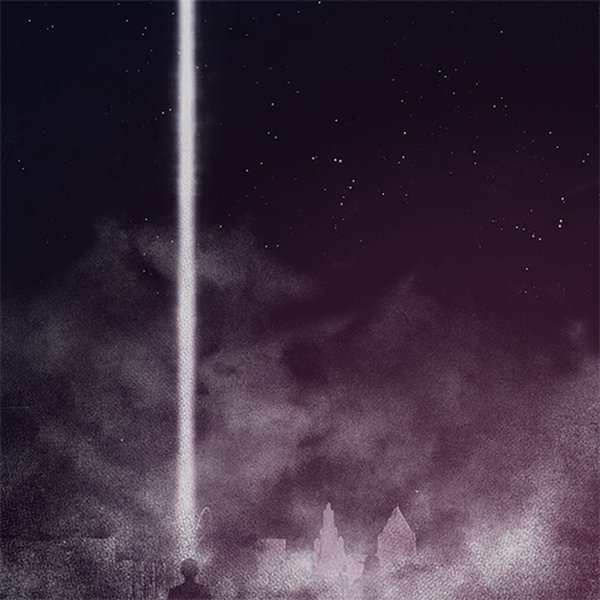 If the Internet age is defined by one thing, it's probably disposability: the temporal state of everything we define ourselves by. We live in a world that is exponentially unsatisfied with singularity and smallness. Our good intentions for globalization and interconnectedness have gone by the waysi…