The final day of Bumbershoot 2015 finally saw sunshine and good weather all around. Maybe the crowds could sneak in one more summer festival after all, after the torrential rains that started the whole thing off. The lineup for this day included another solid dose of excellent local bands, like Sisters, Bread & Butter, and Hey Marseilles. The latter got to perform on the larger Mural Stage, not relegated to the  hard to find no man's land of the Broad Street stage. Before the indie chamber pop group took the stage, the house sound was blaring "The Hills" by Saturday headliner The Weeknd. This was not the first time the house song choices seemed a bit out of place. Sure, this was an artist that had played the festival. But did the crowd gathered for Hey Marseilles' earnest and heartfelt set want to be blasted with heavy beats and lyrics like, "I just fucked two bitches 'fore I saw you"? The band actually sounded quiet compared to this loud track that preceded them. It was an odd juxtaposition, and one more small piece of evidence that the festival, under new management of AEG, is working to find its center and its core audience. On the other hand, it is also possible that the band requested this music be played as they walked out on stage.

In any case, Hey Marseilles drew quite an impressive audience. In fact, it was probably the largest daytime crowd seen at the Mural Stage all weekend. Hey Marseilles has clearly garnered quite a following, and rightly so. Their melancholy, wistful sound has evolved somewhat, and the set took on a poppier, dancier tone at times. Singer Matt Bishop's voice has a Ben Gibbard-like quality at times, and the band continues that northwest tradition of sweepingly emotive songs. The group has a new album set to come out some time this year, their third full length. Some of the newer material had a more optimistic, forward facing feel, with lyrics like "leave what we know, find what we're after." This contrasts with some of the older, more morose break up ballads like "Heart Beats", where Bishop sings "I still believe you love me, but in a different way." The set featured some beautiful interplay between viola and cello, which is part of what makes the band's sound unique. And the slower ballads built towards more bouncy beats and rock energy. Hey Marseilles is sounding stronger all the time.

Meanwhile, over on the aforementioned Broad Street stage, local blues rock duo The Grizzled Mighty were tearing through a short set of power chords, killer solos, wild drum beats, and plenty of on stage antics. Their latest album, Closed Knuckle Jaw, lives up to its name sake with fiery riffs that land like blows to the face. Singer and guitar player Ryan Granger took on a new drummer for the album. Lupe Flores (who also plays in the metal duo Tacos!) is a lot of fun to watch live, hammering away behind her kit and clearly having a lot of fun. She and Granger have similar long, curly brown hair that they tend to flail around while head banging in unison. Granger jumped high in the air with his guitar, while Flores stood at times behind the drums, bringing a larger than life theatricality to the set. You might not think it would be so entertaining to watch just two people making music, but they certainly held the crowd's attention as they ripped seamlessly from one rocker to the next. The duo easily shifts tempos, moving in lock step through their songs' twists and turns. Towards the end of the set, Granger jumped into the crowd with his guitar to solo for a bit, then leapt back on stage to perch atop Flores' kick drum, even using the drums as a slide for his guitar. It was a bad ass twisted side show of a set. A drink-party-fight kind of show. If you haven't seen these guys do their thing live, do yourself a favor. They are not to be missed.

Key Arena continued to host bass heavy electronic groups throughout the weekend. One of the more interesting acts to grace the massive stage on Monday was Canadian born, Berlin based singer and producer Peaches. Things had gone a bit quiet since the release of her 2009 album I Feel Cream, but she has embarked upon a major tour in support of her forthcoming release RUB, due out soon. Peaches has always played with the profane, challenging traditional morals and gender norms. While she could be viewed somewhat as a dirtier Robyn or Lady Gaga, and indeed does share some similarities with both artists, Peaches is certainly her own woman, and brought quite a creative and confident flair. She plays all the instruments on her tracks, and played the role of her own DJ on stage. This meant there was just one woman facing down thousands of fans. But she is clearly fearless, stripping out of a body suit to reveal a skimpy one-piece underneath, and spraying the crowd from champagne bottles held between her thighs. She made use of the whole stage, and amped the dancing audience into a frenzy. The floor was packed fairly full, maybe 80% or so, but the stands were almost entirely empty. Still, energy in the arena was high. She closed out her set with her biggest hit, "Fuck The Pain Away", off her 2000 album The Teaches of Peaches. As the song ended, she thanked the crowd graciously. A middle aged security gaurd at the back of the stands shouted out, "boo! We want you to leave!" Then, seeing she had been heard, the guard quickly added, "I'm sorry, I've never heard anything so vile in my life." Clearly, Peaches had been successful with her tongue in cheek(s), filthy fun.

Boise, Idaho, indie rock stalwarts Built to Spill have been on a roll this year, touring behind their eighth studio album, Untethered Moon, which came out in April. It was the band's first release in nearly six years, and one of their most solid in a long time.  Guitar player and singer Doug Martsch, the band's only permanent member, is famously subdued on stage, and rarely does much talking at all. This show was no exception, with Martsch only very occasionally pausing to say a terse "thanks." Instead, he let his guitar do the talking, and, along with two other guitars on stage, the music wailed. Built to Spill are one of the most jam-friendly indie rock bands, unafraid of taking long instrumental interludes before Martsch's high, nasal voice returns. A new single, "Living Zoo" was a lot of fun to see performed live, as the five piece band sped up the tempo in unison and kept things tight though the songs' many twists and turns. They played Seattle not long ago, performing on Capitol Hill Block Party's main stage in July. But judging by the sizeable crowd for their Mural Stage show at Bumbershoot, Seattle was already wanting more.

Bumbershoot has a fairly longstanding tradition of getting bands back together, or snagging some legacy acts on a reunion or anniversary tour. This year, Ben Harper & The Innocent Criminals was one of the bands to fill that role. The group disbanded in 2008, but came together for a run of shows earlier this spring. They must have enjoyed the reunion, because they soon embarked upon a major North American tour. It's been 20 years since the release of Harper's breakthrough second album, Fight For Your Mind, and these songs remain among his most popular. The set included plenty of early material, like the preachy "Don't Take That Attitude To Your Grave" form his debut album, and the ever popular "Burn One Down". For stoners of a certain age, that song remains an anthem. The crowd cheered loudly as soon as the djembe began, many taking the opportunity to celebrate Washington's legalization of the song's subject matter. Although public marijuana use is not legal in Washington, there seemed to be little enforcement throughout the festival weekend. Early on, Harper's songs stayed mainly in the folk tinged with a bit of reggae and soul realm. But as the set developed, Harper traded his acoustic for an electric, and then a lap steel guitar, and the rock energy intensified. His banter was warm, funny, and very appreciative of the audience. He talked several times to the crowd as if they were old friends who have come a long way together. And in some sense, he was right. This was a fun, feel good, nostalgia soaked set. And for many, it was a great way to cap off the weekend. 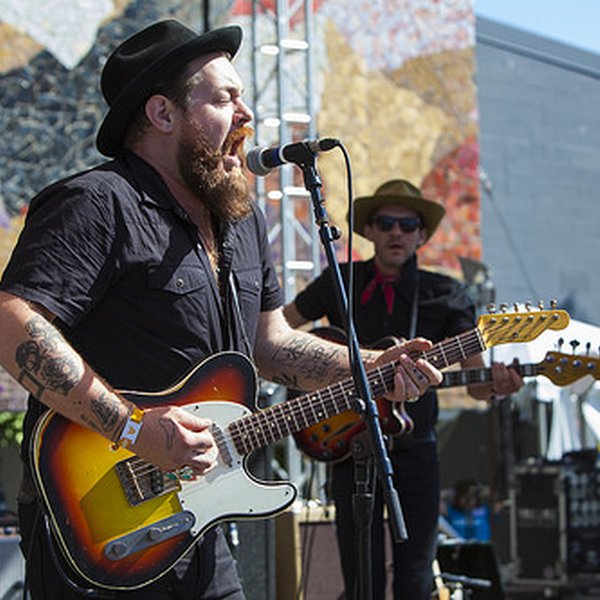 Bumbershoot 2015, Day 3: Nathaniel Rateliffe and the Night Sweats, Minus The Bear, DeVotchKa

There's probably a joke somewhere in the fact that Nathaniel Rateliff and the Night Sweats played a rousing workout of a show on Bumbershoot's first (and, in quintessential Seattle fashion, only) warm afternoon, but it wouldn't illustrate the Denver, Colorado-singer's performance any better than s… 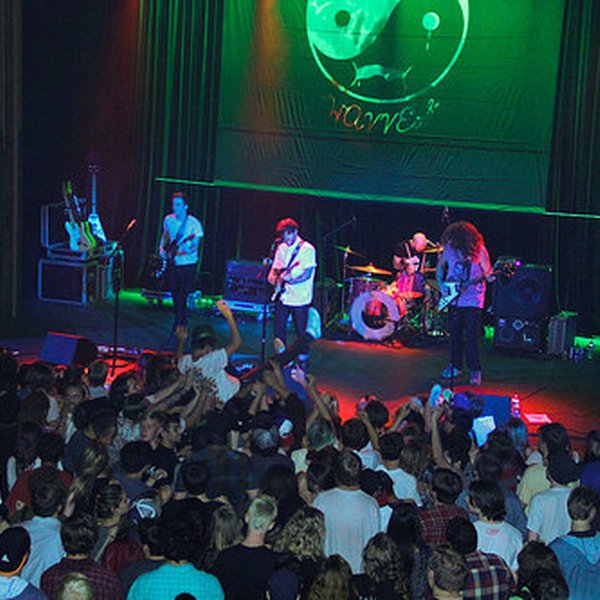 On October 2nd, Nathan Williams will release V, his fifth full-length effort as Wavves. Five albums deep, Williams finds himself at a bit of a crossroads. His 2013 record, Afraid of Heights, found him on a major label for the first time ever, writing bigger hooks, better sing-a-longs, and cutting t… 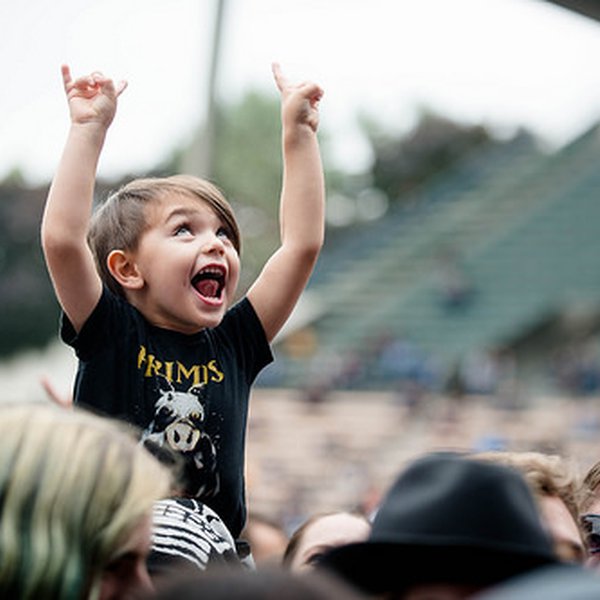 The weather was still shades of gray on Sunday, but overall promised to cooperate a bit more than the deluge of Saturday. The second day of Bumbershoot kicked off with the big, warm country rock sounds of Israel Nash. Nash plays very much in the tradition of Neil Young, and marries swelling rock wi…