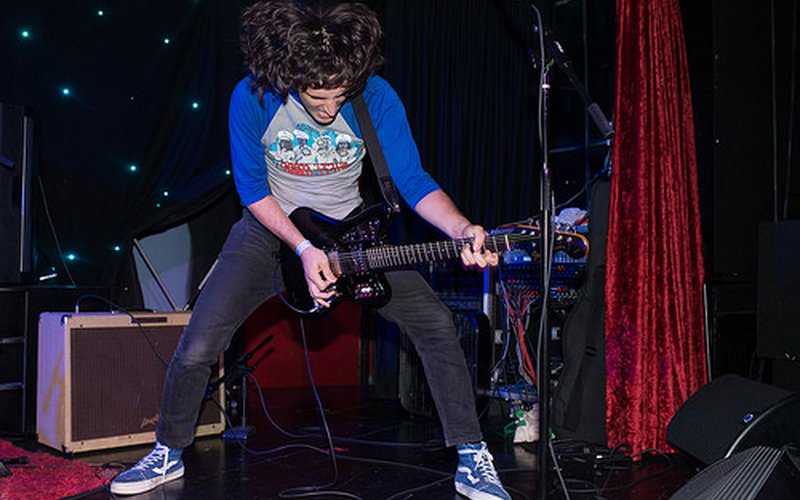 Mean Jeans guitarist and vocalist Billy Jeans (Christian Blunda) took the stage for his second set of the night (he also performed in openers Patsy’s Rats). He was joined by Jeans Wilder (Andrew Bassett) on drums, and Jr. Jeans (Richard Messina) on bass. It was late, but the crowd at Chop Suey wasn't slowing down, and people were ready to mosh. What followed was an explosive, hilarious set of Ramones-esque punk from three stoners looking for a party. Although the genre "stoner punk" exists, with its heavier, distorted feel and mostly slower tempos, Mean Jeans couldn't be more different. They're definitely stoners, but they're totally high key, whipping around the stage and screaming like teenagers in their parents' garage. Hair-whipping was in full effect, and songs like “Lets Pogo B4 U Gogo,” "R U Mentos," and "Party Animal" kept the pizza party going. At one point, Jr. Jeans held up his bass for Jeans Wilder to play with his sticks. "Anybody Out There," from their 2012 record On Mars, was action-packed with light hearted, playful riffs and sing-along lyrics. The killer combination of "Slime Time" and "Steve Don't Party No More" inspired stage diving, and everything from beer cans to someone's glasses went flying. It was the perfect continuation of the spirit of Pizza Fest, a three day punk festival celebrating the cheesy treat. 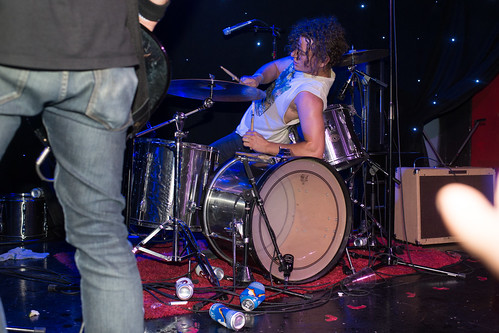 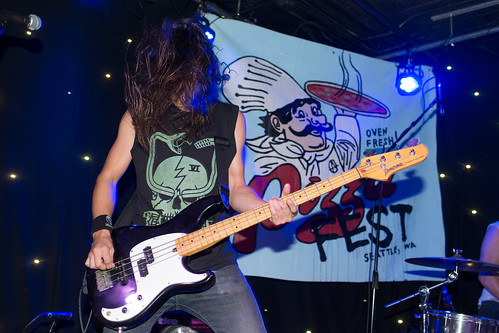 Wicked Pies was slangin' pizza outside Friday and Saturday, keeping the slices coming for hungry band and audience members alike. I caught festival organizers Elaine Grabicki, Pete Capponi, and Jen Knight sneaking some before the show! They worked tirelessly to make the event successful, with Capponi even running onstage a few times to adjust drums (his instrument of choice). It's great to see a pack of pizza lovers so dedicated to the cause. 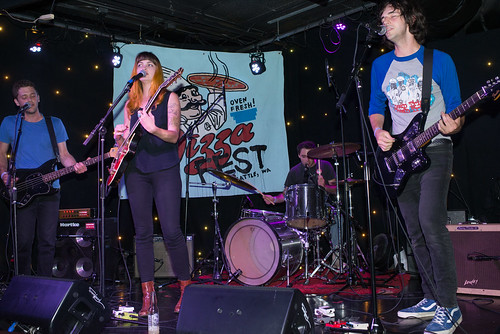 Portland band Patsy's Rats opened, sounding like a cleaner, sunny Rancid with female vocals. They were late setting up due to a car being towed in Vancouver, B.C., but they still played a great set. "Rock & Roll Friend" got the early birds grooving. Los Angeles band Susan, an all-lady three-piece clad in white button downs and blue cravats, shared their sweet surf harmonies. Big things are coming their way, with a cassette to be released on Burger Records this fall. 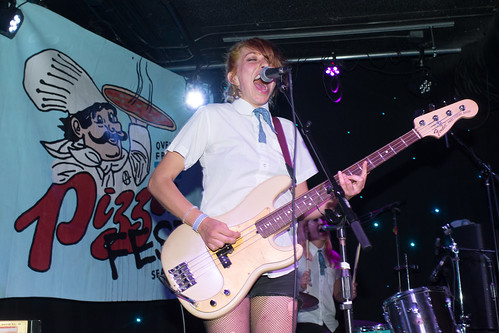 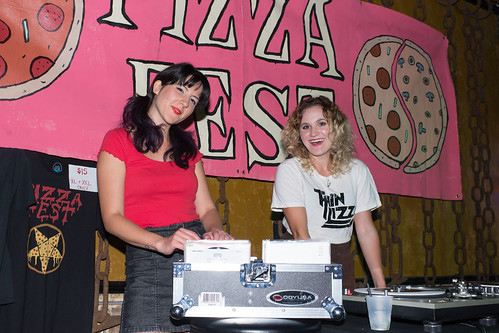 In Chop Suey's side bar, The Den, DJ Some Girls and DJ Burnt Zza held it down between sets. It was the perfect space for taking breaks and chatting with friends, before clambering back to the front for the next set. There was an impressive spread of merch, with options ranging from beer koozies to pins to shirts emblazoned with pizza pentagrams and pizza Illuminati triangles. This festival has its logos on lock. 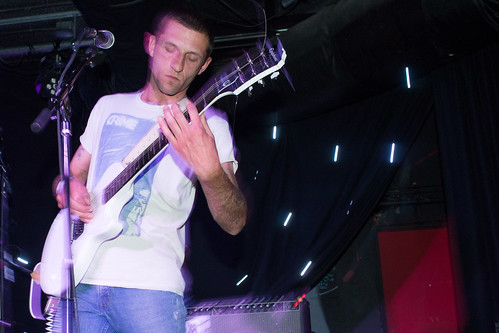 San Francisco's Scraper bathed the crowd in a wash of punk fuzz and singer Billy Schmidt's crackling, sandpaper voice. "Lick Me" was a fun, rolling song with vaguely nasty lyrics, telling the listener, "Lick me, don't love me." The beat and bass plodded along, guitar dancing over the top à la Parquet Courts. The only downside to their set was the smaller crowd, which made it open enough that people weren't really dancing. I could see people losing themselves in a true mosh pit to Scraper. 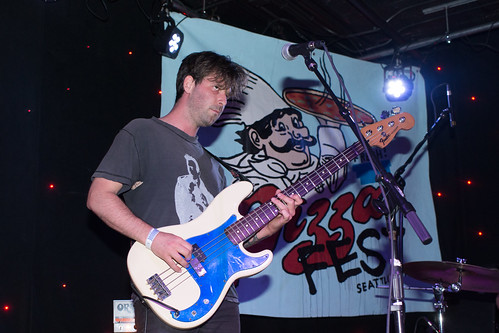 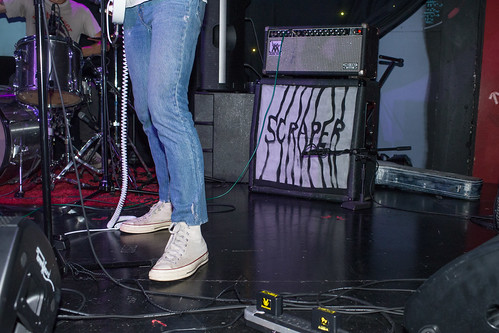 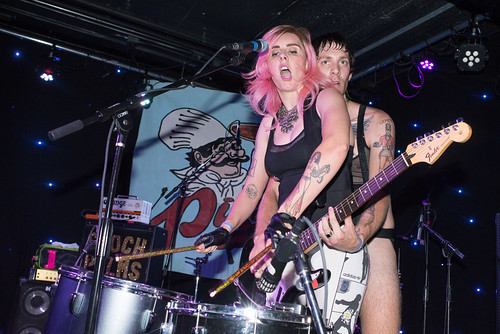 Garage punk band The Gooch Palms are a visual spectacle from Newcastle, Australia. They emerged, clad in exercise spandex, crop tops, and leotards, with brightly colored dyed hair and big gaudy jewelry. Singer/guitarist Leroy Macqueen had such a funny stage presence, smiling constantly, flirting with the crowd, and speaking with an endearing and cheeky accent. At one point, he told everyone how he was choosing who he'd like to go home with that night, and how it would be both boys and girls, but only "butt-stuff." The crowd was beside itself as he continued on, never breaking character. His counterpart Kat Friend was equally magnificent, drumming standing up and singing, dancing and whipping her hair. At one point, Macqueen took off his leotard to reveal a zip-front thong, which he promptly pulled aside to reveal one hairy ball. He looked shy for a moment, telling the crowd, "I haven't been able to shave yet on tour. I'm usually a lot cuter down there." He did a bashful 360 turn, revealing to everyone that the thong was backless, one of those where the straps are around the waist and the outer edges of the butt cheeks. 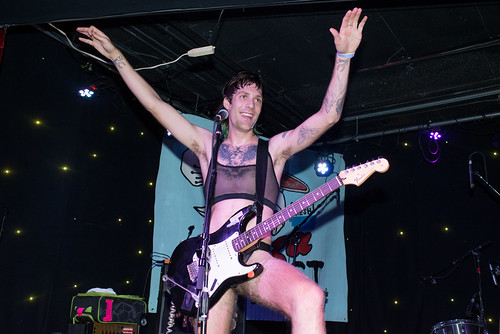 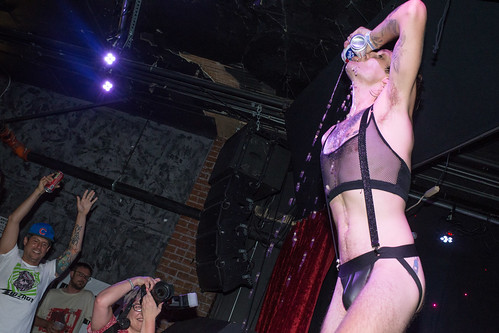 When the crowd kept laughing at his antics, he faked seriousness and asked, "What's so funny about what I'm doing?" It only made the crowd laugh harder.  "We Get By" was a blast, an anthemic, catchy dance tune, and the opening track of their first album, Novo's, from 2013. "Trackside Daze," their most recent single on a 7" from January, is the perfect garage jangle, upbeat and poppy, with distant reflections of The Ramones. The sweetest part of the set was when a man in the front row yelled out something in an obviously Australian accent, and Friend responded with the utmost excitement, "What the fuck did you just say? Are you a Novocastrian?" The man and his girlfriend were indeed from the land down under. 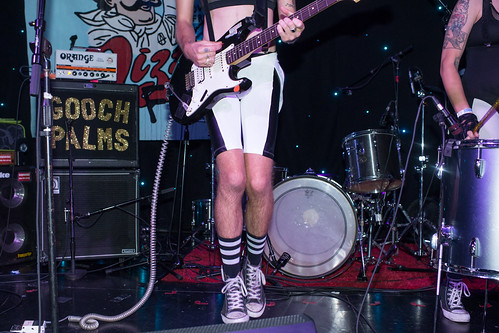 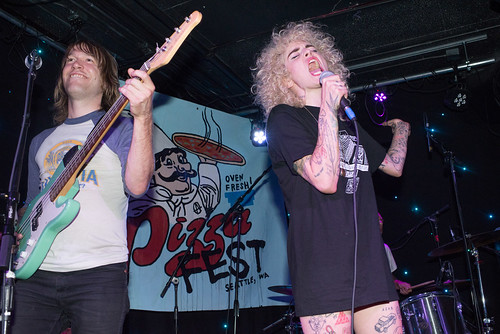 Pop rock warblers Gazebos were a delightful blend of synths, dreamy guitar, and Shannon Perry's unique vocals. Her voice ranged from soft and rhythmic to an aggressive, hyper shriek, and it was captivating. She's said in interviews about this new project that she enjoys focusing solely on singing, because it frees her up to jump around and go nuts. She did just that, taking off her shoes and flailing her arms, leaning into her band mates and screaming. Her dance moves were hypnotic - she sneered and waved her arms, rolling her eyes back as she gesticulated along with her lyrics. Not only were they aurally fascinating, but they were visually stunning as well. Perry is covered head to toe in tattoos - many her own, as the owner of Valentine's Tattoo Co. in Capitol Hill. 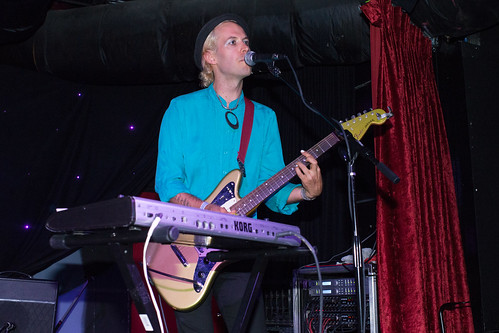 Guitarist TV Coahran, bassist Shane Herrell, and drummer Jordan T. Adams lent their own charm to the ensemble. Coahran was glammed out with a single bedazzled earring and large circular pendant necklace, Herrell kept it casual in the all-American jeans and a baseball tee, and Adams was all smiles as he pointed his sticks at his band mates and rocked a rhinestone tie. Gazebos only just formed last year, playing their first show at Vibrations 2014, Cairo's summer festival. They have garnered a lot of attention, with members hailing from bands as diverse as Butts, The Intelligence, Bread & Butter, and Spurm. They don't have any recorded material released yet, but you can check out their music here. 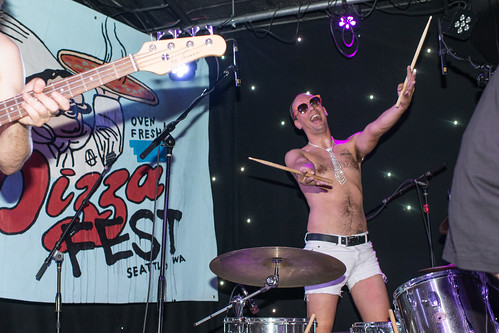 Perry's lyrics often deal with the trials and tribulations of being a woman, and the oxymoronic standards women are held to by society. The band did a cover of the character Rizzo's song from the Grease soundtrack, “There Are Worse Things I Could Do," and Perry's love of the song was infectious (she has Rizzo's name tattooed on her neck). Before their song, "I Don't Wanna Be Here," Perry said, "This song is about being a woman. So it's about being angry." It started quickly with Coahran's guitar, and as the drums and bass kicked in, Perry revved up. After a few short lines, she started to raise her voice, growing more and more agitated as the song continued. The band increased in power, backing her as she soared. By the end, Coahran whipped onto his synth, a frustrated, fried and piece-y melody emerging and sizzling over the track. The band sang the title words as Perry screamed, and the song ended as abruptly as it had started, leaving crowd members exhilarated. 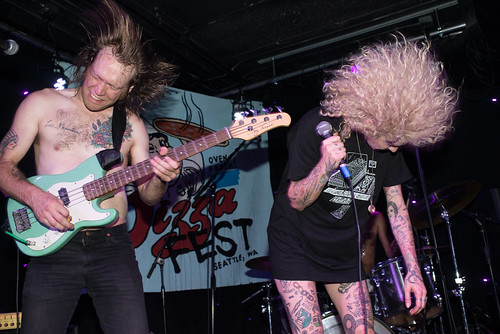 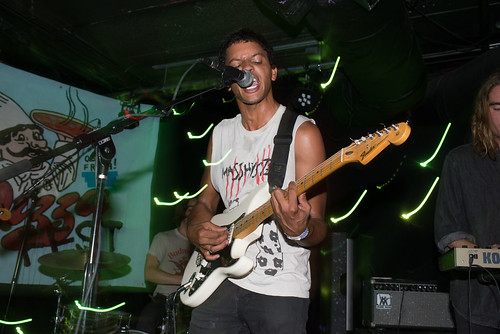 Useless Eaters played on a dark stage, dropping the crowd into sudden anonymity. It seemed to help people loosen up a bit, as there hadn't been much dancing yet. Currently on tour (and sharing a drummer) with Scraper, the band is from Memphis, TN and based out of San Francisco. Stark and sharp around the edges, frontman Seth Sutton's guitar compositions burned through the darkness, engaging every ear within hearing distance. Bassist Brendan Hagarty womped on his strings hard enough to shake the bass back and forth, rocking on the spot to the beat. One of the more introspective sets of the night, Useless Eaters rounded out the lineup nicely, prepping the crowd for Mean Jeans' imminent arrival. Night two was almost over, with only one night left in Pizza Fest. 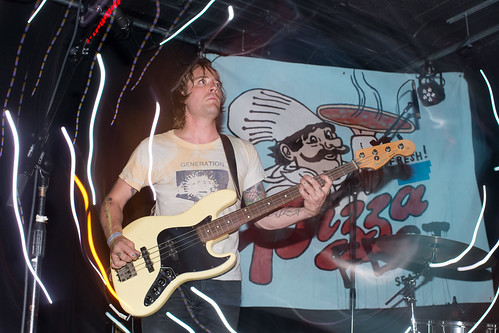 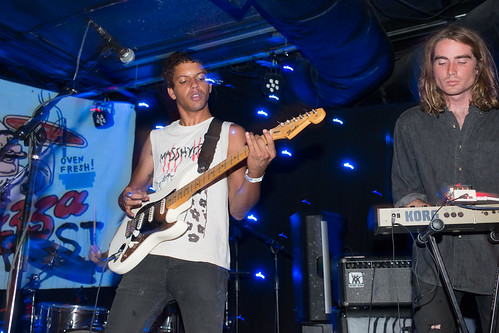 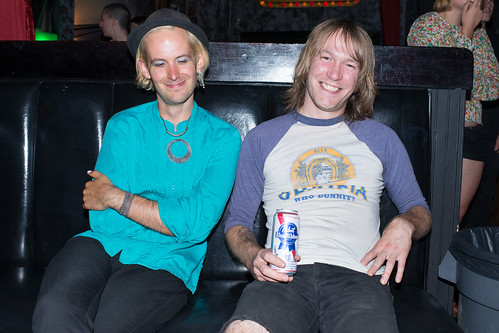 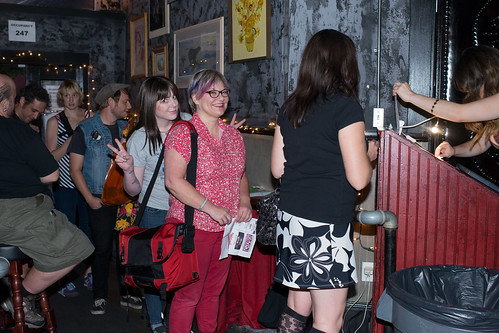 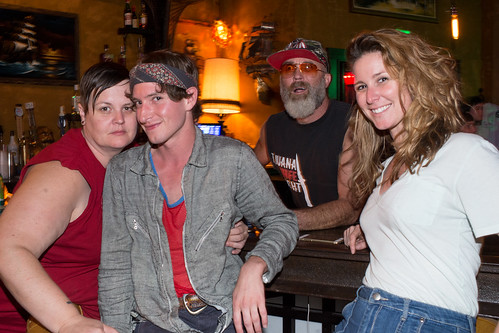 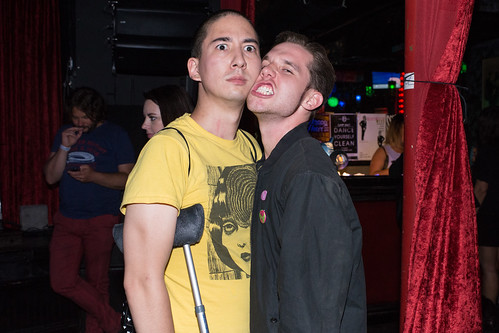 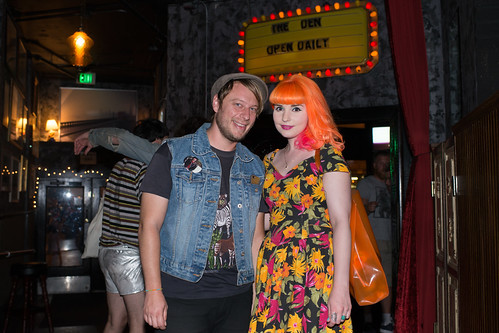 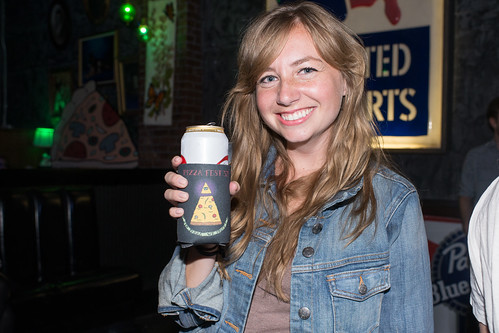 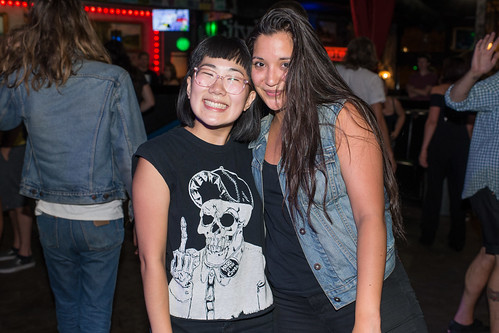 Check out the rest of the photos from night two here. "We're gonna play 'til they kick us out." Nobunny spoke to the crowd at El Corazon Saturday night, clad in a bunny mask and black briefs with a white poof tail. "Nevermind, they already locked the doors. None of us are getting out alive. This is it. Welcome to Hell, this goes on for your life." If …

Soak up some serious summer vibes this weekend by checking out Cairo's VIBRATIONS, an annual community focused arts and music festival. The festival takes place at Volunteer Park this Sunday, August 16th! The music headliner is local favorite Chastity Belt; others on the lineup include So Pitted, i…

With a brimming abundance of food, art, and music festivals this year, summer in the PNW has never been better. Now adding to that is the fifth annual VanFest, taking place this Saturday, August 15th in Maple Valley, WA. 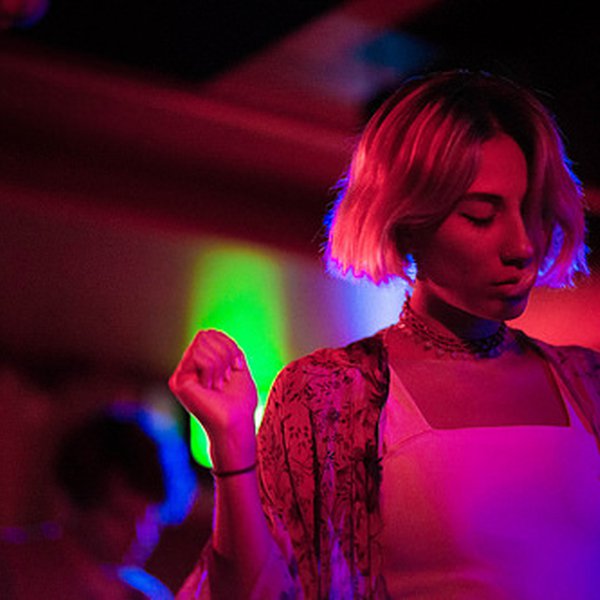 Brooklyn pop singer Tei Shi is on the come up like nobody else in her league. Earlier this year, Valerie Teicher dropped her second EP, Verde, doubling her sonic dynamic, upping her lyrical prowess, and giving us three addictive singles with "Bassically", "Go Slow", and "See Me". Between this and h…