18 year old Swedish rapper Yung Lean (Jonatan Håstad) may be one of the most polarizing, confusing faces on the independent hip-hop scene of the last few years. Pitchfork hates him. Fader loves him. The rest of us find ourselves somewhere in between, trying to balance all of the bizarre parts of the whole that make up the conflicting, contrary stance that the Sad Boys clique puts forth. Referencing the early 2000s on nearly every release even though he was a single digit age at the time, dropping references to childhood nostalgia like Mario Kart a breath away from Gucci and Louis Vuitton, is Yung Lean trying to say something about the affluent, consumer-driven saturation of American culture as an outsider? Or, is he just another in a long line of white middle class kids misappropriating hip-hop culture for fun and profit? I think the conversation that Sad Boys puts forward forces you to ask the question in tandem, and see what the individual conclusion is that you come to.

Good news is that regardless of what you make of his subject material or intentionally eyebrow-raising delivery, Yung Lean puts on one hell of a show. Håstad doesn't depend on preconceived notions, punchlines, or rapport to come into the space with confidence - he makes the stage his own. The packed out (very sold out) crowd at Neumos certainly agreed, off their feet at every possible moment, celebrating Lean's first trip to Seattle and his recently released first studio LP record Unknown Memory. Yung Lean & Sad Boys, along with an intro set from affiliated group Gravity Boys, took Neumos by Scandinavian storm. All opinions of Lean and his crew were set aside for one of night of unquestionable good times - and somehow, that makes the conversation even better. 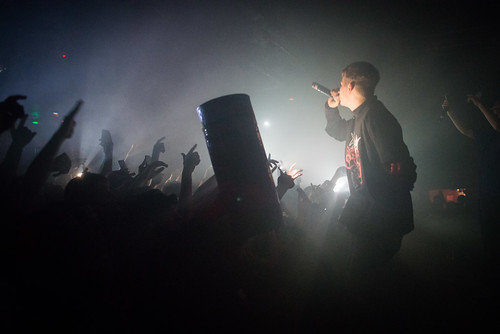 It only makes sense that for Lean's first time to the west coast, Gravity Boys open the evening up. He could probably make it his whole career without ever changing the evenings docket and no one would complain. Gravity Boys (Bladee, Thaiboy Goon, and Ecco2k, and Whitearmor, which may or may not be a RuneScape shout out) have been with Sad Boys as long as the group has existed, cashing in on the more danceable side of hiop-hop flavored pop than Lean and Sad Boys' more straightforward trap influences. But one thing that doesn't change is the sadness - Gravity Boys brought everyone down in the most danceable way to open the night, bouncing all over the stage singing about heartbreak and disloyal lovers. I don't know what else we would expect. Altogether, Gravity Boys did their part in perfectly passable form. 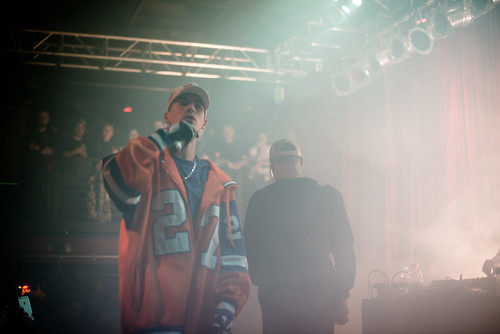 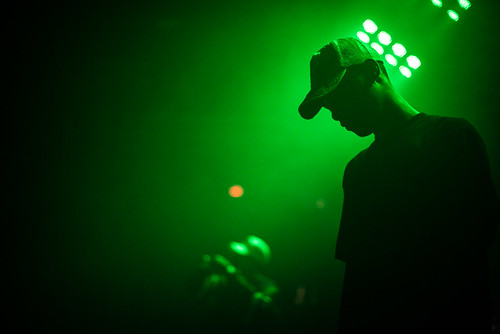 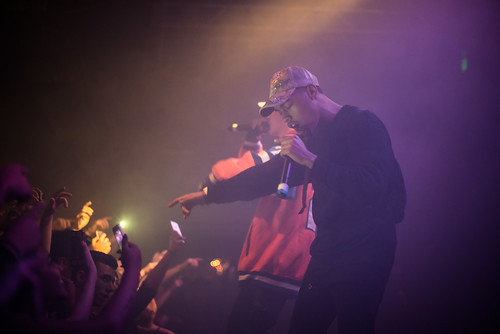 While the direct social commentary may not be as sharp on Unknown Memory as it was on Lean's mixtape from last year Unknown Death 2002, its immediate impact upends its predecessors upon impact. As the synth intro to "Blinded" came on the speakers, the crowd exploded coming off their feet a good thirty seconds before Lean even entered the stage. But when he did, any semblance you previously had of keeping your spot on the floor was gone - the place was a mess. Yung Lean was in every face in the front row with a different line, which meant it was a 500-man fight for the front row for 45 minutes straight. Lean was 100% confidence on stage, moving across the stage and back again with a vibrance and attentiveness that, honestly, was totally unexpected. Every line was delivered crisp and clean, and the autotune has never sounded better than it did in the live setting.

Lean followed "Blinded" with "Hurt", the lead track from Unknown Death 2002, and one of his darkest social commentary tracks of the bunch. With the Neumos floor covered in teenage kids losing their shit to every track, it calls into question whether or not Lean's fans ponder his lyrics as much as they really deserve. It's a similar question that we've been asking for the likes of Odd Future and Tyler, the Creator with his darkly cinematic album narratives. But hey, if he's got them in the room, that's halfway there right? Regardless, one track after another was just explosion following explosion. Yung Lean's fanbase is a rabid beast, and you don't want to mess with it if you aren't partaking.

Aside from the lonely, lonely vibes of Lean tracks like "Yoshi City" and "Leanworld", there are some unquestionable bangers in the bunch. The warm Clams Casino vibes of "Ice Cold Smoke" are equal parts royalty and desperation, which, again, is an entirely bizarre and unique take on how the overarching messages of wealth accumulation in pop music affect the kids. Later, "Ghosttown" is 100% flexing, shouting out to Stockholm for a solid five minutes of mosh dancing. Unknown Memory is chock full of live ready killers, and Lean pulled them all out for his first trip to Seattle. Elsewhere, Lean visited the Soundcloud favorites like "Kyoto" and "Oreomilkshake" to mass crowd acclaim. But it wasn't the setlist that had the crowd moving for the entirety of the brief but impossibly intense fifty minute set. It was entirely Håstad. He's done his research, and his live show is as impactful and confrontational as it could be at this stage with what repertoire he can pull out. Towards the end of his set, ripping out a massive rendition of the melancholy wonder of "Monster", even here at the tail end of the tour, Yung Lean was pure fire on stage, which is really fun to be able to say. Even if the confrontational, conversational effect of Yung Lean's music fades with time, he's a fantastic performer, and that talent will show itself in leaps and bounds in the days to come. 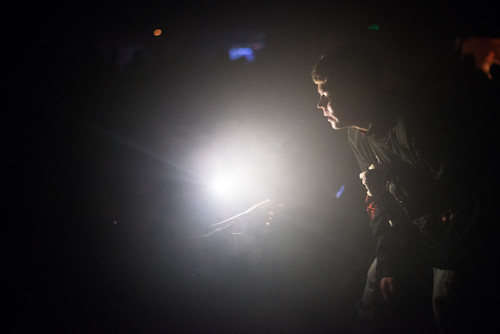 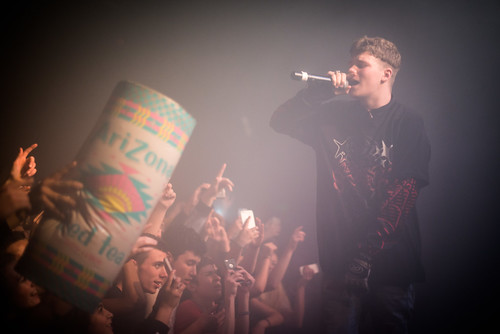 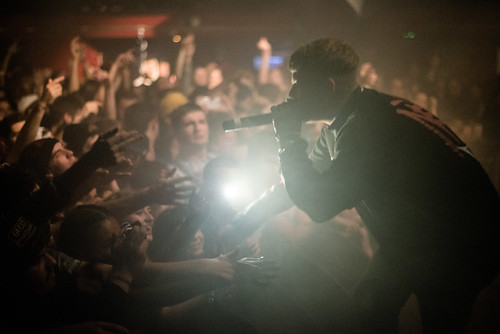 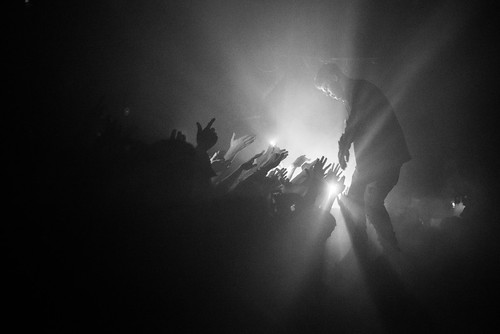 Unknown Memory is out now. 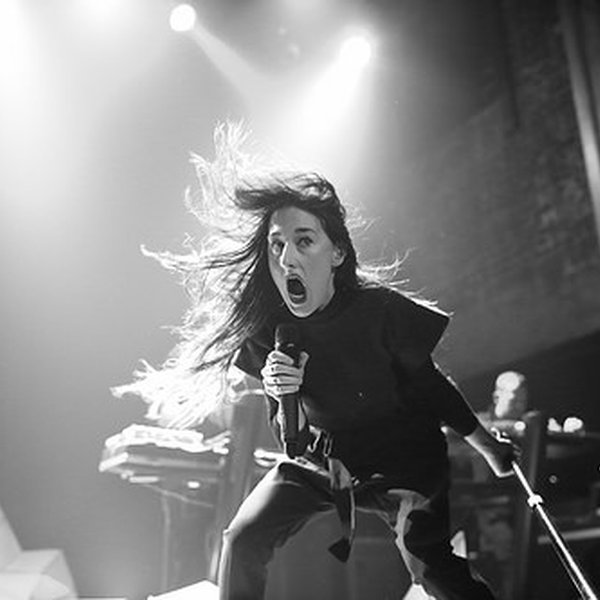 Last year, Zola Jesus returned to the scene with a new look, a new label, and new vastness that she's never shown off before. Taiga, her first LP on Mute, puts Nika on a new plane of existence, much more natural and much stronger than she's ever presented herself to be before. And with it, she has … 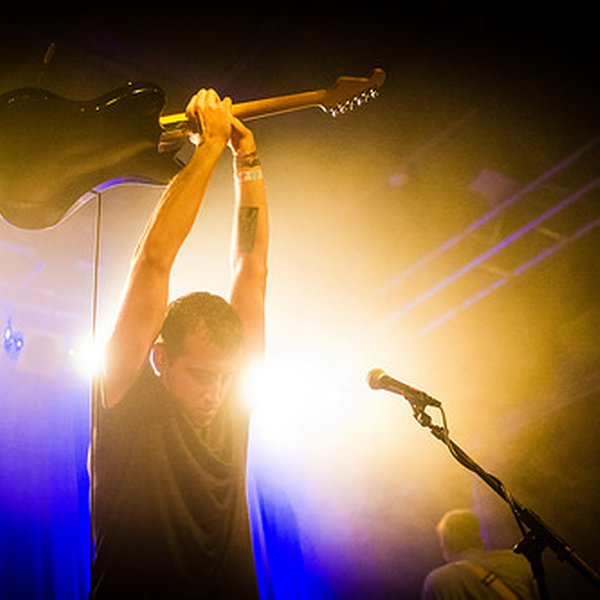 It used to be that every year about this time, KEXP would throw the Yule Benefit show, but it's been five years since our last one. This year, music fans were in for a treat as the show returned to Neumos to raise money for the station's new home, being built at the Seattle Center. The lineup inclu…