Generous musicians and Seattleites came together on Saturday night for the third year in a row to raise money for sick kids and their families. Health care can be intensely expensive, and no family should have to struggle to pay for the lifesaving care their infants and children need. That's why there's the Seattle Children's Hospital Uncompensated Care Fund, and it was for this good cause that a sold out crowd filled The Showbox at the Market to donate an astounding amount of money. All told, SMooCH raised over $638k and featured a lineup of excellent local and national talent, presented by Sub Pop and KEXP.

The night kicked off with the fun, raucous power pop of Seattle's STAG. Lead singer Steve Mack worked the crowd from the outset, urging people to move closer, "and yes we do bite," he teased. This band is a sort of a 90s rock supergroup. They've been together as STAG since 2010, but have many more years experience under their collective belts. And these guys are certainly not shy on stage, jumping and high kicking with wild abandon. They put on a high energy show and got the room nicely warmed up. 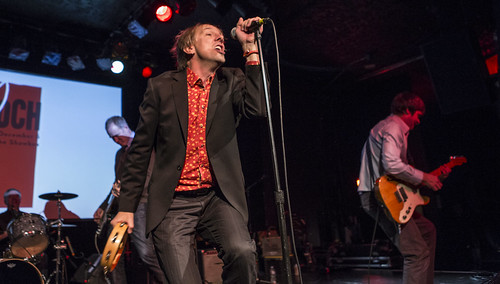 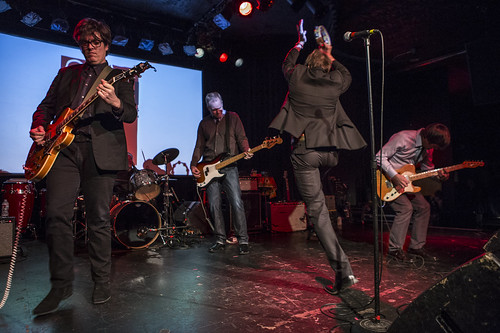 With the crowd properly loosened, the combo of Shabazz Palaces and THEESatisfaction took the stage for a soulful set of lushly layered hip hop and R&B. THEESatisfaction duo Stasia Irons and Catherine Harris-White sang and rapped along with vocal assists and beats from Ishmael Butler and live percussion from Tendai Maraire of Shabazz Palaces. The sonic palate tended towards the organic and funky, and complex enough to be challenging and interesting, yet still infectiously grooving. It shifted between Shabazz's darker tones and THEESatisfaction's more upbeat stride, both sides interwoven with ease. The set finished with THEESatisfaction's "Queens", an already uptempo song pushed up a bassy notch for the live setting. And with that, it was time for a raise the glass auction where attendees pledged generously towards helping families of sick kids. MC and Morning Show Host John Richards led the charge, and the crowd dug deep as they heard from a family whose son's medical problems made the uncompensated care fund a necessity. It was a feel-good moment, and set the stage for a jovial next set. 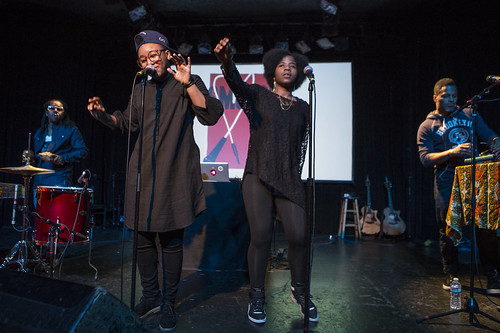 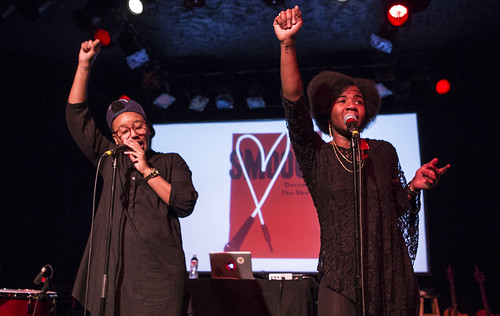 Who knew Sam Beam, a.k.a. Iron & Wine, was such a comedian? After trading beard compliments with someone, he shouted out to the 21+ crowd, "so are you guys ready to get fucking mellow or what?!" This is one of the more intimate shows he's played in Seattle in some time, and Beam seemed loose and easy on stage. Somehow the oldest audience "joke" in the book reared its undead head as someone shouted out a request for "Free Bird". Beam laughed good-naturedly before actually launching into strumming the first verse or so of the Lynyrd Skynyrd classic on his acoustic guitar. Clearly he was amped up on the classic rock vibe, because he managed to break a string on his first full song, "Upward Over The Mountain", which is a typically restrained and mellow tune. "Too much emotion for one guitar," Beam joked as he quickly changed the string, unfazed, and launched right back in where he'd left off.

Beam took requests for seemingly all of the set, playing several deeper cuts and few of his biggest hits. His voice was tender and on point, and his quiet finger picking and strumming drew the capacity crowd closer to the stage (partially to escape the loud, tipsy chatter from the bar section). Beam was amiable, and displayed excellent control, never raising his voice or straining. His second song, "The Trapeze Singer", was a beautiful ballad that appeared on his 2006 Sub Pop EP, Such Great Heights. Before playing he announced, "this is a long one," to crowd cheers. To this he responded with a goofy grin, "you guys are stupid," to more laughs and cheers. Of course it wasn't all laughs, as everyone in the room was aware they were gathered for an important cause. After thanking the crowd again, Beam said, "take a note of how you feel giving money to good causes, and do it more often." He finished off the 8-song set with another deeper cut, "Biting Your Tail". With lyrics like, "May your hands be strong and willing. May you know when to speak and to listen," it seemed like a prayer for all in attendance. 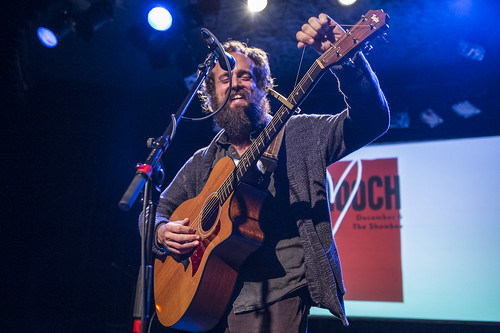 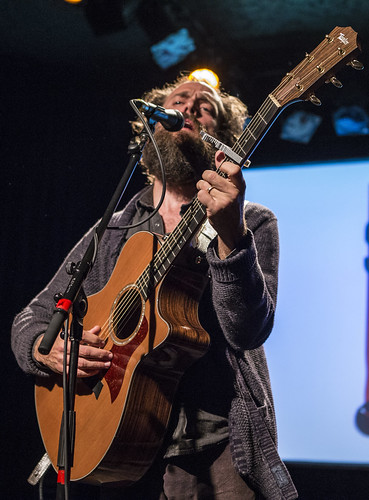 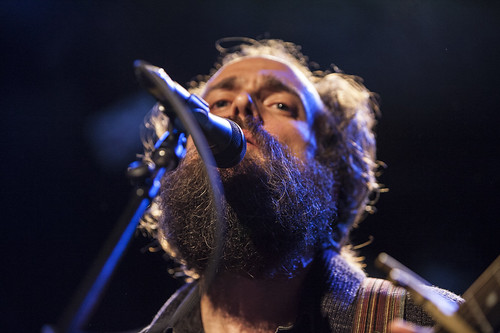 The final act of the night was former Seattleite Ben Bridwell of Band of Horses (also Carissa's Weird). He took to the stage solo as well, but preferred an electric guitar. The room was still buzzing, so Bridwell asked with a snaggletoothed grin, "do you guys party?" The crowd roared its assent. Bridwell played a set sprinkled with a couple of covers, starting off with the Silver Jews' jangly indie rock tune "Black and Brown". Next he played through the Band of Horses song "St Augustine" from 2006's Everything All The Time. Bridwell slipped from jovial banter to heartbreakingly tender and sad singing. After the song, someone shouted unintelligible appreciation at Bridwell, to which he replied, "don't encourage me, gurrrrl!" Next he launched into a surprising yet honest cover of Florida Georgia Line's pop country smash hit "Cruise". You know the one, "Baby you a song. You make me wanna roll my windows down and cruise." It was a bit of a lark for sure, yet Bridwell managed to sort of nail it even as he simultaneously made the room laugh.

Like Iron & Wine, Bridwell mostly avoided his band's biggest hits, but he did play a beautiful solo acoustic version of "Laredo", showing off his high, clear, yet vulnerable vocal prowess. These songs held up to the solo acoustic treatment, thanks in no small part to strong songwriting and Bridwell's great stage energy. Both Bridwell and Beam were born in South Carolina, and that jocular southern charm was on full display. "Alright, since I'm doing such a great damn job, here's the stupidest song I've ever written," said Bridwell before playing a tune about the singer's love of his wife, kids, weed, and knives. Then it was back to a bittersweet and melancholy take on "Dilly".

This emotional roller coaster exemplified the evening. It was a night of jubilant celebration and the good feeling of giving, punctuated by an awareness that there are kids very much in need of medical care and families struggling to make ends meet. Bridwell played Graham Parsons'"A Song for You", which he dedicated to his Carissa's Weird Bandmate Sera Cahoone (who Bridwell said was in attendance). Then he credited Sam Beam for turning him on to J.J. Cale, presumably in their growing up in South Carolina, before he played the bluesy "Thirteen Days". "I'm not going to overstay my welcome," announced Bridwell, "but it's been a damn pleasure playing for y'all." He closed out with Band of Horses' "Marry Song". The crowd called for more as he left the stage. 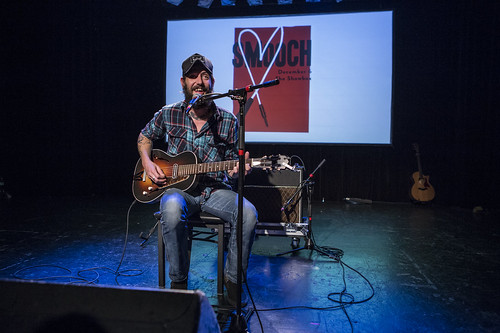 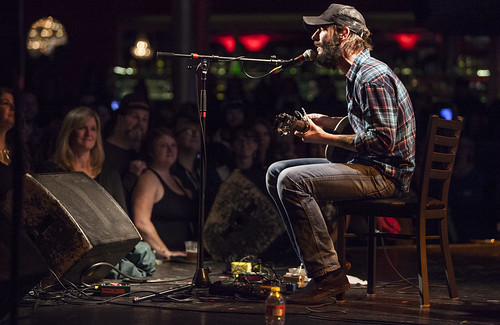 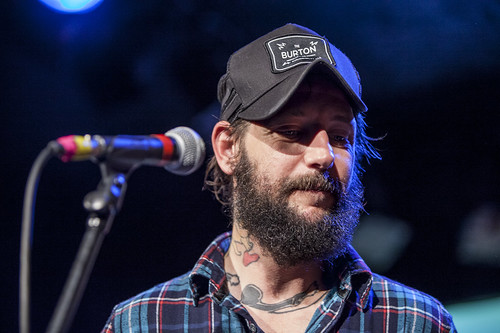 After Bridwell's set, KEXP DJs Larry Mizell Jr. and El Toro (Kurt Reighley) announced the total raised by the evening's ticket sales, auctions, and other generous donations. In 2013, SMooCH donors managed to bring in over 350 thousand dollars, an impressive haul in its own right. But this year, thanks to all the musicians, auction item donations, volunteers, and generosity from those in attendance, the event brought in more than $638,000! All told, the night was a runaway success. For an encore, old friends Sam Beam and Ben Bridwell took the stage together to pay homage to another South Carolina export, The Marshall Tucker Band. They shared gorgeous harmonies on "AB's Song", singing, "if I die at 23 won't you bury me in the sunshine? Please let me know that you're still mine. Though I'm gone, my love for you is oh so strong." It was a short and sweet ending to an excellent night of music and doing good for the community by insuring healthy futures for our children. 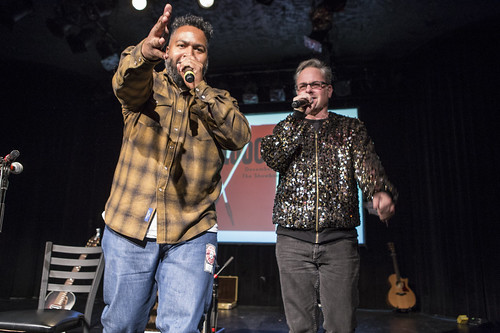 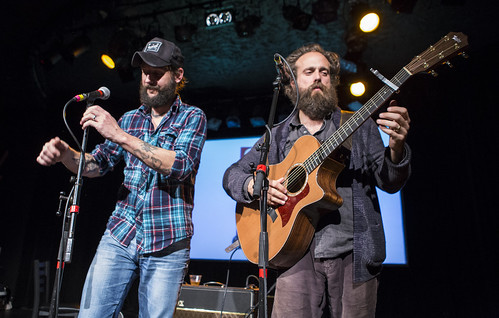 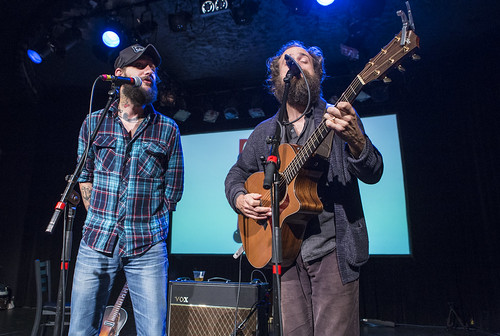 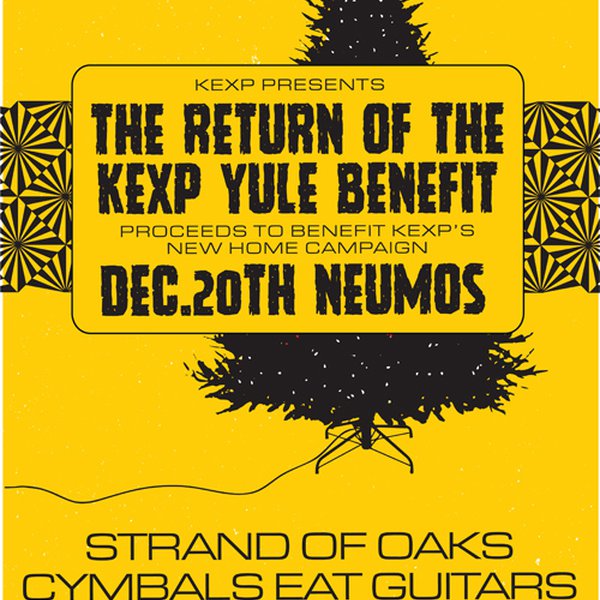 It's the most wonderful time of year... if "wonderful" actually means insanely busy. All the more reason to make some time for the music and attend KEXP's 2014 Yule Benefit! It's back and better than ever. This year features an amazing line-up of artists — Strand of Oaks, Cymbals Eat Guitars, S, ... 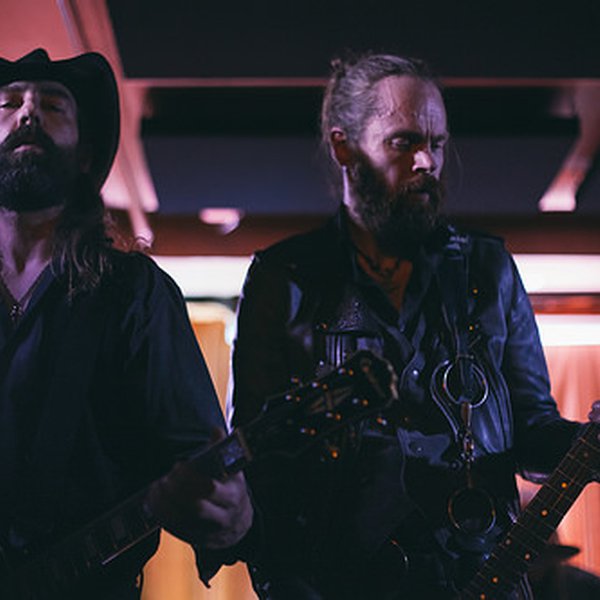 It's not often you get to say you saw a three band gig where all three bands blew you away for completely different reasons. Luckily for those crammed in Neumos basement at the sold out Pallbearer, Sólstafir, and Mortals show Thursday night, that was 100% the case. Each with an entirely different... 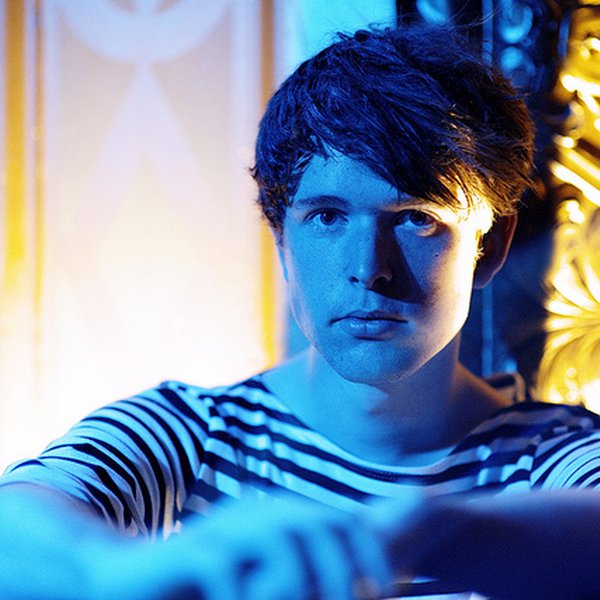 Surprise! UK singer/producer James Blake quietly released a new double 7" single today, via his own brilliantly-named label 1-800-Dinosaur. Stream tracks from the single 200 Press below, which concludes with the poem "Words That We Both Know." The mini-release will hold you over 'til Blake relea... 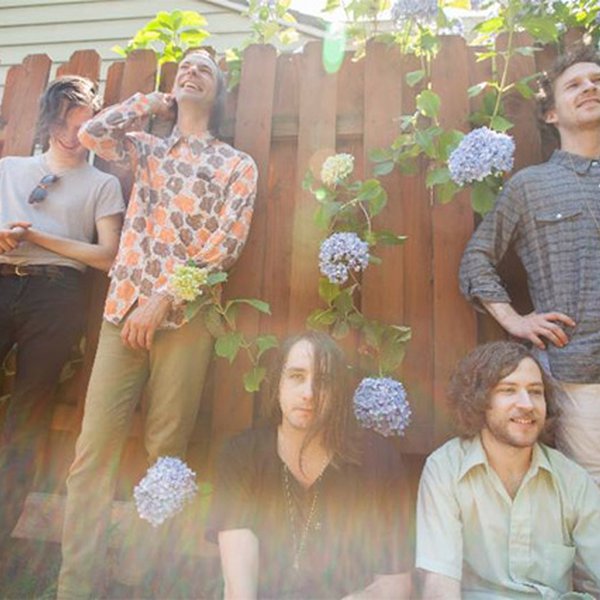 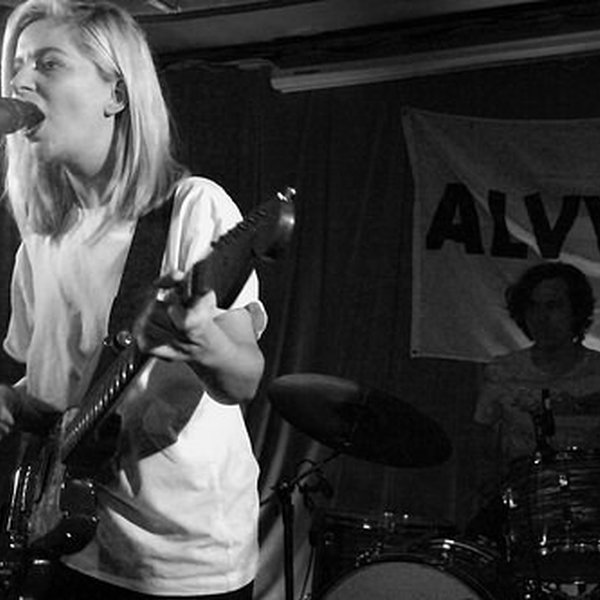 Toronto indie rock band Alvvays introduced themselves to Seattle in quite a dazzling fashion Tuesday night. This was the band's last US show on the tour supporting their fantastic self-titled debut (out now on Polyvinyl) before heading up across the border to finish things off before the end of t... 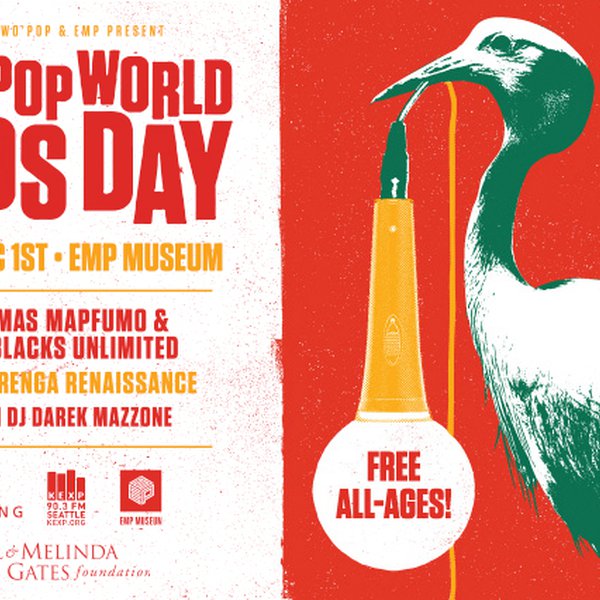 Wo'Pop, The Bill & Melinda Gates Foundation, and Lifelong invite you to join us at the EMP Museum to observe World AIDS Day on Monday, December 1st. This free, all ages event will run from 5-10 p.m., featuring art, snacks, educational materials, cultural elements, and musical performances fro...