When Seattle hip-hop duo Shabazz Palaces announced an album release show for their sophomore LP, Lese Majesty, there was no question that the event would be a family affair. Ishmael Butler and Tendai Maraire both have deep Seattle roots and have helped assemble a brilliant coalition of artistic minds in Black Constellation. The team recently combined efforts for Your Feast Has Ended, a powerful and emotive art exhibit at the Frye Museum showcasing the work of Nep Sidhu, Maikoiyo Alley-Barnes, and Nicholas Galanin. Your Feast Has Ended marries "the ancient and sacred in unison with the new and revised" to give cognizant incarnation and immediacy to the cultural misappropriation that we see around us from day to day. Lese Majesty is, in many ways, how Shabazz Palaces create the musical embodiment of these same ideas. Featuring backup vocals from THEESatisfaction and artwork by Nep Sidhu, there is a grand sense of continuum between the artists that make up Black Constellation and the message they are conveying here and now. It is a great time for these artists, and the Lese Majesty album release party felt like a grand ceremony to celebrate accomplishments across the board in dazzling fashion.To warm the crowd and the artists up for the main event, new Sub Pop signee Porter Ray popped the cork on the evening and got things started off right. Friday was a proper celebration for Porter Ray too - the official announcement of his Sub Pop deal dropped just that morning, right after he dropped a new mixtape in the form of Fundamentals. Being that Ishmael Butler played a big part in bring Porter Ray to the family, I'm sure he was more than happy to get the party started tonight. Aided by some live vocal additions from JusMoni (another insanely talented upcoming Seattle voice you'll want to pay attention to) and visually complimented by Hype Williams classic Belly playing in the background, Porter Ray had no problem bringing the good vibes of new tracks like "Ruthie Dean" to a room of unfamiliars. By the time he wrapped up his 45 minute set, the crowd was sold. Porter Ray led a handful of shouts of "Your feast has ended!" throughout the set - a group effort of lese majesty before we made room for the new kings. 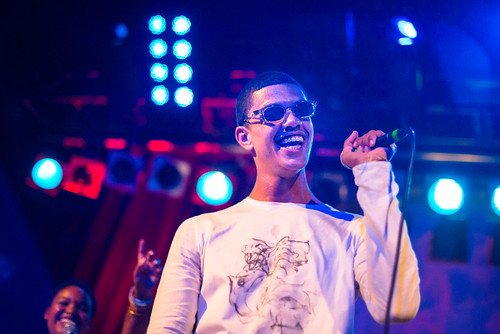 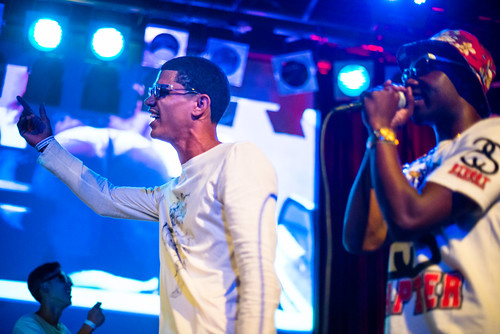 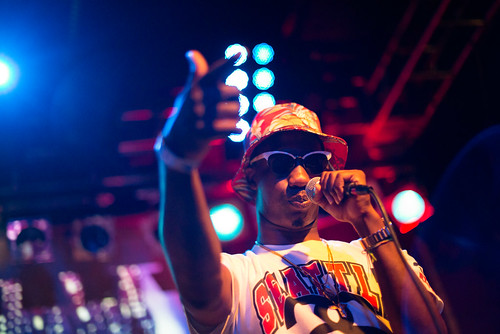 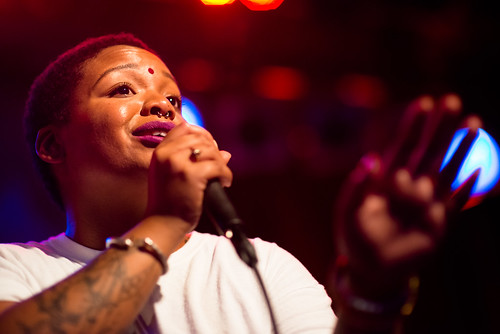 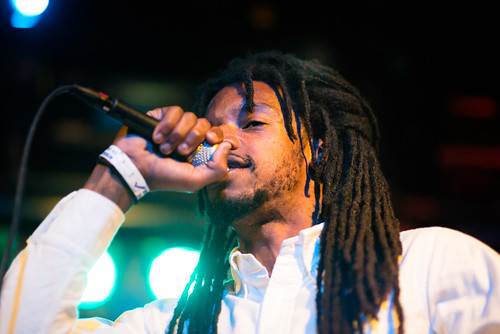 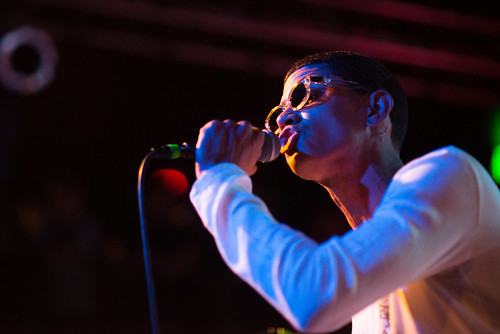 As the stage turned over, the first thing that went up was the art. Nep Sidhu really outdid himself, bring his amazing Found Paradise piece to the stage for this event. The piece was heavily influenced by new Shabazz material, as Sidhu documents in the piece's biography, so there could be no more appropriate horizon for the action happening on stage tonight. Beat genius OCnotes appeared onstage for a split second to trigger a track on Butler's laptop and music filled the air. Butler and Maraire both made their way through the packed out crowd playing drums and shakers as they danced forward to massive applause. Once they reached the stage, they were joined by the present members of Black Constellation, including Nep Sidhu and Maikoiyo Alley-Barnes among others. From the very beginning there was an unmistakable sense of community in the room. On stage and in the background, there was a group of brilliant artists working together to create something beyond a good concert - this is a movement. And in the foreground, there is a crowd dying to take part, knowing how special this moment is and wanting every second lived to the fullest. It's a rare occasion to feel love and togetherness at this level, but if anyone can make it happen, it's Shabazz.

Lese Majesty resolution "New Black Wave" opened the night up with a statement. Here in the live setting, apart from the fluid story of their new record from start to beginning, Shabazz Palaces had a chance to showcase the individual pieces in a larger sense of celebration. After the introductory festivities, Shabazz dropped "They Come In Gold", the first blip from Lese Majesty we heard back in May. Here, the dancing really got started, with cheers rising all around when Butler asked "Shall we raise a drink?". For this record, the answer to that question is as obvious as they make it out to be.

The setlist was dynamite. Black Up classics like "free press and curl", "Youlogy", and "An Echo from the hosts..." split up the new record in excellent fashion, with Butler and Maraire showing off their coordinated shoulder dancing and letting the crowd interact a bit more on the more familiar numbers. The questions were always the loudest - "Who do you think you are?" and "How fast do you want it?" were rallying cries on the main floor and in the rafters above. Questioning the prevailing culture is a cornerstone of Shabazz's message, and it's fun to hear fans possess the same furious inquisition in this context. But as far as dancing and interaction goes, the new material took the cake (pun intended). The pulsing brilliance of "Ishmael" and bass-heavy majesty of "Dawn In Luxor" had the room packed to the gills with beautiful noise. And of course, when "#CAKE" dropped, Neumos came alive like there was no tomorrow.

Here in Seattle, we are totally spoiled getting to be such active participants in Shabazz's emerging brilliance, and nights like tonight only solidify that. Shabazz Palaces put on a show without limits for their hometown album release. When Ishmael got to the city name-dropping portion of "#CAKE", he just repeated "Seattle" over and over and over again. That wasn't a gimmick though - these guys just love this city and back up words with action like no one else could. Tonight it was an amazing experience to get to celebrate this next phase of the Black Constellation with all hands on deck. There's no better way to put it than in their own referential words - tonight, in the presence of Shabazz Palaces and amongst a loving community and artistic collaborators, we touch and agree.

Lese Majesty is out now on Sub Pop. 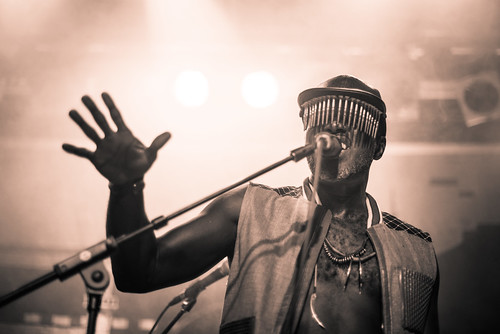 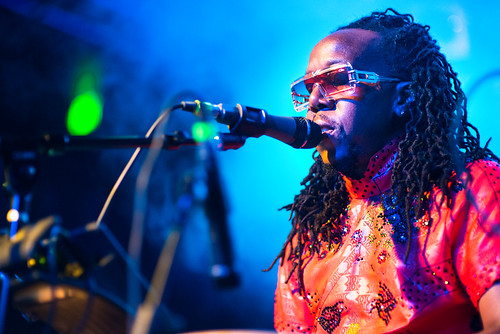 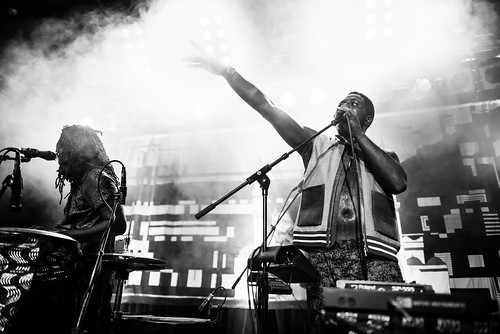 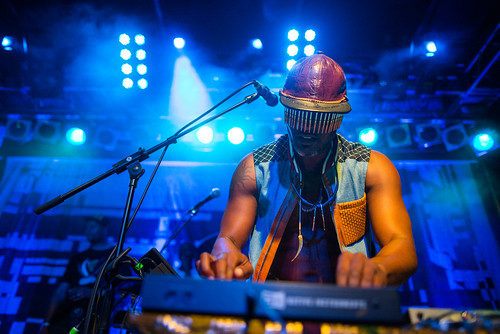 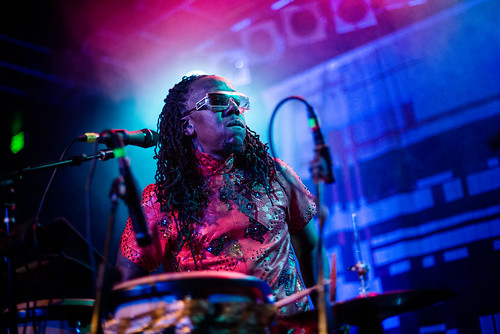 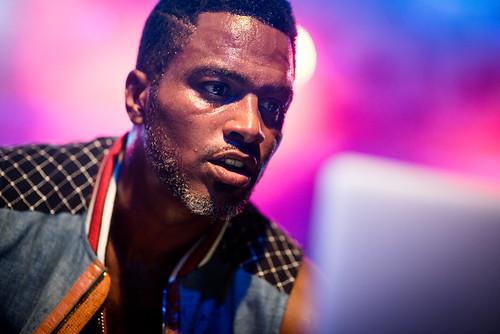 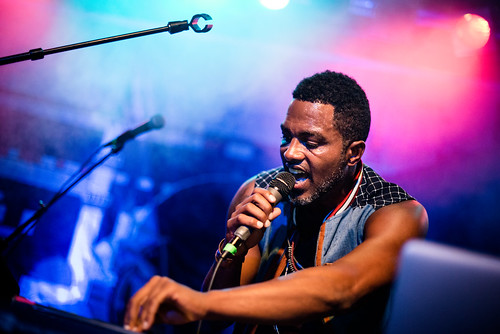 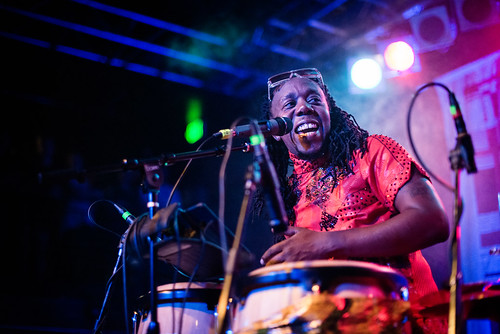 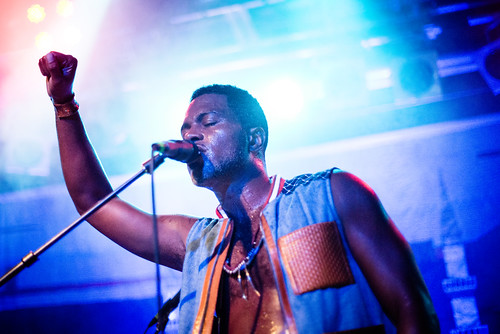 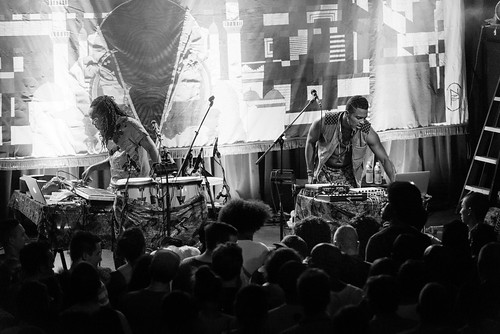 Check out the rest of our photos here. 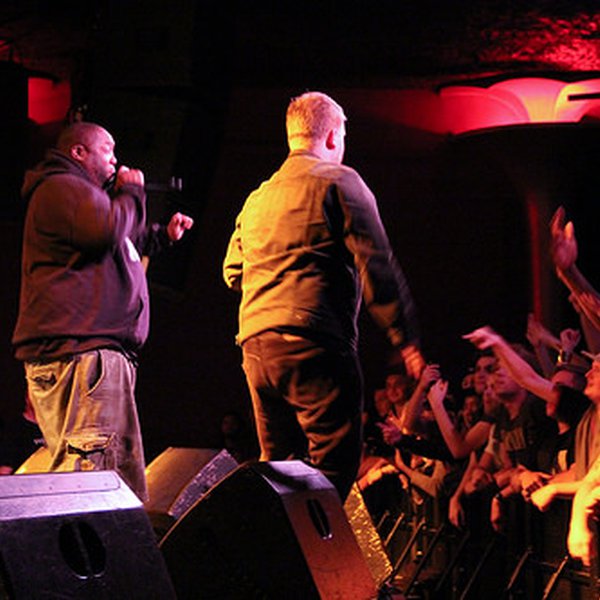 "Put up your fists and your guns one time right now", Killer Mike yelled over the Showbox crowd. Across the room, hands went up mimicking the cover art from the self-titled debut from Run The Jewels. Mike nodded in stoic approval. "This is hands down the best tag team the world's got going right no… 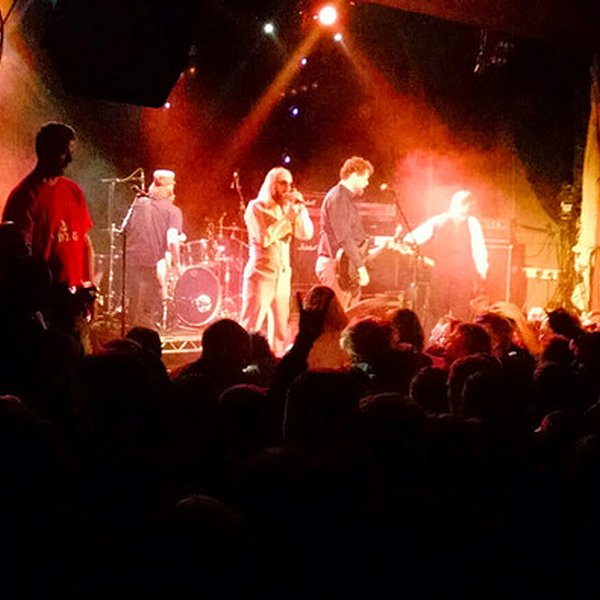