Live Review: Guided By Voices with Bobby Bare, Jr. at Showbox at the Market 6/8/14

It's only June, and already indie rock veterans Guided By Voices have two new albums out, because of course they do. Not only are the band touring in support of their self-released full-lengths Motivational Jumpsuit and Cool Planet, but they're also celebrating the 20th anniversary of their lo-fi masterpiece, Bee Thousand. 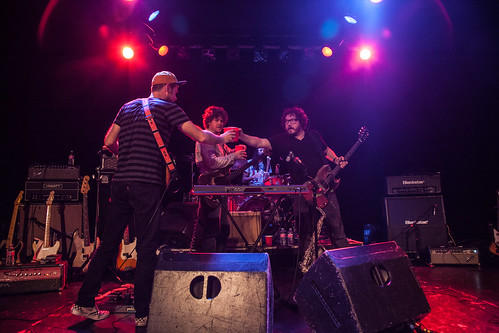 I'll admit, when I first heard the night's bill, I was kinda surprised: I've always thought of Nashville-born singer/songwriter as more of a "country" artist, like his dad. But, Bare, Jr. and his band brought a rambunctious ruckus to the stage that set the drunken pace for the veteran Ohio band ahead. 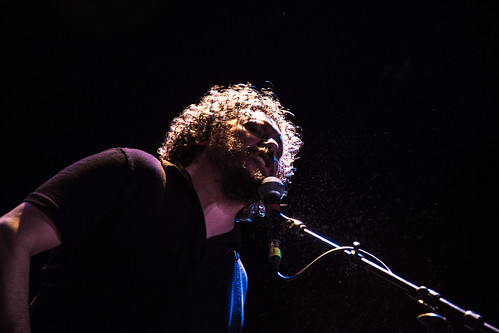 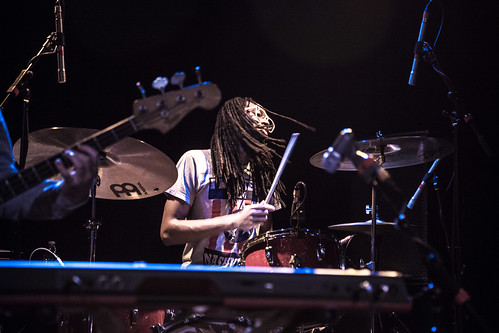 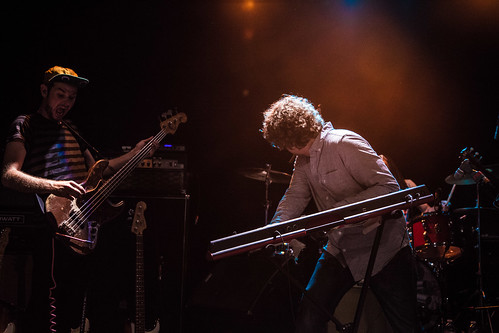 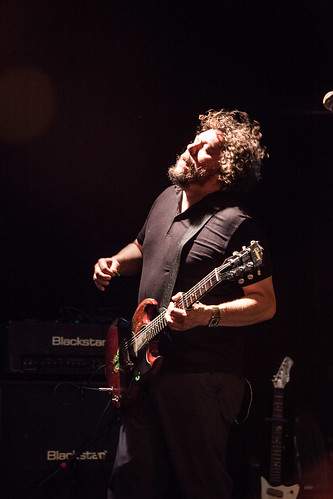 The energy definitely kicked up at the anticipation of Guided By Voices. I overheard several fans bragging about the distances they had driven for the show: Vancouver, Boise, Portland. The beer count was probably pretty high at this point, too.

I feel like a Guided By Voices concert is one of the few shows you can go to where it's actually cool to wear the band's shirt to the show. The whole thing felt like a sporting event, which is not a huge surprise considering frontman Robert Pollard was a tri-sport varsity athlete in high school. (One of the t-shirts at the merch table boasted that he threw the first no-hitter in the history of Wright State University — see below.) If Pollard had asked us to do the wave, I think we would've enthusiastically responded. 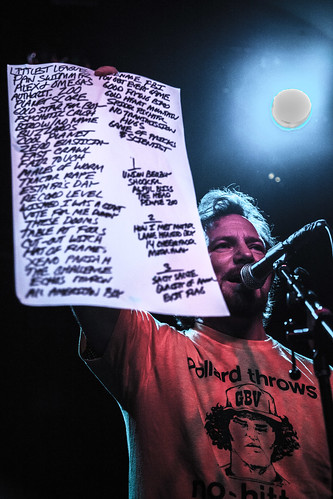 Eddie Vedder of Pearl Jam came out to introduce the band, sharing a glimpse of the tome that is a GBV set list. (See his shirt?) And then the band came out, and began to plow through the songs. "This one's called 'Littlest League Possible'!" — 2 minutes of music — "This one's called 'Pan Swimmer'!" — 2 minutes of music. Pollard wants to make sure you get the most music for your ticket price, and he and his co-horts play as much as they can physically endure. 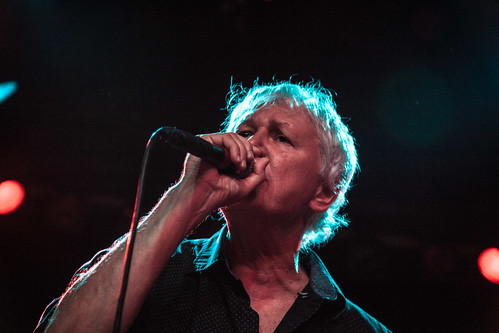 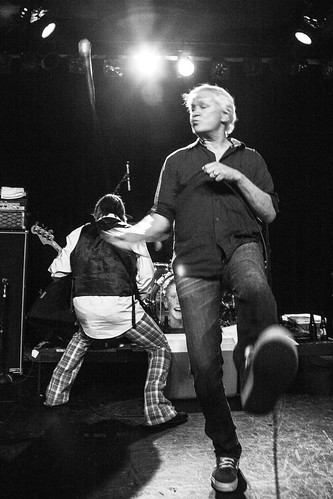 Speaking of physical endurance, well, there's no denying: dudes got old. Pollard still somehow drinks like a fish, though I notice he takes a gulp or two, and then passes off the bottle to someone in the audience. (Hence why it was a 21+ show.)

He seemed pretty drunk though. Do you remember that episode of The Simpsons where Homer sends Marge this postcard?

That's what Pollard's in-between song banter sounded like. "(Mumblemumblemumble) Lou Barlow! Get outta here..." I bet he told some great stories, if only we could've understood them.

And he still goes for his kung-fu kicks, but he has to kinda... build momentum to swing his foot up there. And only on one side. (Someone joked that he must've had a hip replacement on the other leg.)

This isn't to sound like I'm picking on him though, because he's still the father (well, grandfather) of rock, somehow remembering the lyrics to all 254 songs on the set list. 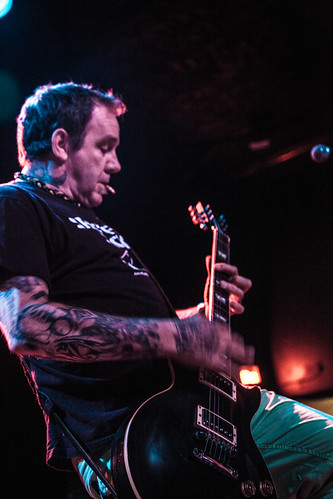 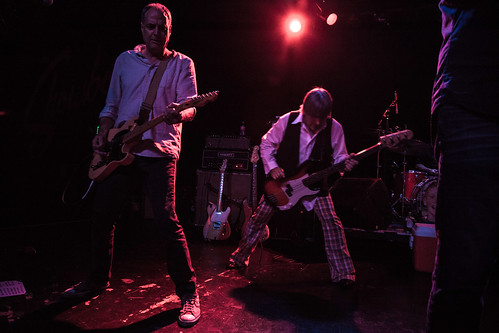 And let's talk about the rest of the band: HOW BLACK ARE MITCH MITCHELL'S LUNGS AT THIS POINT? All throughout the show, he had an ever-present cigarette dangling from his lips. I was genuinely impressed that he was able to sing back-up, play guitar, and smoke at the same time. How many cigarettes does he burn up per show? Does he have a cigarette-specific roadie who lights them for him?

Bassist Greg Demos (incidentally, also a partner in the law firm of Fowler, Demos & Stueve in Lebanon, Ohio, and the band's official lawyer) kept leaning into the audience, in full-on rock star mode.

And then there's the great Tobin Sprout, a songwriter I love so much I named my cat after him. (R.I.P. cat-Tobin.) I selfishly thought to myself, "I wish Tobin would go on a solo tour," and then as the set list progressed, I pretty much got my wish as he took lead vocals on many, many tracks. At one point, Pollard even left the stage so the spotlight was purely Sprout's.

As you can see from the sprawling set list Vedder is holding, there were plenty of old songs sprinkled amongst the new ones, but a definite highlight for me was in the second encore when Sprout and Pollard dug out "14 Cheerleader Coldfront" from the 1992 album Propeller. Thank you, GBV. Please take your vitamins and keep stretching your calves so we can see you back on tour again soon. 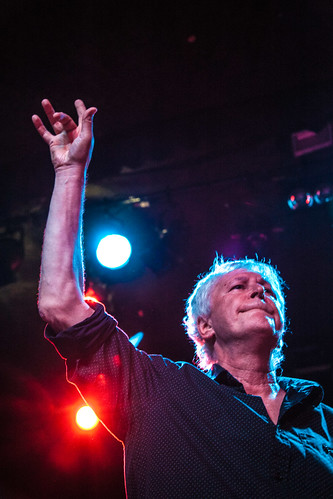 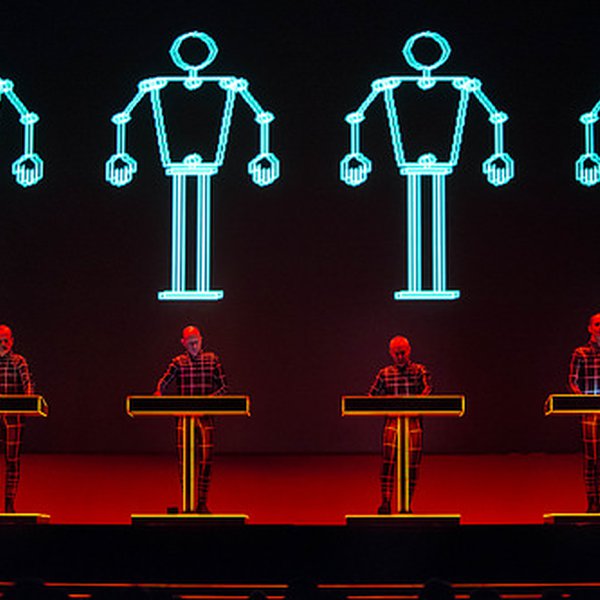 What I'm about to write sounds corny — let's just get it out of the way right now that I know that. I know the Kraftwerk catalog like the back of my hand, but, I have to say, despite this lifelong familiarity, seeing them live for the first time ever, and in 3-D, no less, I felt like I was experien… 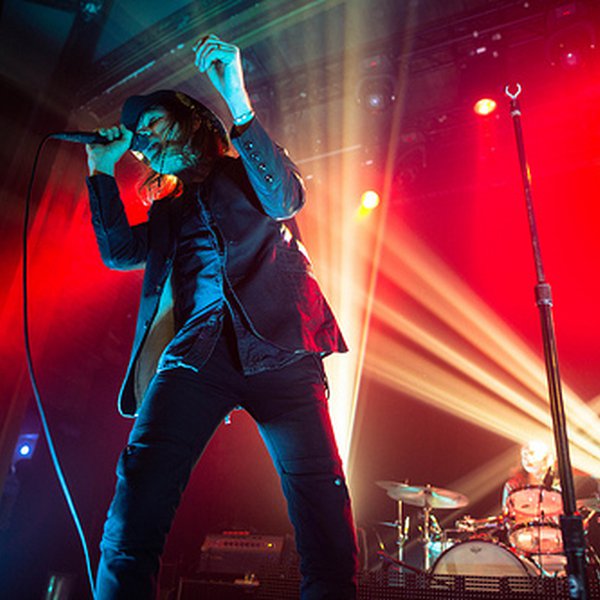 Live Review: The Faint with Reptar and Grave Babies at Neptune Theatre 5/30/14

Fresh off of the release of sixth studio album, Doom Abuse, Nebraska synth and dance punk band The Faint brought one hell of a Friday night to the Neptune. While Doom Abuse is the band's first new record in six years, the band hasn't lost any steam in time away - least of all in their famously fant…