In long distance running, there's a term for a moment near the end of a race where a runner's mental resolve breaks down: "The wall". Sunday at Bonnaroo is that wall. If they were able to break through on Sunday morning, there were still plenty of things to see and do all day, but if they weren't, fest goers might have been lucky to catch the end of The National or passing out to Tom Petty before begrudgingly hitting the road. Sunday was the weekend's hottest day, but for those that were able to pace themselves, it might have also been the weekend's best. Although no one wore a jellyfish mask (like Bjork) or brought out fireworks (like Paul McCartney), the day's lineup was both diverse and consistently high quality, which was a fitting end to this year's iteration of music's most consistently head-scratchingly brilliant festivals. 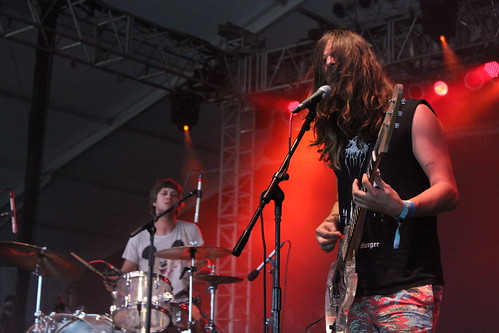 Jeff the Brotherhood - 1:45 - On any given Sunday afternoon, there are a lot of people who are hungover. On Sunday afternoon at Bonnaroo, everyone is hungover (Or, at the very least, they're exhausted), so it's probably appropriate that JEFF the Brotherhood - a band whose most recent single is called "Sixpack" - was enlisted to revitalize fest-goers on the weekend's final day. Playing to a sorta-hometown crowd (the band's native Nashville isn't too far from Manchester), Jake and Jamin Orral ripped through garage rock burners one after another, with a focus on last year's Hypnotic Nights, and the probably-dehydrated crowd ate every last one of them up. JEFF the Brotherhood's set was essentially the musical version of booting and rallying - instead of quitting when you're sick or tired, just go harder. 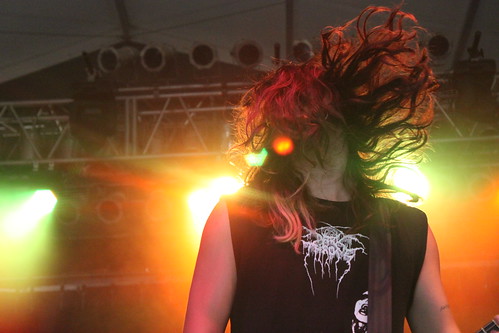 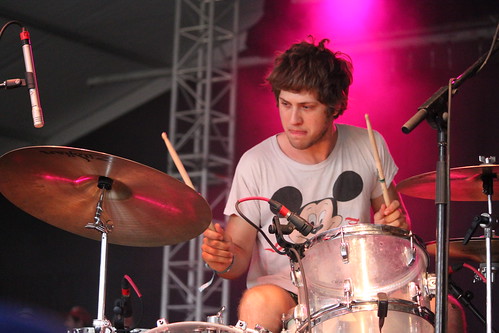 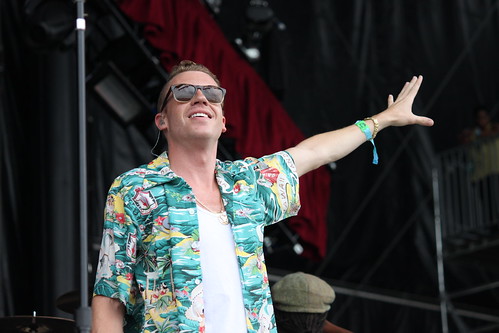 Macklemore & Ryan Lewis - 2:30 - In all likelihood, Macklemore's summer has already peaked. He had an undeniably triumphant hometown set at Sasquatch this year that really can't be topped, so he couldn't be blamed for not topping that spectacle at Bonnaroo. However, he almost did. Playing to maybe the biggest crowd of the day, Ben Haggerty and Ryan Lewis brought the high energy and stage theatrics that have made them superstars to Manchester, with a massive crowd throwing down to a set that was heavy on hits - chart-wise or viral. Slightly less talkative than he was at Sasquatch, Macklemore made the most of his increased production budget - the fur coat and Bowie-esque wig were highlights in the 85+ weather - and hit another festival set out of the park. For those that aren't already on the train, it's hard to see Macklemore going anywhere but up from here, because he gave Bonnaroo a reason to dance, to cry, and to have a really, really, really good time. 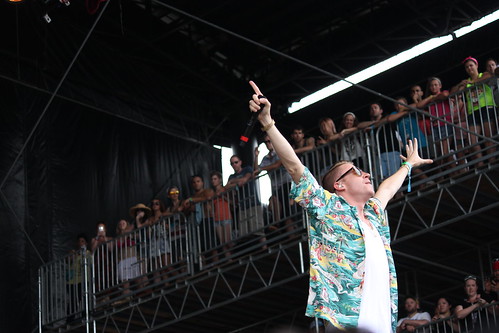 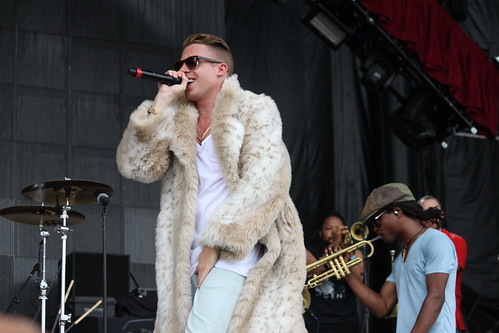 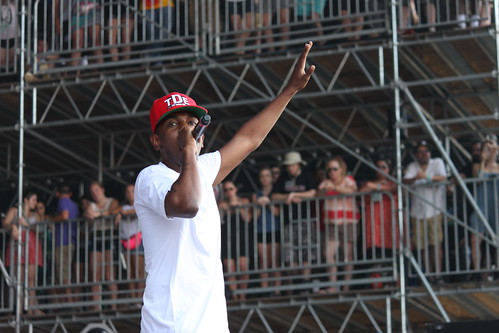 Kendrick Lamar - 4:30 - Perhaps more than any other festival this year, Bonnaroo did hip-hop right, booking legends and newcomers alike, and having the some of the biggest audience turnouts as a result. Although Wu-Tang dominated Friday, Sunday was all about Kendrick Lamar. Since dropping his instant-classic debut last fall, Kendrick has become the genre's most acclaimed MC in some time, reaping commercial and critical success from pretty much every kind of music fan. (For comparison, K. Dot drew a bigger and more engaged crowd than Nas, who had an almost identical timeslot and stage, The National, who have been on people's radar for nearly a decade, and almost outdrew Tom Petty, who headlined that night.) Since making his major-festival debut at Coachella last year, Kendrick has grown into a natural performer who feeds off the crowd with the kind of bravado that only comes with knowing that you are, in fact, Kendrick Lamar. There were no foundation to the rumors of star cameos that had been passed around the Farm that weekend, but that didn't matter - Kendrick is a star who, like Macklemore, is only going up. 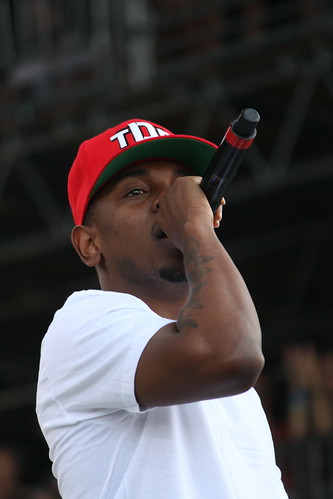 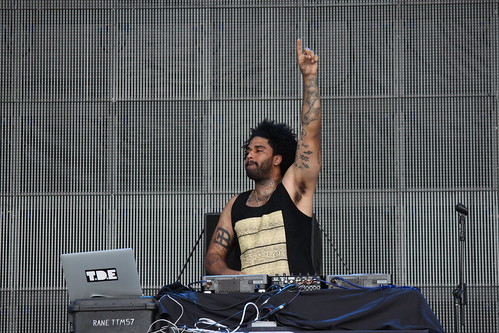 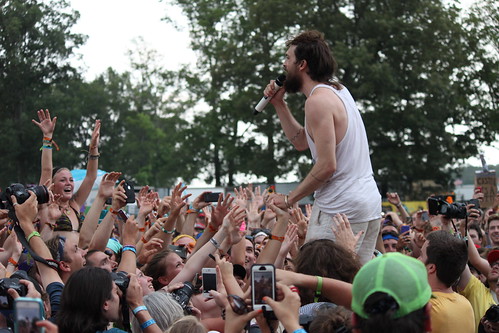 Edward Sharpe and the Magnetic Zeros - 5:30 - A few days earlier at Bonnaroo, Mike Birbiglia told a joke about Edward Sharpe playing a set at Sasquatch to "a bunch of people who looked like Edward Sharpe", and when he told band member Jade Castrinos (the titular Edward Sharpe) said joke, she didn't laugh, and after seeing the intensity of the band on Sunday evening, it was easy to see why: leader Alex Ebert and his bandmates are dead-serious about what they do. The band's set - heavy on material from last year's Here and the forthcoming self-titled album - was carried out the only way a band that barely fits onstage can - with feverish devotion from both the band and the audience, forming a religious experience. "Home" was certainly one of the weekend's most anthemic singalongs, and for one of the final sets of the weekend for people who had work on Monday morning, it was a fitting and gorgeous soundtrack to a final Bonnaroo sunset. (And for the record, very few people in the audience looked like Edward Sharpe, unless Ebert has subtly started wearing American flag tank tops.) 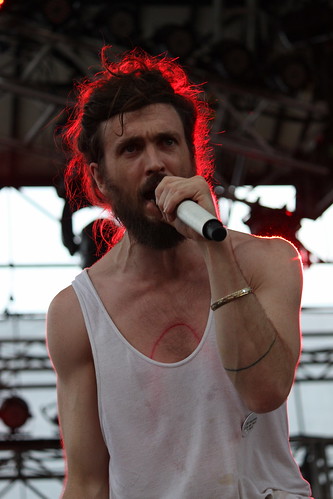 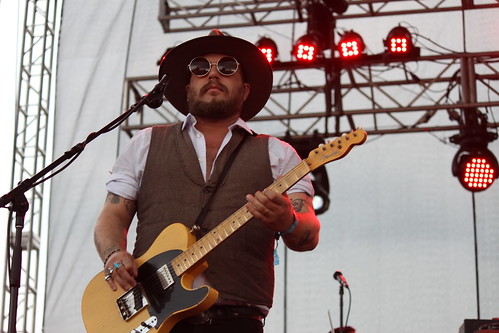 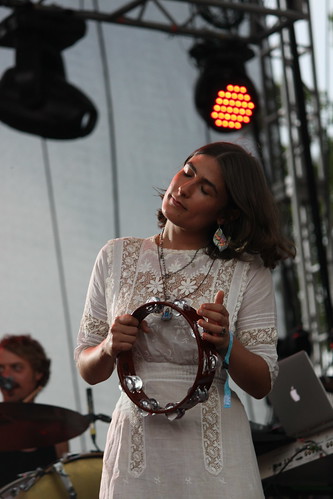 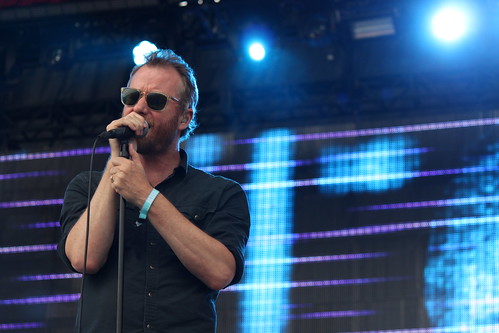 The National - 6:30 - Aside from Arcade Fire and maybe Vampire Weekend, The National are probably the biggest indie rock band to emerge from the post-Pitchfork landscape, and after six albums where they've progressively grown in emotional and musical scale, they may have reached their pinnacle, because Sunday's performance was a showcase of a band who has never been stronger. Sure, it's easy to play a great show when you have at least four great (and, arguably, at least two classics) albums to draw from, but the Brooklyn quintet - supported by two touring musicians - seemed completely in-sync with one another, which is probably reflective of the decrease in interpersonal tension within the band. Most impressive though, was Matt Berninger, who is, by his own account, not a natural frontman. The bespectacled singer punctuated the songs' climaxes with cathartic screams, swung his mic stand wildly in between swigs of some kind of alcohol (wine?), and spent most of the last two songs - a chaotic "Terrible Love" and triumphant "Mr. November" - in the crowd surrounded by the audience. Judging from the band's absolutely stunning performance on Sunday night, it wouldn't be surprising if they're spending next summer headlining every festival bill they can get onto. 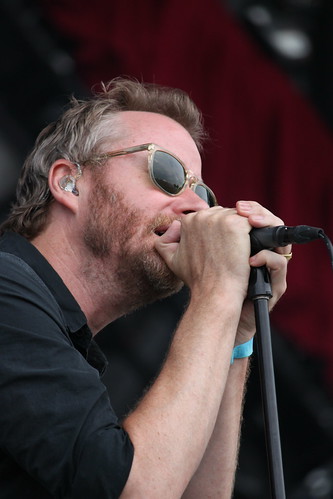 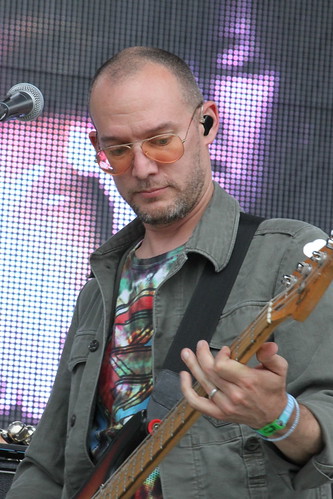 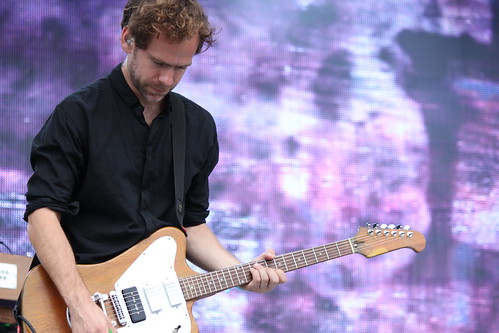 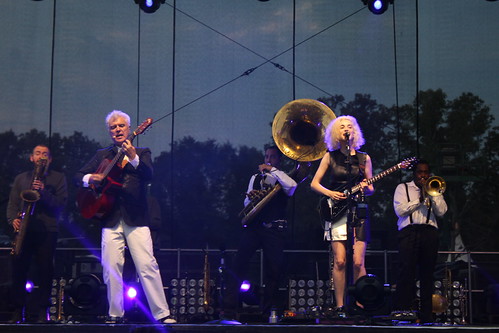 David Byrne & St. Vincent - 7:30 - For those who opted to not end their weekend with Tom Petty's hit parade or A$AP Rocky's shirtless theatrics, David Byrne and St. Vincent's performance was their last hurrah, and if they came looking for a horn-driven, highly-choreographed performance filled with Talking Heads classics, well, they didn't leave the Farm disappointed. Much like Byrne's 2008-9 tour, all of the onstage musicians incorporated a degree of choreography into the performance, which split the set between Love This Giant material and the two artists' solo catalogs. Unsurprisingly, the Talking Heads material drew the biggest cheers, but those songs - "Naive Melody", "Burning Down The House", "Road To Nowhere" - were also the night's highlights because Byrne has been rearranging those songs to fit different bands for years, and he knows how to make them work for just about any audience. The real star of the show though was Annie Clark, who alternated between shredding on her guitar and interacting with her bandmates when she wasn't taking the lead. (Clark also appeared with the National about 30 minutes before she was due onstage for her own show.) She had already proven herself to be a star performer in her own right on the last leg of the Strange Mercy tour, but Sunday night showed that she only has more potential as a performer. Maybe she'll showcase it at her third consecutive Bonnaroo next year. 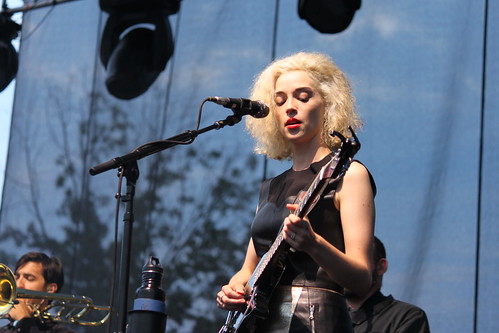 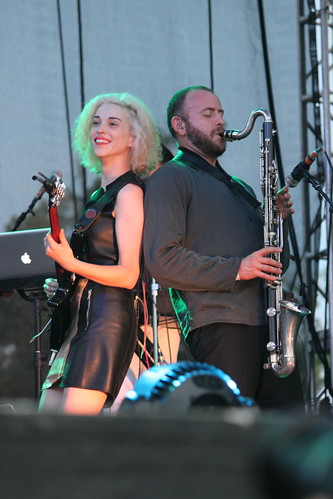 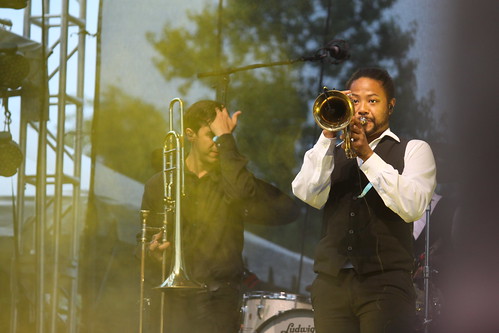 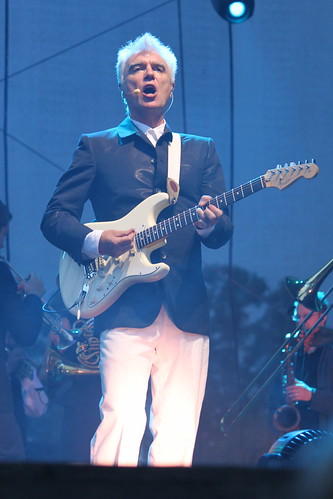 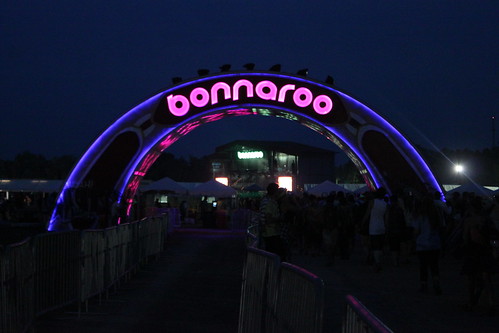 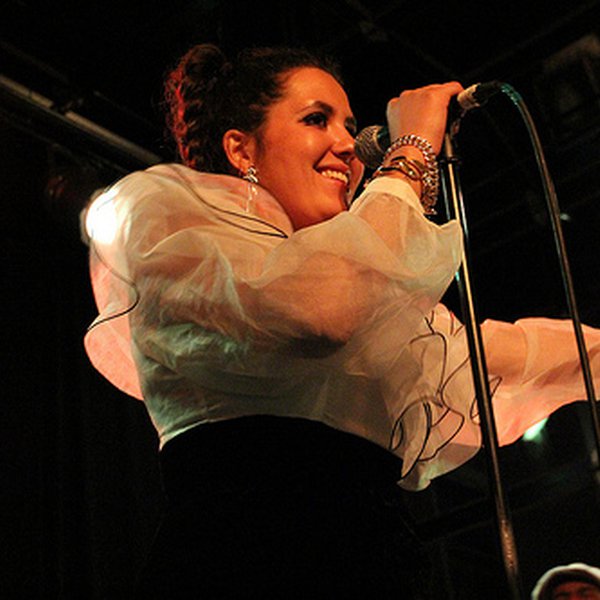 Hot on the heels of the release of excellent new album Avalanche, Danish soul duo Quadron are touring the states and bringing the marvelous combination of Robin Hannibal's production and Coco O's angelic voice to the stage. While Hannibal was not on stage with Coco and the band, their tunes still... 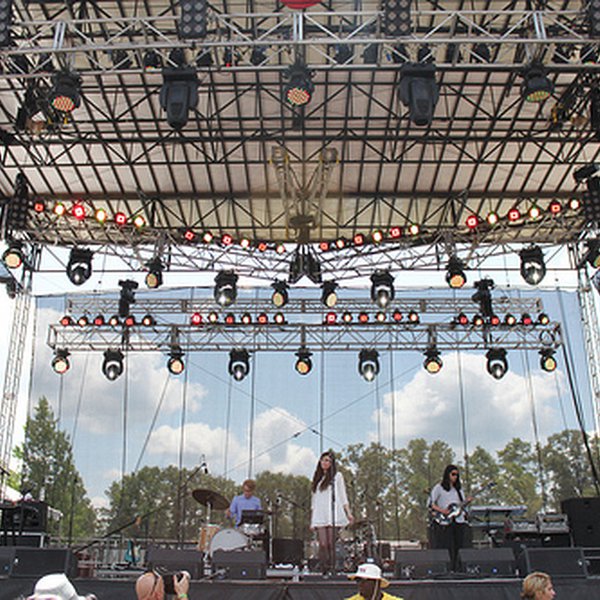 More than any other day, Saturday at Bonnaroo was filled with things that could only really happen at the Farm, among them, Björk's jellyfish facemask thing, R. Kelly entering on a boom crane, a 5k at 9 in the morning (in 80 degree heat), and a moment where Jim James, R. Kelly, Billy Idol, and Jo...