Every Monday through Friday, we deliver a different song as part of our Song of the Day podcast subscription. This podcast features exclusive KEXP in-studio performances, unreleased songs, and recordings from independent artists that our DJs think you should hear. Today’s song, selected by Midday Show host Cheryl Waters, is "Haolam Avad Mizman" by Vaadat Charigim from the 2013 album The World Is Well Lost on Anova / Burger Records.

KEXP listeners will find Vaadat Charigim oddly surprising. Like many new bands releasing albums these days, their songs' hooky melodies draw heavily from the 80's and 90's, ranging from hazy MBV-esque shoegaze to jangly New Order-influenced New Wave, but American listeners wanting to sing along will be immediately confounded, as the Israeli band sings distinctly in Hebrew. Vaadat Charigrim, ועדת חריגים in Hebrew, translates to the "Exceptions Committee", like the kind you might find at a university, who deal with underachievers. A twist upon their name, Vaadat Charigrim rather excels at placing their songs before an international audience. And their debut, The World Is Well Lost, is an instantly appealing calling card. The Tel Aviv trio, consisting of guitarist and vocalist Juval Haring, bassist Dan Fabian Bloch and drummer Yuval Guttman, compose lush arrangements that place the vocals in par with the other instruments so deftly that listeners not fluent in Hebrew might not even wonder at the songs' meanings. But, after all, how deep are the lyrics of other shoegaze bands anyway? What does My Bloody Valentine even sing about? As Sigur Rós has shown, if the songs are engaging enough, the lyrical content itself matters little. Is Hebrew the new Icelandic, as one blog asks? It's hard to say, and certainly there aren't enough bands bubbling to the surface in Israel right now to match that small island's prodigious output, but Vaadat Charigrim's songs are compelling enough to break any language barrier for anyone one willing to give them a listen.

To get to know a bit more about the band and the members themselves, we asked them a few questions:

How and when did you you three meet?

The songs were written in Berlin in 2012, recorded there as demos on 1/4" tape by Juval Haring, and sent to Israel to Dan Bloch and Yuval Guttman before actually meeting. We all know each other from the tiny Tel Aviv scene. Juval had been in a lo fi label called Pit/Kit alongside Yuval and Dan has been in bands for the past decade, as have Juval and Yuval. We all knew each other from just hanging out in the same places, being around the same people. Ten years ago there wasnt much of an "Indie Scene", so anyone who was into four track recording, or noisey guitars knew each other.

How did you get connected with Burger Records?

Simply sent a demo. This whole "unsolicited material" mess the internet age has gotten us into caused a great big number of previously "ears to the street' labels to stop listening (mainly because of the sheer mass of music made today). Burger are the absolute opposite. I think their tape method allows them to take the old school risks labels used to take, and for that reason, they are way more diverse, way more "now". I'd also like to mention that Warm Ratio, a new label out of Indianapolis, will be doing our vinyl.

What drew you to this sort of 80’s post-punk sound? Is it popular in Isreal?

Yes. historically it is where distortion came into be in Israel. Before the 80s, there were a few rock bands (in the 60s and 70s) who had a bit of a fuzzy aesthetic, but not really, nothing into proportions of what was going on at the same time in UK or USA. The Israeli mainstream ear had always been very "easy listening". So in the 80s there was some more room for experimentation, a very big, UK influenced youthmovement. We connect with this sound in the hopes of connecting with our locality. Too many times, Israeli bands looking outward to succeed or "make it" in the USA/Europe, attempt a sort of mimesis, or try to seem more "international". We do the same only we look to our local history and try to bring it out. This is why we have tapped into this sound. It resonates not only sonically, but also historically. We draw influence from Ride, but also from Plastic Venus and Minimal Compact.

Do you get out of Tel Aviv much?

We have played shows in Haifa at a great place called Syrup that just opened up and even hosts bands from overseas like Night Beats and Cloud Nothings. In Jerusalem, we play at Uganda, which is a combination bar, record store and small venue. There really isn't much proper touring to do in such a small country, and the Indie scene is largley centered in Tel Aviv, for absolutely no apparent reason. The rent is way too high, living there is way too expenssive, but still Tel Aviv is the center of everything cultural. I hope that will change in the future.

Are you getting airplay or do you tour in any other countries? Any plans to come to America?

We actually got into rotation at Austria's biggest alternative radio, FM4. We were in rotation for months! Our first tour will be SXSW 2014. We wil probably just play in Austin as part of the festival. Then later in 2014, we will probably do a bigger tour in Europe, which is closer and financially safer. We would love to tour the States as much as possible but that really depends on interest in our project from booking agents, festival organizers etc, who we might meet in March.

Are you working on more music?

Always. We are currently working on a movie score. We are very interested in narratives. The first album has a story, and what we are doing now is looking for a new story to tell.

Hopefully, Vaadat Charigrim will be able to add more dates to their planned SXSW 2014 appearance, but until then, keep checking their Facebook page for more music and updates. For now, here's a live performance video of their song "Kezef Al Hamayim", which they debuted earlier this month: 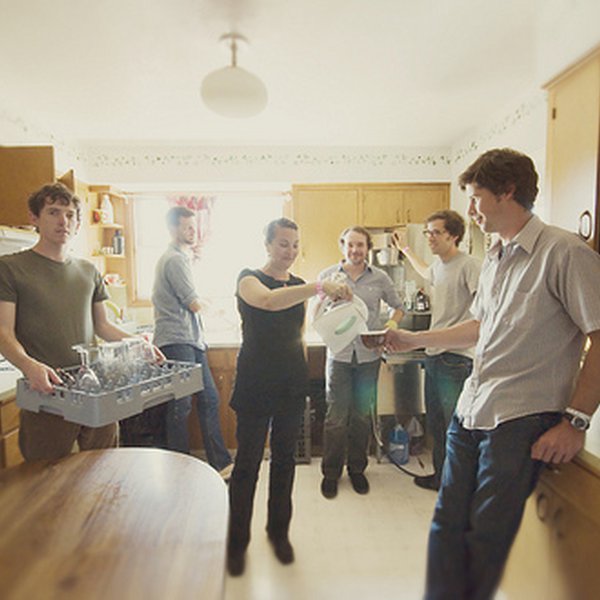 Song of the Day: Ages and Ages - Divisionary (Do the Right Thing)

Every Monday through Friday, we deliver a different song as part of our Song of the Day podcast subscription. This podcast features exclusive KEXP in-studio performances, unreleased songs, and recordings from independent artists that our DJs think you should hear. Today’s song is “Divisionary (Do... Song of the Day: Shearwater - A Wake For The Minotaur

Every Monday through Friday, we deliver a different song as part of our Song of the Day podcast subscription. This podcast features exclusive KEXP in-studio performances, unreleased songs, and recordings from independent artists that our DJs think you should hear. Today’s song, selected by Midday...