No one knew it at the time, but Saturday would be the end of Austin City Limits 2013. Rain had been threatening all weekend, and around 9:45 p.m., it finally showed up, and as of Sunday morning, it hasn't left. That being said, Saturday would have been a hard day to top. The weather was (mostly) warm, the bands were all on spot, and the food remained great. ACL is among the smoothest run festivals in the country, and everything from food to beer to getting a good viewing spot felt easy. That might be why at the end of two days, the weekend still felt complete. Maybe next year the rain will stay away. 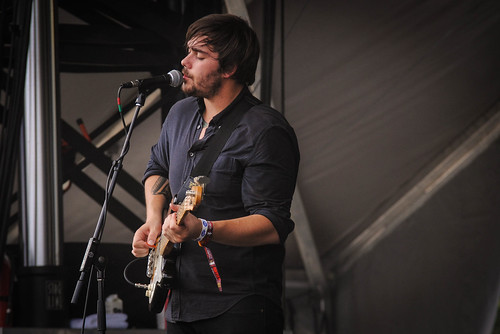 Like Wild Nothing the day before, Parquet Courts were given the task of waking up Zilker Park, and maybe because their music is somewhat more energetic than Wild Nothing’s, they were more successful in getting Austin moving before noon. Being local favorites, they had a larger and more interactive crowd to work with than most bands playing at noon, but it didn't seem to phase the band as they played through most of their catalog in their 45 minutes of stage time. “Borrowed Time” and “Master of My Craft” were early highlights of the day, as was material from the recently released Tally All The Things You Broke EP, but the set peaked with closing tune “Stoned and Starving”, after which more than a few audience members appropriately headed towards the food vendor area. 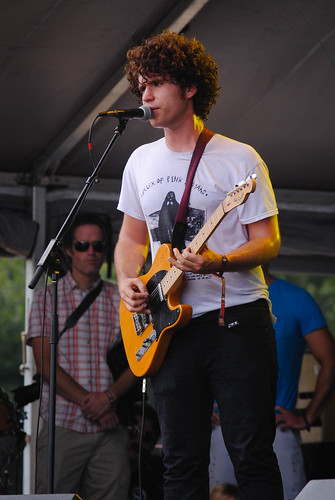 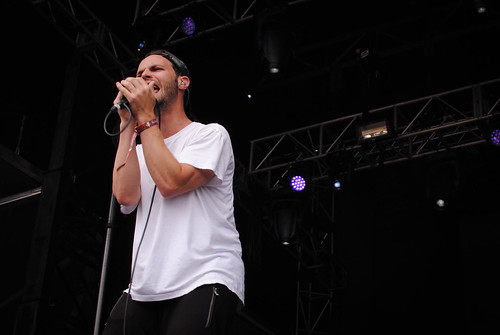 Autre Ne Veut's Anxiety was an early 2013 favorite not in the least because it showcased the full potential of NYC songwriter Arthur Ashin's ability to capture his battle with anxiety in R&B-influenced electronic jams. But if he's a precise studio creator, Ashin is a curious frontman. His stage presence shifts unpredictably between pacing tensely around the stage and statically facing the audience with his arms wide open. Fortunately, Ashin has given himself an onstage foil - the cool and collected Cristi Jo Zambri - to flesh out his live show. The two's chemistry was evident only halfway through set-opener "Play By Play", and set the pace for the rest of the 40 minute show. Ashin didn't stand still for nearly the entire set, his voice frequently jumping from his high to low registers, but Zambri was placed squarely at her station, playing keys and triggering samples. By the time the set closed (and peaked) with "Counting", the two had created enough tension to make Anxiety - not an album with subject matter particularly amiable to festival crowds - a fascinating display. 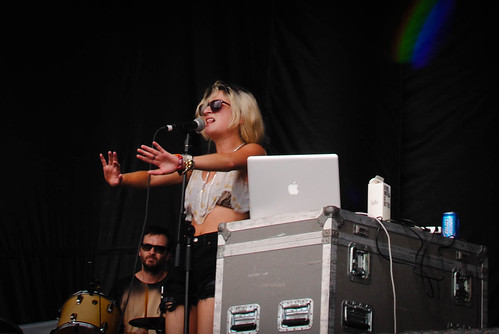 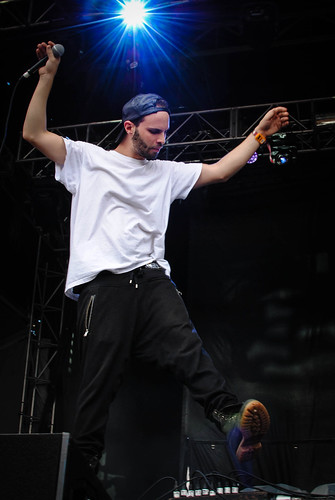 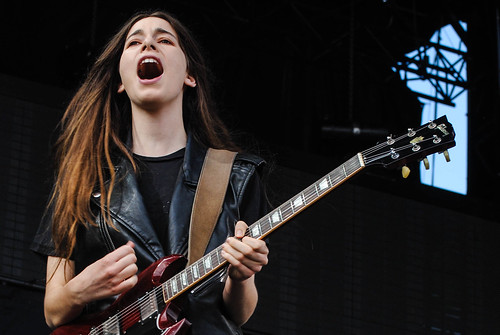 It’s been about two weeks since HAIM’s debut album, the excellent Days Are Gone, dropped, and it’s catapulted Danielle, Este, and Alana into next-big-thing status. They’ve been cutting their teeth on the European festival circuit two summers in a row though, so their newfound prominence made their ACL set less of a test and more of a coronation. A lot of the new Days Are Gone material has yet to make it into the set, but when you have a live show as tight and effective as the one the sisters Haim boast, it’s hard to argue against it. Drawing the biggest crowd of the day to that point, HAIM’s performance felt like a precursor to something bigger; a preview of even bigger and better things to come from the trio. 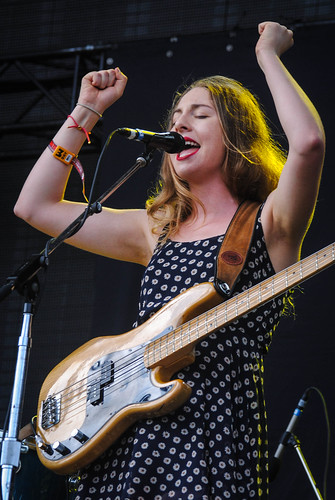 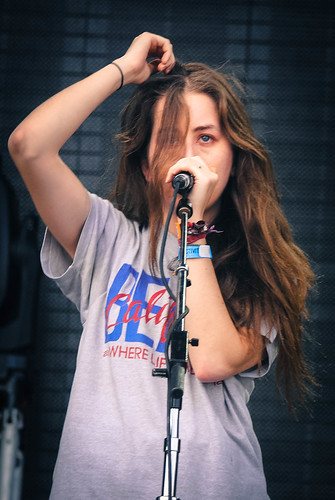 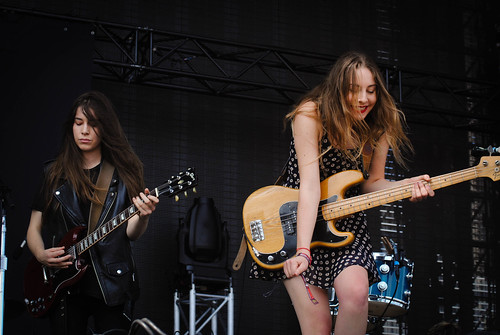 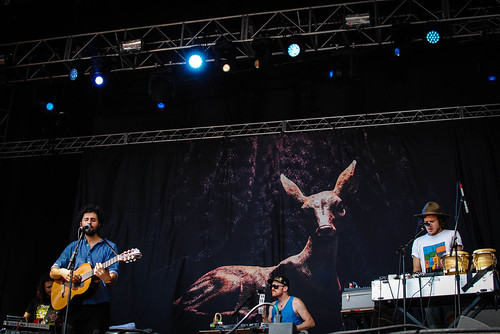 When Jose Gonzalez and the rest of Junip emerged onstage, the Swedish singer merely said, “We are Junip from Sweden. Thank you for coming”, and then proceeded to say virtually nothing else the entire time. Gonzalez’ relative silence and Junip’s nuanced folk rock was a little jarring for those who were expecting anyone to follow HAIM’s lead, but when a band plays at 3:00 p.m. in strong sunlight, they only have one other option besides being extra talkative if they want to hold an audience’s attention: shut up and play, which is what Junip did, running through most of their self-titled album and scattered cuts from their catalog without much pause. From a distance, the audience may have looked sedate, but it was more entrancing than sleep-inducing, and in a pop culture moment, “Line Of Fire” was recognized by more than a few audience members as “that Breaking Bad song.” 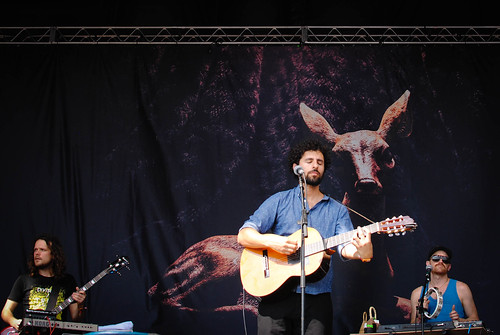 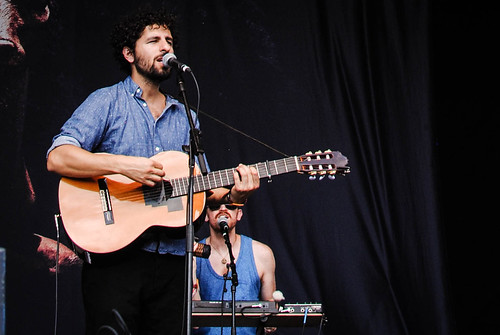 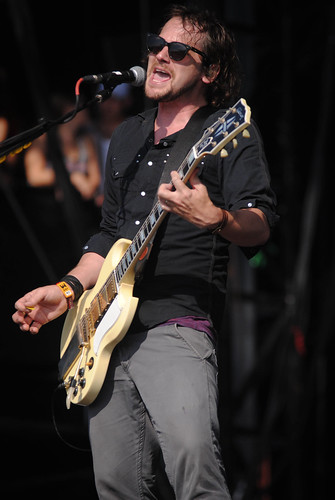 A running theme at Austin City Limits is that a lot of the bands playing are also ending either legs or entire tours in Zilker Park. Silversun Pickups fell into the latter category, as frontman Brian Aubert noted four songs into the band’s career-spanning cap. The Silverlake quartet seemed equally as excited to be playing their last foreseeable show as they were to be done with the tour, so it’s not too surprising that they interacted with the audience less than usual (Aubert did mention how the sun was directly facing him and that he “wore this black shirt so I could suffer with you guys”) and played a set leaning on more catalog material. Aside from dealing with the day’s first major sound problems (Aubert’s guitar fell steeply in the mix for the set’s middle third), Silversun Pickups’ set was a successful end to the Neck of the Woods album cycle that showed a band pushing out their last burst of energy before they returned to Los Angeles to start the next album. 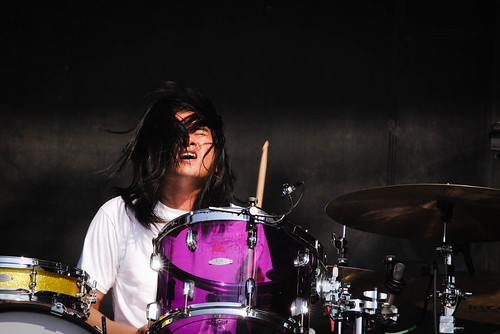 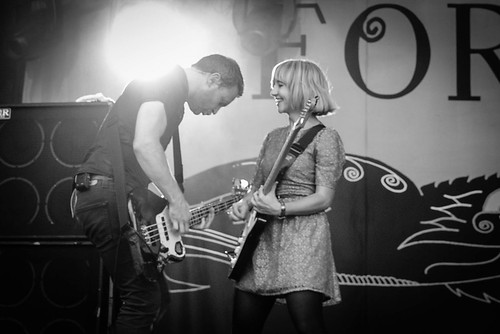 Ever since they emerged in 2009, The Joy Formidable have been one of the most dependable festival bands on the circuit. They’re loud, have plenty of immediate songs, and aren’t afraid to break a sweat (or a guitar) to get the job done. Ritzy Bryan remains a one-woman guitar army, and the rhythm section – drummer Matt Thomas and bassist Rhydian Dafydd – are more ferocious than ever on the low end. Since beginning the tour in January, they’ve figured out which Wolf’s Law sound best live – “Cholla”, “Maw Maw Song”, “This Ladder Is Ours” – and still have a few can’t miss shots (“Austere”, “Cradle”) to spare. The trio saved their best trick for last though. After leading the audience into taking a breather by playing “Silent Treatment”, the band’s softest and most gorgeous track to date, they launched into a nearly 10-minute version of “Whirring” that ended with Bryan wearing an audience member’s hat on her head. They’re nearly done with touring for the time being, but even if they decide to go back out on the road before their third record is out, they’ll surely be primed to give another jaw-dropping set. 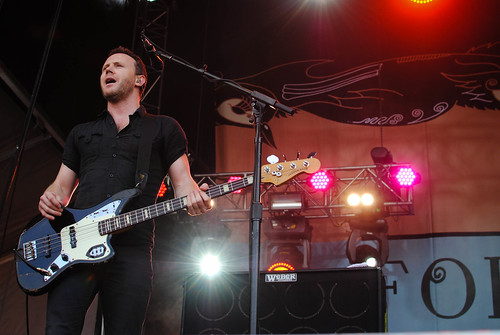 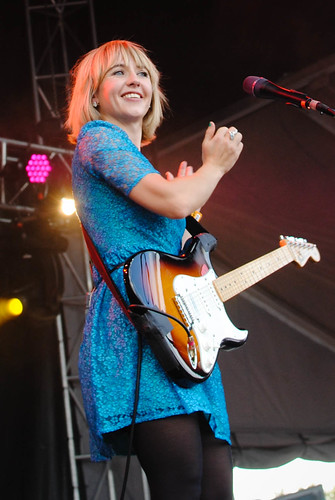 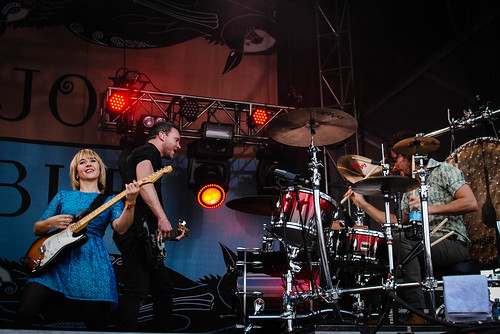 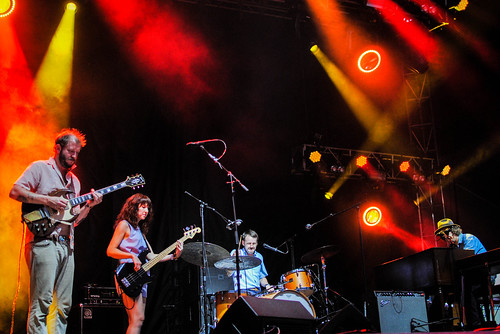 Even for a guy who sincerely proclaimed he “was on some Ticonderoga shit” on his last record, The Shouting Matches was probably the least typical of Justin Vernon’s projects. His last two albums were the labored, capital-A art records Bon Iver, Bon Iver and Unpave. Conversely, Grownass Man is literally Vernon and two of his buddies - Brian Moen and Phil Cook – playing straightforward blues rock, so it was interesting to see a typically serious, studio-intensive artist like Vernon simply kick around onstage in between beers. Accordingly, The Shouting Matches’ set was the antithesis of the highly rehearsed Bon Iver and Volcano Choir – loose, off-the-cuff, and unabashedly fun. It’s a shame the trio don’t hit the road more often, because they’re in the enviable position of getting paid to just goof around onstage, and, even more enviably, they’re really good at goofing around onstage. 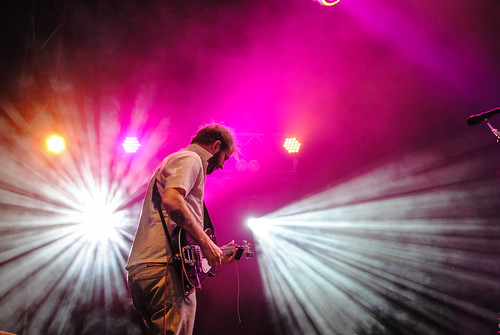 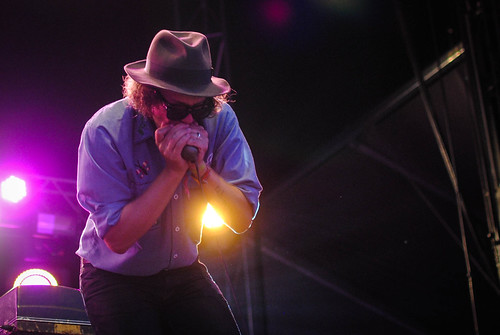 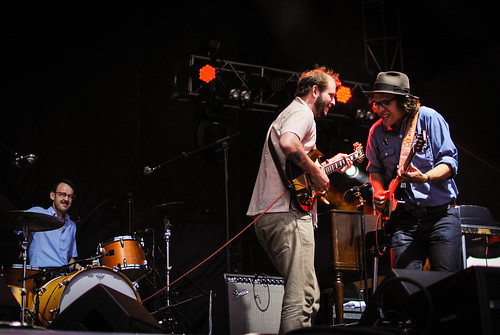 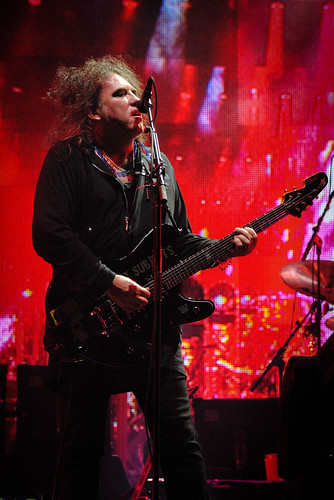 Since the Cure have ceased recording for the time being, they must have a lot of time to rehearse, because if there was a band that came to ACL with nothing to prove, but played a jaw-dropping set just because they could, it was the English quintets. The disorienting, unpredictable setlist was filled with hits, deep cuts, and plenty of Disintegration. Robert Smith made a wise decision to refit the band with second guitarist Reeves Gabrels last year, along with the reintroduction of keyboardist Roger O’Donnell in 2011, because now that they’re back in quintet configuration, they’ve got the manpower to perform the Cure’s massive catalog with the sonic depth it deserves. The only bummer about the Cure's set was the unceremonious finale. After breaking festival curfews like clockwork for close to four years, the Cure's run finally ended on Sunday night when they had the plug pulled on them halfway through set-closer "Boys Don't Cry" promptly at 10:00. It ended abruptly, but the Cure's (unintentional) festival closing set was among the weekend's best, and it might have just been the rain, but there were plenty of boys (and girls) crying for a solid two hours in Zilker Park. 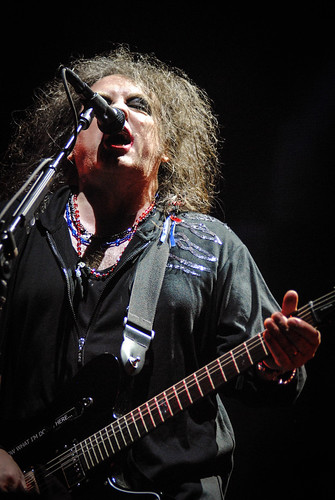 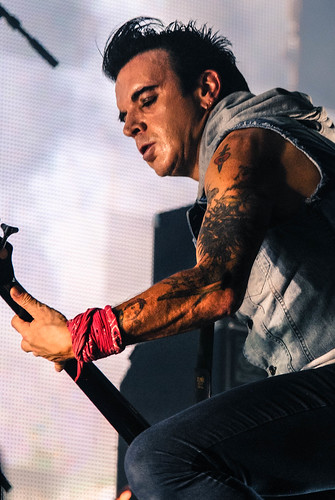 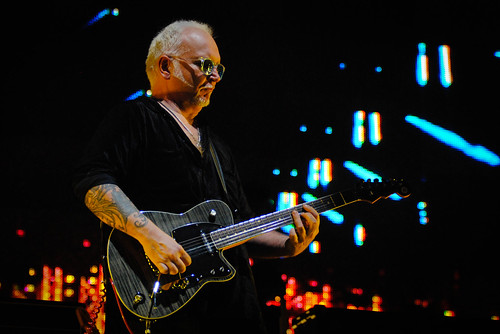 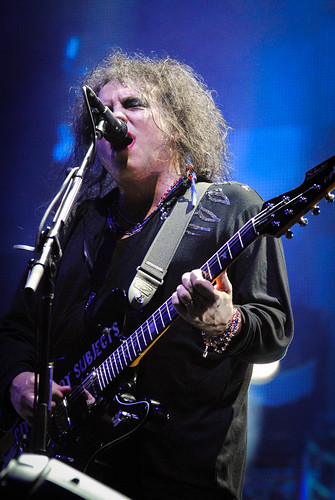 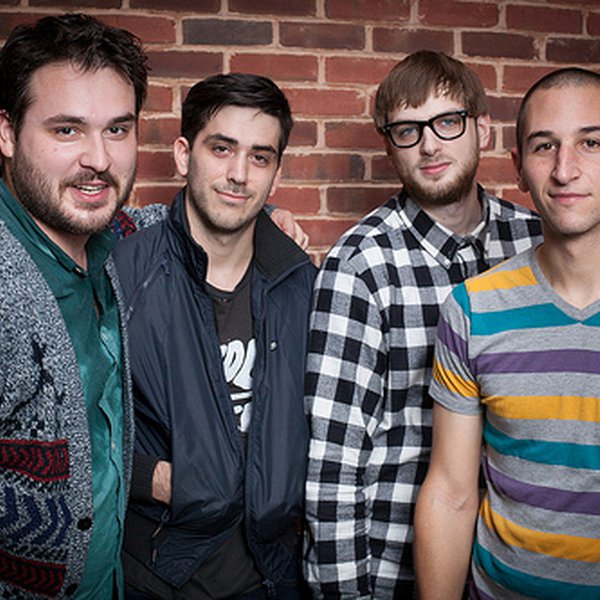 Well, that was a sure way to wake up the neighborhood! Kicking off KEXP's 2013 CMJ broadcast was New York's own Bear Ceuse, a band whose pounding drums, searing guitars, and loud, belted vocals definitely woke up the group of caffeinated New Yorkers who gathered at Judson Memorial Church for thei...

Although it might shift to include Sasquatch and Governor’s Ball next year, there are essentially four music festivals that form the festival season narrative in 2013. Typically, Coachella sets the bar for the rest of the year in April, Bonnaroo and Lollapalooza try and outdo it through sheer siz...