Project Pabst, Day 1: Against Me!, TV On The Radio, Blondie

For years, Against Me! frontwoman Laura Jane Grace stood in center stage at raged away, sometimes at others, sometimes at herself. When she came out as transgender in 2012, that fury subsequently turned to a newfound onstage fire, transforming the flagging band from an increasingly cult concern to one of the most important bands of the moment with the brilliant Transgender Dysphoria Blues. Grace and her bandmates have been on the road more or less nonstop since the album's January 2014 release, but they hardly seem tired. Arriving onstage with little more than a greeting, the band – Grace, longtime guitarist James Bowman, veteran punk drummer Atom Willard, and human ball of energy/bassist Inge Johansson – ripped through "True Trans Soul Rebel", and then proceeded to transition seamlessly into "Unconditional Love" without breaking a sweat. And after that song was finished, they seamlessly transitioned into another song. And another after that. This happened for a full sixty minutes, as the Gainesville, Florida band ran through a succinct overview of their increasingly revered discography. Touching on all the staples ("Don't Lose Touch", "Cliche Guevara", "Pints of Guinness Make You Strong", "Thrash Unreal") and future classics (anything off of Transgender, but especially set- and album-closer "Black Me Out"), Against Me's afternoon set was just one more victorious battle in Laura Jane Grace's not-so-quiet revolution. 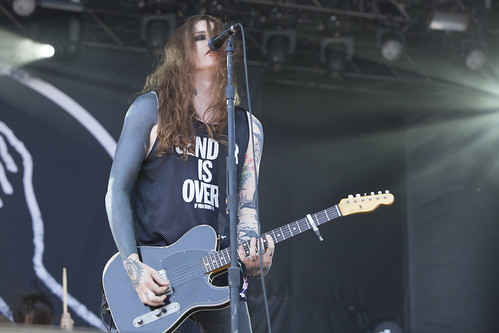 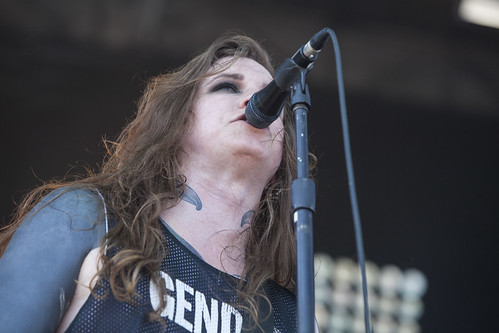 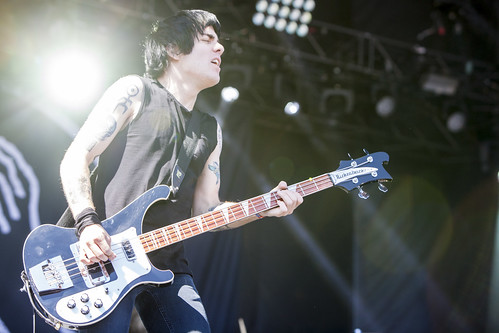 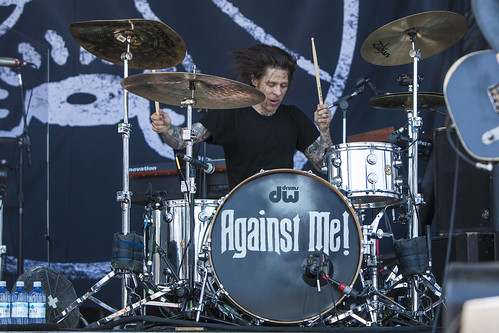 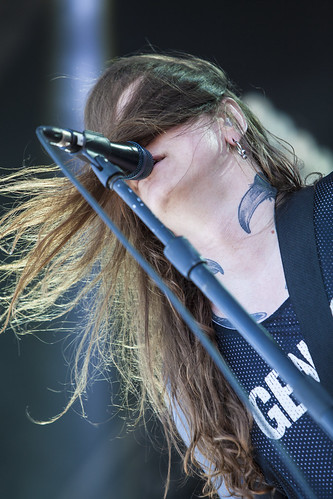 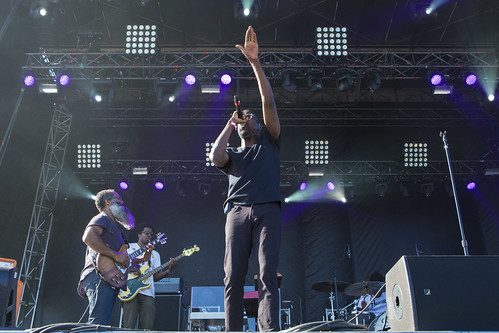 TV on the Radio have been in the upper tier of critical darling rock bands for a little over a decade now, but even though they have a commendable legacy that they could ride out for another festival tours, they've admirably chosen to come back from a tragedy-imposed break with their most lively, direct album to date, Seeds. The death of bassist Gerard Smith hangs over Seeds, but in the sense that it's made the band's remaining members dive headfirst into a new approach to living life to the fullest. The onstage sextet drove through a handful of Seeds' louder, more direct tracks before diving deep into the TVOTR catalog for a hit parade few bands of the '00s could rival, including "Wolf Like Me", "Golden Age", "Dancing Choose", "Young Liars", and "Staring at the Sun". Tunde Adebimpe might be reaching a new peak as a frontman, drawing in the crowd with his frenzied delivery and still powerful voice, despite facing a near 100º afternoon. (There will be no "Staring at the Sun" joke here.) As the tour behind Seeds winds down, TV on the Radio are a million miles away from where they were a few years back: powerful, directed, and full of hope once again. 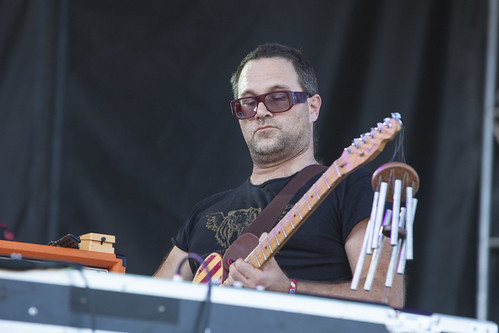 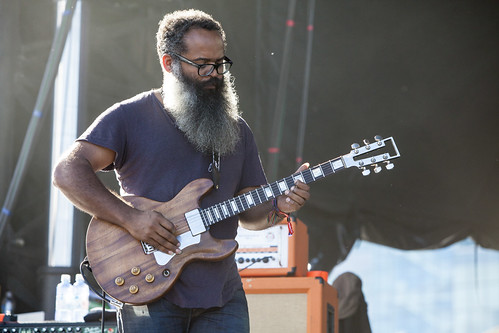 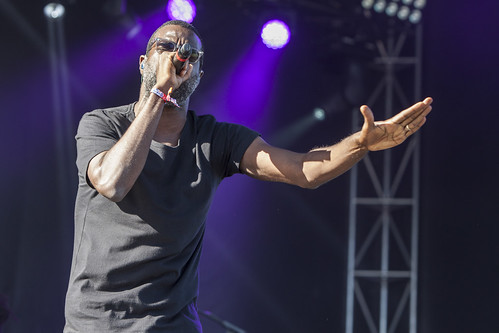 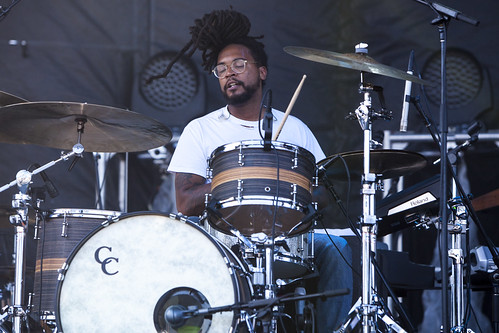 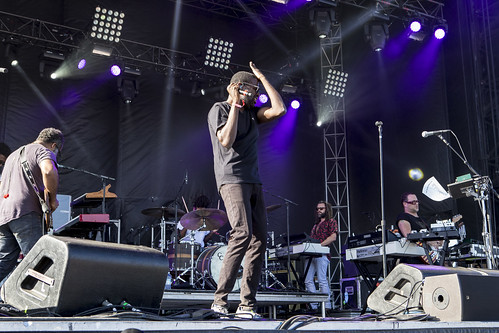 As Debbie Harry, 70, takes the stage in a hot pink dress in 95º weather and begins singing "One Way Or Another" as the sun sets across the Portland skyline, it is absolutely baffling as to why more festivals haven't booked Blondie. The New York punk legends have a pretty big slate of hits – The Best of Blondie is one of the best single-disc rock compilations, full stop, and they play most of it onstage every night – delivered by an age-defying frontwoman and some new material that sounds better than you'd expect, not in the least because of Harry. Just as charming and effervescent as she was in 1979, Harry stands as a perfect ideal of how musicians should age: not afraid to reference past achievements while staying completely focused on the present, perfectly walking the line between artsy seriousness and fun-loving charisma. Half of Blondie's lineup was playing with Harry in 1977, and the other half have come in at some point since the band's 1997 reunion, but they're a formidable unit, well-rehearsed and with a surprising amount of showmanship (it takes some gall to bust out a keytar solo on "Call Me" and then nail it). Watching the crowd light up every time the first notes of one of the band's many hits rang out over Zidell Yards, Harry (who playfully gave shoutouts to Against Me! and TV on the Radio, as well as yelling "420" after a snippet of the Beastie Boys' "Fight For Your Right (To Party)") and the boys were a surprise when they were announced at the top of the festival's lineup, and their closing performance stood as a benchmark not just for the other major heritage act (Sunday's sub-headlining set from the Buzzcocks), but for the younger bands as well. Just like they did with their choice of Tears For Fears last year, Project Pabst should be commended for booking a well-loved and still-great heritage act: your move, Bonnaroo, Coachella, etc. 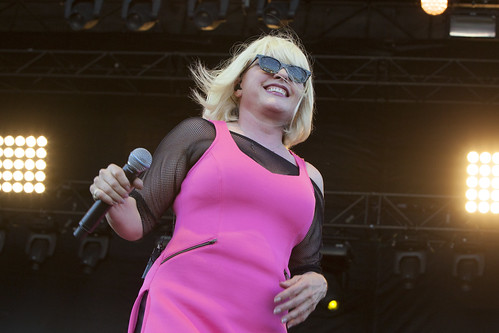 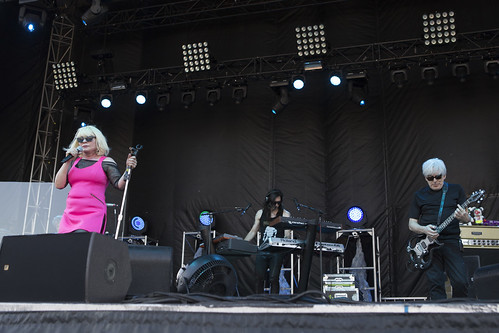 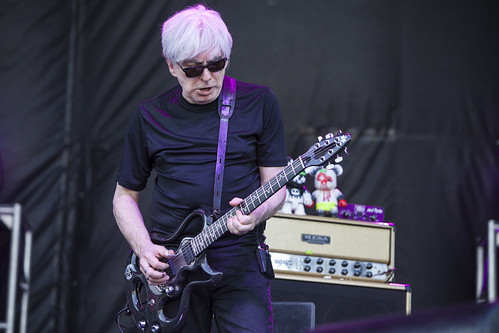 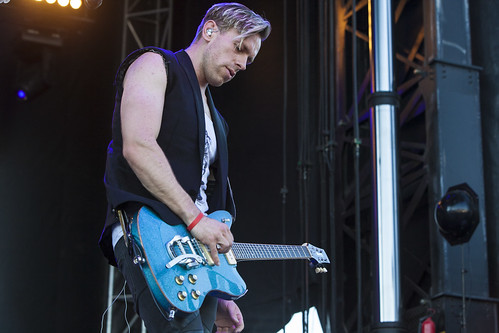 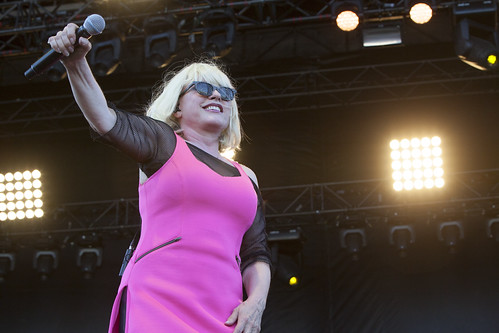 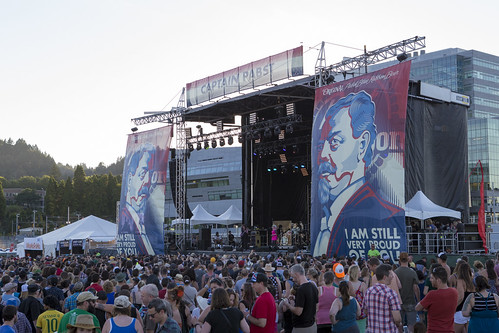 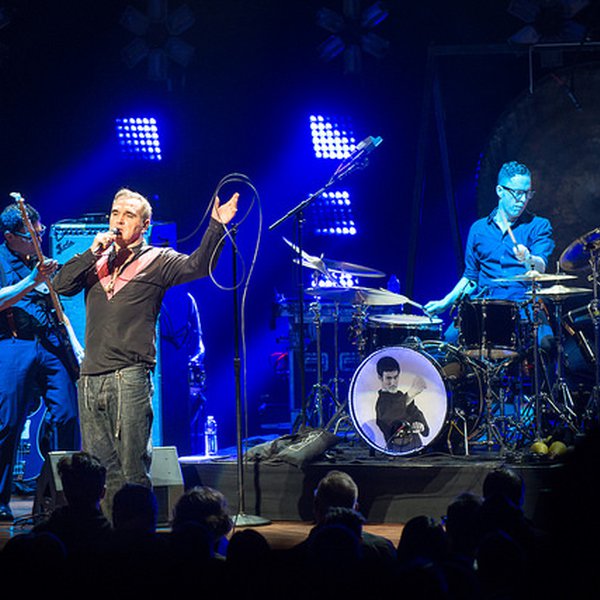 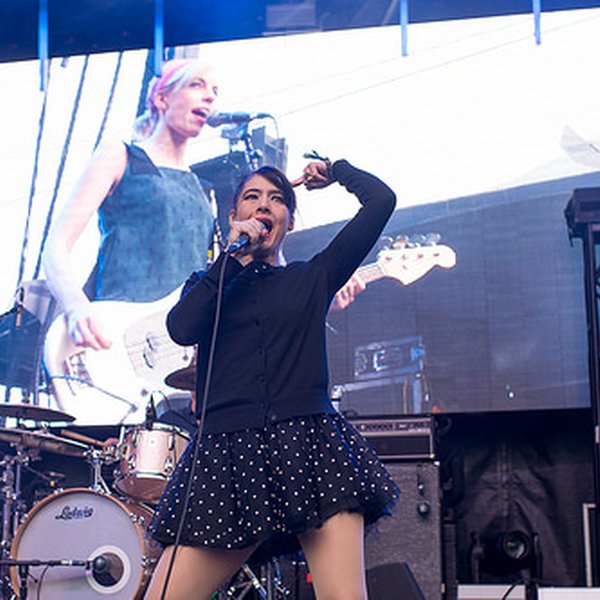 Playing while it's raining at a festival is always a gamble. Lots of people who would have otherwise wandered over out of curiosity are hiding out in every covered nook and cranny imaginable, so it was only the diehards waiting in the drizzle for The Julie Ruin's mid-afternoon set. But, to be hon...