Live Review: Lord Huron with Cayucas at Showbox at the Market 4/18/15

It was hard not to anticipate what Lord Huron would bring to the live setting. So much of their music is based around place and themes that a live show always seemed like the perfect medium for the group to express their vision to the fullest. The LA group makes music that transports the listener to distant lands and takes them on journeys to places never ventured to before. The accompanying media for their new album, Strange Trails, is impressive, making it one of the few albums that can boast that it’s supported by a comic book and features songs about an apocalyptic gang of bikers. Last Saturday night, fans followed Lord Huron to Seattle's Showbox at the Market to hear more of their weathered and weary, yet entirely engaging, folk-pop sound.

Fellow So Cal band Cayucas opened up the night with an energetic set. You might remember their "Vampire Weekend under a West Coast sun" aesthetic from their 2013 album, Bigfoot. What the somewhat stoic five piece lacked in stage presence, they made up for with a set of dreamy, sunny songs full of “wo-oooh’s” and “oo-eee-oo’s.” They are keeping great company (they also toured with Broken Bells) and it shows in their execution. If they can add a little more flavor to their stage banter and presence, Cayucas could return as the next big indie darling band before too long. Overall, while Their music was much more beach washed than Lord Huron’s, their shared characteristics were traceable, and they set the tone well for the main act.Cayucas: 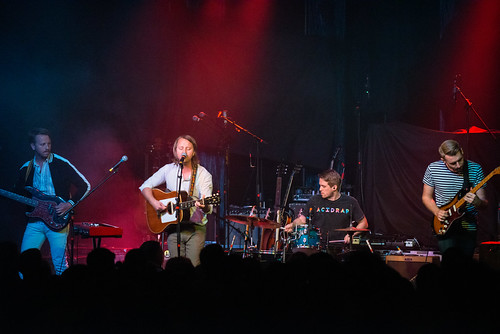 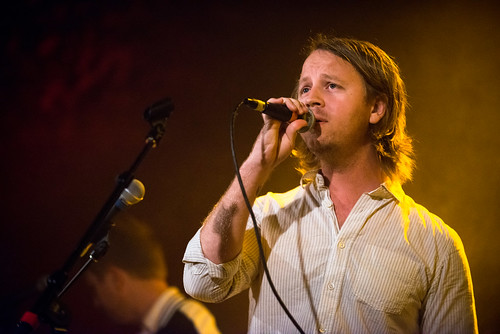 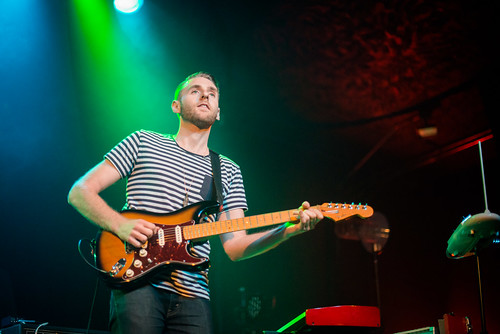 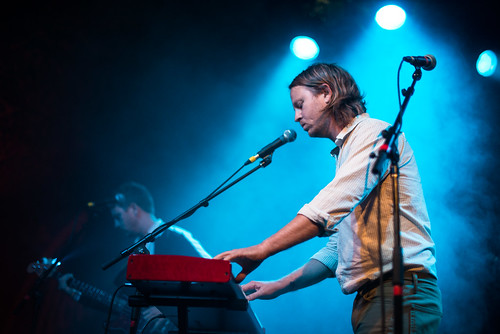 Lord Huron's Ben Schneider and crew have proved their expert craftsmanship of the thematic album twice now, so I was curious to see how they would convey the apocalyptic theme of Strange Trails in a live setting. The danger with thematic albums, though is that there's often a very thin line between gimmicky and visually compelling. At first glance, it seemed like Lord Huron had crossed into gimmick territory. Bright neon lettering of “Strange Trails” accompanied with a skull clashed with an old radio playing out fuzz and distant ramblings of undistinguishable content. It seemed very loud and obvious for a band that makes such a commitment to the visual side of things. But what would seem to be an assortment of random cheap gimmicks at the beginning of the set made complete sense by the time the group left the stage a good 90 minutes later.

Lord Huron is often so good at layering sounds that it becomes hard to distinguish what contributions by which band members are being made to the sonic body. There were many times throughout the night, when a look around the stage resulted in a discovery of some sort. A theremin made a guest appearance, and not one or two, but three guitars were used to their full potential in a supposedly “indie-folk” outfit. Whether or not these moments were simply telling of my bad ear or a tribute to the bands cohesive sound, it showed why Lord Huron has been finding such success. Yes, they have big choruses and songs full of hand-clapping, but they do it in a refreshingly creative and original way.

The band ventured through their set with workman-like pace. There was little time for stage banter, but that was fine, as the band was able to play through their new album and hit on fan favorites from their first album. Lord Huron plays music that often gives off a very western vibe. As the harmonica playing and hand clapping reached an apex, it became clear that this was music that is easy to take for granted. But with the ability to see the physical manifestations of the music along with the bright neon sign and radio, the complexity of Ben Schneider’s vision began to show. Much like how Lord Huron’s music transcends time, pairing folk, hints of surf and electronic elements together, the live visuals clashed old and new with the pairing of the radio and bright sign. For a band that seems to be so inspired by location and adventure, they seemed to know exactly where they were. As Lord Huron finished their encore and left the stage to radio static and neon lettering, it all fell into place. Sometimes a band needs to hit the audience with something obvious to remind it that something subtly unique is occurring. Listen to Lord Huron through headphones, and it is clear they make good, catchy, indie folk. But observe their live show, and the visuals and variety of instruments in the flawless performance will remind you of what makes their style of music so good. The performance, much like the music, takes you on a dusty strange trail, regardless of if you see it at first or not. 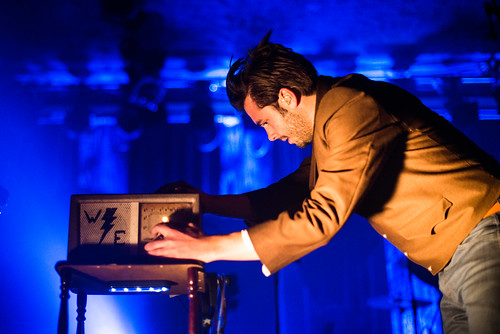 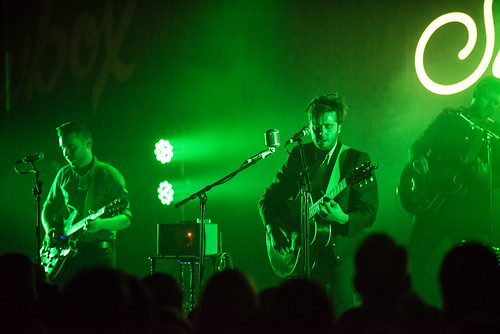 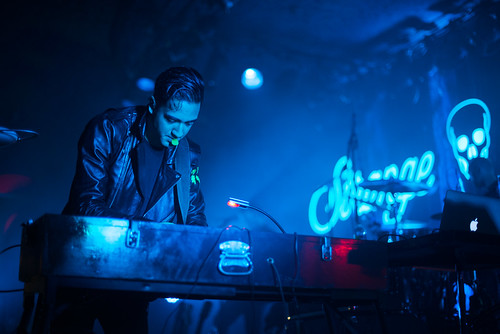 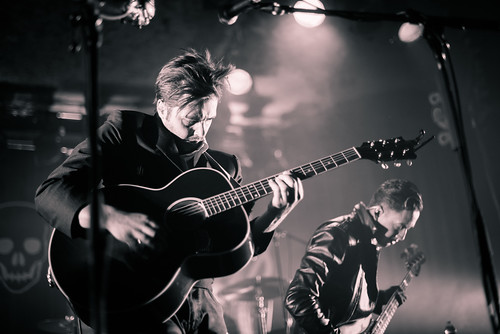 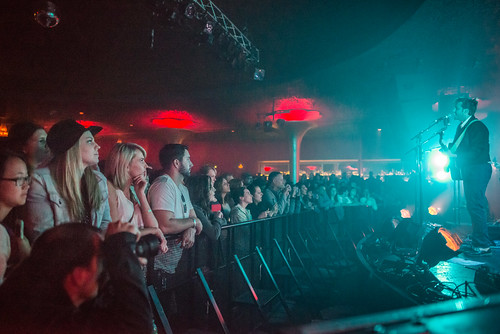 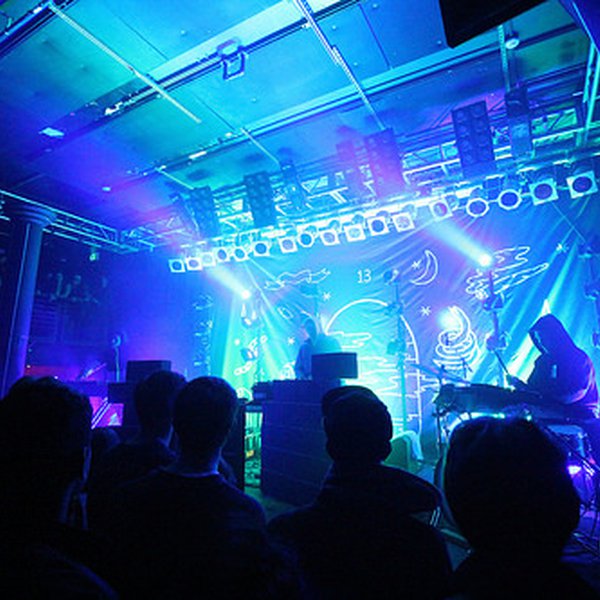 Shlohmo is one fearless dude. If there is anyone else left in the room doubting that at this point, I really think they need to come forward if for nothing else than to just have a talk. Last year, Henry Laufer dropped an EP with R&B god Jeremih on his own record label, WEDIDIT, and shared a st… 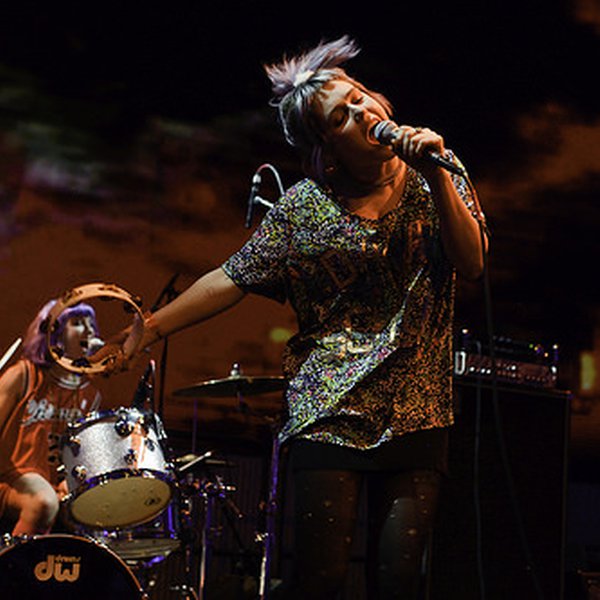 The EMP Pop Conference covers a lot of ground in its panels, discussions, and presentations – where else could you find programming covering both a Missy Elliott retrospective and a roundtable seeking to find out what the worst song ever is? – so it only makes sense that for its Seattle artist show…