Day two of Portland's first ever Project Pabst began with Portland psych-pop band Grandparents, then a Heart-meets-Led Zeppelin performance from 2014's Thelma & Louise, a.k.a. rock band Deap Vally, as well as a set from Massachusetts indie rock band Speedy Ortiz. The beer was once again aflowin' and the venue even sunnier than the previous day as throngs of hungover Portlanders and Portland visitors materialized at Zidell Yards for round two of a potent PBR meets PDX meets music concoction.

More local love came later in the afternoon from Portland's the Thermals. The post punk trio commanded the Captain Pabst stage for a rowdy afternoon performance. Frontman Hutch Harris literally got down, at one point laying on the stage during "Our Trip." Bassist Kathy Foster matched Hutch's energy on favorites like "A Pillar of Salt," and each song's ending was met with a goofy standing gesture from drummer Westin Glass.The Thermals: 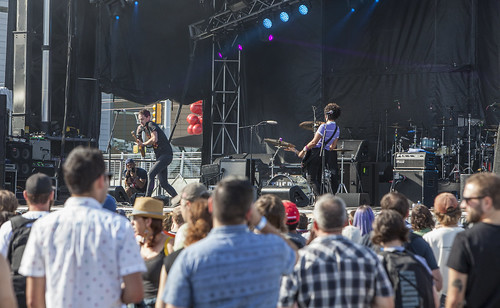 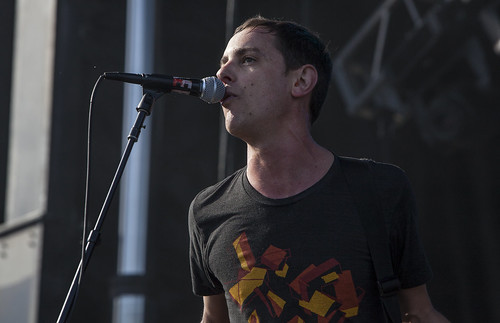 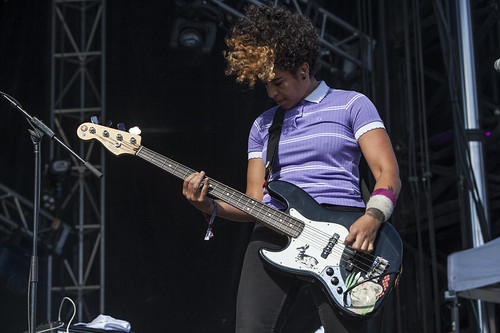 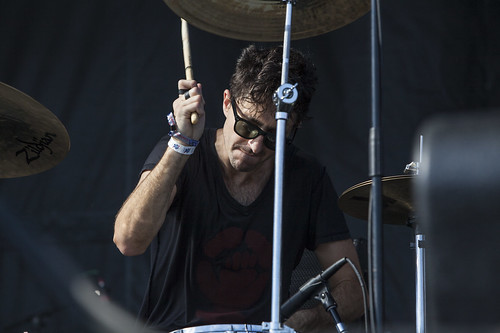 Back on the Blue Ribbon Stage, Seattle's Shabazz Palaces geared up for their performance, which quickly became a festival highlight. When Portlanders congregate in large groups (especially at music festivals) you get some pretty enviable fashion, but Ish Butler and Tendai Maraire took style to the next level as per usual – even their equipment was swathed in crazy cool prints. What came next can only be described as an onslaught of deep, nostril-shaking bass. The duo opened with "Forerunner Foray" and continued to play tracks from their latest album, Lese Majesty, including "They Come in Gold" and "#CAKE," along with plenty from Black Up like "Youlogy" and "Are You...Can You...Were You?" Behind the fabric, Tendai was hiding quite a toolkit of instruments – from maracas to congas. Brief technical difficulties aside, the duo was on point. They delivered crisp vocals and heavy, out-of-this-world beats to a similarly out-of-this-world crowd. After a shout out to Seattle, the pair closed with "Motion Sickness." 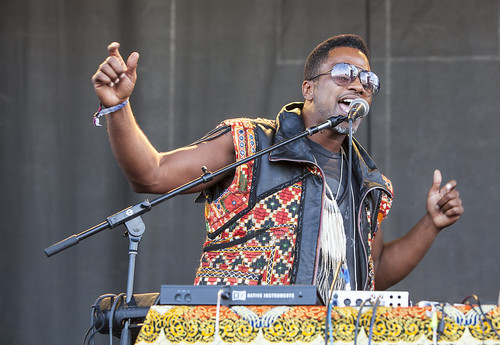 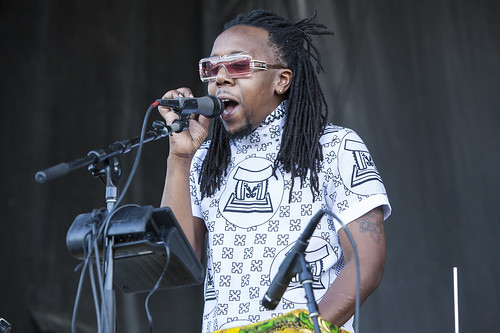 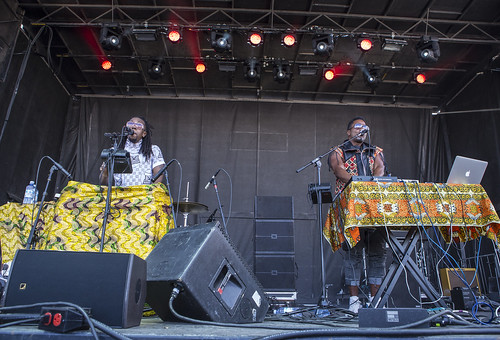 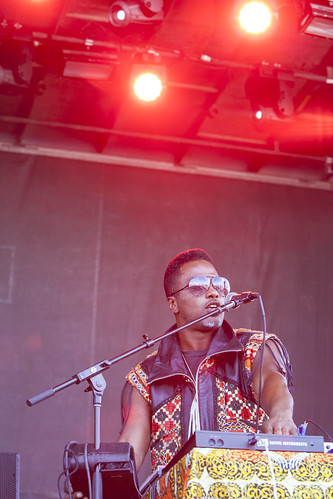 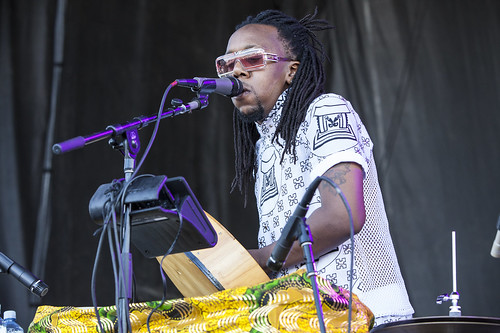 Switching things up, indie folk band Lord Huron spread out on the Captain Pabst stage with their five-member band for their afternoon set. At this point I had settled into the "grassy" (more like straw-y) area off to the side for a beer and sandwich break, happy to be sung "She Lit a Fire" and "Ends of the Earth" in the slowly setting sun. The band's live performance, thick with percussion and strings, closed with "It's Time to Run," which snapped me out of my peaceful moment in the gravelly hay with a reminder that it was time to dash over to the Blue Ribbon stage. 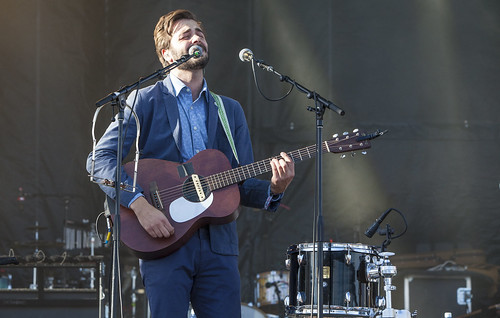 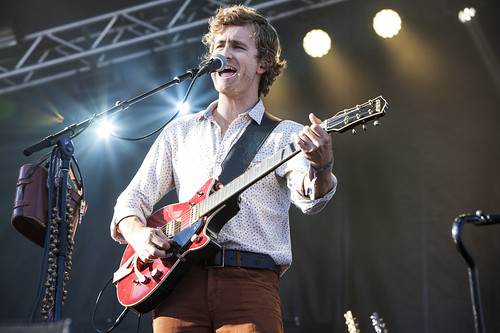 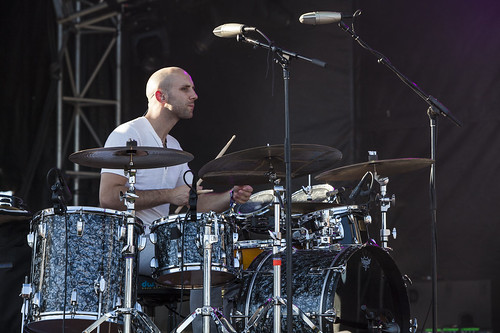 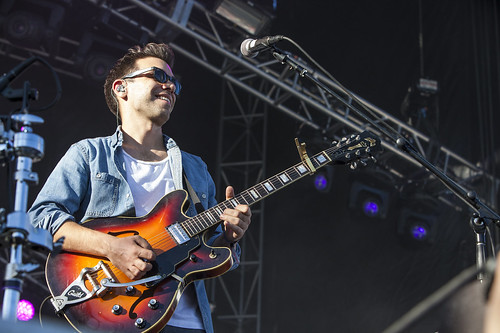 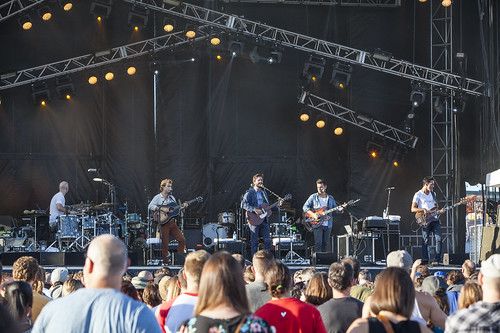 GZA, or one-ninth of "the best rap group ever," Wu-Tang Clan, may have intended to stick to his 1995 solo success Liquid Swords (the Pabst lineup even specified this), but, when confronted with a sea of Wu signs and chants of "Wu-Tang," the rapper threw a few Wu-Tang classics into his set. His lyrics brought to next level epicness by a live band, GZA had the crowd belting along to "Wu-Tang Clan Ain't Nuthing Ta Fuck Wit" and "C.R.E.A.M." A verse from late Wu-Tang co-founder Ol' Dirty Bastard's "Shimmy Shimmy Ya" sent all of the "pot smokers, beer drinkers, and chess players" in the crowd into a frenzy. Wu-Tang aside, GZA didn't neglect his solo work and even treated fans to a science lesson about the origins of the universe in fluid detail. 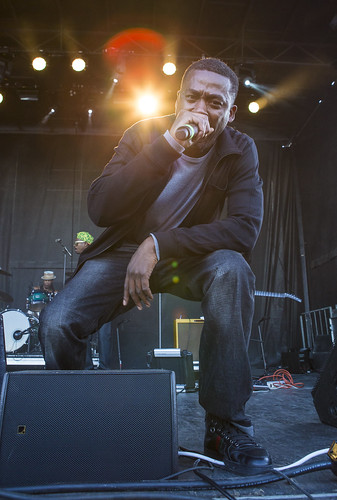 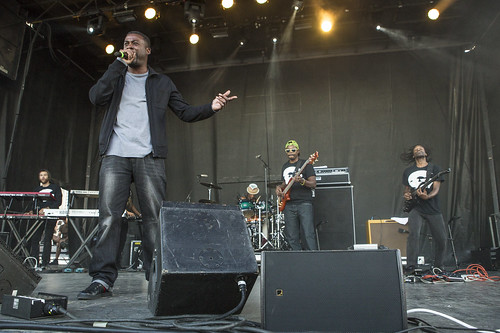 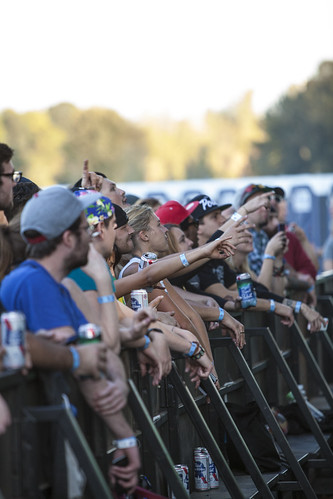 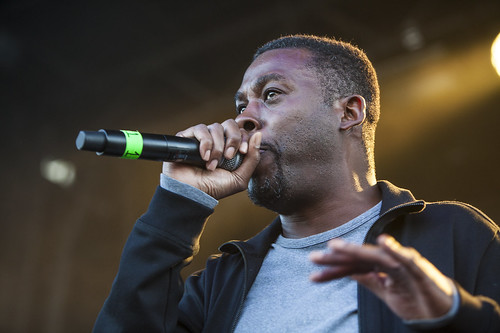 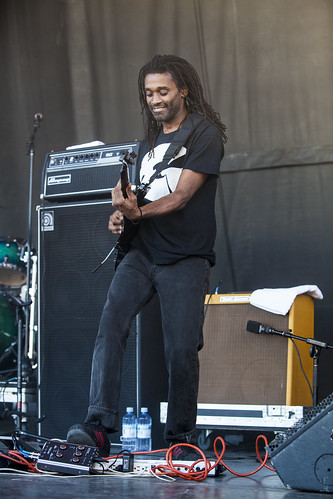 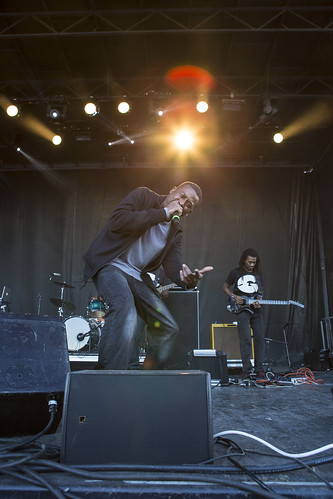 The responsibility of closing out the two day festival landed squarely on the proverbial shoulders of Issaquah's legendary indie rock band, Modest Mouse. After opening with 2000's "Tiny Cities Made of Ashes," fans were treated to three new songs and an impressive selection from the band's twenty year career. Brock's wholeheartedness gave fans a fresh pair of ears for hits like "Float On," "Ocean Breathes Salty," and "The World At Large." Even with a cold, Brock's execution was unimpaired. Described by one fan as "patient zero of hipsterdom," Brock displayed his awe-inspiring skills as a guitarist throughout the set, but the absolute highlight was witnessing his fierce banjo-shredding on "Satin In A Coffin." After "Out of Gas," the band exited the stage. The band's unpretentious attitude had some in the crowd frantically wondering whether Modest Mouse was actually going to end their performance with twenty-odd minutes to go. Playing their biggest hits relatively early on in the set added to the audience's anxiety. But, inevitably, the band returned shortly for an encore of "The World At Large," "Paper Thin Walls," and "The Good Times Are Killing Me." At that point senses began to return to my gravel-decimated feet and I, like many in the crowd, realized that two days of PBR-powered good times were indeed taking their toll. As the hordes exited the waterfront wondering whether next September would bring another Project Pabst, the sound of crunching cans underfoot was all that remained of this year's Project. 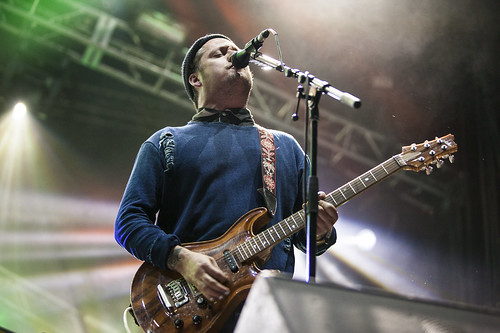 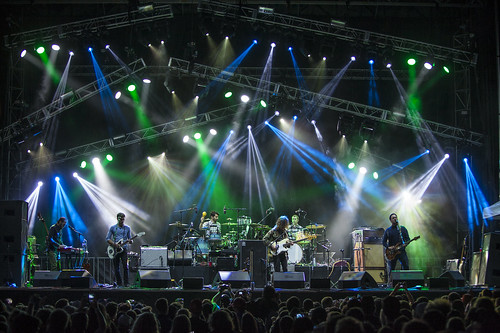 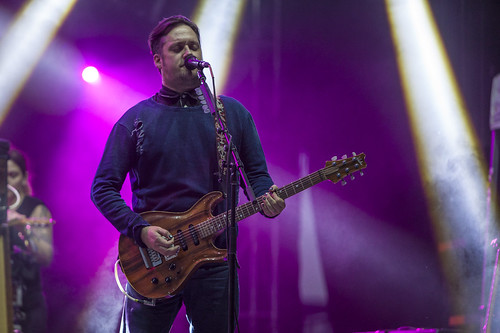 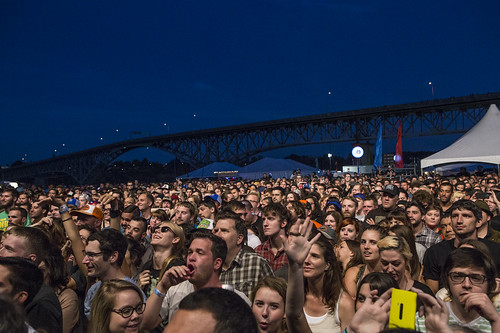 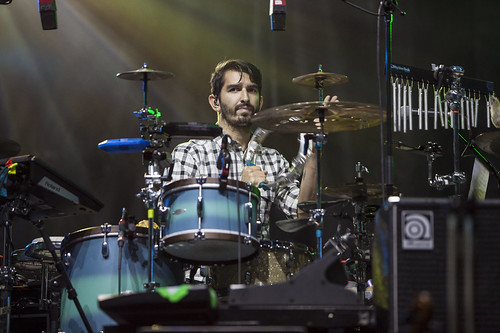 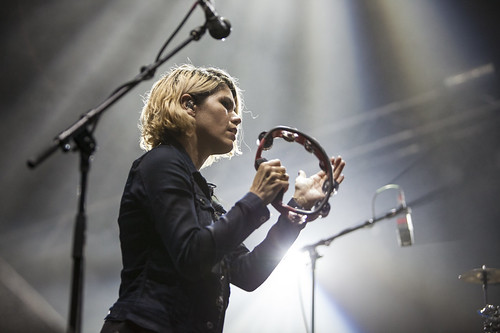 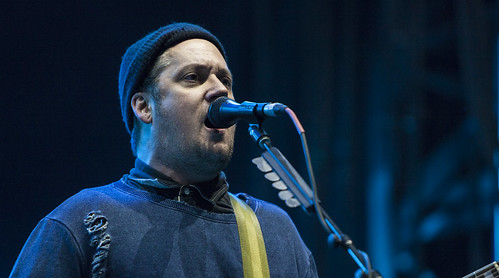 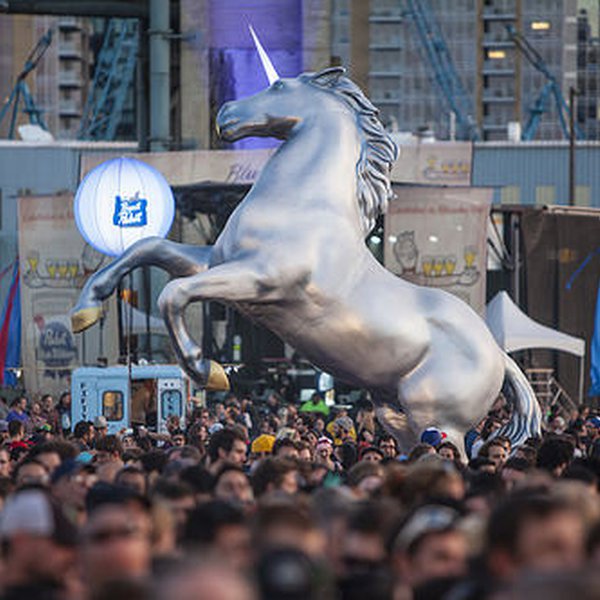 History was made (and relived) this weekend in Portland with the first ever Project Pabst. The festival, a testament to the PDX+PBR love affair, tossed Portland into a beer-fueled time warp. Along with newer acts, Zidell Yards hosted some 80s and 90s greats like Tears for Fears, Violent Femmes, G...