The first of six Optical showcases at this year's Decibel Festival, Kinesthesia ("awareness of the position and movement of the parts of the body by means of sensory organs") proved to be an apt title for Wednesday's event. A musically and visually diverse presentation, the parts of which created something large than the sum of their parts: three different explorations of how visually-oriented performances can interact both with their musical accompaniment and the audience receiving them. 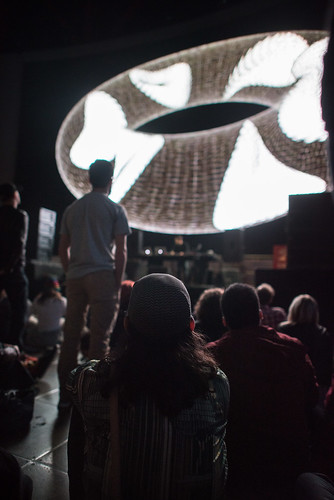 The evening began with the Seattle based artist The Sight Below (Rafael Anton Irisarri), who kicked things off with not a bang, but a whisper. However, as the rest of his performance came to show, that was fitting; it wasn't the loudest or most dissonant parts of his set that were most intriguing, but the ones that were disarmingly without tension. The visual subjects were often familiar sights – predominantly ocean waves and forest scenes – but when flipped in a somewhat distorted, black and white framing changed these images into something more disarming. When Irisarri actually deployed some sparsely-used percussive sounds, they felt discomforting and eerie, markers of pressure rather than rhythm. Sonically, it stood apart from the other two performances that night, but thematically, it felt presciently in the cross-section between the approachable familiar and the challenging foreign. 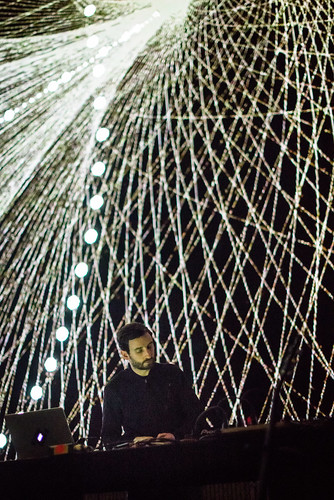 The night continued with the debut of Max Cooper's "Emergence". Anyone who looked at Max Cooper's biography while waiting for the Belfast musician's performance to begin saw that Cooper has quite a broad resume, and he dipped into nearly all of it. A composition with multiple musical sections, each with accompanying visuals, Cooper's performance covered so much musical ground that, without the presence of brief, silent pauses to distinguish sections, it might have been an overwhelming display of Cooper's vision. Instead, this approach showed both his restraint, and his broad range of talent. Although the many of the visuals seemed to come back to a few recurring themes, particularly the relationship between humans and technology and the concept of a body as a machine, Cooper's musical style changed for each of the eight or so sections, ranging from glitchy stop/start beats to samples of gentle piano mixing with synthetic string arrangements to bass-heavy ambience. By the end of "Emergence", Cooper had just stopped short of the point of simply showing off, instead providing a deeply rewarding, surely meticulously crafted performance that displayed many of his talents in one fell swoop. 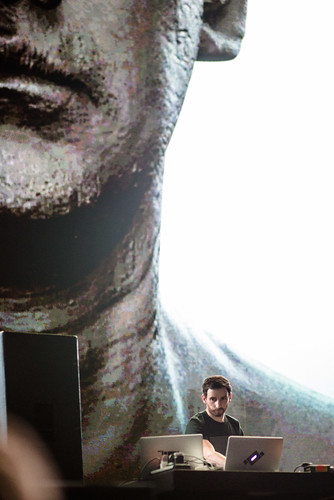 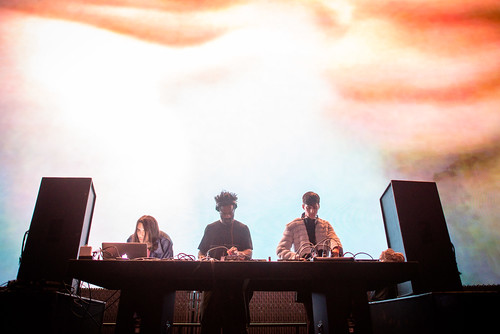 Strictly visually speaking, Arca, Jesse Kanda, and Total Freedom's closing performance featured a CGI baby alien playing piano and a pair of overweight women either fucking or fighting (both?) in slow motion underwater as distorted recordings of Bible verse recitations played in the backgrounds – and that was only the first ten minutes. The Venezuelan producer, Canadian visual artist and Los Angeles DJ played a set that was, at the very least, unforgettable. It sounds, and was, like a lot to process, but the performance was so much disorienting as it was deliberately jarring, providing the audience with just enough stimuli to keep them challenged. Similar to Kanda's visuals, Arca and Total Freedom's music (some of it from the 2013 &&&&& mixtape, and ostensibly some from his forthcoming debut album Xen) had just enough recognizable elements of hip-hop and post-dubstep for the audience to be able to realize just how far they were moving beyond those genre's tropes. The synths were distorted and rippling, beats stuttered out of time until those obtuse patterns became rhythms themselves, and the visuals remained as WTF-worthy throughout as they were at the beginning. As a display of puppies in a field changed to a series of male strippers, the music increased in intensity and fluidity, it felt like the perfect encapsulation of their performance: bizarrely enrapturing but all the more exhilarating because of it. 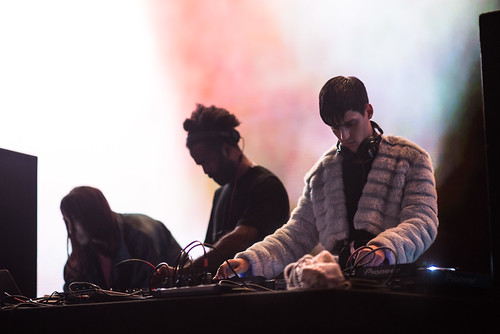 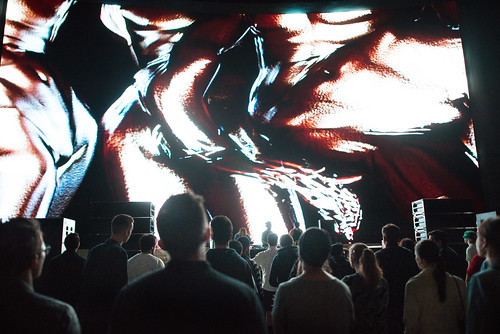 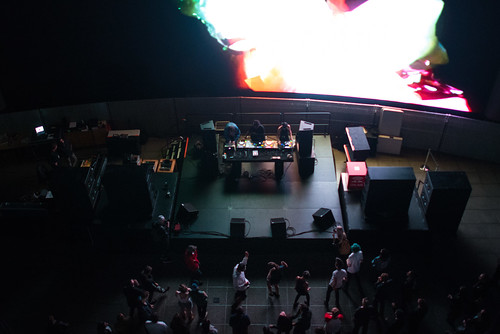 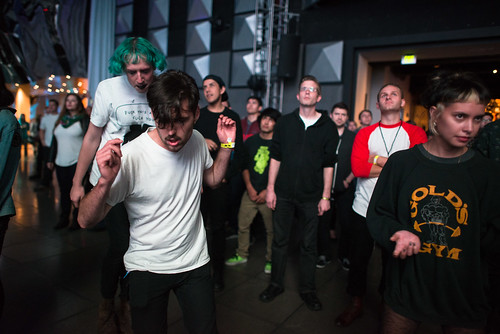 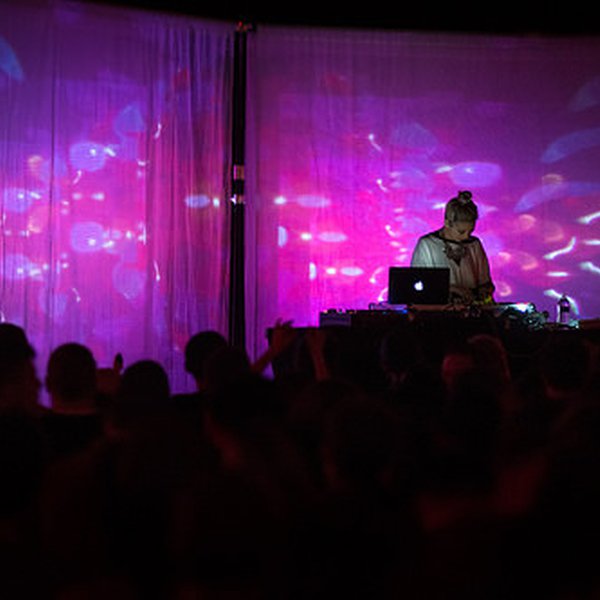 Rhythm and bass: perhaps the only two places of common space in the Venn diagram between electronic pop producer TOKiMONSTA and dark synth pop wunderkind Baths – well, those and Los Angeles, I suppose. Both Jennifer Lee and Will Weisenfeld bend and break the pop skeleton and reshape it into somet... 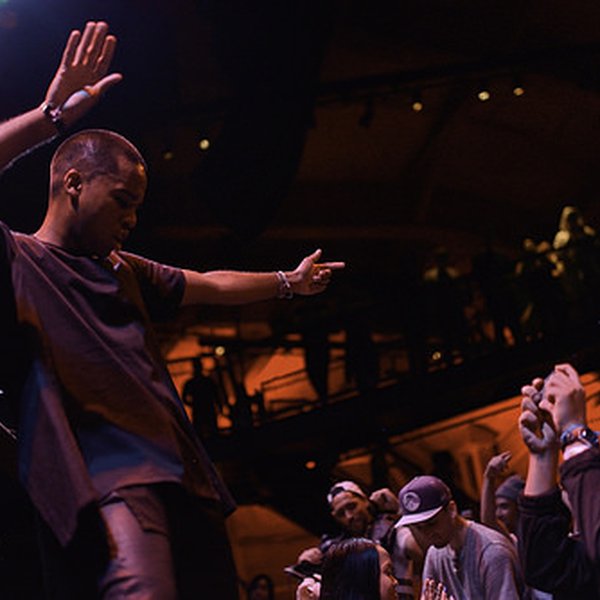 Well, Day 1 of Decibel Festival was just about spectacular. The festival has never been short on prestige, but this year, festival organizers have really put time and effort into carefully crafting some brilliant programs for each venue each night. Each night, Decibel fest attendees can hit their...