Today, we welcome punk legends Redd Kross to the Music Lounge. Jeff and Steve McDonald have been around the block and back, both as Redd Kross and as the Tourists, staying alive through three decades of changes to the scene and still bringing a visceral show to the stage. Last year, they dropped their first record in fifteen years, Researching The Blues, through Merge Records, and they’ve most recently toured alongside Dinosaur Jr.

After growing and performing alongside other punk heroes like Black Flag and Circle Jerks through the 80s and surviving through most of the 90s, Redd Kross took a hiatus towards the end of the decade. In 1999, the death of guitarist Eddie Kurdziel put the future of the band further into limbo. But in 2006, the band slowly returned to the stage, building steam through a string of California dates and then moving out across the country once again. With a batch of new songs fresh out the door, it's the perfect time to see the McDonalds once again and remember the raw power that this band can pack.

As Redd Kross set up for the show, complete with a beat up red guitar, their songs booming and bright, it was clear the KEXP music lounge was ready to fill with sound. Heck, we'd be lucky if the doors stayed on their hinges. "I'm super pleased to kick things off with a bang," said the stylish KEXP DJ Kevin Cole, donning a sharp black vest. "Please welcome Redd Kross!"

“Alllright!” shouted bassist Steven McDonald, in black t-shirt, hand through long brown hair. “Are you ready to do this!” The crowd cheered and just like that the set began. 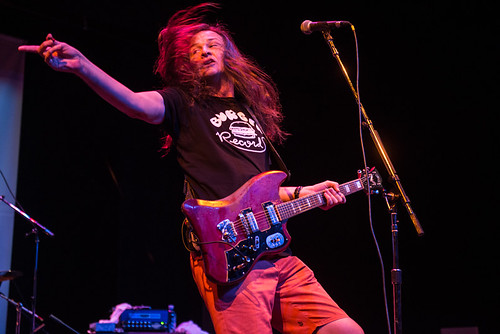 Redd Kross’ punk sensibilities are evident from the get-go, but their clarity was a welcomed surprise. Often, shredding can come off muddled, but not with this four-piece. Not at all. Is it blasphemy to say there was even a bit of pop sensibility to their opening few tunes? Their third song had singer Jeff McDonald saying, “Let’s hit ‘em with this Glam classic, ‘Switchblade Sister’!” And they did! 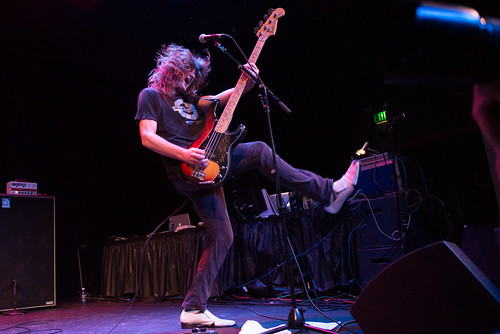 The track “Uglier” followed “Switchblade Sister” – “It’s getting uglier every day,” droned the chorus. The band has a mastery of bringing the tempo down and then immediately ratcheting it up to a grand climax. The up-tempo accentuated by guitar leads and cymbal crashes.

After “Uglier” it was time to dry their faces with towels, get a sip of water, tune a little bit (“Air conditioning makes your guitar go sharp,” said Jeff. “We got to get hotter!”) and continue on. They began to loosen up more, offering more screams, and even hopping around the stage to their own rhythms. From my perch I could see DJ Kevin Cole smiling and nodding his head as he broadcast live from the cool KEXP music lounge. 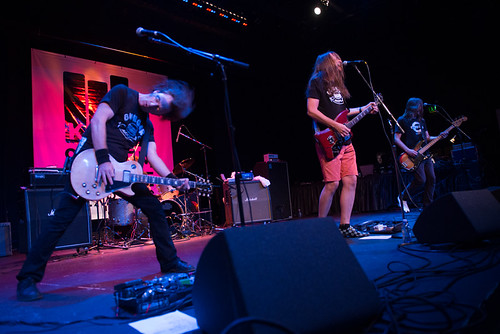 The final third of the set had Jeff, who wore salmon-colored shorts and white-and-black checkered shoes, putting down the guitar and banging a tambourine, gesticulating like David Bowie. The penultimate song of the performance is the first song off their first album, released 32 years ago, called “Linda Blair”. It was the most driving song of the performance and had both McDonald’s singing together in harmonious unison and Jeff soloing with his weathered red ax. 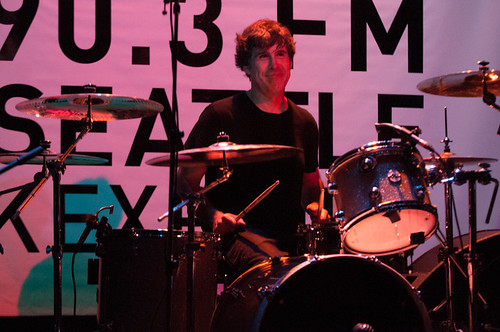 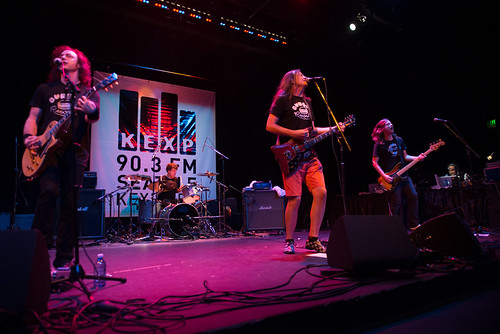 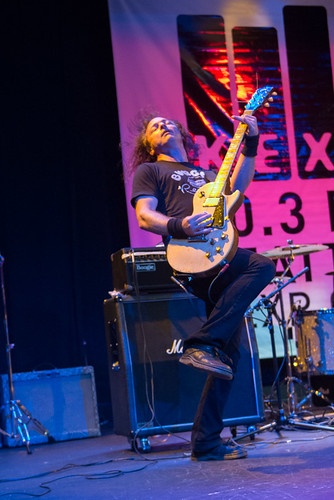 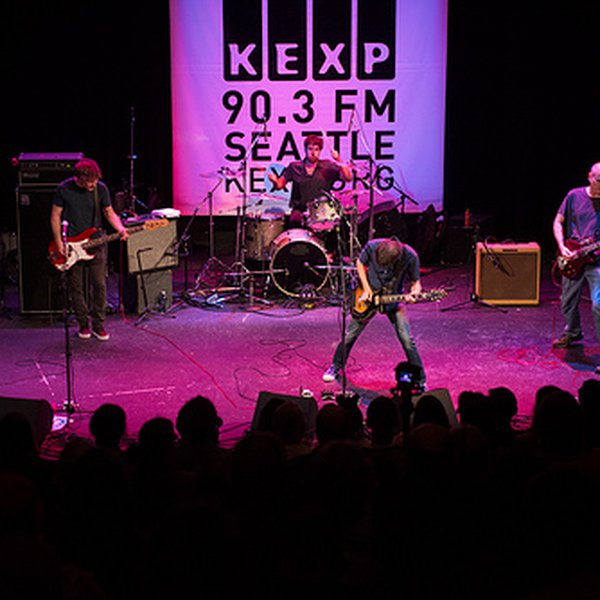 By now most have heard about Superchunk titling their new album I Hate Music, that it is the “dark twin” of their 2010 release, Majesty Shredding. But the only reason to care about an album name is if you like the band that’s naming it. And who doesn’t like Superchunk?? The lively rock group that... 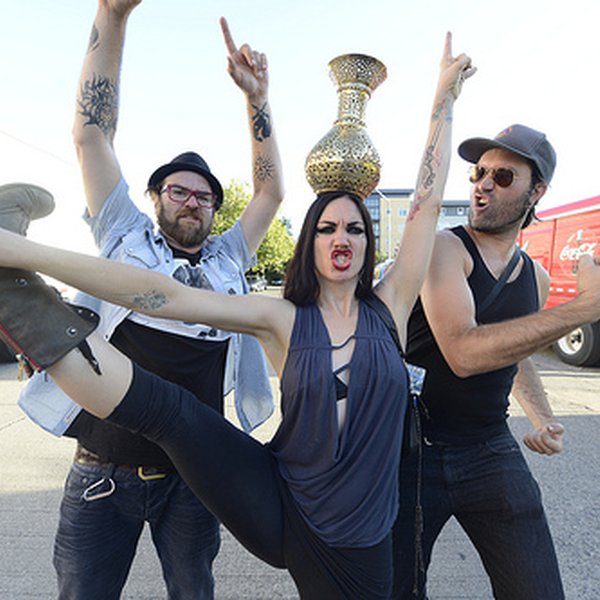 Oakland's Beats Antique debuted in 2007 with their unique blend of the world fusion and electronic genres, performance art and live instruments. Muti-instrumentalist David Satori seamlessly brings a variety of world influences into the mix, from Middle Eastern styles to afro-beat. The group's dan... 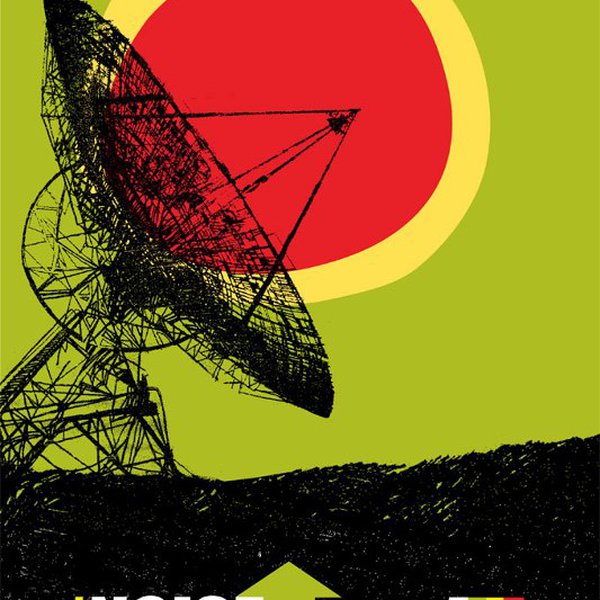 Noise for the Needy Tickets On Sale!

Tickets are now on sale for the annual Noise For the Needy music festival taking place in Ballard on June 20th - 23rd. Get your tickets on the festival's website, noisefortheneedy.org, and get ready to see great Seattle bands performing in favorite Ballard venues like the Tractor Tavern, the Sun...