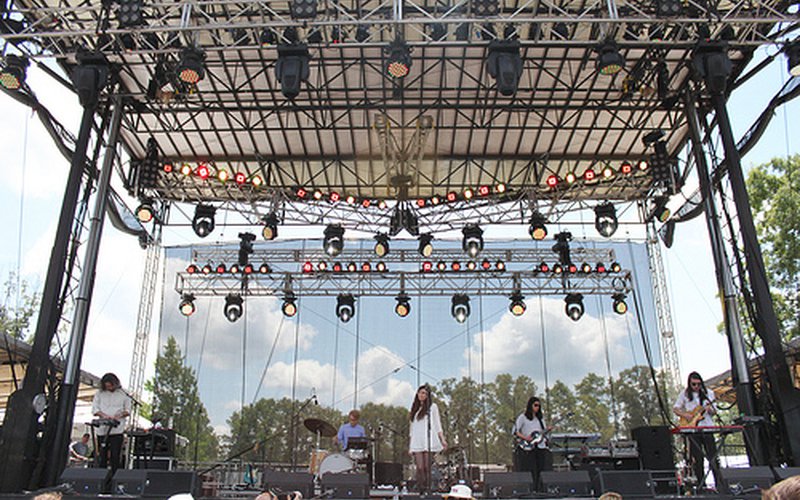 More than any other day, Saturday at Bonnaroo was filled with things that could only really happen at the Farm, among them, Björk's jellyfish facemask thing, R. Kelly entering on a boom crane, a 5k at 9 in the morning (in 80 degree heat), and a moment where Jim James, R. Kelly, Billy Idol, and John Oates were all on the same stage. Things like these explain why "Only at Bonnaroo" has become a sorta mantra at the Farm, because where else would anyone see all of this in one spot? Saturday has the last late night shows of the weekend, and is the last hurrah for anyone who isn't staying for Sunday, but it's on par with every other day in it's own weird way. 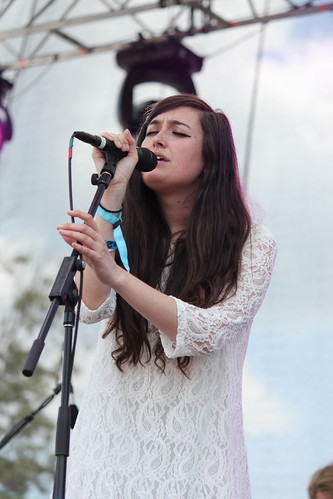 Cults - 12:30 – The upside to Cults’ day-starting set is that their debut album (which is nearly two years old at this point) has aged very well. The downside is that, despite having another album in the can, they didn't play anything but old material, which was a little disappointing. They couldn't fill their hour-long timeslot, but Madeline Follin and Brian Oblivion were as charming as ever for the 40 or so minutes they were onstage. The band was in fine form, and they seemed like they wanted to be there, but it just would have been nice to hear something new. 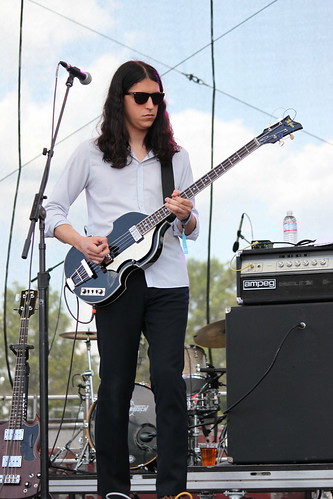 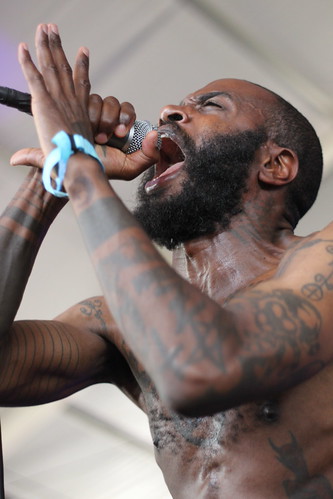 Death Grips - 2:15 – Death Grips’ music isn’t particularly accessible and MC Ride’s lyrics are all-but-unintelligible for anyone who isn’t a diehard, but even without Zach Hill on the drums, Death Grips are still a pretty intense live band. They've been playing to surprisingly diverse crowds (there were at least four women wearing sorority shirts jamming out in the crowd), and every time, they attract a legion of fans that rush the pit while screaming for the band's entire hour onstage. The set was completely devoid of banter or even any breaks in between songs, but that's the Death Grips way: hard, fast, and completely unconventional. 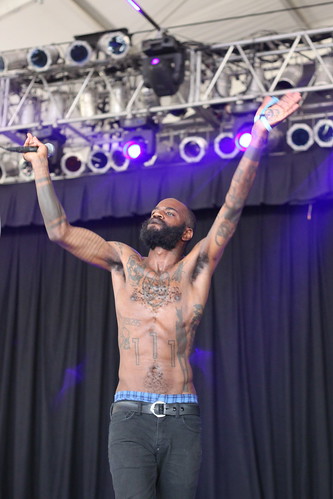 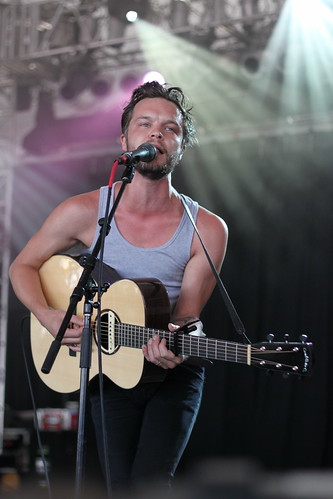 Tallest Man On Earth - 3:35 – Tallest Man on Earth was scheduled against another acoustic guitar-slinging European (Frank Turner), but unlike the Englishman, Kristian Matsson delivered his anthems all by himself. That's not a knock on Frank Turner, but a tribute to how engaging of a performer Matsson is. On his records, his strength lies in his ability to create a warm intimacy. Conversely, his live performance relies less on intimacy than it does on energy, which Matsson has in droves. He's been a festival staple for a while now, and it showed on Saturday afternoon, with the songs from There's No Leaving Now, his most recent album, drawing the biggest cheers. Even more than the crowd, Matsson himself seemed to be having the most fun, which is impressive for a guy who's been touring this show for over a year. 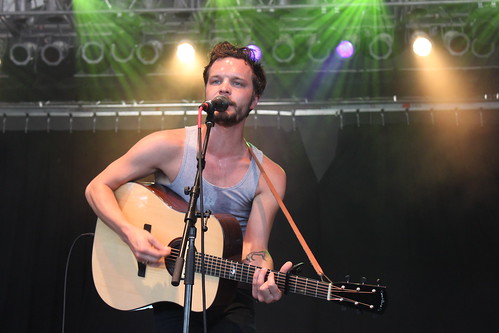 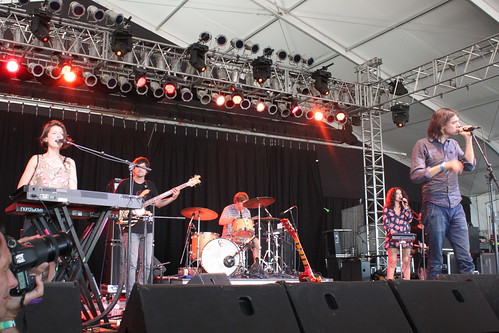 Dirty Projectors - 5:15 - Since the Swing Lo Magellan lineup fell into place last summer, Dirty Projectors have essentially been an unstoppable live force, sound mix permitting. Leader Dave Longstreth leads the band through meticulous rehearsals, and it shows, because as many intricate vocal harmonies and instrumental breakdowns as there were in their set, the band didn't miss a single one. Furthermore, Longstreth and Amber Coffman have become far more comfortable being onstage since the tour's start. Since Angel Deradoorian's departure, Coffman has eased into her role as Longstreth's onstage foil, grinning widely the whole time, and Longstreth - not a musician many would expect to work the crowd - even called for the women in the audience to go up on someone's shoulders for "See What She's Seeing". Leaning heavily on Swing Lo Magellan material, Dirty Projectors' Saturday afternoon set was something that they would have never been called a few years ago: crowd pleasing. 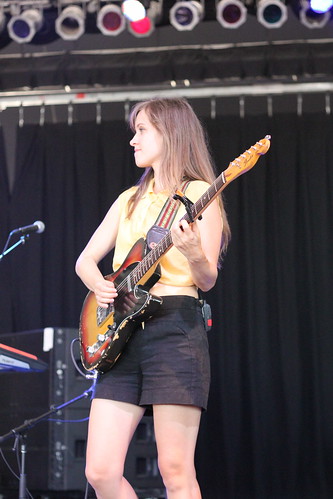 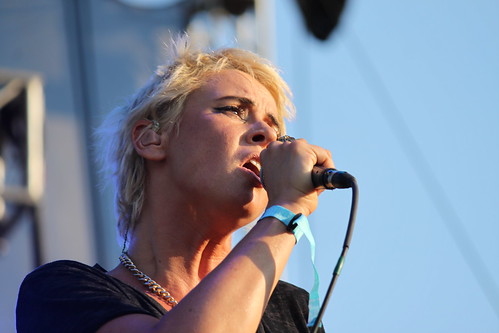 Cat Power - 6:15 - Although she started late, Chan Marshall was quite lucid (as opposed to her infamous inconsistency as a performer in the 2000s) and bold with her set. Marshall embraced electronic music influences on her most recent album, Sun, which was a far cry from the whiskey-drenched torch songs that earned her stripes, and she must have taken that reinvention as an opportunity to rework all of her old material as well. Opening with an almost-unrecognizable "The Greatest", Marshall sparingly pulled out her older material, but when she did, it was fascinatingly reworked. Even more surprising was the vibrancy of the Sun material; it's not that the songs are boring on record, but they're particularly danceable in a live setting, another sharp left turn for Marshall. 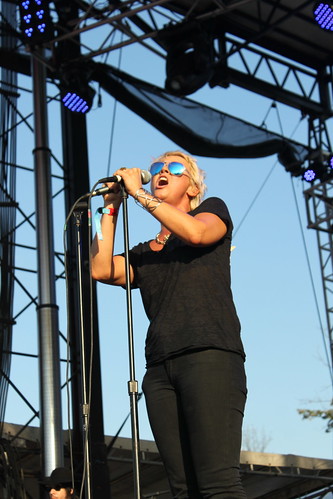 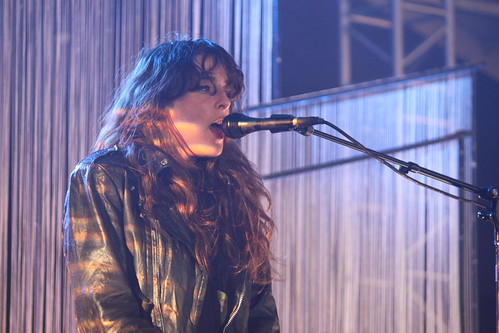 Beach House - 7:00 - Although Beach House would have made a great late night alternative to R. Kelly, they were scheduled as the sun set, which is the next best thing. Like the xx, Victoria Legrand and Alex Scally's music is quintessentially nocturnal, but the setting sun added an unintentional visual aspect to the duo's mesmerizing performance. Drawing mostly from Teen Dream and Bloom, the band's two strongest albums, their set brought a level of soothing calm to the busy festival, drawing in people who were just looking to rest for a minute and keeping them there for the whole set. Although the schedule wasn't in their favor on Saturday (they were scheduled against Bjork too), it was clear that Beach House is a group at the top of their game, and it's going to be interesting to see what their next move is. (Hopefully, it will be at a nighttime show.) 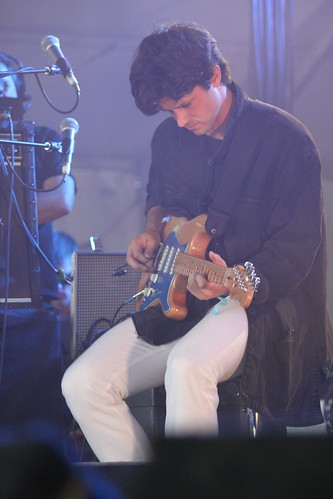 Björk - 7:00 - Relative to most of the other bands on the What Stage this weekend, Björk drew a small crowd. However, everyone who was at Björk's set was there to see Bjork (and maybe only Björk), and the Icelandic songstress delivered a visceral and emotionally riveting set that certainly stands as one of this year's highlights. Accompanied by a keyboardist, drummer, and a dancing choir dressed in blue robes, Björk emerged onstage wearing a jellyfish/bubble/Koosh ball-looking mask that made her famous swan dress look modest in comparison. Unusually for this tour, the setlist leaned less on material from the so-so Biophilia, which meant classics like "Hunter", "Hyperballad", and "Pagan Poetry" could emerge as the soundtrack to the nearly-religious experience that the adoring crowd was having. The one-two finale of "Declare Independence" and "Nattura" (with pyrotechnics!) was a thrilling end to her rare appearance in the Southeast, but for those that were close enough to see it, the giddy smile on Björk's face as she said "Thank YOU Ten-Ess-See" was the true highlight. Commanding the stage with a demeanor that was raw and emotive, Bjork brought a spectacle to the Farm that not even an over-the-top performer like R. Kelly could top a few hours later, and probably won't be topped on Sunday. 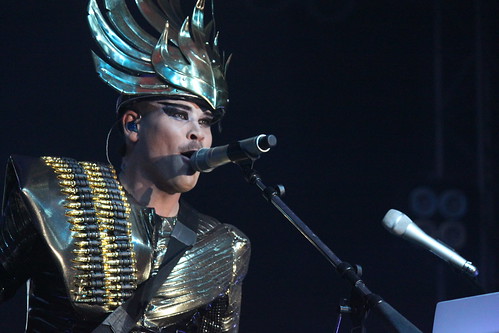 Empire of the Sun - 2:00 - If Björk was the day's biggest spectacle, Empire of the Sun was a close second. Although they didn't have a dancing choir, they did have four dancers, a couple costume changes, light up guitars, and a bevy of well-received new material. Like their Sasquatch performance, the band's high energy (there were almost no pauses in between songs) and relentless light show made them a good choice for their very late timeslot. Mirroring the EDM rampage of Boys Noize one tent over, Empire of the Sun was a non-stop dance party that ended only a little while before, perhaps appropriately, the sun came up. 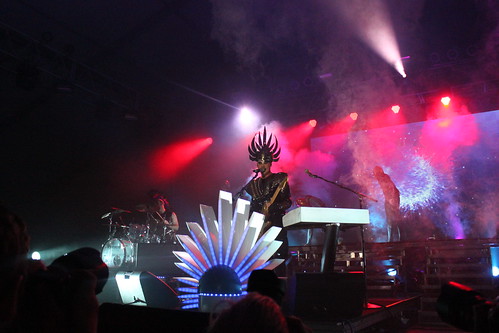 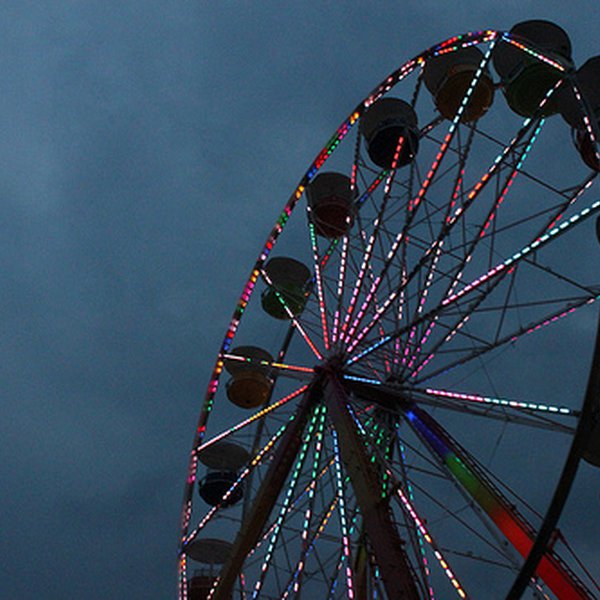 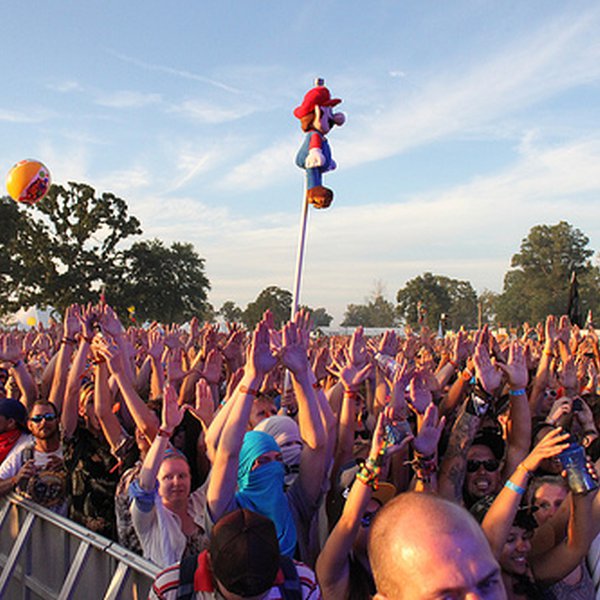 Bonnaroo started its first full day on Friday, but the audience was more than warmed up from the night before. The day would mark the weekend's first headlining performance (Paul McCartney), the first you-had-to-be-there moment (Wu-Tang's surprise appearance at the hip-hop Superjam), and the week...