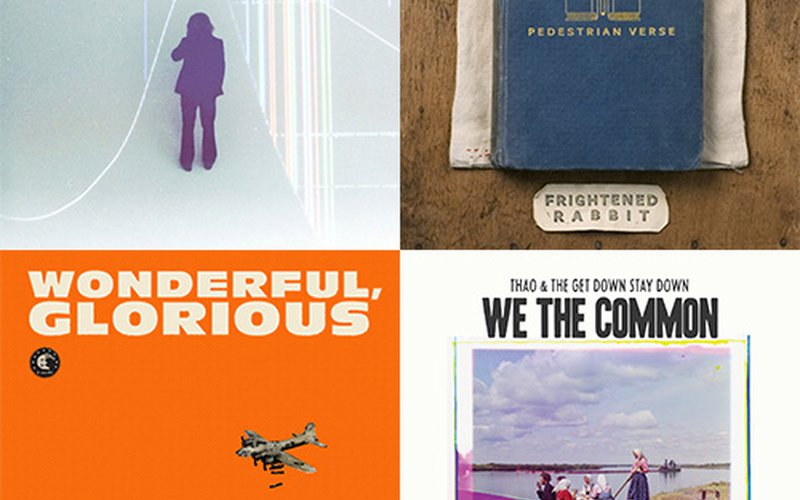 Damn, 2013, you are looking good! You just keep hitting us week after week with one killer list of new releases after another. This week, there's no way we're not going to run out to pick up the latest from long-time KEXP favorite Frightened Rabbit. As if there was any doubt that this would land high on KEXP's regular rotation, our Music Director, Don Yates, commended it for being "another emotionally stirring set of anthemic folk-pop, with a huge, densely produced sound combining reverberating guitars and urgent rhythms with Scott Hutchinson’s impassioned vocals and dark, brutally honest lyrics." KEXP listeners will also want to pick up the solo debut from My Morning Jacket frontman Jim James, whose ambitiously titled Regions of Light and Sound of God "is a spiritually minded set of soulful, expansive space-pop inflected with R&B, psych-rock, folk-pop, Arabic music and more"; and the 10th album from EELS, who seem to be putting out only one album this year, but it "ranges from grimy, fuzzed-up rockers with pounding beats to spacious, atmospheric ballads" and features in its bonus edition packaging songs from a past KEXP in-studio! And speaking of in-studios, Thao and the Get Down Stay Down, whose fourth album, We the Common, is out this week, will be stopping by KEXP for a live performance on Friday, February 8, at 1PM, during their current tour of record stores and other free venues. The latest from Thao Nguyen and her band "is a sparkling set of playful folk-pop using a variety of colorful acoustic and electric instrumentation for a vibrant, sunny sound on sharply crafted songs that show Nguyen developing a stronger politically charged edge to her songwriting."

If you were reading pretty much any music blog yesterday, you'll know that My Bloody Valentine surprised fans over the weekend with the sudden release of their first album in a couple of decades! While their somewhat self-titled album, m b v, is "a bit more subdued and downbeat" then their 1991 classic, Loveless, "it also finds the band expertly recapturing their classic loud and hazy sound while also subtly expanding upon it with churning waves of distorted (and not-so-distorted) guitars, atmospheric keyboards, hypnotic rhythms, ethereal, half-buried vocals and dreamy melodies."

Other new releases you'll want to check out this week come from Hyperdub stars Darkstar, whose latest finds the space where prog rock intersects with hip-hop; singer-songwriter Matt Pond, who drops the "PA" and adds a more direct approach to his storytelling on his first album for BMG; Nashville-via-Colorado Springs artist Winston Yellen, a.k.a. Night Beds, whose debut "is a beautifully crafted set of atmospheric folk-pop combining a warm, spacious sound with wistful melodies and Yellen’s gorgeous vocals reminiscent of Jim James and Ryan Adams"; New Zealand-bred songwriter/guitarist Ruban Nielson and his Portland-based project Unknown Mortal Orchestra, whose sophomore effort "is a fine set of lo-fi psych-pop inflected with soul, funk and jazz"; and iconic British folk-rocker Richard Thompson, who after a series of sprawling collections, sets down "one of his finest latter-day records, with a muscular, often-edgy sound injected with plenty of complex and fiery guitar solos, though there are also some gorgeous bittersweet ballads. He’s also in fine lyrical form, ruminating over lost love and working-class angst with prickly precision on songs balancing acerbic wit with heartfelt poignancy."

There's a lot more waiting for you in record stores today, so drop what you're doing and head over to one (or, schedule the time first). But don't go until you've sampled all of these tunes from recommended releases out this week: 2013 continues to bolt out of the gate with another solid week of new releases. With the long awaited followup to their well-received 2009 debut, Local Natives top our list of must-buys. Hummingbird finds the Silver Lake, Los Angeles, group pushing into new territories of song structure, challengin…